Feminism in a Doll House

Feminism in A Doll House In Henrik Ibsen’s A Doll House Nora Helmer is a prime example of a woman’s role in the 19th century, that being that she was more for show than anything else. Nora’s husband, Torvald, treats his wife like a living doll and uses pet names for her rather than her actual name further establishing her position as nothing more than a toy. For Torvald. Nora’s purpose in her own home is to be subservient in a mental capacity as her husband often regards her more as a child than an adult by punishing her for simple, silly matters such as eating sweets.

This treatment, however, is not new for Nora as it is revealed that her father treated her quite similarly. When the play opens Nora has just returned from Christmas shopping and we are given a description of her home, “A comfortable room, tastefully but not expensive furnished. ” (Doll act I).

Further explanation reveals details which tell the audience that the financial situation for Nora and Torvald is good. As with most things the Helmer home is nothing more than a facade for Nora.

One author says, “ [T]he house is a mere container, or doll’s house, for Nora, who spends her time entertaining or nervously accommodating (as her nickname “the squirrel” implies) her demanding husband — rather than decorating, designing, or even “taking charge of” her own life” (Connie Pedoto). It’s from this that the reader first gets the idea that appearance means a lot to the Helmer family.

Early on it is made very evident through the conversation with husband that she is meant to be the face of their marriage.

Ibsen introduces the fact that Nora is not allowed sweets; something that seems strange in this day and age, but in the 19th century was not uncommon. It shows the power a husband had over his wife in that time as well as the submissive behavior women adopted in order to have a proper marriage. Ibsen also reveals that Nora and Torvald’s children have been raised by a nanny their whole lives further establishing Nora’s role as a trophy. Because Nora has been absent in the role of raising her children it is safe to say that she did not have the ability to be a proper mother, ot because she did not love her children, but because she never had the chance to be a proper mother. When she is showing Torvald all of the wonderful toys she has purchased for their children it is obvious that her excitement stems from the fact that it is the only thing she can do in order to show her love to them. This can be compared to Nora’s belief that money fixes everything and this is shown when the author writes “Yes, yes, it will. But come here and let me show you what I have bought. And all so cheap!

Look, here is a new suit for Ivar, and a sword; and a horse and a trumpet for Bob; and a doll and dolly’s bedstead for Emmy,–they are very plain, but anyway she will soon break them in pieces. And here are dress-lengths and handkerchiefs for the maids; old Anne ought really to have something better” (Doll act I). Though the Helmer’s have not always had money to spend in such a manner it is obvious that Nora has taken this newfound fortune as a way to express her love and gratitude to those around her through gifts rather than words or physical affection.

When Mrs. Linde is introduced the readers are given a different view of women in this society. Nora must hide every crime she has committed, whether that be the forgery of her father’s signature or sneaking a macaroon, because she is married, while Mrs. Linde no longer has a husband to answer to. Mrs. Linde is treated quite differently than Nora as she is widowed and because of that the expectations that are placed on married women no longer apply to her.

She is given the opportunity to work at a bank in the position that was once held by Krogstad. This is surprising as during this time it was the peak of women’s suffrage and women were not usually allowed to hold positions that a man did let alone replace one. When Nora sees the freedom that her childhood friend has acquired upon losing her husband the resolve she had in keeping her secret about the forgery begins to wane though the audience does not see this until much later.

Torvald’s treatment of Nora may seem harsh in comparison to the relationship between husband and wife these days, but at the time it was very common. This is why Nora plays along and enjoys the little games her husband plays with her. At the end of the play Nora’s misdeeds come to light and she is forced to admit what she has done. Trovald reacts as expected and verbally abuses her before deciding that the matter should be forgotten, all is forgiven and they will go back to their normal lives.

It is at this point that Nora realizes that the life and marriage she has been fighting so hard to protect by keeping her secret from coming to light is beyond saving. Though she this is not the first time she has defied her husband this is the first time she has done so without trying to conceal the act. When she decides to leave it is obvious that it is a shock to Torvald, whom has always believed his wife to be obedient, especially when he gives her the chance to forget all about it.

It is also shocking for the audience as up to this point Nora has made it quite clear that she believes she would die without the financial support of her husband. Nora was a typical wife in the 19th century. Nothing she did was uncommon and the fact that she came to see the truth about her marriage speaks volumes about the times and political issues surrounding women in those times. Joan Tempelton, author of Ibsen’s Women, says “Nora’s doll house and exit from it have long been principal international symbols for women’s issues” (111).

At the beginning of the play the audience would never expect Nora to make such a bold choice as to leave her husband and children, but as other characters are introduced their help or, in Krogstad’s case, blackmail leads her to the decision that she and her family would be better off without her as she has realized her true role in her marriage which is that she doesn’t have one. She is nothing more than a living doll in her own home and it took her husband discovering the truth, that his wife is no as obedient as he believes, to bring her to this conclusion.

Mrs. Linde is the opposite of Nora. She shows the freedom s of a woman not married. Though times are hard for her as she was left with no money it is obvious that she prefers it that way. For Mrs. Linde marriage was financial security, but now that that has been taken from her she takes it upon herself to find a job and uses the friendship she has with Nora, whom is still married and subservient to her husband, in the hopes that she will be able to coax Torvald into getting Mrs. Linde a job.

Nora does this as a favor to a friend, but when Krogstad threatens to reveal the truth about the forgery Nora is quick to beg Torvald not to give Mrs. Linde the position that formerly belonged to Krogstad. She does his because, as a woman, she knows men to be the more dominant sex and fully expects him to go through with it. It is surprising to see Torvald deny Nora’s request, not because she is his wife, but because Mrs. Linde is a woman and it was no very common in the 19th century to be chosen for a job over a man.

Feminism is a large part of Henrik Ibsen’s A Doll House and perfectly portrays the role of women in the 19th century. Through Nora’s journey of self-discovery she realizes that her father had treated her like a delicate china doll just as her husband does now that she is a full grown adult and at the conclusion of the play she takes it upon herself to break from that cycle and become her own person. Like Mrs. Linde Nora takes this opportunity to become her own person and frees herself from her controlling marriage.

Feminism in a Doll House. (2016, Oct 26). Retrieved from http://studymoose.com/feminism-in-a-doll-house-essay 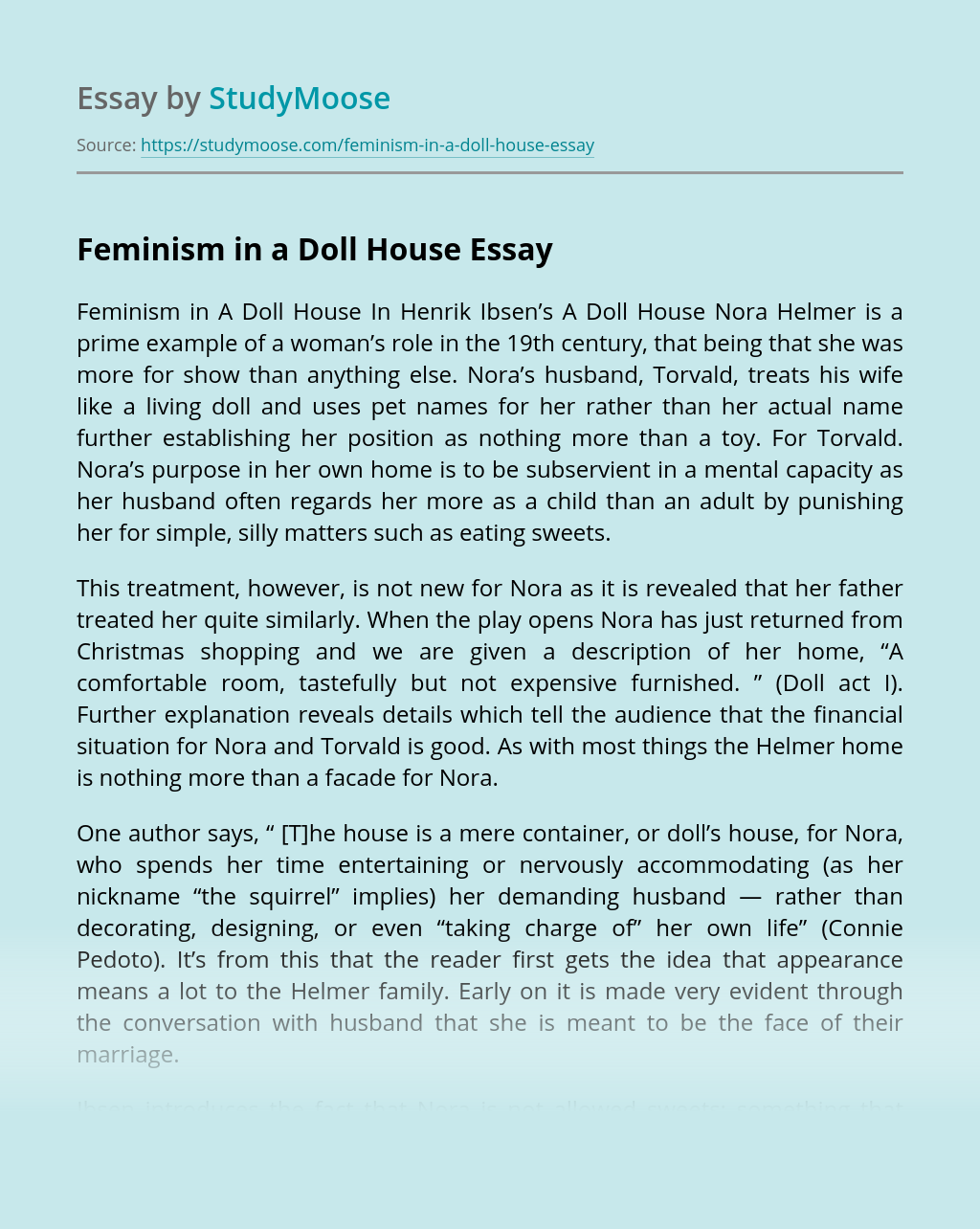 Don’t waste time
Get a verified expert to help you with Feminism in a Doll House
Hire verified expert
$35.80 for a 2-page paper
Stay Safe, Stay Original