Are being lower in status and weaker sex lead to violence and abuse towards women?

Nowadays, feminism and gender equality are still an issue that will draw attention among the society. Women status is a complex issue and a hard-to-define subject. Overall, the rights and status of women have improved considerably in the last century. According to Macmillan English Dictionary (2007), “status” carries the meaning of someone’s position in a profession or society especially when compared with others. I strongly agree that women in this era are still considered as human beings who are lower in status and being the weaker sex compared to men that lead them to being easily abused by men.

Don't use plagiarized sources. Get your custom essay on
“ Feminism and gender equality ”
Get custom paper
NEW! smart matching with writer

In this essay, I will discuss how women are treated as property and how they suffered from various forms of physical violence and sexual abuse that prove they are lower in status compared to men.

To most of the men, female are often regarded as property.

Women’s status in each society and culture varies in different ways around the world.

In examples female genital mutilation which is common in Nigeria, Togo, Egypt and Somalia is existed which is the female will undergo a surgical remove of clitoris (Boyle, 2002). It is the means of social control that shows the selfishness of men. The reason some of the female perform this kind of surgical is husband hope their wives be virgins before marriage and remain sexually faithful after marriage. In my opinion, the virginity of a female should not control by using surgical method that had restricted women’s rights.

For me, genital mutilation is unnecessary to be performed although virginity of a female is admittedly crucial for them before marriage. This is because there are other ways and means in order to control a female’s desire to have sex. In the event of this, why men did not have to perform the same kinds of operation to control them have sex before marriage? This has been shown that women are lower in status and powerless to voice as the surgical is consider as a part of their culture. Women are regarded as properties have to bear with the pain during the surgical and the effects after the operation either in the aspects of mentally or physically. Female genital mutilation is reportedly not practised in Malaysia and does not have any law on it. (Inter-parliamentary Union, 2010)

In reality, men always consider as the stronger sex that somehow the issue of physical violence against women had occurred. Gender equality is highly significant for the world to function well. When one sex believes that its strength or position is far better than the other then the issue of inequality arises. Domestic violence is one of the examples that testified women are lower in status and powerless than man. Sometimes, men abuse women to show their men’s power and their higher status than women. This is because women usually dare not to issue after they receive abuse form men. In my standpoint, women need to face the situation head on and be independent. They must realize what happened to them are inappropriate. Abuse from men to women should put an end mark from now onwards therefore clarified that women are not lower in status and powerless to achieve their women’s rights. In Malaysia, Domestic Violence Act is one of the laws that protect women’s rights when they get abused by men. Nevertheless, the Domestic Violence Act criminalizes violence against women, but only if you are a married women.

Furthermore, the case of dowry death is deemed as physical violence has proved to be lower the status of women.

The practice of dowry is glaring in parts of India where the status of women is less important than dowry. Dowry normally means it is given during the marriage to the son-in-law parents either in the form of cash or gifts. There are also brides who are constantly harassed physically or mentally for failures to bring sufficient dowry. From my point of view, culture is the main issue that have an abstruse impact on women. It is the culture that encourages women to be the weaker sex. People have passed down attitudes and traditions since the first established society and the sexist sins of their ancestor whom stereotyped women as lower in status and weaker sex.

On the other hand, sexual violence is one of the issues that women are being exploited as the weaker sex.

One of the examples of sexual violence is date rape. Date rape is a crime in which the victims are forced in to having sexual intercourse with someone they are familiar with. According to Hoebel (2002), one of the biggest risks from a male to a female is date rape. A research has shown that, one in four women will be raped in their life time (Nancy, Sylvester, Priscilla & Ana, 2001). This is a very scary, yet true statistic. In my viewpoint, rape is looked as a crime of assault. It can causes physical and mental injuries to victims. No one should ever force someone else to have sex against their will. That is rape! From Hoebel saying, I can conclude that men frequently assumed women as the weaker sex thought of they could easily do whatever things they want towards women including sexual violence. Davis Thomas and Camille Paglia (2006) believe the world will always contain men who use their advantage of strength to harm women. For me, I seriously hope that women need to be strong as well as be educated what date rape is. Therefore, more women will come out and report the incident.

Moreover, there are some issues like prostitution which is also a kind of sexual abuse to women, have been around for thousands of years and will never go away.

Hence, it is for this reason that, as Barbara Walter (2003) said, “Prostitution is a world that is here to stay, like it or not it is time to make the best of it”. Men exploited women in the prostitution field assuming that sex for money is legal. There are some cases which women are forced by their husband to sell their body in order to earn money. This scenario has shown men just only care about the profit and rather to sacrifice their wives in sex traffics. In my perspective, a woman must have the right, under constitution, to not only sell her property, but to do it in privacy. Women commonly regard as the lower status group ought to fight for their rights but not just let themselves being exploited by men. Prostitution is illegal in Malaysia, however, laws banning prostitution remain largely unenforced.

To conclude, there are several issues that had shown that women lower in status and being the weaker sex easily exploited by men. Men feel they are superior than women always treat women as property that those females have to perform surgical to please the superior one. Men often use violence means to try to overpower women. Many women also feel that they are lower in status and regard as the weaker sex usually exploited in sexual field which considered as sexual violence. Education is one of the methods that can prevent violence and abuse in women. People must look ahead to educate the next generation and instill in them new ideas in order for intellectual reform to occur not just for women, but for all people. 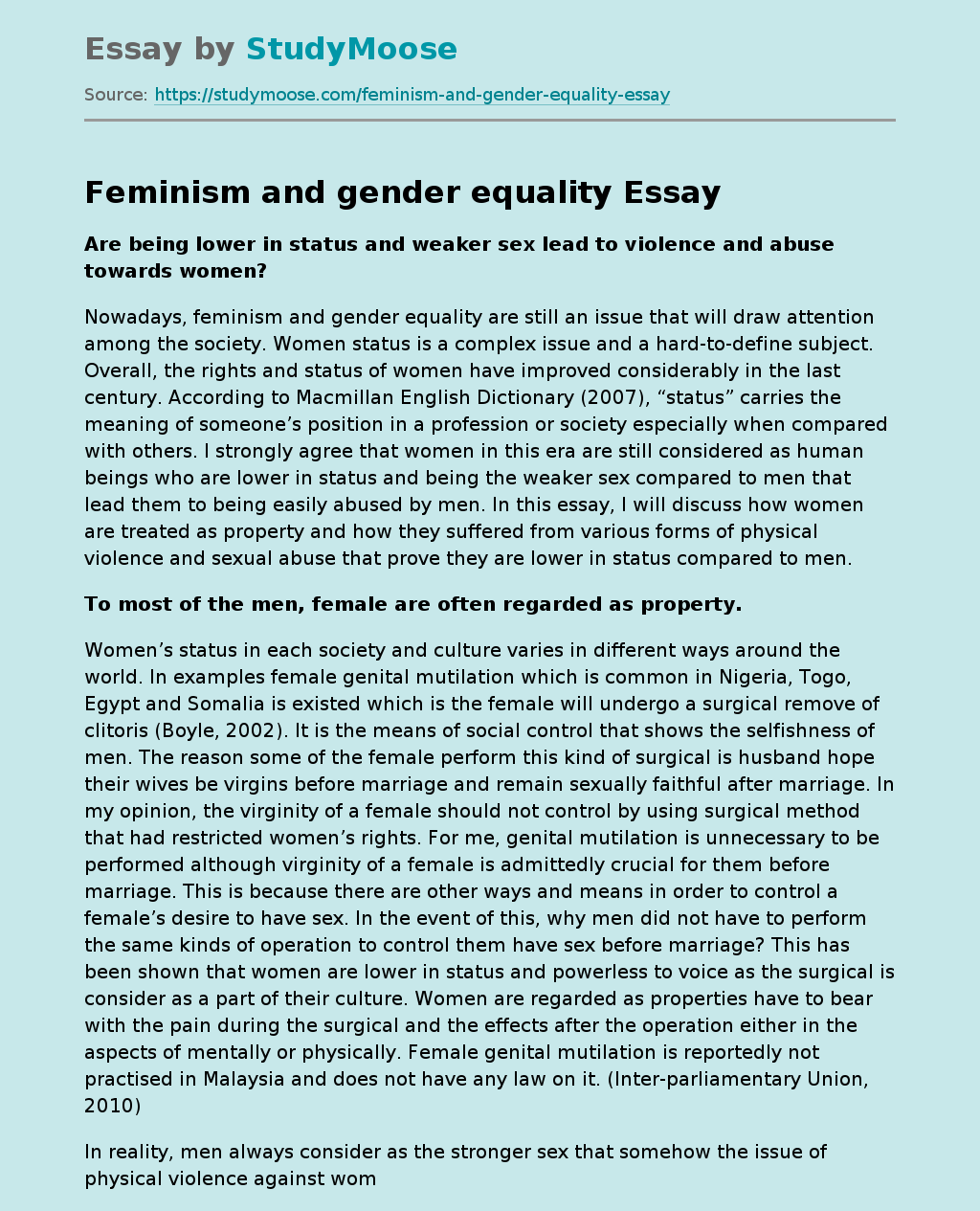