During the late 1800’s and early 1900’s there were many struggles throughout society that depict discrimination. Judgment against gender, race and class all through working and social society were common. Many authors have captured the vast colors of discrimination and feminism throughout this era, especially John Steinbeck. Steinbeck is but one author who represents the feminist perspective in his short story The Chrysanthemums. Upon the first entrance of Elisa in “The Chrysanthemums”, written by John Steinbeck in 1938, she is found in her garden.

Don't use plagiarized sources. Get your custom essay on
“ Feminine Perspective Essay the Chrysanthemums ”
Get custom paper
NEW! smart matching with writer

Her garden is explained to be fenced in, “wire fence that protected her flower garden from cattle and dogs and chickens. ” (Steinbeck, para 2, 1938). This fence is clarified to be there for her protection from wandering animals, this could also be interpreted as the imprisonment, if you will, of Elisa. Not to be confused with a prison for Elisa herself, as to keep her from roaming. This type of imprisonment is meant to secure her talents and make sure that her womanly use of gardening skills stick strictly to the walls of her enclosure.

This is flawlessly established by Henry, her husband, in their conversation of the orchards. “I wish you’d work out in the orchard and raise some apples that big. ” Her eyes sharpened. “Maybe I could do it, too. I’ve a gift with things, all right” (Steinbeck, para 3, 1938). By stating that Elisa should and would be great working the orchard with “planting hands” (Steinbeck, 1938), but can’t do to her status as a woman, therefore capturing her talents in this fence.

The role of the men in this story is portrayed as rough and tumble; classic rugged cowboys set out on a cattle drive.

The fact that these men Henry and Scott, are to run a cattle drive to embark on such a dangerous adventure, shows their daring, manly braveness. It is apparent that Elisa, stereotypically represents a house wife who stays home and tends to her chores, while her husband runs their ranch and cattle drives. An added flavor of men’s freedoms was sprinkled in with the arrival of the travelling salesman. He is a man, therefore shall roam as he pleases, as defined in his travels over his six month journey. “I go from Seattle to San Diego and back every year. Takes all my time. About six months each way. ” (Steinbeck, 1938).

A trip of this magnitude during this era was seen unfit for a woman to endure; as if a tender, weak woman could not withstand the treacherous life on the road as a strong man could. During their conversation with the strange salesman, Elisa clearly exhibits leeriness of this lower classed, homeless if you will, man who approaches her. Evident in sly sharp remarks, Elisa proclaims “Nothing like that. ” Her eyes hardened with resistance. ” (Steinbeck, 1938). Elisa clearly sees herself as better than this man, not just showcasing her disapproval of his status but also applying pity on this hardworking fellow.

Steinbeck writes “His voice took on a whining undertone”, and “Maybe I won’t have no supper tonight” (Steinbeck, 1938). The travelling man layers his pity on top of Elisa by repeating the fact that if she doesn’t give him work, he will starve. This shows the lower class preying on the upper class; they have more, therefore must have more to give. “At the back of the house she dug in the can pile and found two old and battered aluminum saucepans. She carried them back and gave them to him. “Here, maybe you can fix these. ” (Steinbeck, 1938).

Elisa feeds off of his pity, to pour her own pity by finally finding a garbage pan for the man to remedy. Drawing all these signs of discrimination and feminist perspective, Steinbeck has painted a perfect ball of judgmental opinions so often shown in this era. The short story “The Chrysanthemum” (Steinbeck, 1938) has equally conveyed each side of gender and class discrepancy during a time of strong judgment and order of life. The stories of Steinbeck and many others are a major stepping stone towards the path of feminists and the women’s suffrage movement. 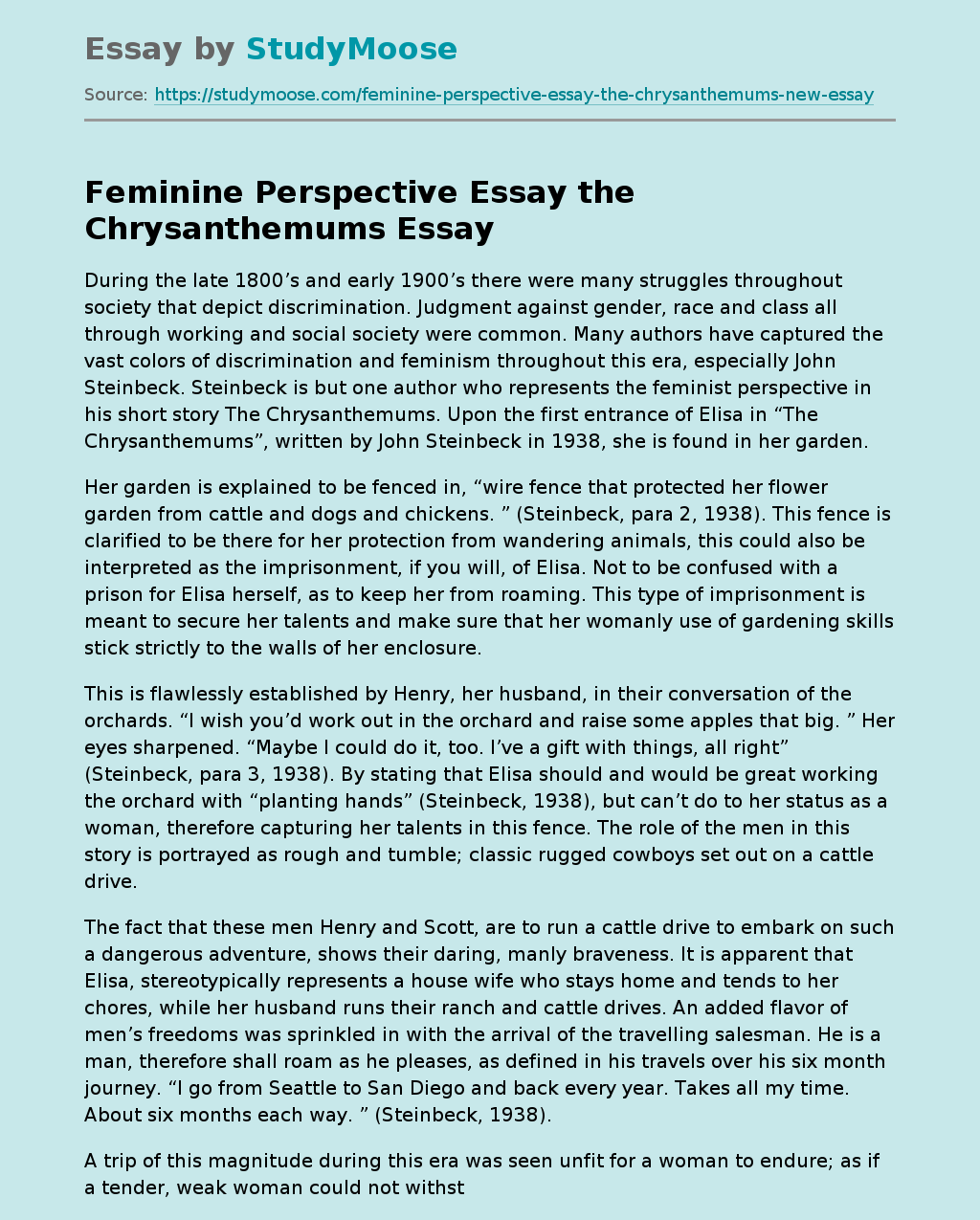