India is a big country characterized by cultural, regional, linguistic and geographical diversities. Such a diverse and vast country cannot be administered and ruled from a single centre. Historically, though India was not a federal state, its various regions enjoyed adequate autonomy from central rule. Keeping in view these factors in mind, the Constitution makers of India opted for the federal form of government. Though, the Government of India Act 1935 envisaged a federal set-up for India; federal provisions of the Act were not enforced.

Thus, India became a federal polity with the Constitution of India.

Federalism is a system of governance in which the powers to legislate is in two levels as Central and subordinate levels.

Federalism in India has a strong bias towards the Union Government. Some unique features of federalism in India are: * There is no equality of state representation. Representation in the Parliament can vary widely from one state to another depending on a number of factors including demography and total land area.

* No double citizenship, i.e. no separate citizenship for country and state. * The consent of a state is not required by the Parliament to alter its boundaries. * No state, except Jammu and Kashmir, can draw its own Constitution. * No state has the right to secede.

* No division of public services.

The main features of Federalism * Provision for more than one form or government to act simultaneously on the same territory and on the same time. * Each government must have their own authority and spheres of power, though they may overlap.

* Neither level of government, state or national can abolished the other.

Why Federalism is Important? Federalism is important because of the following reasons: * Because of diversity, there is a division in the power of federalism (to legislate in better manner). * For better Administration. * Economic development in cultural diversity, linguistic groups, traditions, customs, natural resources. The concept is taken from U.S.A. in 1776 and at the time of U.S. government independence.

How Democracy is linked with Federalism? In a democracy, the involvement of people at state level is more, as the people are free to choose their own representatives, for the people, of the people, by the people.

What makes India a Federal Country?

India is a vast country with numerous languages, religions and regions. The concept of federalism plays a vital role and the power sharing arrangements plays a crucial role in maintaining unity and harmony in the country. India got its independence in 1947 but it also resulted in painful partition that paved way to the formation of Pakistan. After independence, several princely states became a part of the country and the constitution declared India as a Union States. Despite the fact that the word federalism is not used or implied with Indian Union but it is largely based on the principles of federalism.

All the above key features of federalism are well suited to the provisions of the Indian Constitution. The constitution of India provided two tiers of levels of governments “Central or Union Governments representing the Union of India and the state governments. Later, a third tier or level of federalism was formed and added in the forms of Panchayats and Municipalities. These three different tiers of governments enjoy separate jurisdictions and the constitution provides a three- fold distribution of legislative powers between the Union governments and the state governments. It comprises of three major lists and they are as follows: –

1. Union List: – This list includes subjects of national importance such as defence, foreign affairs, banking, communications and currency. They form as the part of Union list as we need a uniform policy on these important matters throughout the country. Union or Central government can only make laws relating to these above mentioned important subjects.

3. Concurrent List: – It can also be termed as co-existing list and includes subjects of common interest to both the Union Government as well as the State Governments. It includes subjects like education, forest, trade unions, marriage, adoption and succession. Both levels of government (Union and State governments) can make laws on these subjects. If their laws conflict with each other then the law made by the Union Government will reign and succeed.

How is Federalism practiced?

1. Linguistic states: – The formation of linguistic states was the first major test for democratic politics in India. There were lots of changes in democratic politics of our country from 1947 to 2006. In India, many old states have vanished while many states have been created. Even the names of areas, boundaries and states were changed during this period. In 1947, the year of independence, the boundaries of many old states were changed in order to create new states. It was done to ensure that the people speaking same language should reside in same state.

It led to formation of some states that were created not on the basis of language but to recognise differences based on culture, ethnicity or geography. It includes states like Nagaland, Uttarakhand and Jharkhand. There was fear of disintegration by some national leaders in our country when there was demand for the formation of states on the basis of language was raised. Earlier central government resisted linguistic states but the experience has shown that their formation has made country more united and integrated. It made administration procedure easier and opened doors of opportunities for everybody.

Our leaders adopted a cautious and vigilant attitude in spreading the use of Hindi in India. According to Indian constitution, the usage of English for official use has to be stopped by 1965 but many non-Hindi speaking states resented it violently and wanted to continue with English. In Tamil Nadu, the movement took ugly turn as it turned into violent agitation. Thereafter, Central government responded positively and agreed to continue with usage of English along with Hindi for official purposes. But still Government of India continues to have encouraged the promotion of Hindi in their official policy. It does not mean that central government can impose Hindi on states where people speaks their own regional languages.

It undermined the spirit of federalism to large extent. After 1990, there was significant changes as the country saw the rise of regional parties in many states of the country. It was the arrival of the era of coalition governments at the centre. It led to new culture of power sharing and created a respect for the autonomy of state governments. This new trend was supported by a major judgment of Supreme Court that made difficult for Central government to dismiss state governments in an illogical manner. Federal power sharing holds more significance in today’s time than in early years when constitution came into force.

Conclusion There are still other subjects that don’t fall in any of these lists. These subjects are computer software that came much after the formation of constitution in India. According to our constitution, Union government has the power to legislate on these left over or untapped subjects. Generally, it is learnt that holding together federations do not give equal power to its constituents so all states in Indian Union does not have identical powers. Jammu and Kashmir has its own constitution and enjoys special status and many provisions of Indian constitution are not applicable in this state.

There are some units of Indian Union that enjoys very little power and these are areas which are too small to be recognized as an Independent state and could not merged with any other states. They are referred to as Union Territories and include areas like Chandigarh, Lakshadweep and Delhi, capital city of India. These territories do not have the powers of the state as Union or Central Government runs these areas with their special powers. It is not easy to make changes to the power sharing arrangements of Union and state governments as it has to be passed with both the houses of parliament with at least two-third majority.

After its approval from both the houses of parliament, it has to be authorized or ratified by the legislatures of at least half of the total seats. In case of disputes about the division of powers, the High court and Supreme Court makes the decisive decision. Both Union and State governments have the power to raise resources by imposing taxes in order to carry on the government and the tasks allocated to them. 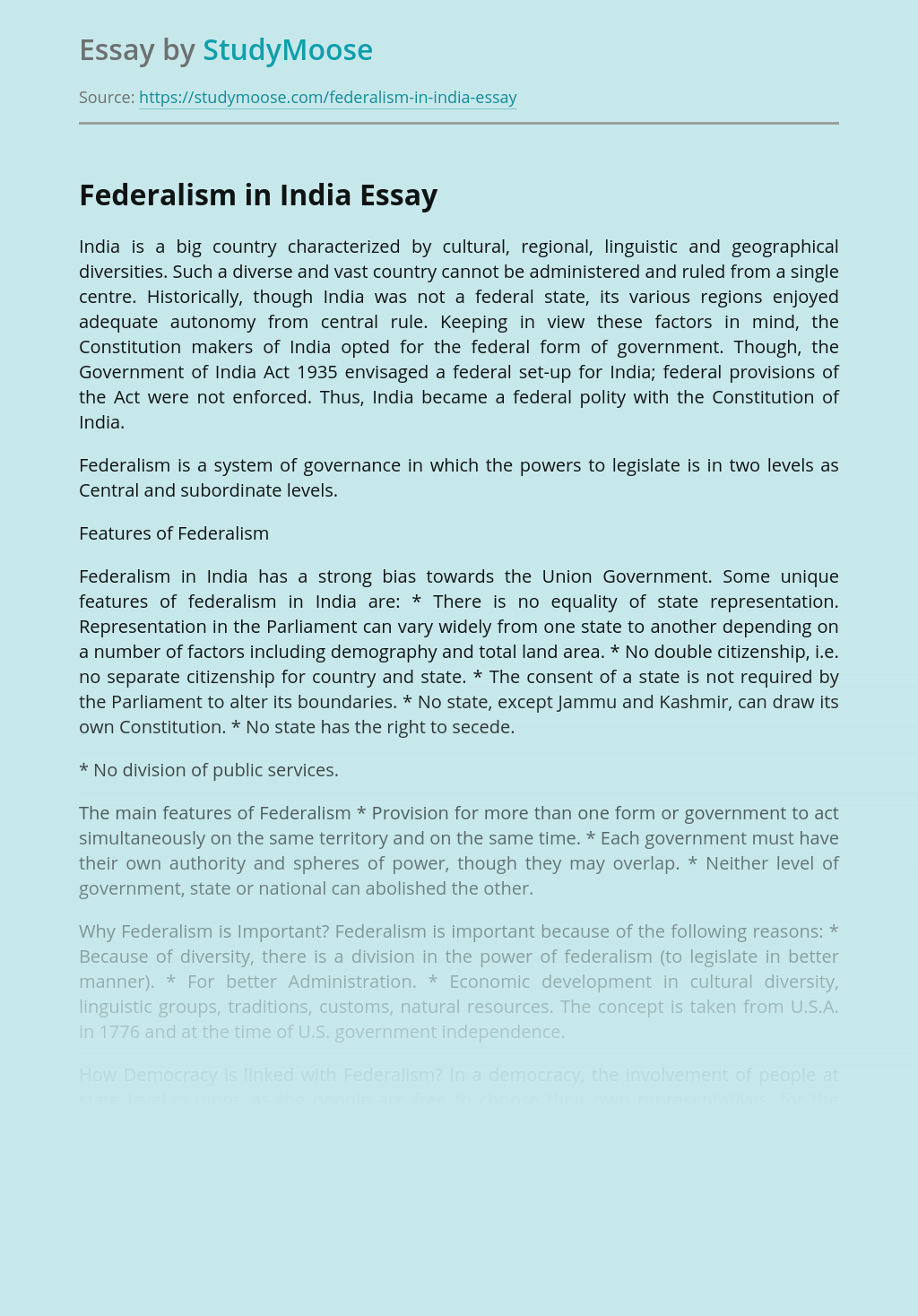