Since the members of our group do like Philippine native foods, we decided to come up with a native restaurant business, the “Probinsyana”. The purpose of this native restaurant is supports the middle class to low class people. Being able to deliver great customer service, great food, and great atmosphere. A hit that will surely be loved by the masses is what this is all about.

Probinsyana cuisines have its influences from different countries. This is due to the fact that traders and colonizers have visited the Philippines for centuries.

Don't use plagiarized sources.
Get Your Custom Essay on Feasib Rationale of Restaurant Just from $13,9/Page

The American and Spanish colonizers, and the Chinese and other Southeast Asian traders influenced and brought a twist on the Filipino cuisine.

Chinese is one of the contributors of the Filipino cuisine. Chinese influences the Filipino on making noodles or what we call pancit. For many years Chinese people interact with the Filipinos and some of them stay and live in the Philippines.

They teach their wife on how to cook some Chinese delicacy but using ingredients found in the Philippines.

When the Spaniards came to Philippines, they introduced the Spanish culture. The Spanish colonies often influenced the Philippines in many different ways. As much as 80 percent of Filipino food originates from Spain. Tomatoes and garlic, for instance, both staple Filipino foods, were introduced from Spain, as was the cooking method of sautéing using olive oil. For example, Adobo, Adobo means marinated sauce for pork. Spain can also lay claim to the delicious range of Filipino desserts and pastries. Baked goodies such as pan de sal and ensaymada are of Spanish origin.

When American defeated the Spaniards and colonies the Philippines, they introduce a little American cuisine. Although Americans didn’t make that much of an influence in Philippine cuisine, they certainly changed the way Filipinos dine. They introduce the fast-food chain that and can goods which is until now available everywhere.

Native Filipino cooking is not too spicy despite the fact that spices are plentiful and readily available in the islands. The basic staple is rice of which hundreds of varieties are cultivated. Main source of protein is fish which abound in oceans, lakes, rivers, streams and ponds. Meat, especially pork and poultry, is also commonly eaten. Beef is readily available but is more expensive; the cattle industry not being well developed in the country. Veal and lamb are not too popular but goat meat is considered a delicacy in some parts of the country as are frogs, rabbits and deer.

It is often when sampling native Filipino dishes that one appreciates the regional variations in the country. For while it is true that Filipino culture is homogeneous, there are specific differences in cooking and food preferences that readily identify the regional origin of many dishes. Although these differences are not as pronounced as in the regional variations of Chinese cooking, for instance, they are widely recognized in the country where regionalism plays an important role because of its geographical division into many island-groups.

The word restaurant was unknown until 1765. At that time a Frenchman called Boulanger opened such an establishment in Paris to serve meals and light refreshments. It was so successful that it was quickly imitated by others, and many new establishments with the same idea and calling themselves restaurants opened in France. The ward restaurant was not generally used in England until the end of the 19th century.

In England, the restaurant idea spread more slowly than in France. At first there came the tea shops, and in 1873 the first restaurant was opened in London. 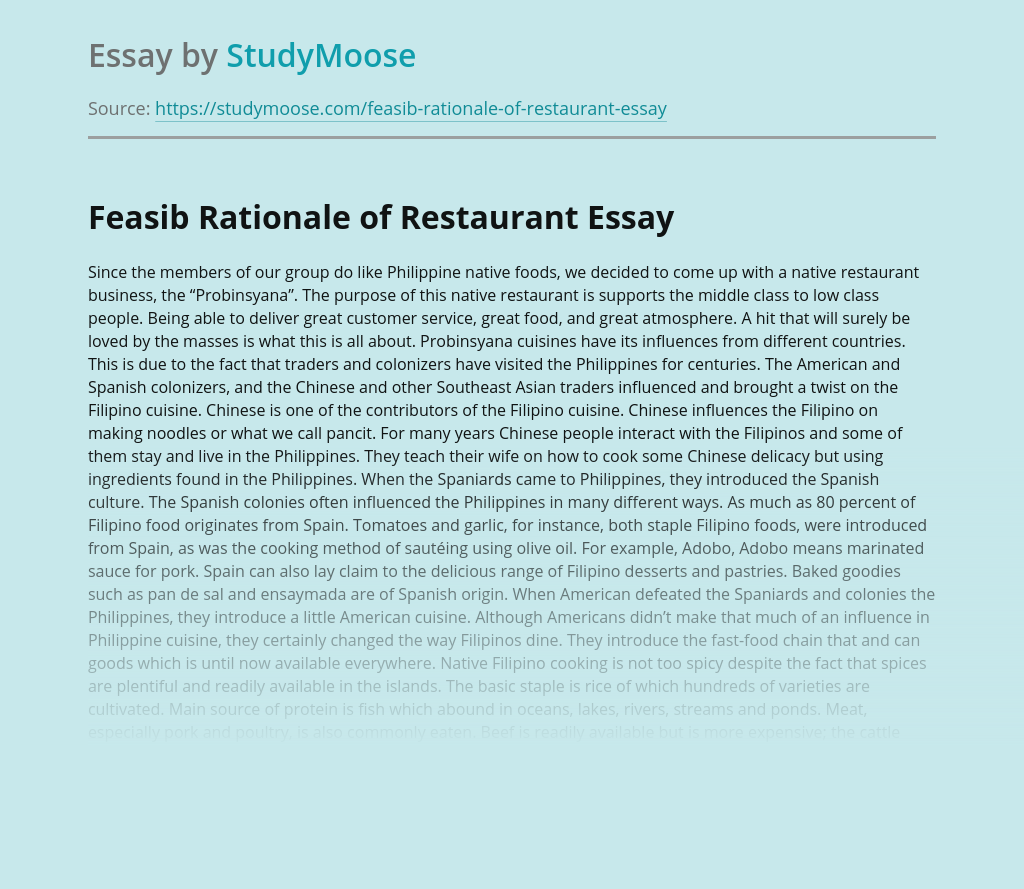 What a blast from the past. September 5, 2013 a date to remember, another great day in my life. This was the day I and my two block mates went and visit an institution. The institution devoted to the procurement, care, study, and display of objects of lasting interest of the country. Significantly, this institution...

The City of Cebu (Cebuano: Dakbayan sa Sugbo, Tagalog: Lungsod ng Cebu, Spanish: Ciudad de Cebú) is the capital city of the province of Cebu and is the “second city” of the Philippines, being the center of Metro Cebu, the second most populous Metropolitan area in the Philippines after Metro Manila. With a population of...

Get Essay
Teleserye: The Emerging Popular Culture of Filipinos

It will be a surprise to hear that there is a Pinoy who is not aware of what teleserye is. Surely, the Filipinos who have lived in the year 1990’s would definitely remember the terrible fate of Judy Anne Santos in the hands of Gladys Reyes in their roles as Mara and Clara. Almost everyone...

Historical Background of the 1987 Constitution

Pablo Baen Santos created the artwork, Krista. It was created in the movement of Social Realism. This artwork is oil on canvas painting which shows a female whose mouth is wrapped with a barbed wire and clenching her fists. At the back of the female subject, the Philippine flag and a lot of people are...