My favourite literary character is Winston Smith. He is the main character in the novel 1984 by George Orwell. I consider him to be my favourite character for a few reasons. These reasons are that he is very strong willed, his fatalistic attitude, his inquisition towards many things, as well as his rebelliousness toward society. I will go into more detail in the following short essay.

He is very strong willed, Winston never let’s any of the antagonists in the story intimidate him, even though they know what he is thinking.

He shows numerous times throughout the story that he is strong willed, despite the fact that the thought police, The Party, and the mysterious Big Brother are constantly trying to psychologically intimidate him, he still keeps his sanity. He also shows this through the torture they force on him toward the end of the novel, he refuses to crack through everything, until the very end when the torture becomes unbearable.

Another reason that I consider Winston to be my favourite character is his fatalistic attitude, he assumes the worst will happen and although at some points in the story he makes bad choices, he also makes some good ones. Due to the fact he believes that Big Brother will eventually capture him he constantly is running, and trying to evade them, although at sometimes he does fell like giving in. He goes to O’Brien and joins the anti-Big Brother rebellion.

Winston is also very inquisitive; he uses his mind in order to rebel against the totalitarian society that tries to rule him.

In almost every chapter he is researching something, or trying to find out something else. He works in the ministry of truth, and he is responsible for altering historical documents, often times he inquires as to what the actual fact is before altering it, as he wants to know. He doesn’t deem much of history to be plausible. For instance the leader of the Brotherhood against the party, Emanuel Goldstein is considered to be the most dangerous man in Oceania. Obviously Winston doesn’t deem this to be correct.

The final reason why I consider Winston Smith to be my favourite character is his rebelliousness toward society. Right near the beginning of the book Winston buys a diary, even though they are strictly prohibited, and not only that but he writes down with big brother in it, which is a huge crime at this time because they can find out what he is thinking and arrest him. He also does many other things that he should have rights to do such as having sexual encounters with a woman named Julia. Not only this but he is secretly indoctrinated to the Brotherhood, which is a secret rebellion against the Party and Big Brother, and constantly meets with O’Brien in order to plan and talk about the rebellion.

It is for the above reasons that Winston Smith is my favourite literary character. 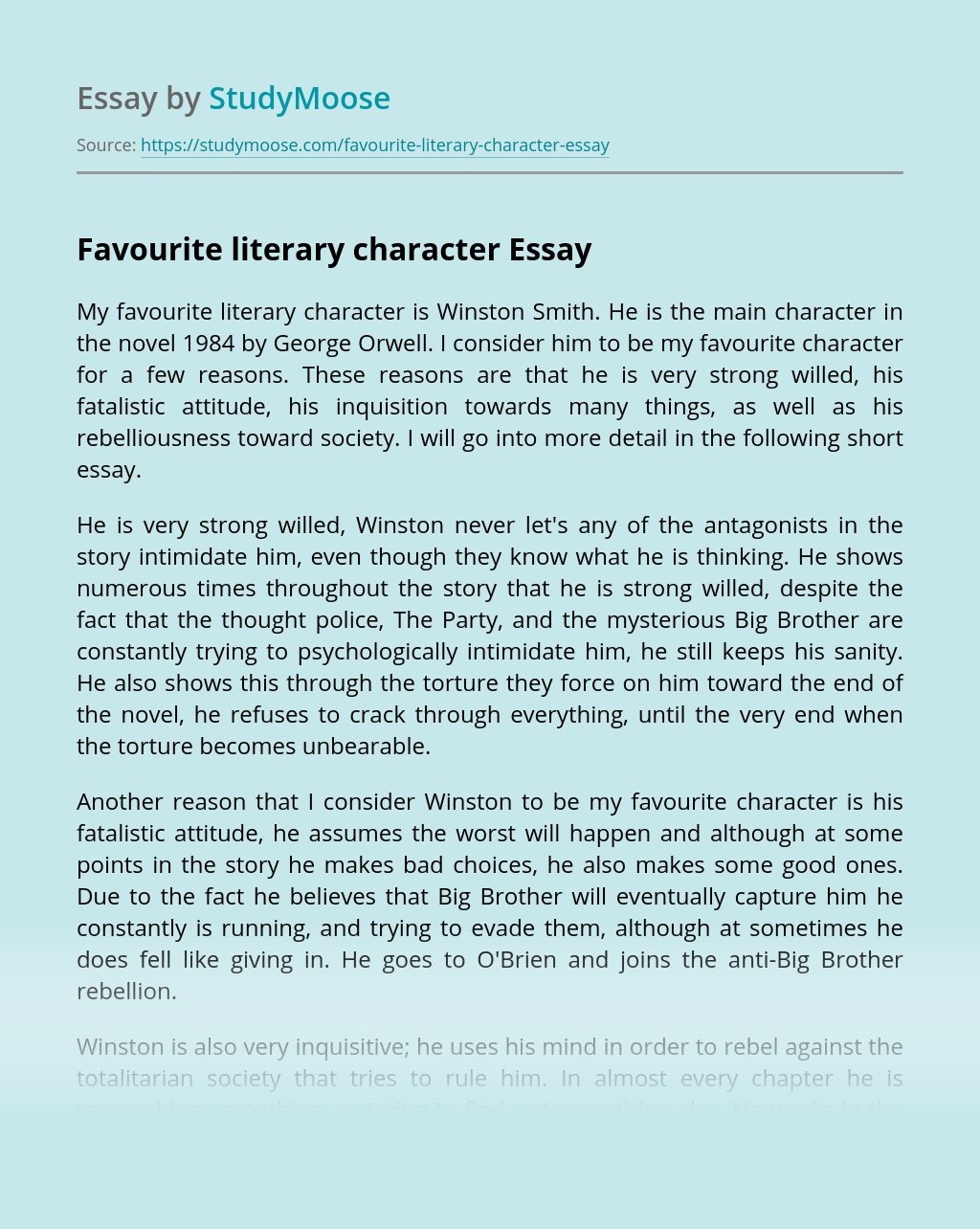