Fate and Destiny Due to Horoscopes and Astrology

Horoscopes are charts created by astrologers. A definition of a horoscope is: the illustration of the position of the sun, moon, and planets from a given location on earth, usually at birth. Which simply means, where everything in the universe was in relation to everything else when you were born.

People have been finding their horoscopes for a long time now, it’s nothing new. The earliest known horoscope was from 409 B.C. where it started to spread in the East with the conquerors of the Roman Empire.

Don't use plagiarized sources. Get your custom essay on
“ Fate and Destiny Due to Horoscopes and Astrology ”
Get custom paper
NEW! smart matching with writer

From there, it started spreading all the way across to Western Europe, where it was almost considered a science itself by all learned people.

Everyone has an astrological sign. There are 12 in all. They are called the “signs of the zodiac”. The 12 signs are called : Aries, Taurus, Gemini, Cancer, Leo, Virgo, Libra, Scorpio, Sagittarius, Capricorn, Aquarius, and Pisces. Each sign represents a set of human characteristics. They deal with certain area of a person’s life, such as marriage, health, work, travel, and death.

Proficient in: Fate And Destiny

Astrologers believe that the position of the objects in the sky when you were born and their movements reflect the person’s character and destiny.

The horoscope also is divided into 12 houses. Unlike the zodiacal signs, which represent the annual cycle of the sun, the house represent the 24 hours of a day of the Earth’s daily rotation. Astrologers make predictions by studying the position of the objects with all of the 12 signs and of the 12 houses. You might see your horoscope in the newspaper today.

It’s based on the signs of the zodiac I mentioned, and where the Sun was located when you were born. It implies that all people born under the same sign anywhere in the world at any time share common characteristics.

Today, even though only a small percentage of people believe in it, books and columns on astrology rate higher than ever – no one can say why! I think curiosity has a big effect on the overall popularity of astrology and horoscopes. Horoscopes are illustrated by circles, called the ecliptic. It’s the way the earth orbits around the sun in a year. Every planet (including the sun and moon) has a sign, depending on where the planet is on the ecliptic when the horoscope was made to be for. The astrology that horoscopes are based on are criticised and questioned often, and although many scientists disagree with the science involved in getting your horoscope, millions of people continue to believe or practice it.

Fate and Destiny Due to Horoscopes and Astrology. (2016, Jun 17). Retrieved from https://studymoose.com/fate-and-destiny-due-to-horoscopes-and-astrology-essay 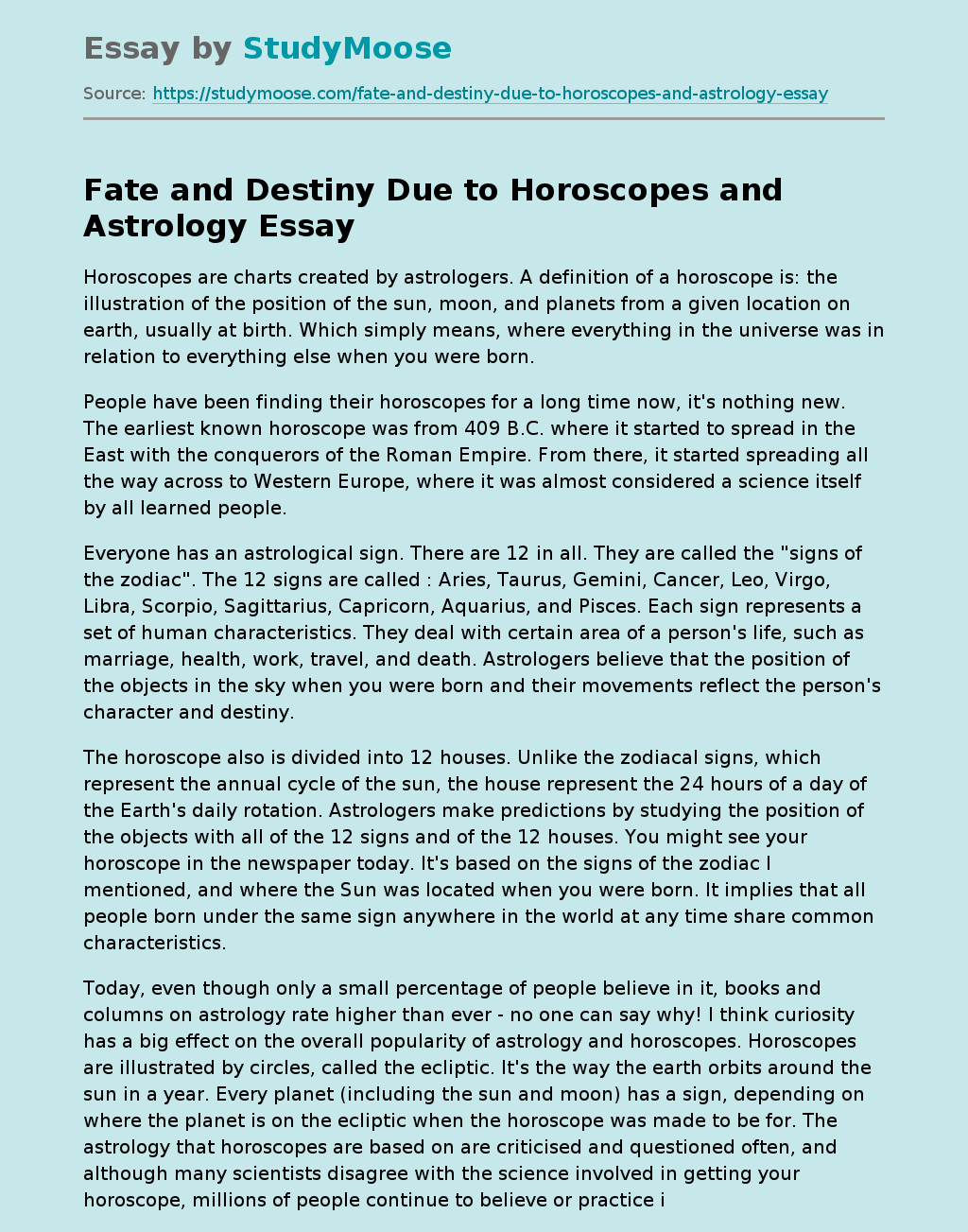