A rise in obesity has been observed in the United States in the last two decades. Obesity is one problem that gives birth to numerous fatal diseases, including but not limited to cardiovascular disease, diabetes, and depression. The Centers for Disease Control and Prevention (CDC) conducted a survey and found that, “More than one-third of U.S. adults (35.7%) and approximately 17% (or 12.5 million) of children and adolescents aged 2-19 years are obese” (Ogden, Carroll). One of the main reasons behind obesity is the American’s love for fast food.

Don't use plagiarized sources. Get your custom essay on
“ Fast Food Advertising And Childhood Obesity ”
Get custom paper
NEW! smart matching with writer

Fast food contains only a small proportion of essential nutrients, and is loaded with unhealthy and non-essential nutrients which do nothing but contribute to obesity and resulting diseases. An equally increasing trend has been observed in the openings of new fast food locations. The fact sheet issued by National Restaurant Association shows that “970,000 new fast food locations were opened in year 2012 and the restaurant-industry share of each food dollar spent stands at 48%” (2012 forecast).

Those parents who know about the adverse effects of fast food consumption try their best to keep their children away from it. But no matter how hard they try to shield their children, some negative forces like advertising provides them a complete exposure to such unhealthy food. A kid may never have eaten a McDonald’s hamburger, but he/she definitely knows what it looks like, thanks to the power of commercials. “A study of almost 100,000 food ads on TV showed that 89% of ads that teenagers see are promoting products high in fat, sugar, and/or sodium” (Taylor, Daniel).

The advertisers are very smart and they never tell the complete story of products they advertise. They make the food look so tempting that it becomes irresistible for everyone especially kids. They best know the techniques to reach out the targeted consumers.

Most of the TV advertisements show super-sized meals at cheaper prices but they never show that the excess consumption results in excess calories input. “A study by Tirtha Dhar and Kathy Baylis indicates that the parents whose children are constantly begging for fast food, after being exposed to TV ads end up purchasing fast food more frequently than parents whose children are not exposed to advertising” (Dhar, Baylis 3). In order to build a prosperous and healthy nation, Government should take action to ban fast food advertising completely to the children. Achievement of this goal requires unity and mutual efforts by whole nation. The issue of fast food advertising to children is not new and an initiative was taken by the Federal Trade Commission after the joint workshop of FTC and Department of Health and Human Services (HHS) on Marketing, Self-Regulation and Childhood Obesity held in 2005. FTC was the first ever organization in the US which recommended that the Congress ban fast food advertising to children under age of 12. According to a report issued by them to Congress, “44 reporting companies spent approximately $1,618,600,000 to promote food and beverages to children and adolescents in the U.S. in 2006. Approximately $870 million was spent on food marketing directed to children under 12 and a little more than $1 billion on marketing to adolescents” (Kovacic, Harbour, Leibowitz and Rosch). Congress has not worked on any of the recommendations presented in the report yet. It seems like they care more about the profits earned by the giant fast food industry than the health and wellness of general public.

Banning fast food advertisements won’t solve the obesity problem at once but it is surely one of the best steps in the right direction – a step that more law makers should not be afraid to take. “The similar advertising bans already exist in some jurisdictions such as in Quebec (Canada) and few Scandinavian countries” (Dhar, Baylis 7). “Sweden, Norway, and Finland have banned commercial sponsorship of children’s programs. Sweden also does not permit any television advertising targeting children under the age of twelve” (Role of Media). “Quebec’s 32 years ban on advertising to children had led to $88 million annual reduction in expenditures on fast food and 13.4 billion to 18.4 billion fewer fast food calories being consumed per year” (Dhar, Baylis 2-10). Residents of Quebec have a very sedentary life, yet their obesity rate is comparatively lesser than the US. These figures indicate that the sanction on fast food advertisement can prove effective in lowering or curbing fast food consumption in the United States as well. A larger proportion of the US population leads a very active life. An active life combined with the proper and healthy diet may lead to significant reduction in the obesity rates. “Media and entertainment giant Walt Disney Co’s has already banned junk food advertisements during its TV, radio and other online programs intended for children under the age of 12” (Heavey).

Lawmakers and other opponents of this campaign may not agree to the effects of advertising on children and may further argue that this ban will never be successful in achieving the desired results. A research paper commissioned by the World Health Organization (WHO) states that, “A survey conducted in the United States showed that 86 percent of children who smoked prefer Marlboro, Camel and Newport which are the three most heavily advertised brands” (Hammond). “A study in the Journal of the American Medical Association found that 91 percent of six year old children surveyed identified the Joe Camel cartoon character as being associated with cigarettes, about the same percentage as recognized Mickey Mouse” (Fischer, Schwartz and Richards 3145-8). Lawmakers should not forget how the ban on Joe Camel proved to be successful in cutting smoking rates in the United States. “High school smoking rates dipped significantly from 34.8 percent in 1995 to 21.9 percent in 2003” (Wilson). Now the webpage of Camel cigarettes cannot be even accessed by kids, as it requires input of some verifiable information. The ban should be placed on the TV channels which children watch the most. A similar ban should be placed on the free video streaming websites which display ads more than the desired videos.

Alternatively, a specific time can be defined by the legislators during which no advertising related to fast food shall be displayed on TV. The report issued by FTC includes a variety of recommendations for media and entertainment companies. The best recommendation among them is that, “More media and entertainment companies should limit the licensing of their characters to healthier foods and beverages that are marketed to children, so that cross-promotions with popular children’s movies and television characters will favor the more, rather than the less, nutritious foods and drinks” (Kovacic, Harbour, Leibowitz and Rosch 11). FTC further recommended media and entertainment companies to use their powers positively. Their report states that “Media and entertainment companies should test the effectiveness of any health and nutrition messages and public education campaigns aimed at the problem of childhood obesity” (Kovacic, Harbour, Leibowitz and Rosch 11). Parents will have to play an active part in this regard. They need to be more watchful about their kid’s media consumption. They should keep an eye on the channels their children watch or the books and magazines they read to see what types of commercials are displayed. By doing this, they can filter out any media source they don’t want their children to use. A child spends a considerable amount of time in a day in school. Schools can play an important role in making the children aware of adverse effects which fast food consumption can have on their health. They should make the fresh fruits and vegetables available to the children.

Fast food companies spend a substantial amount on renting out the spaces used for billboards advertisements. City Government should take some action against these companies and restrict renting out such spaces to them. In order to make sure that these restrictions don’t affect the advertisement of healthy food, the government should set nutrition-based standards which will define what type of products can be advertised. Any product-line that doesn’t meet that standard will never be allowed to be advertised The opponents of this ban may argue that it completely depends on parents whether they let their children buy fast food or not; advertising doesn’t compel them. They ignore the fact that if a parent always says no to his or her children whenever he or she demands for fast food, it would affect them adversely. The kids will compare their position to other kids in the neighborhood or school, and will feel depressed by knowing the fact that they are the only ones who are not allowed to eat fast food. These psychological factors in turn will affect their education and career. “A mother of two children from California named Parham launched a class-action law suit against McDonald’s appealing that the toys given out with the Happy Meals unfairly trap kids into eating unhealthy foods” (Jodi, Sara). She further speaks about the success of advertising in this regard, “Other busy, working moms and dads know, we have to say ‘no’ to our young children so many times, and McDonald’s makes that so much harder to do” (Jodi, Sara). Advertising of junk food is the root cause of these problems, which if banned to children, will let the parents achieve the goal of keeping their children healthy and successful. 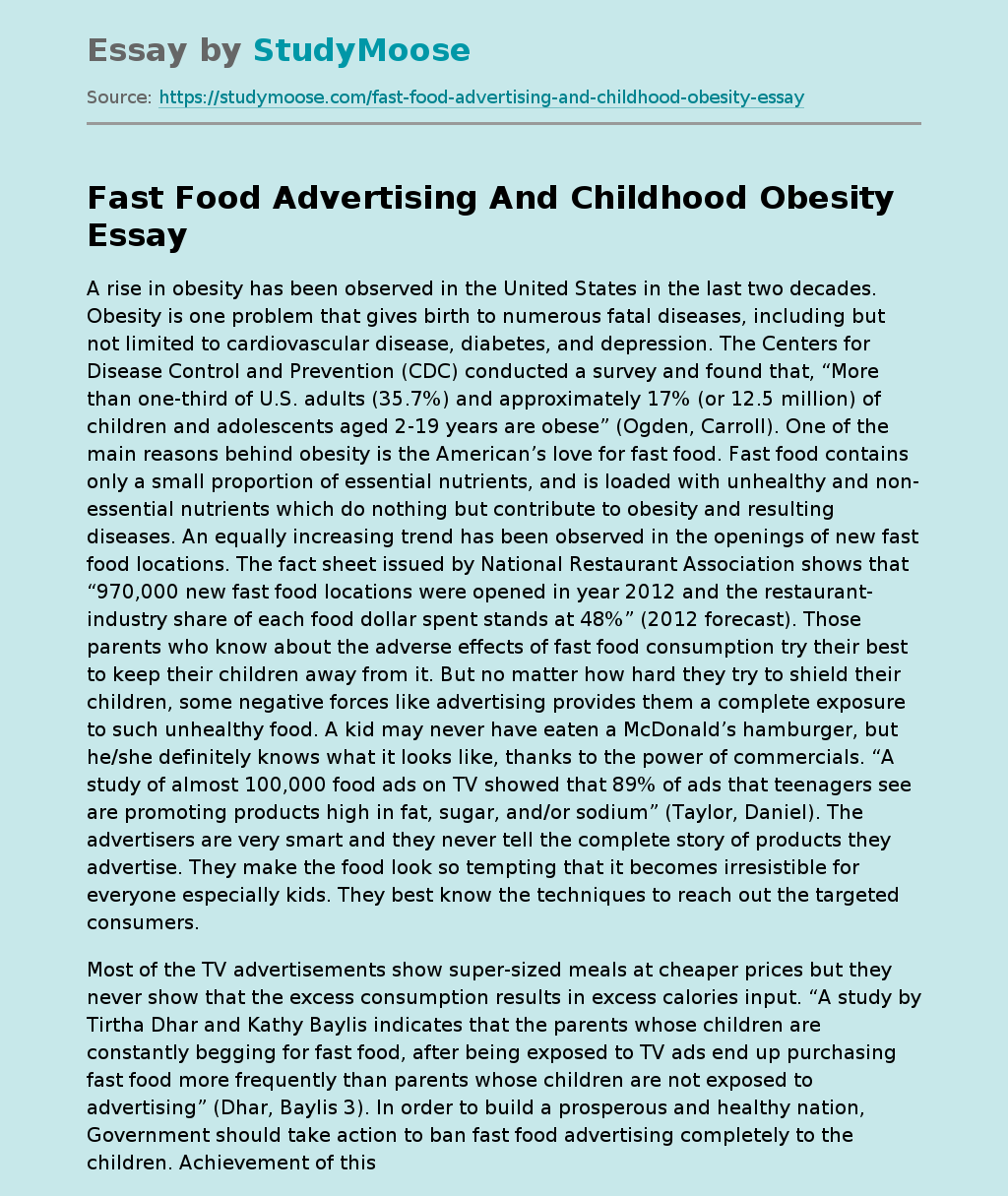