In the late nineteenth century, twenty years after the Homestead Act, farmers used their land in the western plains to produce both crops and profits. The farmers of this time struggled in the agricultural way of life by facing economic and political obstacles that were impossible to avoid, requiring them to do something about their complaints. Although the farmers had plausible arguments for most of their criticisms, their beliefs of the silver standard and overproduction sometimes could not be backed up.

Don't use plagiarized sources. Get your custom essay on
“ Farmers’ Problems in Late Nineteenth Century in USA ”
Get custom paper
NEW! smart matching with writer

However, farmers continued to struggle between inevitable issues like the currency debate, constant debt and rising costs.

The debate over United States currency was a huge obstacle for farmers to overcome because they were in direct relation to the money crisis. In 1890 and 1892 with the Ocala and Omaha Platforms, farmers wanted free and unlimited coinage of silver so they could pay off any debt. A chart showing United States Population and Money in Circulation in 1865-1895 (Document C), shows how after a period of less money in circulation in the 1870s was resolved in the 1880s by the Bland-Allison Act which was later replaced by the Sherman Silver Purchase Act in 1890.

Proficient in: If I Were A Farmer

Both of these acts were passed in Congress to provide free coinage of silver. The reasoning for the silver standard in the Populist platform in 1892 (Document A) was justified by the same reasoning as William Jennings Bryan in his “Cross of Gold” speech. Both describe how the conspiracy that the gold standard is better because England still uses it questions why America became an independent nation.

However, the farmers still remained defeated on the currency debate because of the gold bug president gaining control of office.

One of the biggest struggles for the farmers was not being able to pay off debt. They borrowed extravagant amounts of money from the bank at high interest rates, but this complaint was reasonable because one could not be a farmer without taking these risks. During Grover Cleveland’s second non-consecutive year in office a horrible four-year depression occurred called the Panic of 1893. This panic was caused by over speculation in the stock market and over expansion of railroads; both of these decisions made by the eastern president, Cleveland.

As depicted in A Farmer’s Voice, a Chicago newspaper, (Document D) an eastern leader, Cleveland, takes his western slaves, the farmers, to the courthouse because the farms have been foreclosed. Farm foreclosures, a twenty percent unemployment rate and the cause for Cleveland to return to the gold standard, were effects of the Panic of 1893. Ultimately, this depression added to the unavoidable obstacle of debt. 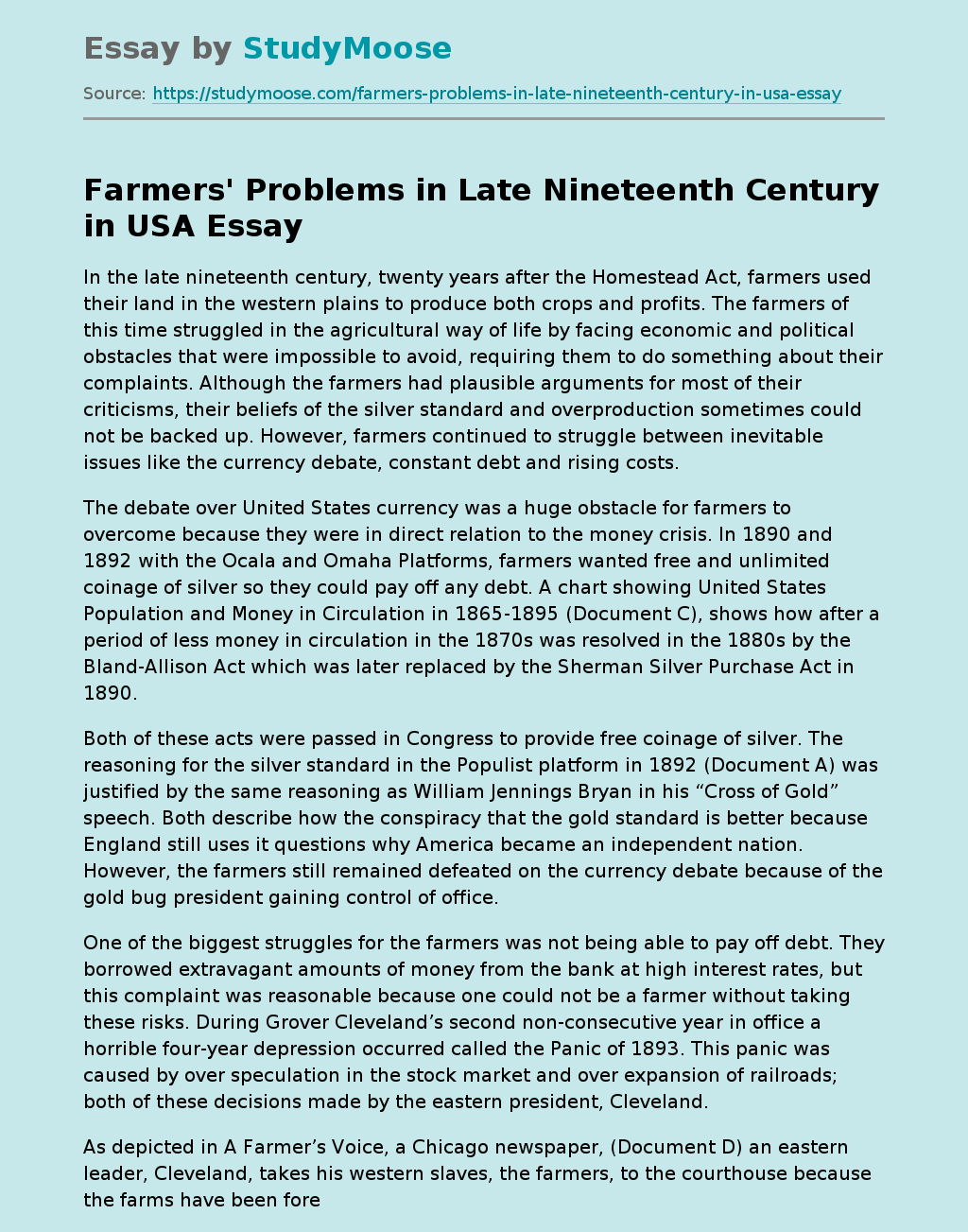