How far and in what way does your reading of the novel support Tom's view of Gatsby?

“A common swindler… I picked him for a bootlegger the first time I saw him”.

Gatsby is initially portrayed as a mysterious, romanticised character of great wealth. He is displayed as being ostentatious however no one appears to know anything about him, only rumours, “I heard he killed a man.” Gatsby assumes everyone knows who he is. He holds company of friviolous, shallow people during his decadent parties; he however shows a certain gravitas unlike the other people at his parties.

Don't use plagiarized sources. Get your custom essay on
“ How far and in what way does your reading of the novel support Tom’s view of Gatsby? ”
Get custom paper
NEW! smart matching with writer

Nick warms to Gatsby immediately, his “smile of understanding” makes Nick feel at ease, Fitzgerald shows that he is not as vaccous as everyone else, in this respect he juxtaposes Tom for whom he eventually competes with for Daisy’s love. Gatsby’s lexicon is unusual; he uses atypical English colloquial terms such as “Old Sport” which makes the reader question whether he is genuine or not. It is Nick as a narrator who is questionably naï¿½ve, who has fallen under Gatsby’s allure where as it is unclear to the reader if Gatsby is an honest and legitimate character.

Gatsby the eponymous character of the novel appears to be different to the other characters in the sense that he appears to bridge the gap between the rich and poor. Most of the wealthy people have failed to earn their vast amount of wealth themselves, instead being born into the high social strata. Gatsby whether legitimately or not has earned the money himself unlike Daisy. Gatsby describes Daisy as having a voice “full of money”, Daisy symbolises what Gatsby has desired and fought for, wealth and status.

However Daisy’s fatal flaw or hamartia is her egotism and arrogance consequently she can never be with Gatsby even though it is this elegance that he has yearned for. In this sense Daisy and Tom are united in their arrogance and pomposity, they are happy to be together not for love or compassion but for ease and because that is societies expectation of them.

Gatsby was inspired to recreate himself, to break free from the shackles of the lower classes and to achieve his version of the American Dream, however in doing this he disregarded his family and his heritage, for which he believed to have escaped. It in this sense that Gatsby is as much a vacuous character as any of the others in the book bar Nick, however he is more regarded as an outsider because of his beginnings even if he has recreated himself he cannot ignore the past, this means he is humiliated by Tom and therefore will never be good enough for Daisy. When Gatsby achieves this he is still incomplete and his avarice and materialism is useless, the decadence that Gatsby symbolises can never bring him happiness. It is through this materialism and greed that Myrtle is killed, she represents the victim or prey of the American Dream.

The statement by Tom is supported to some extent by who Gatsby associates himself with, such as questionable characters like Meyer Wolfsheim who are indicatively mob-like, who was even reported to have fixed the World Series in 1919, the criminal activities told by Gatsby is shown of in admiration or respect, subsequently Gatsby may be a criminal however it is indisputable that he regards himself as a higher form of criminal, an elitist much like that of Tom. It is only for his desire to be able to match Daisy’s expectations of wealth and luxury that he does this however the reader may fail to sympathise with him as it is morally ambiguous for him to do this.

Gatsby is shown as polite and assured for the majority of the novel however Tom himself is displayed by Fitzgerald as being ignorant and restless, such as when describing Tom as having “two shining arrogant eyes” and “always leaning aggressively forward”. Tom embodies socities cruelness and predatory nature which is created by the American Dream. However it is Gatsby who is thought of as an evil or disreputable person by the other characters, this shows the hypocrisy of Tom and the lack of perspective from the other characters and society itself.

Tom questions Gatsby to whether he studied at Oxford, which even the protagonist Nick doubts Gatsby about. When Gatsby’s integrity is questioned he reveals that after the armistice he was offered a place at a university of his choice. Nick states that he “had one of those complete renewals of faith in him that I’d experienced before” this partially suggests that Gatsby is not just a “common swindler”. This assures Nick that in fact Gatsby is at least true to his word however this does not make the accusations of Gatsby’s criminal activities as obsolete.

On the other hand Gatsby admits that he “sold grain alcohol over the counter”, he is blasï¿½ about this and questions “What about it?”, however he is still polite, Tom reveres this as Gatsby showing his sense of self entitlement and pomposity much like the use of “Old Sport” however Tom is in fact shown as being morally bankrupt and a hypocrite, such as his astonishment at Daisy having an affair with Gatsby when he has been having one for a long time.

I believe to some extent that Gatsby is a “common swindler”, he advocates his politeness and sense of importance and class however is association with crime means that other characters stereotype him as someone from the lower social strata. Gatsby is disillusioned to this and thinks he is exempt to such insults where as Daisy’s and some other character’s arrogance and derogatory opinion of Gatsby makes Gatsby a common swindler to the people within ‘The Great Gatsby’ however to the opinion of the reader he is a more honest and likeable character than Tom. In my opinion I believe that Tom’s description of Gatsby as a common swindler is a sectarian view, it is clear that Gatsby is not just a common criminal, in that the crime that is suggested is not just petty theft and he is at least an affable character for which the reader and Nick can to some degree empathise with.

How far and in what way does your reading of the novel support Tom's view of Gatsby?. (2020, Jun 02). Retrieved from https://studymoose.com/far-way-reading-novel-support-toms-view-gatsby-new-essay?post 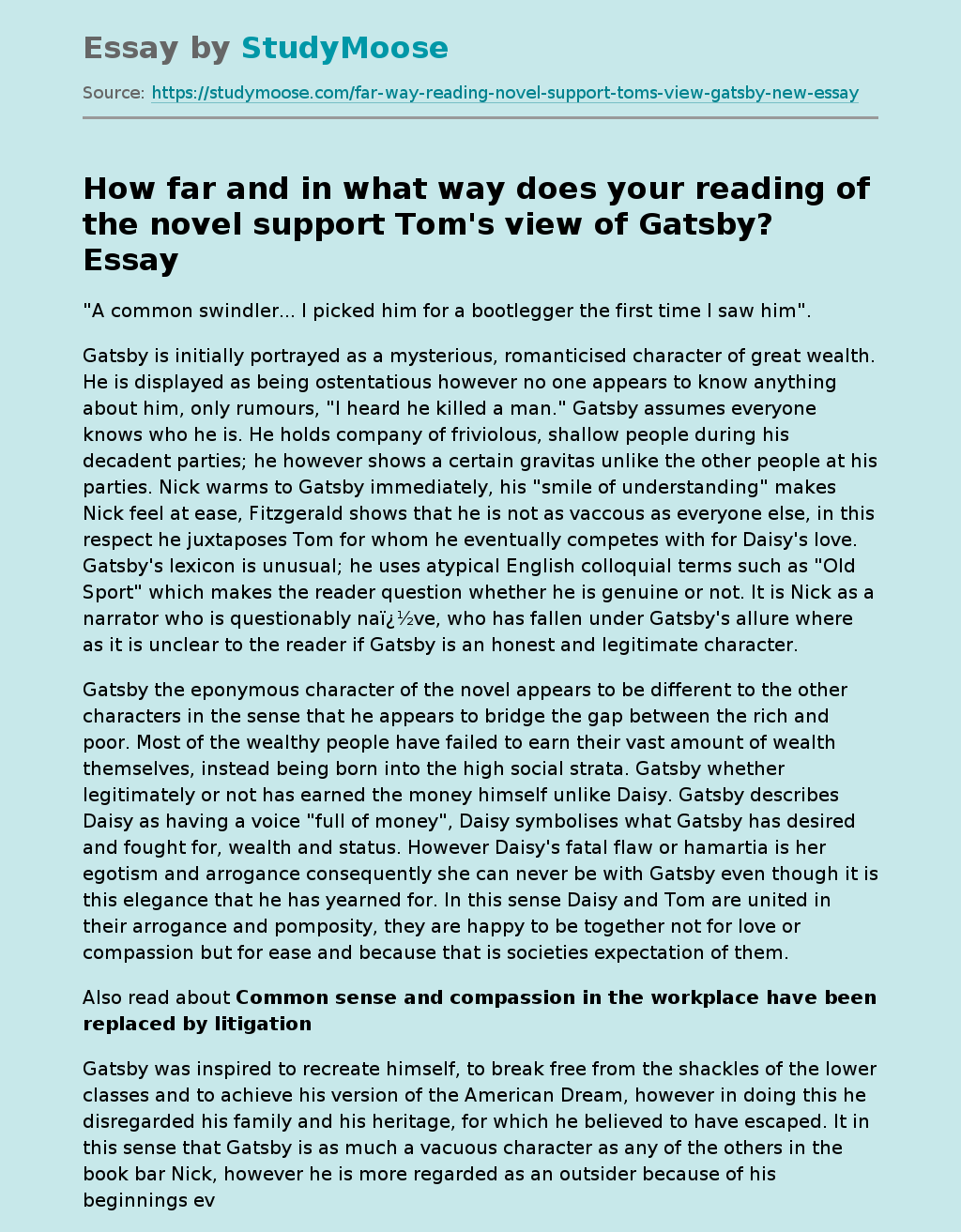