Fantastic Places to Visit in Japan

Japan is one of the world’s most visited countries. It has a wonderful history that dates back to thousands of years. With a rich culture and old traditions, tourists from all over the world visit Japan.

Despite all the wars this country has been through, a good amount of history is still intact and preserved nicely. In addition to this, according to Touropia, Japan has a low crime rate making it an ideal place for tourists to visit. According to Travel Agent Central, the Japan National Tourism Organization reported an all time record of 30 million foreign travelers to visit Japan in 2018 – a significant increase of 8.

Don't use plagiarized sources. Get your custom essay on
“ Fantastic Places to Visit in Japan ”
Get custom paper
NEW! smart matching with writer

7 percent compared to the previous year.

Here you can have a great experience with tons of places to visit, see, and explore. Following is a list of some of the fantastic places you can create wonderful memories during your stay in the land of the rising sun.

Mount Fuji is also known as Fuji-San is the country’s highest peak, and it’s a most recognizable landmark.

The mountain is 3776 meters tall and can easily be seen from Tokyo at a distance of more than a hundred kilometers away.

For hundreds of years, it has been celebrated as art and literature. In 2013, UNESCO recognized its world cultural significance, as mentioned on Planet Ware. Over a million people climb Mt. Fuji just to see the sunrise. According to Planet Ware, during the months of July and August, there are over more than 300,000 visitors that attempt to accomplish the eight-hour ascent to the top.

Located in Kyoto, Ohara, this famous temple is over a thousand years old. It has been preserved well, and you can discover statues, carvings, and paintings. Yusei-en Garden is also a place you don’t want to miss. It has grounds covered with moss that gives it a very green view.

You will find that the area is peaceful and quiet. The Cedar Trees and Japanese Hinoki Cypress Trees create a lovely atmosphere. You can also find Jizo statues here and there. These statues are famous for their unique appearances and are either standing or buried in the ground.

The famous Osaka Castle was built by Toyotomi Hideyoshi to be signified as the center of unified Japan. The castle, however, was later destroyed by Tokugawa troops around 1615. It was reconstructed again in 1931, that is the Osakajo that exists today.

The castle features beautiful gardens, one of these is a famous spot for Hanami, Viewing Cherry-Blossom trees in full bloom. There are many awesome hotels surrounding Osaka where you can choose to stay during your visit.

Jigokudani Park, also known as Snow Monkey Park, is one of the famous hot spots in Japan. The place is famous because here you can find a breed of Japanese Wild Macaques casually bathing in the onsen (hot springs). Its name Jigokudani means ‘Hell Valley’ (Jigoku = Hell, Dani/Tani = Valley). It earned this name because it is smoky due to springs and the cliffs are very steep.

For most time of the year, this park is covered in snow. This place provides an environment in which the snow monkeys can live despite the harsh weather. Since its establishment in 1964, the area has been visited by tourists from around the world.

The Genbaku Dome is the only building left standing in the area where the bomb was dropped. It remains as a tribute to all the lives lost during the attack of the atomic bomb. Hiroshima Peaceful Memorial serves as a reminder of war to people.

It signifies the importance of human lives, the structure has been preserved in the condition after the bombing. The nearby Hiroshima Peace Museum exhibits show how to deal with various issues of world peace.

This museum is located in Tokyo, and it exhibits ancient art from East Asian countries and Japan. With a collection of approximately 7400 pieces and the seven national treasures, this museum should be your must-visit list.

According to Wow-J, they have a nice cafe and a relaxing garden with green grass and a calm atmosphere. You can find English captions below as well. For young children and Junior High School Students, the entrance is free.

It is an ancient Japanese temple that dates back to the year 798! It is a Buddhist temple and is located in eastern Kyoto. According to trip101, the entire verandah of the main hall was constructed without using a single nail.

The awesome construction holds a history of over 1200 years. Natural waters surrounding the temple have kept it in balance. With beautiful scenery and nicely kept state, this temple has tons to offer to each visitor.

In some old traditions, people used to jump in the waterfall to get one of their wishes granted. It is said that more than 80% even survived. It is not a common practice nowadays so you can relax during your travel.

As the name suggests, it is a colossal statue of Buddha located in Kamakura. Being one of the most celebrated Buddhist figures, this statue is 40 feet tall and has a weight of almost 93 tons. It is made entirely from bronze.

Despite being hundreds of years old, the statue attracts visitors from around the world. Formerly the statue was inside a wooden shrine. However, that shrine got washed away by a tsunami in the 15th century, and the statue has been outside ever since.

Fantastic Places to Visit in Japan. (2021, Feb 19). Retrieved from https://studymoose.com/fantastic-places-to-visit-in-japan-essay 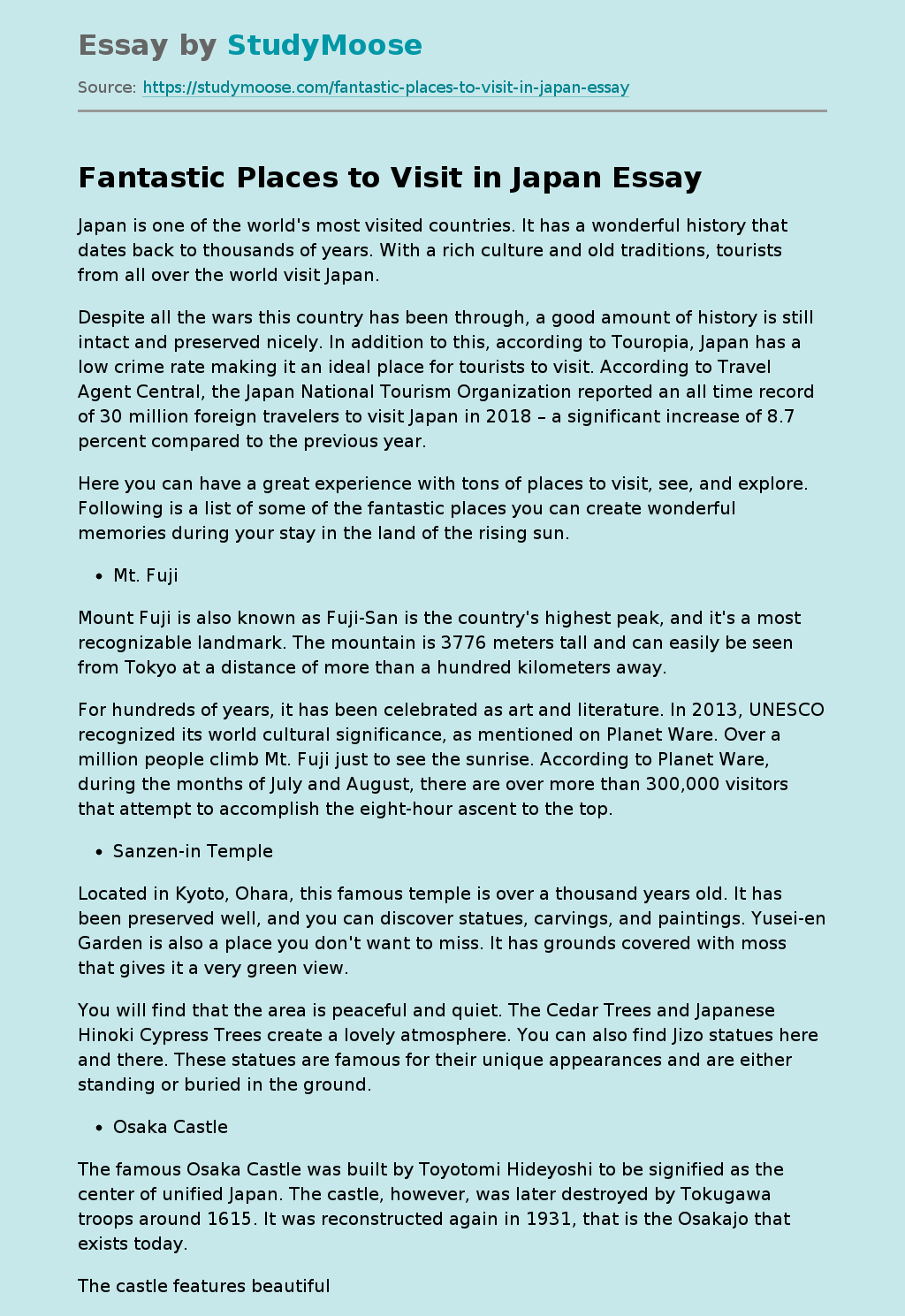