Don't use plagiarized sources. Get your custom essay on
“ Famous Teen Activists ”
Get custom paper
NEW! smart matching with writer

You will see what Faye Carey, Alex Lin, and Malala Yousafzai did to change the world up to this day and furthermore in the future.

20 to 50 metric tons are being thrown away each year. But Because of Alex Lin the environment teen activist has slimed this down by a million and it will keep growing until we hit 0 all because of Alex Lin. Mentioned in “Living On Earth E-Waste Youth activist Alex Lin,” was a very important boy that was born in Westerly Rhode Island ,1992.

In the interview with Alex Lin, it states he got his inspiration from a paper that was made on Wall Street. He has recycled over 300,000 electronics.

But he couldn’t have done this alone he established a team to help him called team Win. Team Win is made up of a bunch of his neighborhood friends this team consisted of Nancy, Bobby, Alex, and Jeff. They have made 7 media centers around the world with the computers they have refurbished (fixed).

Alex tried to pass a law to make it illegal of improper disposal of e-waste and ended up failing the first time. He went back to his hometown got petitions signed and went back and succeeded in 2006 and make improper disposal of e-waste illegal. They made this world a better place by getting rid of e-waste in Rhode Island. In addition Alex Lin had made a movement that has has notified a lot of people of the dangers of e-waste he is such a big topic that so many people talked about he has definitely made a change in this world

Faye Carey, the girl that has given over 364 dogs homes. Faye Carey is a teen activist fighting to get animals a home. According to “Faye carey by Courtney Gardner on Prezi” Faye Carey was born in Waikato, New Zealand 1997. According to “Teenage Girl is Dog’s Best Friend” article, she began giving dogs homes in New Zealand when she was 16. She got her inspiration when she went to a camp and saw a stray cat she wanted all the dogs and cats to have homes after she saw this.

So she decided to start volunteering at the pound in her own time when she didn’t even need to. When she saw the pound she saw that they were getting about 20 new dogs every week. In addition Faye had to keep trying to get homes for the animals. There were so many dogs coming in that she couldn’t find enough homes fast enough. She made a Facebook page and a rehoming for dogs. She has rehomed dozens and dozens of dogs not including the facebook page and the rehome me which has gotten even more homes. She has definitely had a impact on people or how could she have gotten all the dogs home from facebook if she didn’t have a impact on them.

Malala Yousafzai the teen activist who almost died for fighting for women’s education! According to “Malala Yousafzai: The Girls Hero,” she was born July 12, 1997 in Mingora, Pakistan. On October 9, 2012 a young man from the Taliban came onto the school bus that took Malala home he asked where she was and then she was shot with a Colt.45 1 went into the head and the man was off. She wasn’t scared when she woke up in the hospital the Taliban a big terrorist group willing to kill people to get their needs thought this was gonna be a huge setback and she would stop speaking out now and just be scared that they would strike again. But instead of it being a set back it was a set forward Malala would still speak out and still have the same if not more passion then she did before she had a bullet go through her head. She still spoke out after this she even made a foundation called the Malala fund. This fund allows you to give money to help girl education. This fund helps build schools and helps get girl education.

All and all teen activist can be anybody from around the globe. These people are people who make a impact. People that change the world. But they are all inspired by someone or something for example Alex Lin was inspired by just a single article and had to work from that. Alex libby a famous teen activist once said “I don’t believe in luck, I believe in hope”. You don’t have to have luck to do something but you do have to have hope. So have hope if you gonna do something do it for the best. 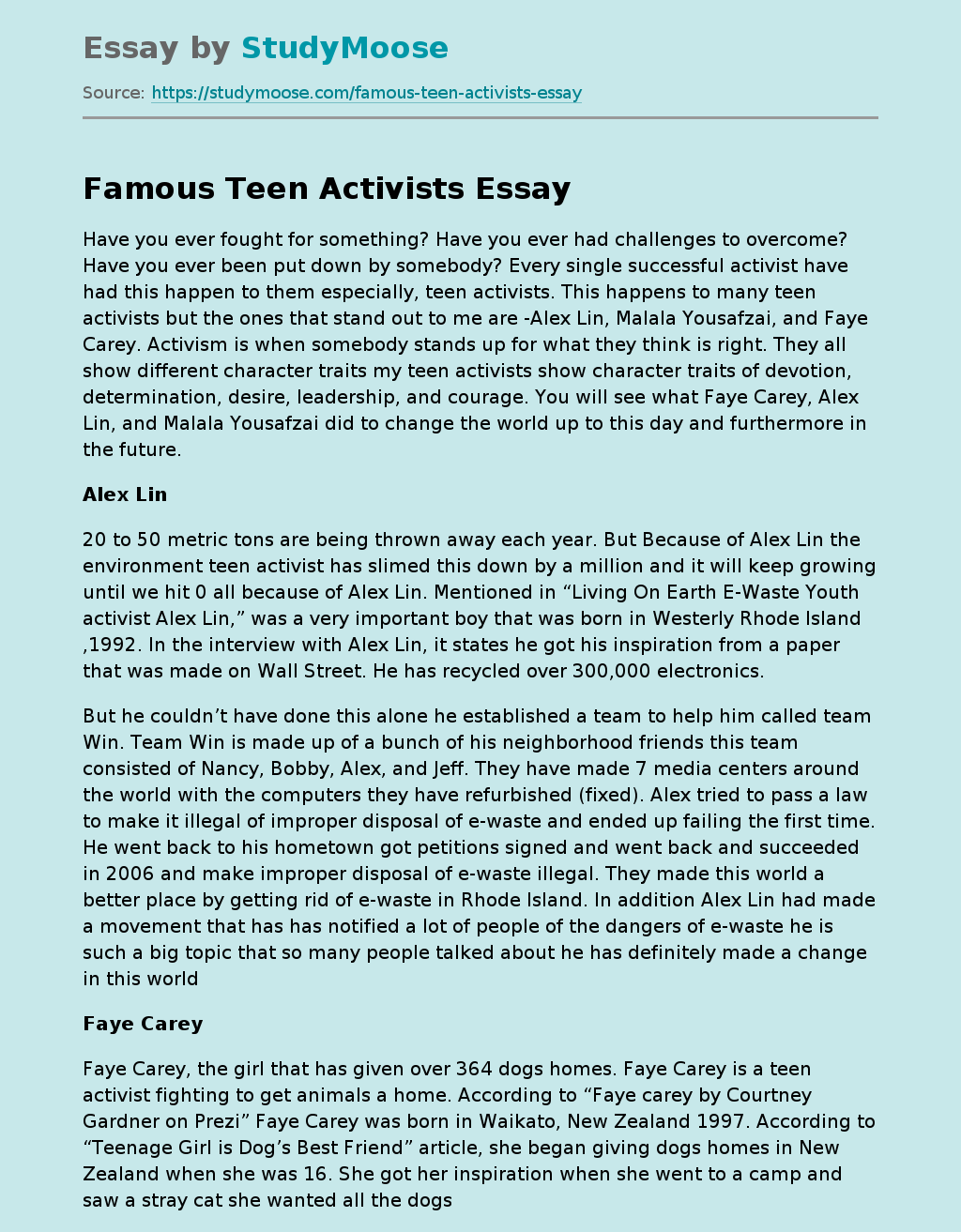