Family Ties and Loyalty in "Antigone" by Sophocles

The ancient play Antigone by author Sophocles explores the depths of family ties and loyalty, delving into how family bonds can influence characters to either obey or disobey the state. The state, in other words, is known as the composite whole of a city, but can be commonly associated with the unyielding power or even corruption of its leader. Specifically, the relationship between Antigone and sister Ismene as well as between Creon and son Haimon demonstrate the clash between familial dedication and personal interests of the state.

Don't use plagiarized sources. Get your custom essay on
“ Family Ties and Loyalty in “Antigone” by Sophocles ”
Get custom paper
NEW! smart matching with writer

Loyalty, however, means different things to the characters: for Antigone, it means unending devotion to her family, whereas to Creon it means being devoted his family in the interest of maintained power. In essence, family acts as a pillar of loyalty in both relationships, but motivates them to either defy the state, or to maintain control of the state. These ideas collectively suggest that the law– be it “divine” or “regal”–ultimately takes precedence over family.

To begin, family acts as a source of loyalty within Antigone and Ismene’s relationship which, in turn, acts as a driving motive for Antigone to defy the state.

Antigone’s enduring bond with her family is so strong that she expects her sister Ismene to mirror the extent of her familial loyalty. After hearing about Creon’s decree to deny burial to their brother Polyneices (and to punish any who breaks his edict), Antigone confronts Ismene with a radical statement and testament of her dedication. After explaining the situation to Ismene, she proclaims, “There it is, and now you can prove what you are: A true sister, or a traitor to your family” (Prologue, 27-28).

Here, Antigone’s loyalty to her family is so extreme that she would consider her sister a “traitor to [her] family” if she does not risk her life for her brother. Looking deeper, Antigone confronts her sister using a demanding tone, as revealed by phrases like “there it is” and “prove what you are”, which comes off as stringent and harsh. Sophocles’ use of a colon (followed by said two options) add a rigidness to the pace of the play, focusing the reader’s attention on Antigone’s stark confrontation. This makes it seems as though Ismene’s only choices are either a near-certain death or becoming a traitor to her own family.

This pattern continues when Ismene fearfully replies, “I must yield to those in authority”, only to have Antigone quickly snap, “I will bury [Polyneices]; and if I must die, I say that this crime is holy: I shall lie down with him in death, and I shall be as dear to him as he to me…you may do as you like, since apparently the laws of the gods mean nothing to you” (Prologue, 51-65). Notably, Antigone appeals to the notion of guilt in order to make her argument more compelling when claiming that “the laws of the gods mean nothing” to Ismene. This demonstrates the clash between the two, as Antigone’s dedication to her family reaches far beyond the constructs of the state while Ismene’s halts when “those in authority” stand in the way. In this way, Ismene’s commitment to the state tests Antigone’s loyalty to her brother, but is ultimately not enough to stop her from defying Creon’s edict in what she considers a “crime [that] is holy”. Clearly, family plays the role of a pillar of loyalty that fuels Antigone to defy the state in the sake of her late brother; in the end, even her sister’s fear of dissent cannot stop it. Next, when considering the relationship between Creon and Haimon, familial loyalty motivates Creon to maintain power over the state.

To Creon, his idea of being a father and a leader have merged into one identity; in the same way, Haimon’s idea of being a son and a subject of the state have also merged together. This is most prominent when Haimon says to Creon, “I am your son, father. You are my guide. You make things clear for me, and I obey you”, and Creon responds, “Good. That is the way to behave: subordinate everything else, my son, to your father’s will” (Scene 3, 9-13). The interaction here seems quite rigid and forced, especially when hearing such spelled out phrases like “I am your son”, “you are my guide”, “I obey you”, and “my son”. One might argue that it almost sounds more like a talk between a leader and subject, rather than a conversation between father and son. Further, this relationship– bordered on the line between formal and familial– translates into Creon’s drive to keep control over the state. After catching Antigone breaking the law, Creon believes that going back on his edict and lessening Antigone’s sentence will not only make him appear to be favoring a family member, but also threaten his respect and authority as a newer king.

The pressure of this decision and the presence of his family (specifically Haimon’s) acts as a constant reminder to Creon of why he cannot lose power to the throne. He inherently fears that he will be “show[n] weak before the people” and his direct family; besides that, he might appear incapable to remain steadfast during conflict (Scene 3, 28). Creon even acknowledges that he “supposes [Antigone]’ll plead family ties. Well, let her. If I permit my own family to rebel, how shall I earn the world’s obedience?” (Scene 3, 31-34). Some might argue that this passage shows that Creon is not loyal to his family, meaning his niece Antigone, because he still sentences her to death despite “family ties”. However, just because Creon might not extend his loyalty to his nieces and nephew, this doesn’t necessarily mean that he does not act out of loyalty for his immediate family. Take Haimon, for example: The very fact that Creon confides in him about “earn[ing] the world’s obedience” by killing his niece emphasizes how he sees his son as a political confidant and worthy of his trust.

That is why family acts as a pillar of loyalty, prompting Creon to keep control over the state; the political presence of his family is such a constant pressure, it has even changed how he interacts with his own son. To analyze further, the relationship between Antigone and Ismene compared to that of Creon and Haimon share some similarities and differences. Antigone confides in Ismene by using a demanding tone, just as Creon confides in Haimon. Also, Antigone’s headstrong and forward attitude mirrors Creon’s; interestingly enough, both have an unyielding nature that derives from their loyalty to their family. Despite these similarities, in the end, Ismene actually supports Antigone’s case and remains loyal to her sister. She says, “I am here to join you, to take my share of the punishment… I want to die with you: I too have a duty that I must discharge to the dead” (Scene 2, 150-154). The mere fact that Ismene considers it her “duty” to join Antigone demonstrates that she now sees familial loyalty as an obligation, not a choice. On the other hand, Haimon turns his back on his father by committing suicide, rather than considering it his responsibility to stand by his father’s side (which, notably, contradicts his former declaration of “I obey you”).

Sophocles includes this moment of defiance when writing, “And now he lies dead with the dead, and [Antigone] is his at last, his bride in the houses of the dead” (Exodus, 83-84). All in all, family may act as source of loyalty, but both relationships differ in how that motivates them. Given these points, it appears that no matter how important family loyalty is, the law ultimately takes precedence. Within the context of the play, Antigone’s defiance is mostly fueled by her dedication to the divine law, rather than solely her loyalty to her brother. She even uses this as her justification to Ismene for breaking the state’s law when she said “apparently the laws of the gods mean nothing to you” (Prologue, 65). This idea continues after Ismene later changes her mind, only to have Antigone turn a cold shoulder: “The dead man and the gods who rule the dead know whose act this was” (Scene 2, 153-154).

In other words, Antigone cares more about being valued in the eyes of the divine law more than her sister showing loyalty to her family. As for Creon, the law of the state takes precedence over Antigone which is apparent when he tells Haimon, “We keep the laws then, and the lawmakers, and no woman shall seduce us” (Scene 3, 49-50). Essentially, he would rather allow his niece to die than to change the “laws” and “lawmakers” of the state, as this would ultimately preserve his position as king. In reality, the politics that comes along with laws have the power to break apart families. Opposing political views within families can easily cause the pillar of loyalty to crumble because for most people, one’s view of the law does take precedence over family ties, especially when considering the modern political world we live in.

Family Ties and Loyalty in "Antigone" by Sophocles. (2020, Sep 07). Retrieved from https://studymoose.com/family-ties-and-loyalty-in-antigone-by-sophocles-essay 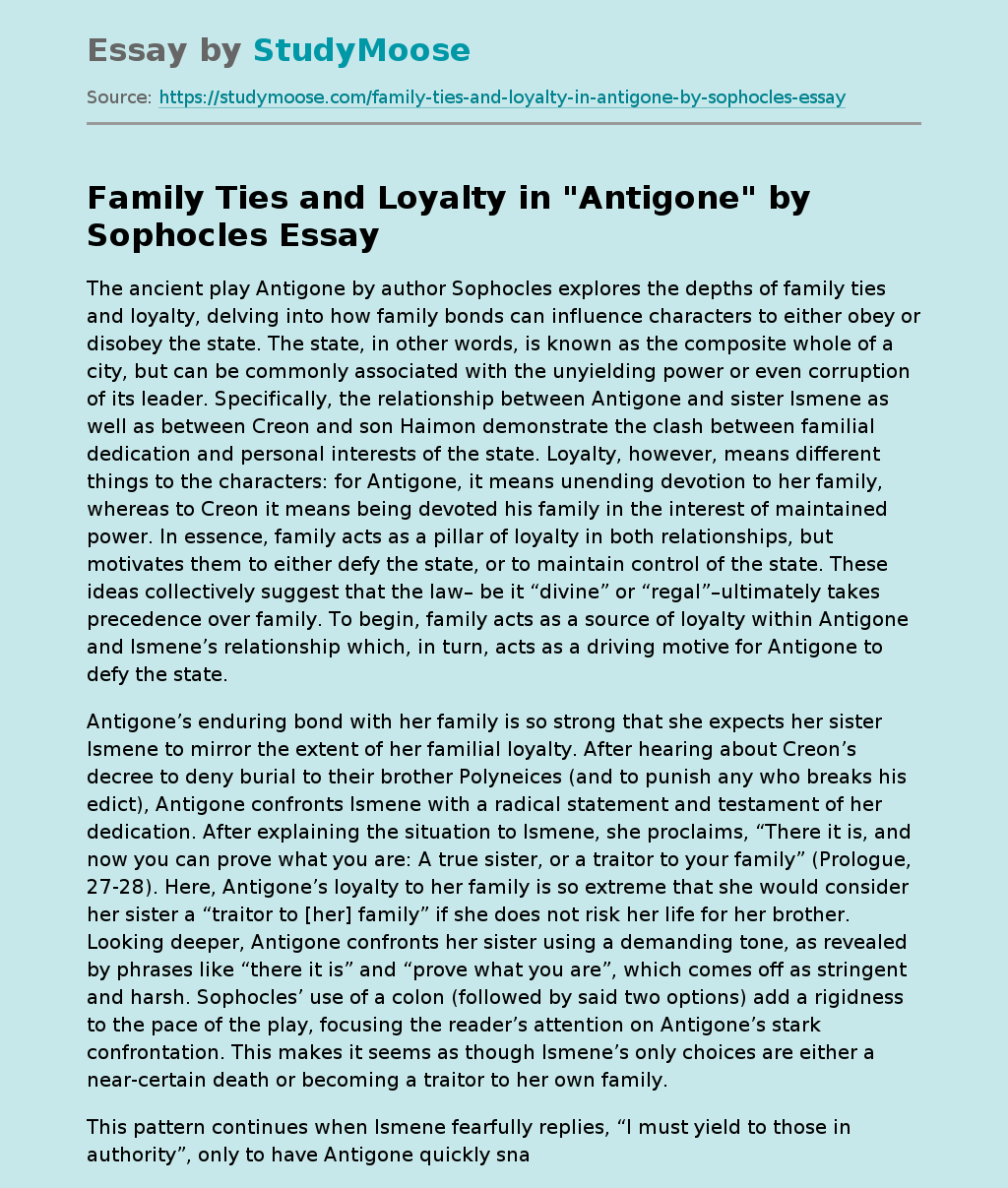