Family life in To Kill A Mockingbird

In order to appreciate To Kill A Mockingbird fully, we should be familiar with some of the background of its setting. The South in the colonial times grew into an area with large cotton plantations and small cities. Because of the necessity for cheap labour to pick and seed the cotton, Negro slavery took a strong hold there. At the outbreak of the American Revolution, there were over 500,000 slaves in this country, with by far the greatest number in the South.

As time passed, plantation owners formed a landed aristocracy. The Negroes, though slaves, gained a measure of economic security. On the perimeter of this were the poorer white farmers who either owned small pieces of land or worked as sharecroppers. To Kill a Mockingbird is set against this background of 1930 Southern life. The Finches are a family who once had a large, successful plantation.

Their ancestors had been aristocratic ladies and gentlemen of the South. Now they have been reduced to gentile poverty.

They are better off by far than the Cunningham’s, for example, who have nothing but their land. Atticus Finch is highly respected throughout the community mainly due to his law career. There are many different kinds of family life in “To Kill A Mockingbird”. There are white families who are higher and lower class and then black families. I think that Harper Lee exaggerates the family hierarchy, i.e. the lower class families are shown as being very poor while the higher-class families are shown to be almost ideal.

This makes it clearer to us how different the families are.

The Finch family would be an example of an ideal family, which is ironic considering that there is no mother. They are a poor family although better off than most and stand near the top of Maycomb’s social hierarchy. There is a lot of love, trust and security within the family. Atticus is a very good father and has brought Scout and Jem up to be very mature and respectful. He devotes himself to his children despite criticism from family and neighbors who think his children lack discipline and proper guidance. Atticus is a wise man, committed to justice and equality, and his parenting style is based on fostering these virtues in his children – he even encourages Jem and Scout to call him ‘Atticus’ so that they can interact on terms as equal as possible. Throughout the novel, Atticus works to develop Scout and Jem’s respective consciences.

He tells Scout to put herself in a person’s shoes before she judges them. Calpernia acts as a mother figure and is treated as one of the family. She is also their ‘bridge’ between the white world and her own black community. Calpernia’s own family may be black, but they are respectful and clean, good Christian people, who are better than some of the white families. Again, Tom Robinson and his family are black but he is honest and respectable. However they are still inferior to the extremely lower class white folk.

The Ewell family is known as ‘white trash’. They would be at the very bottom of the hierarchy. They represent the dark side of the South: ignorance, poverty, filth, and hate-filled racial prejudice. In contrast with the Finch family they show poor parental care. Bob Ewell is a father of eight who is a drunken, permanently unemployed member of Maycomb’s poorest family. The attitude and actions of the father influence the children’s behavior and attitude. i.e., they are renound for attending only the first day of school.

Like the Ewells, the Cunningham family is very poor. They are uneducated country farmers but are honest and hardworking. They take nothing unless they can pay it back in their own way, for example leaving Atticus stove wood, hickory nuts and holly to pay for his services.

The Radley family is a very good example of parental failure. Their son Boo is an intelligent child emotionally damaged by his cruel father. The parent’s mistreatment of Boo has resulted in his life being totally ruined. They are also the centre of Maycomb’s gossip and from this, we get the impression that Boo is a violent and nasty man, when actually he is kind and befriends and protects Jem and Scout.

We don’t hear very much about Dill’s family, but from what we do hear, we can see that he has a very difficult situation where he comes from a broken family. Dill spins grand tales about his father but runs away from home later in the book because he feels his mother and stepfather don’t care about him. Harper Lee makes it very clear to us that parents influence children so much so that we can see the enormous difference between the Finches and The Ewells. We are introduced to a good black family that is destroyed by a drunken bum who is unfortunately white. This complicates us to show the intricacy of the moral values that were unjust at the time.

Family life in To Kill A Mockingbird. (2016, Jul 05). Retrieved from http://studymoose.com/family-life-in-to-kill-a-mockingbird-essay 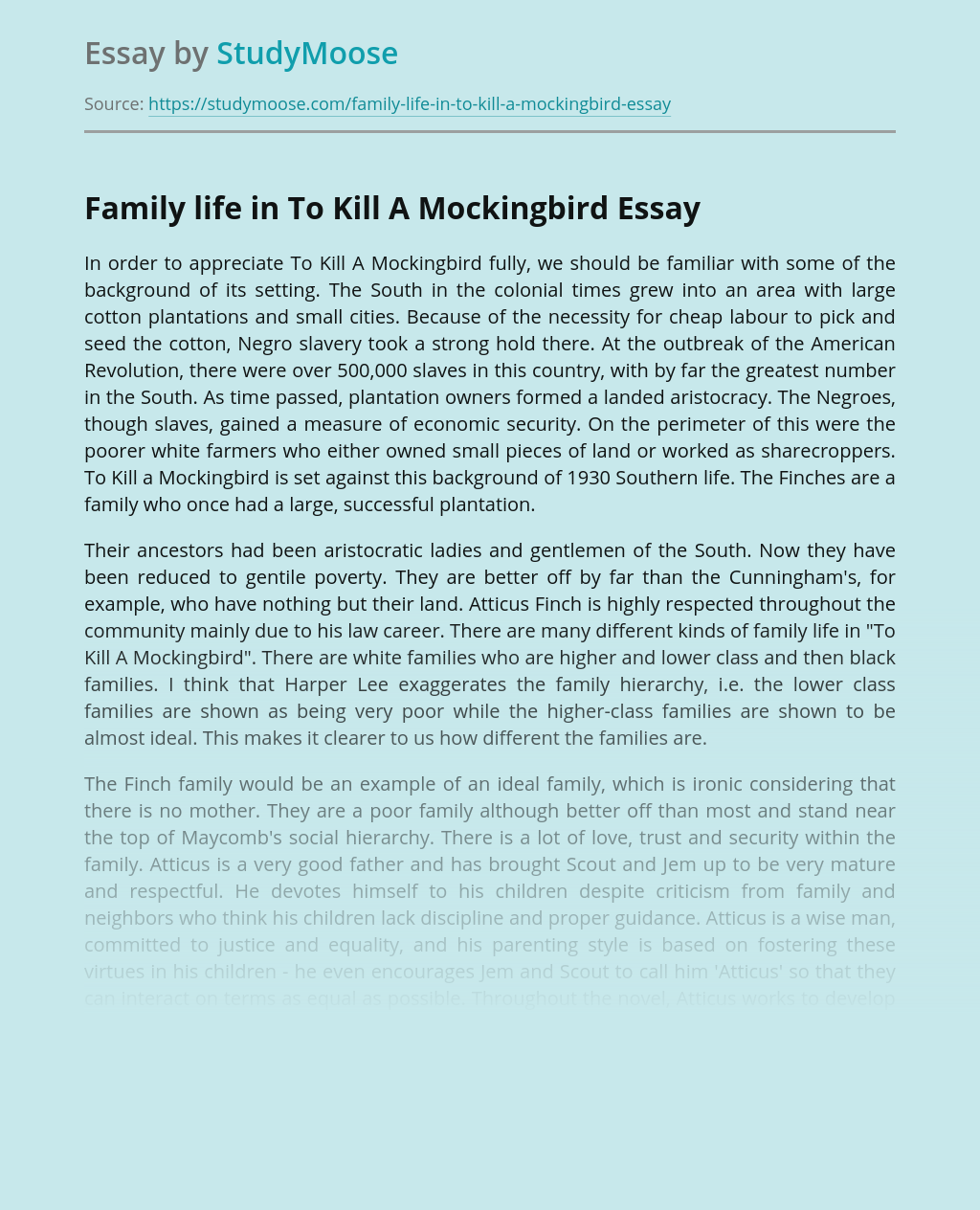 Don’t waste time
Get a verified expert to help you with Family life in To Kill A Mockingbird
Hire verified expert
$35.80 for a 2-page paper
Stay Safe, Stay Original