Family Issues as the Main Cause of Violence

What is the main cause of violence in Master Harold… and the Boys? “Master Harold… And the Boys” written by Refaat Rayhan uses South Africa during the Apartheid era as the main setting that illustrates institutionalized racism and how it unconsciously affects the characters. Hally’s warm relationship with two black African servants reflects humanity’s potential to dispel racial boundaries. Since Hally has spent a great part of his youth with these two Black African waiters, they created a unique sense of human attachment that may seem peculiar to most people that.

Don't use plagiarized sources. Get your custom essay on
“ Family Issues as the Main Cause of Violence ”
Get custom paper
NEW! smart matching with writer

Simultaneously however, the political climate due to apartheid system becomes apparent as the story progresses. The play centrally gives the full impact of Hally, Sam and Willie’s simple conversation of the daily events and problems in their lives and how the conversation reflects the hidden effects of Apartheid system with these characters especially on Hally’s part. It is apparent that the dominant manifestation of violence here is how the characters unconsciously respond and conform to racial differences.

However, it can be concluded in this story that family issues also triggers the theme of violence in their midst of conservation. Hally who has lacked an optimistic fatherly presence in his life has unconsciously looked to Sam to fill some of that fatherly role. The unsatisfactory image of Hally’s father who is drunken cripple of a man and self centered pervades throughout the play. Hally’s self esteem and self worth has been damaged over the years because of his father’s shortcomings and imperfections.

His father trials and tribulations have been shouldered by Hally as his own.

Hally’s hostility and ambiguity of character in the play particularly in the conversation is being manifested every time he is being confronted by his mother on the phone call. The conversation of Hally, Sam and Willie started humorously. They initially chatted about ball room competition and later, Hally and Sam teases each other about Wilies’s dancing and his dancing partner. Hally in the beginning of the play displays his fondness and friendly interest in the lives of the boys with his optimistic affirmation and approval of their ballroom dancing.

Hally’s ambiguity of character is of course initially discernable on how he unconsciously and subtly respond to the social construction reality of white’s and black’s differences during the whole course of conversation. But let’s focus on family issues as a triggering point that revealed the real nature of Hally and his tendencies to subtly demonstrate racism. The abrupt and short lived call of his mother once in a while disturbs Hally’s moments of optimism and reminisces with his fond memories with two blacks. The violence here is manifested with the mood alteration of Hally every time his mother calls.

In the first call, the news that his mother is bringing his father home from the hospital that day makes Hally uneasy. Since he believes that his father has not fully recovered yet makes him disappointed with the news. As a result he becomes agitated with both Sam and Willie, reminding them that they should go back to work. On the second call when her mother confirmed that she is bringing her father home from the hospital, Hally argues with her but loses the argument. He eventually turns his anger loose on Sam and Willie.

On the third call of his mother, Hally is forced to speak to his father and pretended to be happy about the homecoming. Sam, aware of what’s happening opposes Hally from disrespecting his father. Hally whose pride is hurt, blows out against Sam as he never has before. Hally out of anger reminded Sam of his status as a servant not a friend or a father or any special relationship. Note that Hally, Sam and Willie speak familiarly and affectionately to each other especially as they reminisce the old days when Hally’s family is out of picture, but the course of the conversation altered as Hally is faced with the pressures of his family issues.

Hally’s hidden and unknown familiarity in racial differences taught by his parents is revealed. What is the main cause of violence in American X? The visual approach of the movie especially in the series of flashbacks to the years leading up to Derek’s crime and punishment obviously illustrates violence. One might say that the main theme or reasons of violence here is the disastrous implications of racism and hate since Danny and Derek, who are the main protagonists, are both white supremacist that advocate the conviction that white people are superior than any other race.

However, the explanations of Danny and Derek’s radical changes in behavior should not be perceived as relentlessly one dimensional alone but rather should look closer to the Derek and Danny’s family background since the subtle voice- overs in the film also guide the viewers about the events of their family’s life. Derek, on the peaked of his teenage years was initially influenced by his firefighter father who was an assumed racism. When Derek’s father is murdered in a drive by shooting, shortly afterward Derek was transformed from a white ordinary teenager to a vengeance seeking white supremacist.

The death of Derek’s father unconsciously influence his future endeavors in different forms of violence. Derek eventually involved himself from minority gangs in their area that commits acts of violence and intimidation. Derek with his skills and abilities became a leader that all these wannabes skinheads look up to including his younger brother Danny. Danny idolizes his bother that inspire his future involvement in crime and punishments. But when Derek was been in prison once and emerge with a desire to change attitudes and fates, Danny got disappointed that reflects change of heart as something brutal. The brutalities manifested in the movie started from Derek’s father up to how Derek greatly influences his brother.

Family Issues as the Main Cause of Violence. (2016, Nov 30). Retrieved from https://studymoose.com/family-issues-as-the-main-cause-of-violence-essay 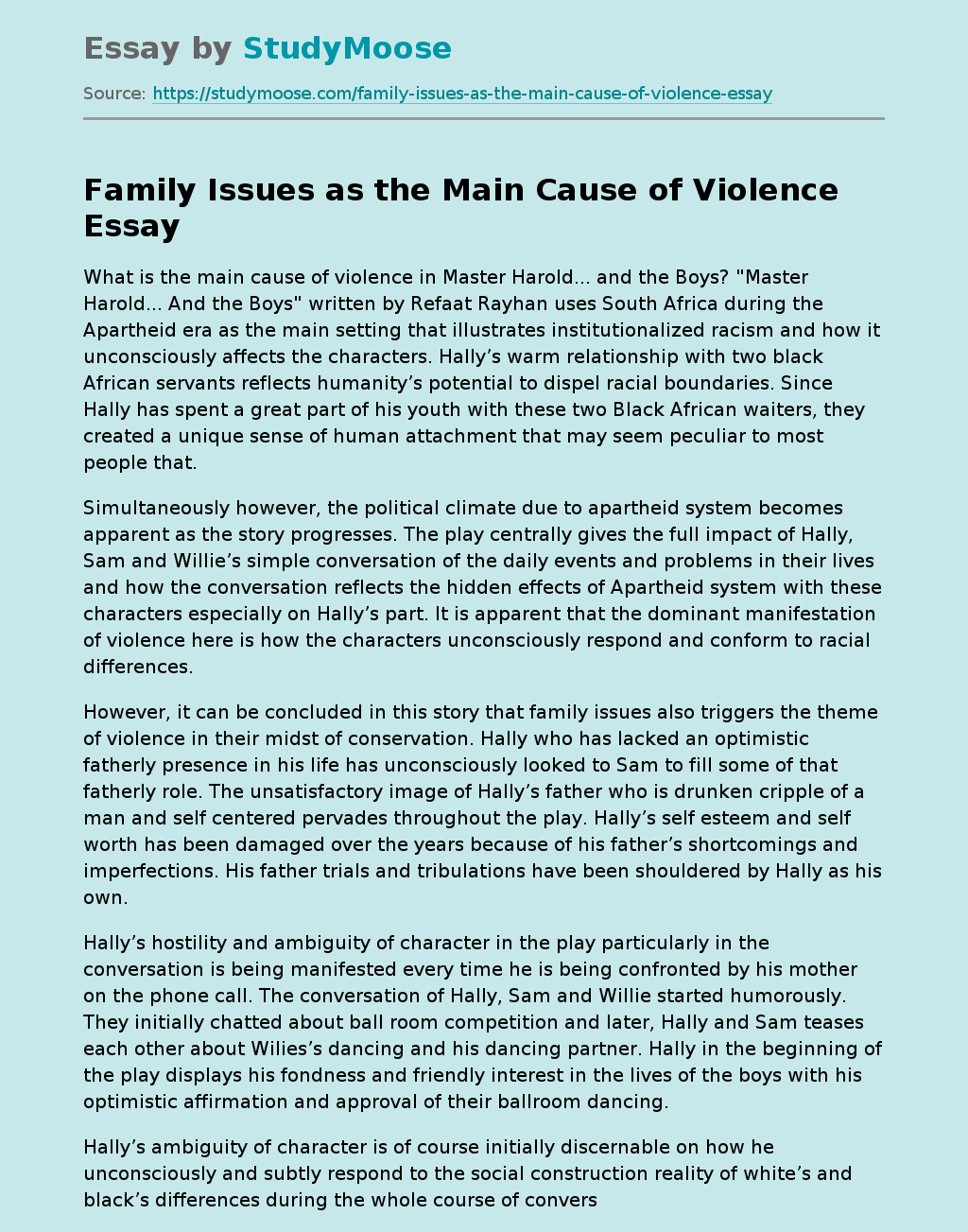