Fairbanks the largest city in the inner region of Alaska is home to the University of Alaska system. Known for its unpopular climate, it is classified as subarctic. With short summers & long cold winters, the snow is heaviest in October through January, but still prevalent from February to May. Studies have demonstrated that this adverse climate contributes to one of the regions’ causes for unemployment natural unemployment. 66% percent of Fairbank’s population is white. African-Americans, mostly concentrated on military bases, make up 9% of the population.

Don't use plagiarized sources. Get your custom essay on
“ Fairbanks the largest city in the inner region of Alaska is home ”
Get custom paper
NEW! smart matching with writer

Over 3% of Fairbank’s population are Asian, and 9% are of Hispanic or Latino origin. The second largest population, 10%, is comprised of Native Americans.

Young Native Alaskans face particularly devastating hardships related to the economic challenges that pervade their community. Native youths are exposed to higher rates of violence than any racial group in the country, which may be fostered by tribal norms that encourage underage drinking and conflict with values of the Western majority culture.

Nationally, they have the lowest high school graduation rates in the country as well as higher levels of substance abuse and suicide. Efforts to address these problems are underway at both the national and tribal levels.

In 2012, former President Obama proposed legislation to increase funding for Indian programs, including those aimed at improving school quality and enhancing post-secondary career and technical vocational training. In addition, he initiated Bureau of Indian Education reforms to increase tribal control of schools on Native lands. Meanwhile, some tribes are developing educational standards rooted in their local language and culture, while others are using peer groups to help Native youths talk openly about suicide, violence, substance abuse and other problems.

During the years 2016 and 2017, the state of Alaska lost over 6,000 jobs. The oil and gas sectors one of the largest sectors of commerce in the region “continued to show the largest over-the-year losses, followed closely by construction, professional and business services, and state government.” (King) In contrast to the loss of jobs in most sector, the health care and leisure industries demonstrated considerable gains. Though it may seem that Alaska has a higher rate of natural unemployment, much has yet to be discovered to explain the discrepancies that exist and contribute to the states’ association between crime and unemployment.

The demand for jobs in the summer is higher, and include industries such as tourism, commercial fishing, and firefighting. Seasonal jobs cause a significant amount of fluctuation in their monthly employment data demonstrating a serious need for the implementation of new strategies to collect relevant and reliable data. The United states has employment rates that move roughly 1.4 percentage points between its seasonal highs and lows in Alaska, this is far from the case. That range rounds out to nearly 3 percent, almost double the national rate of motion for unemployment. Few large centers of wage employment contribute to the lack of opportunity in the region. As a result, the central role of community life has become framed around the lack of employment in the regions. Cultural mores and ways of thinking also shape the economic values that support the tribal communities and play a pivotal role in their economic socialization.

Upon examining the National Urban League’s 300 communities and 88 affiliations, Intergenerational Management has found that state and private sector involvement in the challenges, and improvement of the area are needed in the Alaskan Labor Market. These tenets are premises upon which the policy proposals are founded upon:

· Collaboration is the key to national and regional economic development initiatives

· Expansion of federal initiatives that link entrepreneurs and the workforce to IT skills, incentives, innovation, and promotion of relevant resources for small businesses yield desirable outcomes.

The Urban League Entrepreneurship Centers located in the 13 affiliate markets have been successful in equipping minority entrepreneurs with the management skills needed to grow their business, obtain financing and contracts, and create and preserve jobs. These centers provided a combined 35,400 hours of business counseling and training services to 12,168 clients and assisted them in procuring over $200M in financing, equity, grants, boding, and contracts. Public-private partnerships like these are necessary for the development of policy initiatives that will drive innovation and work to rid the area of undesirable outcomes.

Most notably, Project Empower University, formerly known as Project EmpowerrU, serves as the foundation of National Urban League efforts to engage the affiliates in a full suite of technical assistance/capacity-building efforts. Our multiple models have seen growth and development in the target regions, yielding positive outcomes for the communities affected.

Fairbanks the largest city in the inner region of Alaska is home. (2019, Nov 20). Retrieved from https://studymoose.com/fairbanks-the-largest-city-in-the-inner-region-of-alaska-is-home-example-essay 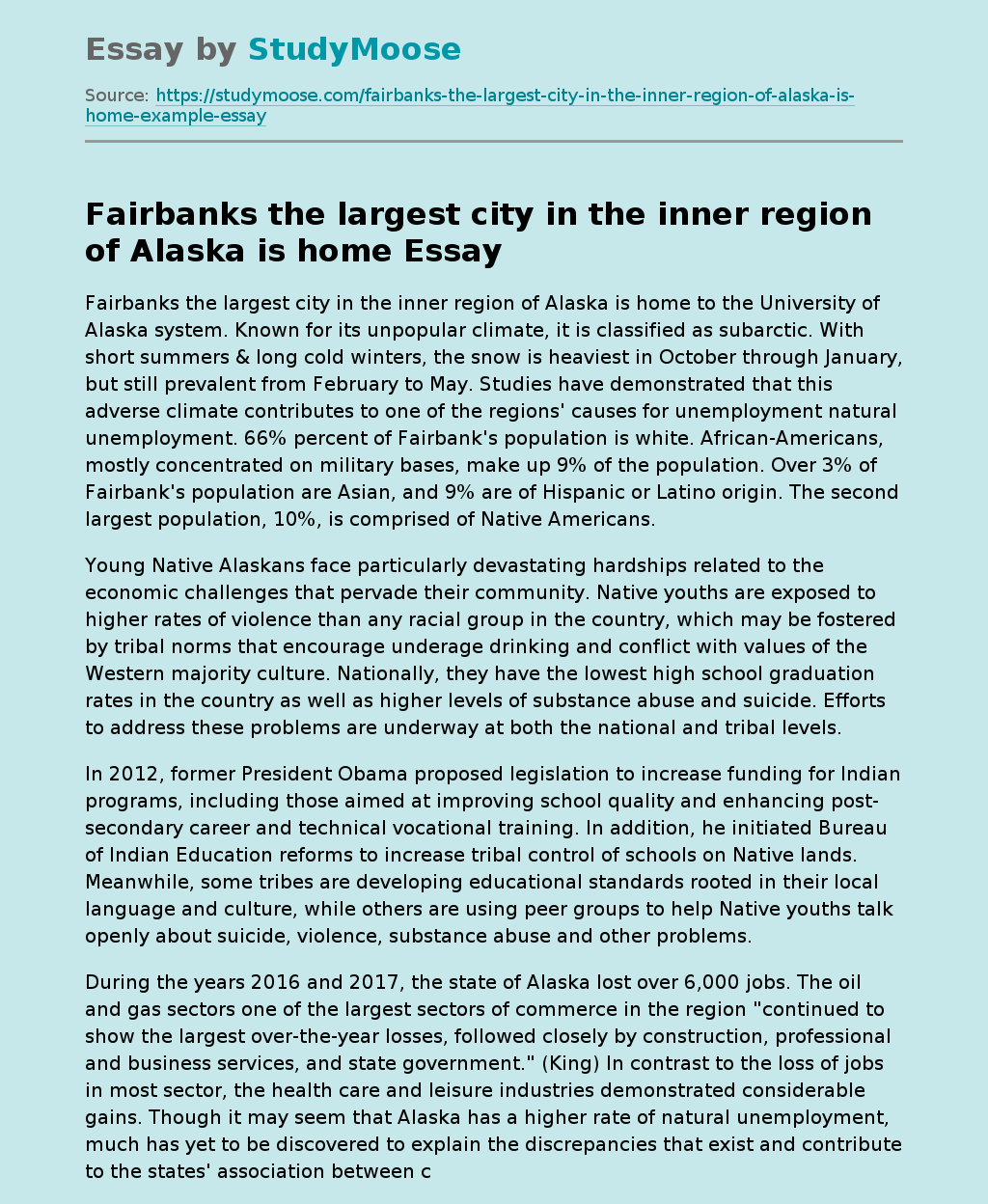