In the quote above, Faber describes books and their content to Montag, who as started to rebel against society through books. Faber was a very special and memorable person Montag met in a park a few years back. They had a conversation in which Faber recited some poems to him and because of that, Montag knew he was a rebel; a reader. He was the only person Montag could think of that would help him in his situation. Faber is the one that uttered this quote and is, by far, my favorite character in the book.

The way he describes books is so unique.

He uses many figures of speech to explain books and even society. Because of this, what he says usually has indirect meanings. Take this quote for example. This quote contains metaphors and personifications that describe Montag’s society and why books are burned. “Pores in the face of life” is a personification that represents the “problems in life.

” Pores on our faces are unwanted, ugly, problematic.

Same with the issues in our lives. It makes people unhappy, and brings torture in their lives. People are afraid of this; therefore, they are removed, avoided. Books reveal these “pores in the face of life,” so they are removed as well. That’s how Montag’s government controls Montag’s society. Through fake, hollow happiness.

The government digs a hole and buries the locked treasure box filled with everyone’s emotions (excluding happiness) and issues deep inside the hole. Heck, they even teach society to do that themselves! For the next sentence, “flowers” is a metaphor for ideas.

But, because the “flowers” are growing on other “flowers,” they become identical to it. Each and every “flower” grows on each other until the world is covered in identical flowers. A few are different, yes, but they slowly dwindle through the influence of the identical “flowers” and the disturbance of nature those “flowers” created. Those “special flowers” may transform into an “identical flower,” or, they die.

Journal #4
May 5, 2013
“…They were gone. The Hound was gone. Now there was only the river and Montag floating in a sudden peacefulness, away from the city and the lights and the chase, away from everything.” (Pg. 140, Fahrenheit 451)

This quote occurs after Montag kills Beatty and two other firemen, as well as burn the Salamander, after his house was burnt by them. Because of that, he is now being chased by firemen in helicopters and Salamanders, and a more efficient and high tech Mechanical Hound. Montag visits Faber one last time, receiving money, new clothes, and directions from him, and then runs into the river, which carries him away to safety. The Hound and firemen then loses track of him. This quote is where, in my opinion, the climax ends and the resolution starts.

It’s when Montag completes his transition from “mindless follower” to “independent thinker.” All with nature’s aid. Nature, at this moment, is shown as something that overrules technology. Even when it’s faced with the highest, most efficient technology that the humans can create, nature wins. Nature was able to bring Montag to safety from the Hound and the clutches of society and technology, to help him escape from everything that was holding him back.

The peace and relaxation nature provides help Montag complete his thinking process, which was incomplete because he couldn’t really think when he was surrounded by the fast-moving, overly colorful things, people that didn’t give a damn about anything except for themselves and their happiness, and a government that’s watching your every move. Not until he was completely separated from all that was he able to accept his new self and to move on; to make peace with his inner conflicts. Even he wasn’t able to accept and make peace when he was with Faber, someone he trusted and cared for. He was wounded by technology and healed by nature. 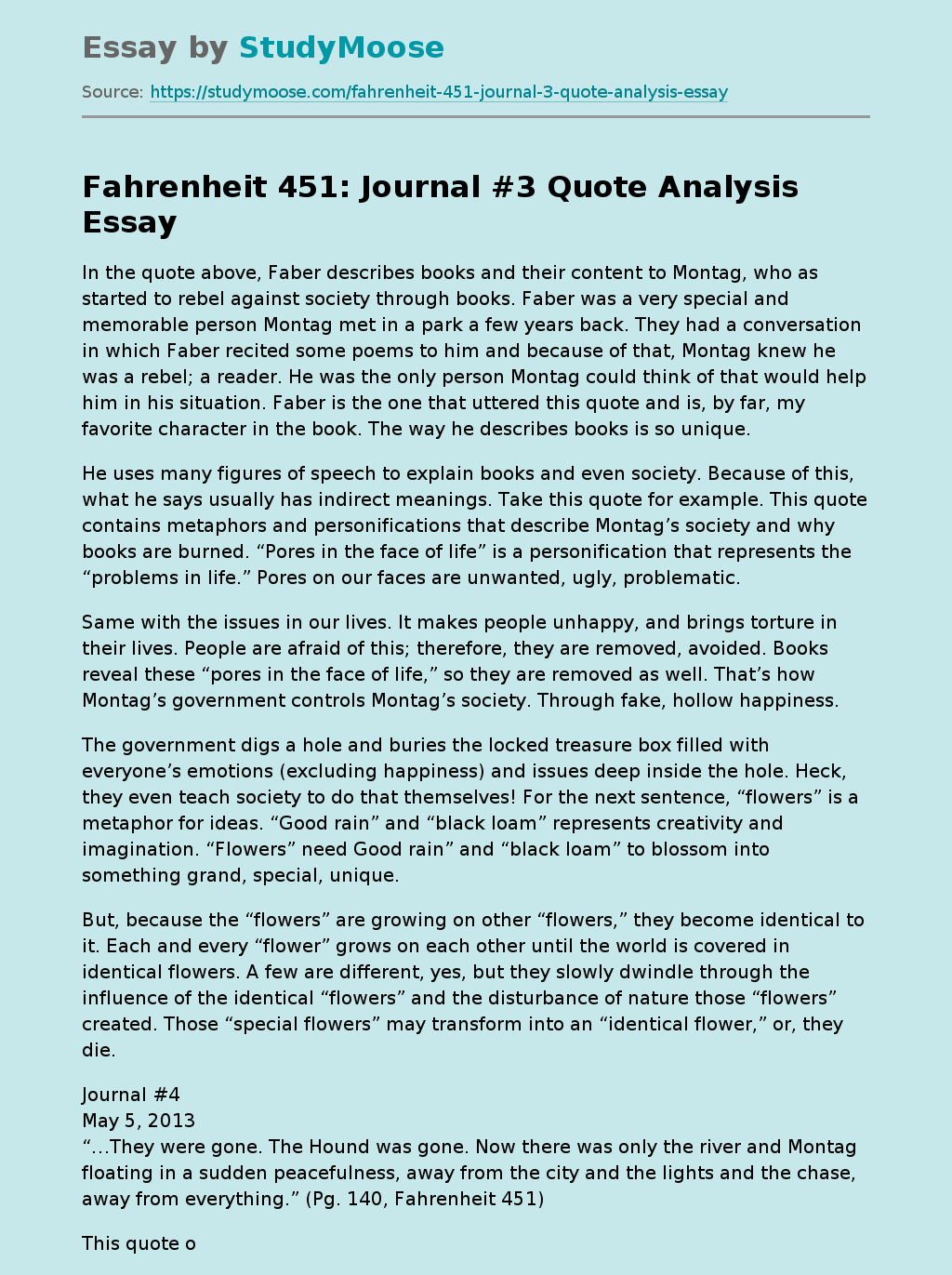