Fahrenheit 451, by Ray Bradbury is a futuristic view of a society and its people’s roles. This prophetic novel, first written and published in the early 1950s, is set in a future where books, and the ideas they represent and manifest, are burned to prevent disruptions in society. Furthermore, TV is everyone’s drug of choice, and independent thinking is basically illegal. Its central character, Guy Montag, is a fireman responsible to that society for ensuring those burnings takes place, but an unexpected chain of events leads him to question both himself and the society in which he lives.

Turn in your highest-quality paper
Get a qualified writer to help you with
“ Fahrenheit 451 and Brave New World ”
Get high-quality paper
NEW! AI matching with writers

Bradbury employs the extravagance of life today. In addition to the advancement in technology and numerous occupations, in order to show how life would become if the future drastically turns for the worse. In future world of Bradbury there are ironic reversals of roles for people and things that one would have once taken comfort in, such as the role of the fireman, or the nature of a dog.

Aldous Huxley also uses a similar concept, a society that is out of control, in his book Brave New World, which deals with a man living in a changed society. Brave New World by Aldous Huxley Published in 1932, is a futuristic society in which the individual is sacrificed for the state, science is used to control and subjugate, and all forms of art and history are outlawed. In short, the book fits into the classic mold of “dystopian” literature.

Huxley expects his readers to consider the role of science and literature of the future world.

Unlike Fahrenheit 451, Brave New World includes a group of people unaffected by the alterations in society, a group that holds religious beliefs and marriage, to compare and contrast today’s lifestyle to the proposed lifestyle of the future. One theme that both Brave New World and Fahrenheit 451 share is of individual discovery by rejecting a passive approach to life and dystopian society. In Brave New World the main characters the “Savage” John and Bernard Marx eventually realize the errors within their own culture. Guy Montag, the protagonist in Fahrenheit 451, starts to realize that society could be better, but due to some events that are out of controlled by advanced technologies, little value placed on the importance of relationships between people and the ban of reading books. Montag is forced out on his own, missing from society, to live his life with others like himself who have similar beliefs toward society. Marx, from a civilized culture, questions why his society lacks history. He wonders why his society lacks books and why they were banned just because they are old and supposedly is not an encouragement to the new culture.

By visited a reservation, a home of an “uncivilized” culture for savages, Marx is able to view first-hand information of how life and society use to be. Later he tries to combine some of what he saw into his work as an advertising agent. From this contrast with the other culture, Marx realizes more about himself as well. His view of things that confused him became more understanding. In “Brave New World” the citizens who are lucky enough to be in a higher class enjoy a variety of pleasures from a drug called Soma to sex with multiple partners. What is unique about the society in “Brave New World” is that the conflict cannot be discerned unless one digs deeper into the inner workings of the society. When that is accomplished one realizes that the society is built on the extreme views, such as abolishment of religion, that are only theoretical in our time but are practical in the novel. One of the most notable aspects of the novel is its use of scientific concepts. The society in the novel has become so reliant on science and technology that they have replaced the biological process of child birth with a more mechanized assembly line type of system. John, often referred to as “the Savage” because he was able to leave the reservation with Marx to go to London, also has a hard time adjusting to the drastic changes.

The son of two members of the modern society was born and raised on the reservation but, he learned from his mother the values and the customs of the “civilized” world while living in a unique culture. These concepts, human reaction to changes in their culture and questioning of these changes, are plain throughout the book. Huxley’s characters either conform to society’s demands for uniformity or rebel or begin a process of discovery; there are no people in the middle. Huxley makes his own views of man and society evident. He shows that those who conform to the “new world” become less human, but those who actively question the new values of society realize the truth about society and people in general. An example of this is Huxley’s views of drugs as an escape. The conforming members of society used widely a drug called soma, which induces hallucinations and escapes from the conscious world for two to eight hour periods. Those very few who did not, John included, did not because they thought the drug either unclean or an easy escape, one not needed in a society aiming at making life very simple.

By refusing to follow in this escape from reality, John is ultimately able to break from society and define his own destiny. Alike Brave New World, Fahrenheit 451 shares a similar theme of a character lost in his society. As Montag live his life he begins to realize things that he didn’t know existed and later is able to see through the government and the official policies of his society. He does so by gradually beginning to question aspect of society, which most people simply accept as fact. Montag’s job as a fireman serves as a setting to show how people passively accept the absurdity of their society. Instead of rushing to put out fires, as firemen do today, Montag rushes to start fires, burning the books and homes of people reported to have books. This was considered by most people to be a respectable profession. But on different occasions Montag took a book out of burning homes and want from time to time to read them.

From this, he begins to question the values of his society. Fahrenheit 451 also relates to Brave New World with the concept when characters escape from reality through the use of soma, Montag’s wife, and many other characters, escape through watching a sophisticated form of television. This television system covers three of the walls of the Montag’s TV has a control unit that allows the watchers to interact with the characters on the program. Another unit inserts Mrs. Montag’s name into specific places, thus creating the image they the characters are actually conversing with her. Montag’s wife, having only a few friends that she rarely sees, spends much of her day in this room, watching a program called “The Family.” This program was a government sponsored program that showed the viewers what life at home should be like. Furthermore in Fahrenheit 451, the problem that Montag’s wife takes the program as a substitute for reality. She is almost addicted to the program, much as people were with soma in Brave New World. Bradbury uses this television and its programs as a way of showing the escape he is worried people will look for in the future. Without actively questioning society’s values, he is concerned that people will look for ways to idly spend their time.

But like Marx, Montag chooses not to take part in this addiction. By refraining, he can see the affects it’s use has on the people around him, much as Marx and more importantly John the Savage saw in their culture. While sharing many similarities thus the have many differences. For instance, Montag’s society is used to constantly being at war. Even though the wars last only a day or less, they serve as an element of control for the ruling group and as another technological display. In contrast, Brave New World’s society features “peace.” The inhabitants have been conditioned to think that mindless pleasure seeking and stability are key to happiness. They view the controllers as taking care of them and preventing “unpleasantness” such as war. In true Bradbury fashion, Fahrenheit 451 warns more against the dangers of an overdependence on technology than it does against overreaching governments. Brave New World does feature technology being used to control, but Huxley seems to be more concerned with illuminating how ruling parties obtain and keep power through a variety of methods.

While the endings of both novels mirror the conclusions of other dystopian works, they are quite different from one another. Fahrenheit 451 concludes with reserved optimism. Montag has managed to escape Captain Beatty and the hound and even the destruction of the city and begins his life with the likeminded “Book People.” In Brave New World, John cannot live within the confines of his society and commits suicide. Both authors try to show that with life made easier by strong government control and a lack of personal involvement people will no longer spend their time thinking, questioning or developing their own ideas. Through these various diversions from normal behavior in society, Marx, John the Savage and Guy Montag are able to see the truths behind the societies they live in and are able to learn about themselves. And though their discoveries meant that their lives would be changed forever, the authors succeeded in showing that the key to humanity lies in thinking and questioning. These men found themselves through their own discoveries, much as Bradbury and Huxley hope others will do. 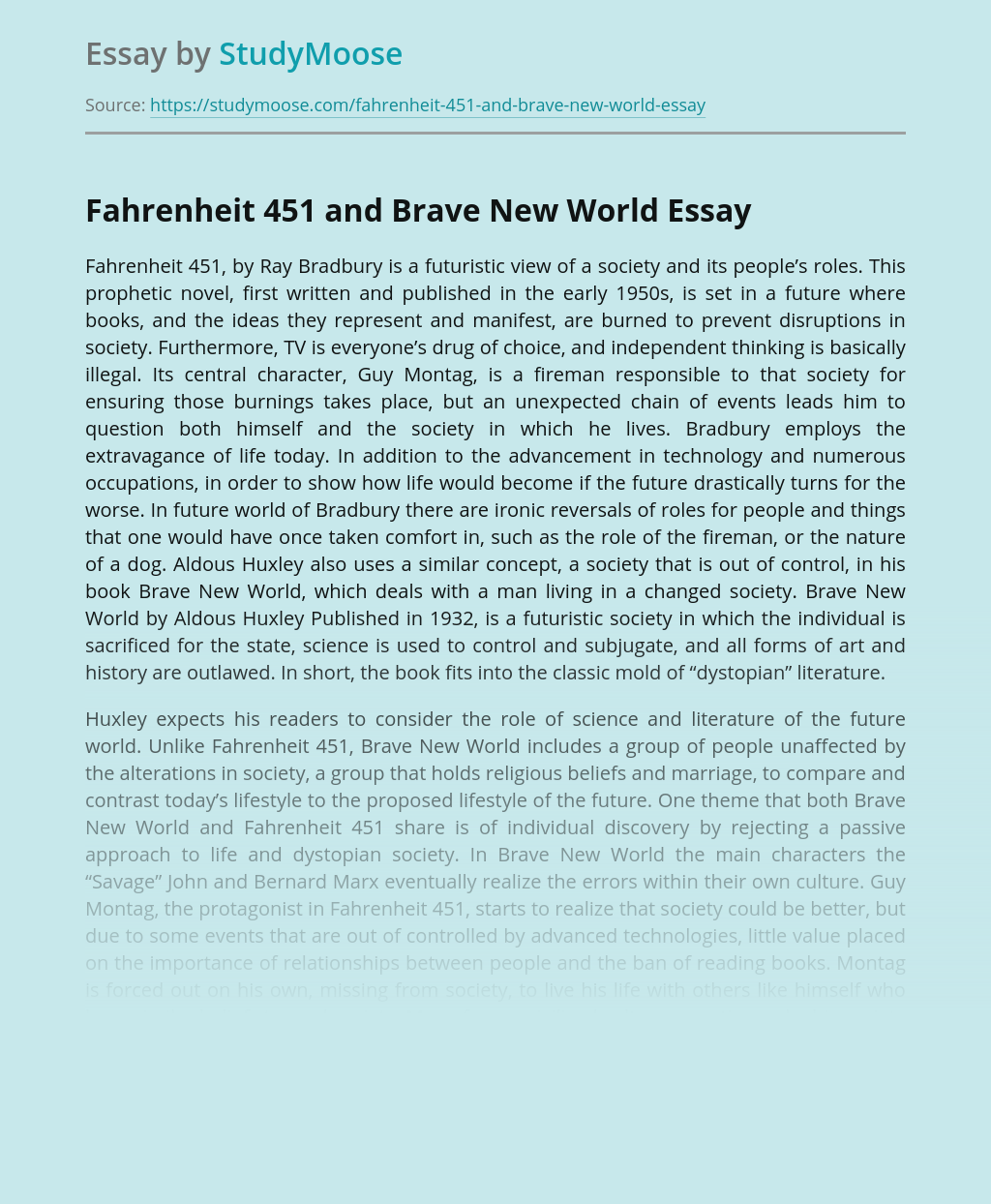 Turn in your highest-quality paper
Get a qualified writer to help you with
“ Fahrenheit 451 and Brave New World ”
Get high-quality paper
Helping students since 2015
Stay Safe, Stay Original