Niccolo Machiavelli was an Italian historian, politician, diplomat, and philosopher during the late 1400s early 1500s. Machiavelli is considered the father of modern political theory; and his theories are most prominent in his short book, “The Prince”. Machiavelli’s “The Prince” is main purpose is to tell rulers how to remain in power once they have gained it.

Don't use plagiarized sources. Get your custom essay on
“ Fahrenheit 451 Allusion to Machiavelli ”
Get custom paper
NEW! smart matching with writer

The best way to go about ruling according to Machiavelli is to simply rule well. However if this does not work Machiavelli recommends several different strategies such as the use of violence. During Machiavelli’s time his theories were not widely accepted and because of this he died in shame. Machiavelli acted on his thoughts and beliefs despite what society taught and believed.

However once time passed Machiavelli’s philosophies were better understood and accepted. Other philosophers began take portions of his philosophy to add to their own. This brought upon a new respected look to Machiavelli rather than the shameful look he died with.

The effect of the allusion to Niccolo Machiavelli in “Fahrenheit 451” is it connects Guy Montag to Machiavelli.

Montag acted on his thoughts and what he believed in rather than what society believed in. Montag believed books were necessary to society and that the information in books had to be memorized by someone in order to create a better future. The act of reading books was not accepted by society but in the future Montag would be remembered as a hero for doing so. In the same sense Machiavelli’s philosophies were not accepted by society but were created in order to make life better in the Italian city states. Machiavelli’s died in shame from his peers but was later on remembered for doing great things for society. Bradbury’s purpose of alluding to Machiavelli in “Fahrenheit 451” was to give a real life example of what his main character Guy Montag was doing. This allusion is effective if the reader has an understanding of who Machiavelli is and what he contributed to society. Without knowing what Machiavelli did for society the allusion would not be effective. 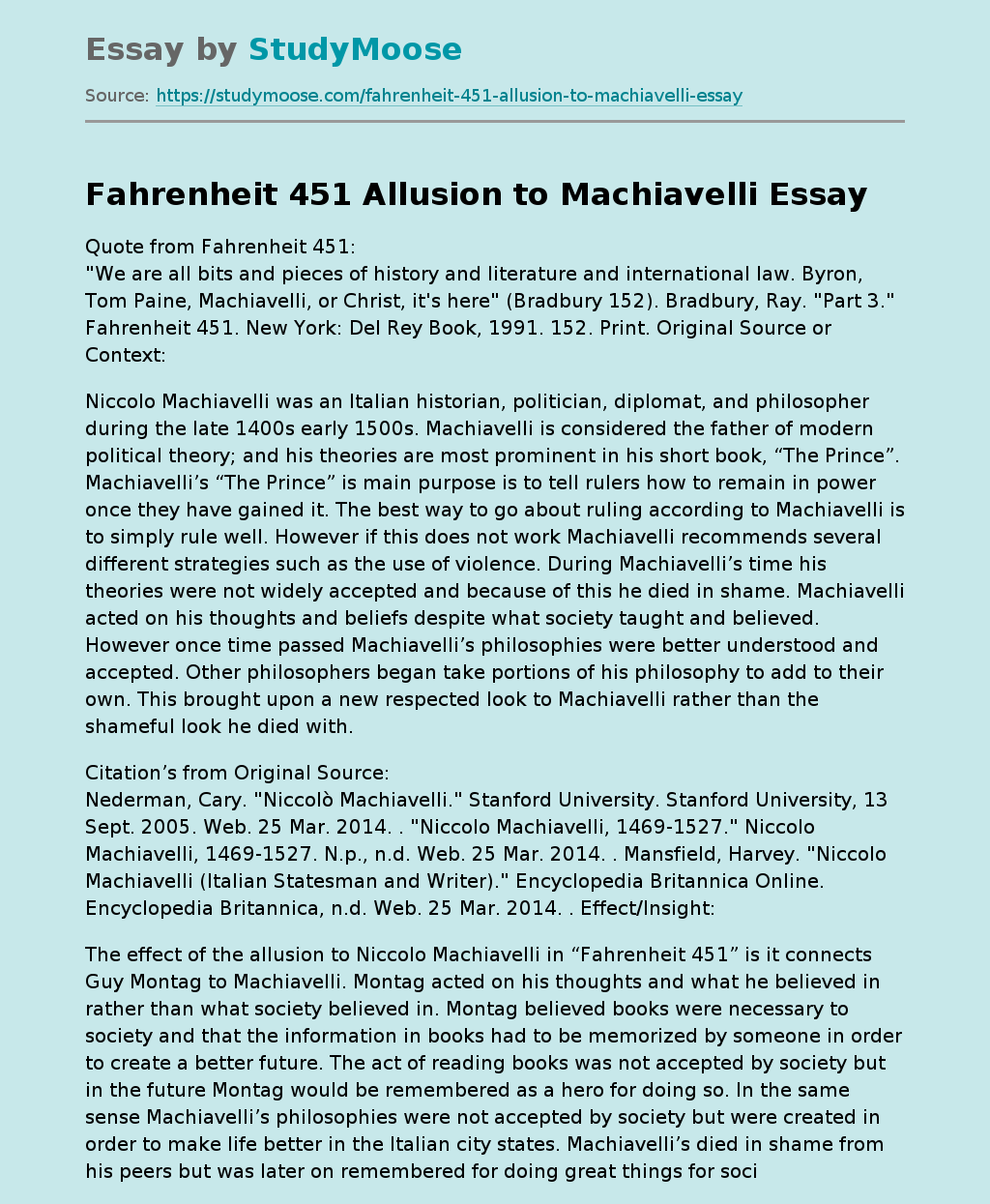