There is an undeniable certainty that in society there is a concerning amount of focus on how we look and what we eat. With magazines and blogs, such as Vogue and Goop, promoting diets and certain body types, of course there is pressure to look a certain way. These diets that are promoted, though have no scientific evidence that they actually are healthy for you and tend to rely more on pseudoscience, are called fad diets. These fad diets, such as the Clean Eating diet and Juice Cleanse, have shown to have a pattern of putting people into eating disorders.

Don't use plagiarized sources. Get your custom essay on
“ Fad Diets and Eating Disorders ”
Get custom paper
NEW! smart matching with writer

Because of this, fad diets should stop being promoted due to the consistent amount of eating disorders that follow behind them.

The Clean Eating diet is a fad diet that took popularity in 2018, described as “avoiding packaged and processed foods and eating food as close to its natural state as possible” (“Everything You Need to Know About Clean Eating” par 2). The diet’s actual food varies and depends on the actual person who is involved in it, as “some clean diets focus on plant-based foods and avoid all meat and dairy.

Others opt for seasonal, local, organic, non-GMO foods, and ethically pasture-raised eggs, meat, and dairy. Many clean foods are gluten-free. The strictest diets also cut out alcohol and caffeine” (“Everything You Need to Know About Clean Eating” par 5). The overall feeling of the diet is to try and make you feel pure and clean. Now, Juice Cleanses are meant to help you “detox” your body from “toxins” in which you only “ consumes only fruit and vegetable juices” (Stoddard par 2) for several weeks.

Research shows though that there is no need to “detox our bodies” though as “your body already has a highly effective system for removing toxins, principally the liver and kidneys” (“Do You Really Need to ‘Detox’? p 1), as stated by Irwin H. Rosenberg, a Professor of Medicine and Nutrition at Tufts University. The idea of detoxing our bodies is extremely toxic to our mental health as that implies there is something disgusting with who are and how we look.

Many activivants who partake in such diets are shown to usually regret it due to the fad diet spiraling actually unhealthy eating habits. Two activants, Hannah Matthews and Naomi Teeter, tell us their experience with the Clean Eating Diet. Hannah Matthews discusses in her article how a “rigid diet became an all-consuming obsession” (Matthews par 1), specifically orthorexia and anorexia. Orthorexia is a eating disorder term coined in 1998 in which a person is “compulsively checking nutrition labels, an inability to eat any food that isn’t designated ‘pure’, obsessively following ‘healthy lifestyle’ bloggers or social media figures, and showing an ‘unusual interest’ in what others are eating” (Matthews par 8), an eating disorder is shown to be connected to the Clean Eating diet. Matthews states that by trying to “restrict” (Matthews par ) her eating to make it “pure” (Matthews par 10), all she actually was doing was “imposing nutritional deficits” (Matthews par 10) on her body. Christy Harrison, a dietitian and certified eating counselor, claims that “orthorexia can often lead to anorexia” (Matthews par 9), and she discusses how many of her clients get “so afraid of foods they see as ‘processed’ and ‘unclean’ that they end up eating hardly anything” (Matthews par 9).

Hannah Matthews goes back to discuss how her orthorexia spiraled into anorexia. She claims that she began to show all the signs of anorexia including “heart irregularities, dizziness and exhaustion, an inability to focus, and the loss of my period” (Matthews par 13), and it wasn’t until a friend stepped in that she got officially diagnosed with anorexia nervosa (Matthews par 13). The doctors told Matthews that if she didn’t find a way to balance her diet, her “restrictive diet could end up killing her” (Matthews par 13). Since recovering from her eating disorder Matthews has tried to “clarify widespread misconceptions about the bad science of detoxes, cleanses, and elimination diets” (Matthews par 23), and keeping her loved ones safe. Naomi Teeter shares a different, but still tragic, story with us. Naomi Teeter, a nutritionist and weight loss coach, talks about how she almost gave her husband an eating disorder. Teeter discusses how she was “eating super-clean 90 percent of the time and worked out every morning” (Teeter par 1) while she first met her husband, Adrean, stating that she was also going through orthorexia without even knowing it.

Teeter and her husband often ate meals together but Teeter would “openly shamed Adrean for poor food choices, which only upset him” (Teeter par 6). She would get a “look of disgust” (Teeter par 7) everytime Adrean ate anything sugary and sweet, simply due to her obsession with “proper nutrition” (Teeter par 2) caused by her orthorexia. Soon into their relationship, Teeter noticed how her husband “lost about 30 pounds” (Teeter par 9) and she assumed that this was all because of her “good influence and not the fact that he had stopped eating junk food to win my love and approval, things he thought were inextricably linked” (Teeter par 9). Soon, these food obsessions became the source of arguments for the couple. Adrean confined to Naomi how discussing food with her made him “bothered” (Teeter par 10) and “made him feel guilty for his food choices” (Teeter par 10). Naomi Teeter states how she felt as though “he was cheating on me with food”, and then goes into depth of the secret binge eating the couple began to face (Teeter par 13). Soon, the couple talked and worked things out. Teeter noticed that as soon as she stopped obsessing over what they were eating, how much better both of them felt (Teeter par 16). “There’s nothing wrong with wanting to get healthy and make better, smarter food choices” (Teeter par 18), states Teeter, “but when that desire turns into an obsession, it’s time to take a step back and re-evaluate whether you’re actually doing more harm than good” (Teeter par 18).

With influential websites, such as Gwyneth Paltrow’s Goop, trying to sell you that such fad diets are the healthiest option for you, there is no wonder that people tend to fall into these dieting scams. As stated by EatingDisorderHope.com, “With the diet industry being a billion dollar business, many of their profits are made by promoting diets that promise instant results and fast weight loss” and that “while it may be tempting to follow popular diet scams, many of these trendy diets are not only ineffective but dangerous to one’s physical health” (“Dangers of Fad Diets.” par 1).

Fad diets tendency to spiral young women into detrimental eating disorders is a disgusting reflection upon our society and how we judge women on what they eat and how they look. By getting rid of the promotion of these pseudoscience based diets and instead promoting actual healthy diets that are approved by doctors, we may be able to combat the epidemic of eating disorders within young women and overall improve how women view themselves. 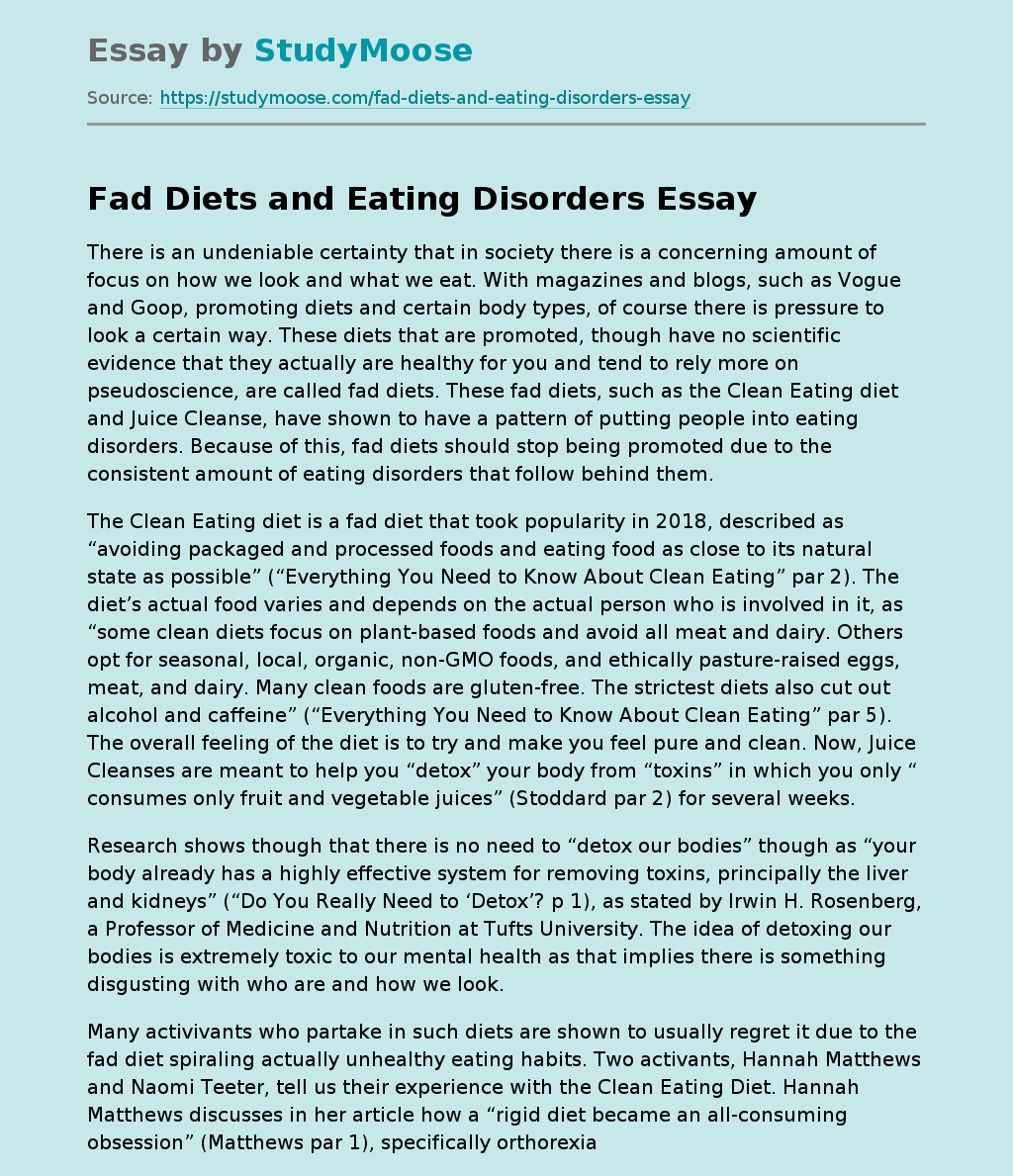