Facts and Rituals in Canada

Canada is a cultural mosaic, meaning that it’s a collection of several subcultures. Whether they are regional, aboriginal or ethnic. Because the two official languages are English and French and because they are used for day-to-day life in most parts of the country, Canada is like a melting pot with strong connections with the rest of the English- and French-speaking world, although this differs from region to region.

For instance, some Government policies tend to differ from those in the US.

Don't use plagiarized sources. Get your custom essay on
“ Facts and Rituals in Canada ”
Get custom paper
NEW! smart matching with writer

E.g. publicly funded health care, higher taxation to distribute wealth and so on. Historically, Canada was influenced by British, French and aboriginal cultures and traditions. Through those cultures, and their language art and music, the aboriginal subcultures still influence the Canadian identity. Many Canadians value this multiculturalism and see their multiculturalism as part of their national heritage. The Government even protects the creation and preservation of the Canadian culture through programmes laws and institutions. But even though they are so proud of their own cultures, American media and entertainment are still popular, if not dominant, in the English speaking parts of Canada.

Also Canadian cultural products and entertainers are very popular in The States and even worldwide. Canada’s official national sports are ice hockey and lacrosse. Hockey is a national pastime and the most popular spectator sport in the country. Seven of Canada’s eight largest metropolitan areas (Toronto, Montreal, Vancouver, Ottawa, Calgary, Edmonton and Winnipeg) have franchises in the National Hockey League (NHL), and there are more Canadian players in the NHL than from all other countries combined.

The name Canada comes from the St. Lawrence Iroquoian word kanata, meaning “village” or “settlement”. In 1535, indigenous inhabitants of the present-day Quebec City region used the word to direct French explorer Jacques Cartier to the village of Stadacona. Cartier later used the word Canada to refer not only to that particular village, but also the entire area ; by 1545, European books and maps had begun referring to this region as Canada.

Canada’s two official languages are English and French. English and French have equal status in federal courts, Parliament, and in all federal institutions. Citizens have the right, where there is sufficient demand, to receive federal government services in either English or French, and official-language minorities are guaranteed their own schools in all provinces and territories. English and French are the first languages of 59.7 and 23.2% of the population respectively. Approximately 98% of Canadians speak English or French: 57.8% speak English only, 22.1% speak French only, and 17.4% speak both. French is the official language in Quebec. More than 85% of French-speaking Canadians live in Quebec.

Ontario has the largest French-speaking population outside Quebec. New Brunswick, is the only officially bilingual province. There are 11 Aboriginal language groups, made up of more than 65 distinct dialects. Of these, only Cree, Inuktitut and Ojibway have a large enough population of fluent speakers to be considered viable to survive in the long term. Several aboriginal languages have official status in the Northwest Territories. Over six million people in Canada list a non-official language as their mother tongue. Some of the most common non-official first languages include Chinese (mainly Cantonese; 1,012,065 first-language speakers), Italian (455,040), German (450,570), Punjabi (367,505) and Spanish (345,345).

Facts and Rituals in Canada. (2017, Jan 22). Retrieved from https://studymoose.com/facts-and-rituals-in-canada-essay 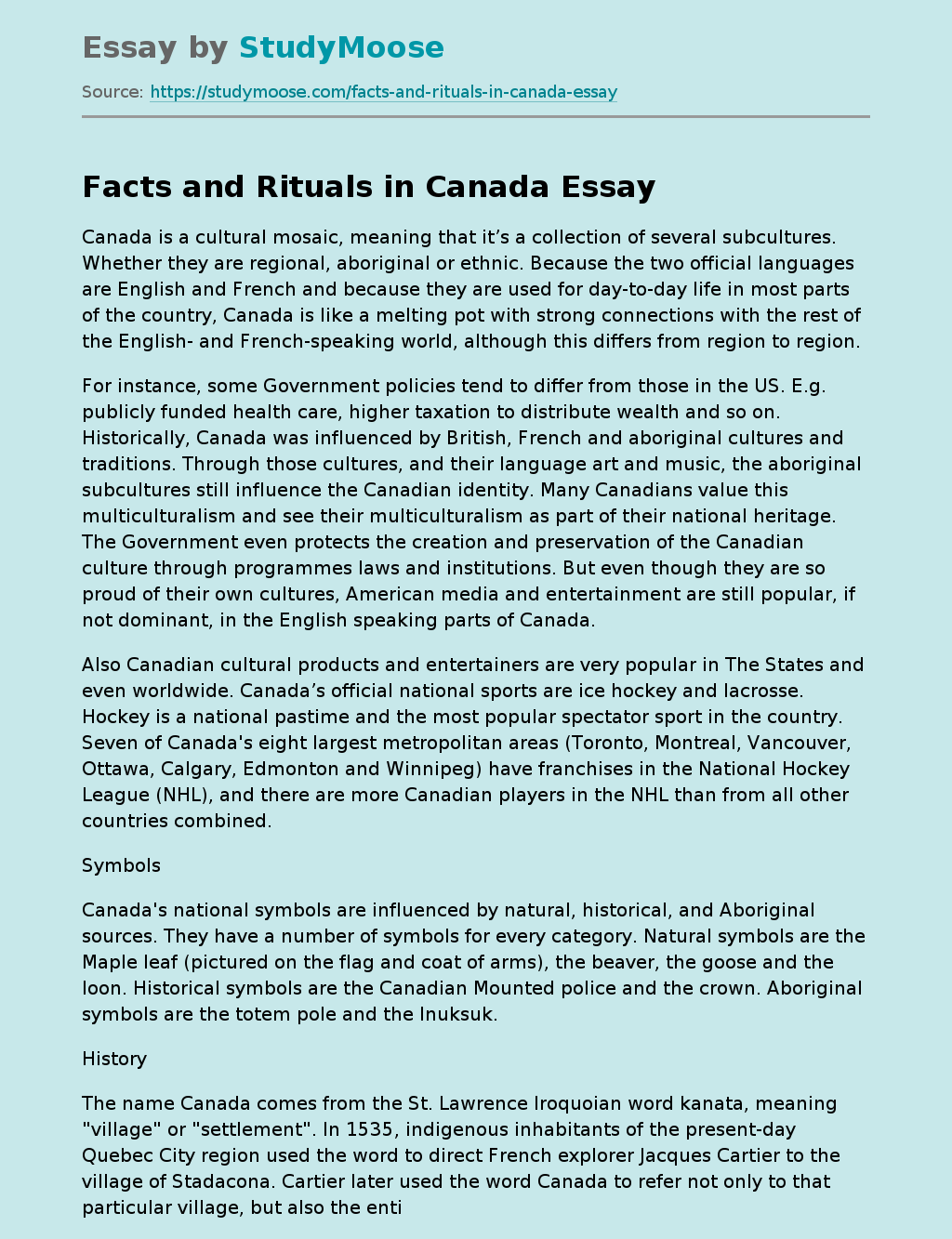