Factors that influence an individual’s self-concept

Sharon is a 17 year old girl at the stage of adolescence, to add on to that she’s also a single mother of two children. Throughout her life she has had to grow up more than others as she has a family of her own to look after as well as her educational life which will determine how her future will turn out later.

Turn in your highest-quality paper
Get a qualified writer to help you with
“ Factors that influence an individual’s self-concept ”
Get high-quality paper
NEW! AI matching with writer

In this assignment I will state as well as outline factors that can influence the development of Sharon’s self-concept. Before I continue I will be discussing self-concept, self-esteem and self-image in terms of Sharon. Self-concept is how Sharon views herself in terms of her strengths and weaknesses; self-concept is what she thinks of herself as… While self-esteem is how much Sharon values herself, in other words if Sharon had a high self-esteem she would be more likely to believe herself as an extremely likeable person.

Lastly, self-image is basically the overall image Sharon has of herself, what she believes her own image portrays.

Especially at the stage of adolescence, girls like Sharon tend to be extremely self-aware of their own image and how they portray themselves towards the public. This is because as Sharon gets older, she’s more likely to care about how other people think of her. Age influences Sharon’s self-concept because as she gets older she’ll tend to behave in a certain way when she thinks she doesn’t belong anywhere, to be able to fit into everybody’s standards.

As Sharon gets older, she’s more likely to develop her own self-image however peer pressure will prevent her from doing that as she will feel more pressured into fitting in and more fearful of being rejected by the majority.

Appearance is a big influence on Sharon’s self-concept, as appearance also affects your self-image as well as self-esteem. During the stage of adolescence, teenagers like Sharon tend to be more critical to themselves more therefore their way of judging tends to be more harsh; depending on Sharon’s judgment of herself it’s more likely that she will either have higher self-esteem or lower self-esteem: this is because at this stage teenagers like Sharon tend to seek out their insecurities more and are less likely to point out their strengths since they are more focused on trying to fit in…And these days teenage girls care more about being physically perfect and trying climb up the social ladder that they sometimes forget about their own unique qualities and try to forge a completely whole image which fits completely into society’s standards. However looking back at Sharon’s past, it’s more likely that she’s to have a more negative self-concept, self-image as well as self-esteem as not only has she given birth once but twice and pregnancies can cause physical side effects such as stretch marks; now adding on to the stress Sharon has to face from trying to fit in she also has to face the physical side effects of giving birth which can cause her self-esteem to deflate which will overall affect her self-image.

Gender influences Sharon’s self-concept because Sharon depending on how she’s been brought up may act upon society’s expectations towards male and female. When it comes to females, they are expected to be more of the submissive type that tend to do the domestic tasks around the house and do jobs related to health care more than physically strenuous jobs. Unlike males who are suspected to be more dominant, strong and more into jobs which doesn’t require emotional involvement but more of physical and intellectual involvement. When it comes to gender’s influences to Sharon’s self-concept, she will tend to stray away from doing physically strenuous activities as a girl she’s not expected to be strong and fit like boys but fragile and slender because it suits society’s overview on femininity. Overall adolescents like Sharon will feel more pressured in trying to fit into their gender roles.

Culture affects our self-concept because it could change Sharon’s values and views of herself depending on what kind of culture she grew up into. Culture teaches Sharon a lot about how to do things such as what kind of clothes to wear, how to react in different situations, and what food she should be eating; in other words it encourages Sharon to have different views and improves her self-concept depending on what kind of culture we grew up into. Culture mostly influences positive self-concept as culture is mostly not aimed to degrade our self-image but to improve our overall views on ourselves by gaining confidence and learning how to do and view things in a certain way. For Sharon since it seems that she hasn’t moved around much then it means that she’s been able to fit in to her culture quite well, and may not have much difficulty making herself accustom to other people’s culture; the way they were brought up.

Culture affects self-concept because self-concept involves things such as how clever you are, and the approach to education is something that’s viewed differently from culture to culture. The Asian culture might be more uptight and committed to education, in contrast to the Western culture’s less uptight but nonetheless committed approach to education. The downside of culture is that if Sharon was to find her culture and another person’s culture clashing together then it could cause a negative influence towards her self-concept as this could mean that they won’t have the same views or attitudes to certain things, which could cause Sharon’s overall performance to a disadvantage as it’ll make her more self-conscious and less confident in the way she has been brought up as well as feel anxious as she might not be able to get her views across easily.

Income influences Sharon’s self-concept because depending on how much income Sharon or her mother’s income might be it might change her views towards money and expenditure as well as values towards other factors such as education because education usually is the key to a better occupation which could lead to higher income. Especially when Sharon’s a young single mother with most likely no high income at all, she’s forced to sacrifice some of her own self-indulgences to be able to provide for her children as well as aid in monthly bills with Janet as Janet can’t always provide financial security for her family.

Due to Sharon’s current situation she’s more likely to have a negative self-concept, she will often find life more difficult and find less enjoyment out of trying to maintain enough income to fend for her family as this will reduce Sharon’s time for herself as well as time to hang out with her friends and family. However since Sharon not only gave birth to Aimee but Fergal, this could indicate that there are positive influences to income when it comes to Sharon’s situation as this could mean Sharon’s willing to cope with the problems of being a single mother and try to be successful at it, meaning she must have a higher self-esteem to be able to have a high motivation.

Media plays an important role in influencing Sharon’s self-concept, media tends to encourage adolescents such as Sharon to come up with unrealistic ideals. This could cause Sharon to go through extreme measures such as dieting to get the perfect body, as well as completely change how she behaves because she might not be portraying the feminine image girls should have. The media tends to exaggerate flaws out of people that adolescents like Sharon feel the need to change due to the growing feeling of insecurity about their own qualities which causes low self-esteem and self-image; because of this Sharon may feel tempted to compare herself with friends and other people and be increasingly self-aware of other people’s opinions. Depending on how much self-esteem Sharon has towards her self-image she’s more likely to change her self-concept in order to meet the unrealistic norms the media has brought out from trying to maintain consistency with the idea of perfection.

Education affects Sharon’s self-concept because education is a gateway to Sharon’s overall financial outcome as well as lifestyle in the future; it also gives Sharon the ability to choose. However since Sharon’s a single mother education would have to be postponed as her life now revolves around her two children: Aimee and Fergal. Since Sharon’s at the age of 17 she’s still in progress of acquiring her qualifications, doing her A-levels then going to University. Unfortunately her current situation will prevent her from working to the best of her ability, this may affect her self-concept as she’ll be less motivated to study and learn.

She may also lack self-esteem because she might not be able to understand what’s going on in her lessons and what needs to be done. Her teachers might start to discourage her from continuing the courses she does due to bad grades and overall her self-concept will change negatively. Being a mother at the age of 17 is hard to hide, in such a big environment such as school and being pregnant at such a young age can be looked down upon which could cause Sharon to get bullied at school. Bullying is a dilemma that people have always tried to prevent but it still goes on today, it could cause a lot of damage to a person’s self-concept especially Sharon’s.

Sharon’s financial status may prevent her and her family to live in a peaceful environment where pollution and violence is rarely an occurrence. This will affect her self-concept as Sharon will start to compare her situation with others that may have a better lifestyle bringing her self-esteem and self-image down. With her current situation she’s more likely to be living in a more polluted environment, meaning the environment she’s living in would be uncontained and unclean. This will be a potentially damaging environment for her children’s health thus affecting her self-concept negatively.

When it comes to socialisation Sharon’s lifestyle will affect her greatly, as she’s a busy mother who would have to prioritise her children first before personal indulgences. This will affect her self-concept and self-image because she will have less time to hang out with her friends and socialise as well as even have enough time to take care of herself or go shopping. Sharon’s self-confidence will also decrease drastically as she compares her friends’ social life with hers, because Sharon already has a family while her friends are still at their adolescence stage having lots of freedom and less responsibilities to take.

Factors that influence an individual’s self-concept. (2016, Apr 29). Retrieved from https://studymoose.com/factors-that-influence-an-individuals-self-concept-essay 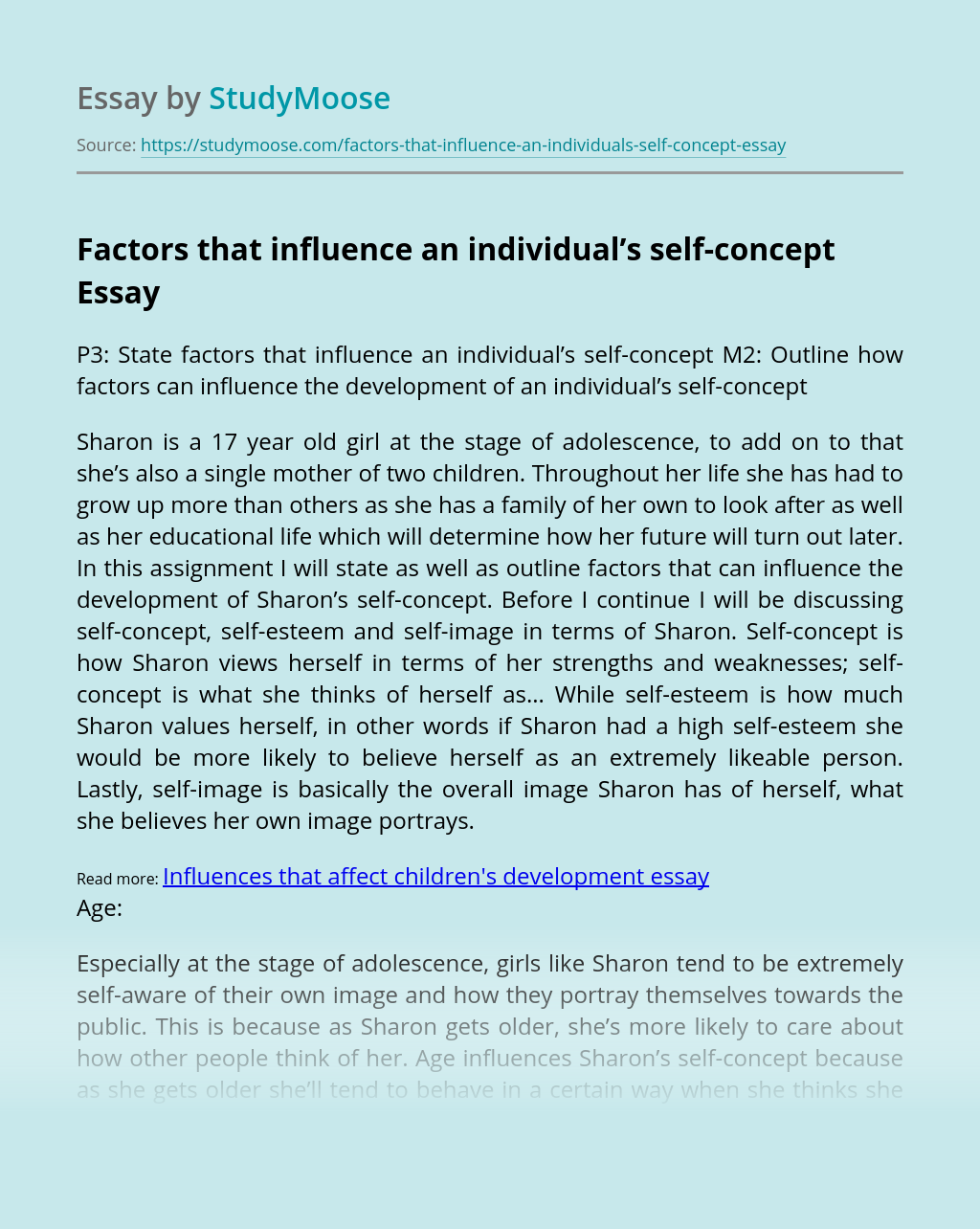 Turn in your highest-quality paper
Get a qualified writer to help you with
“ Factors that influence an individual’s self-concept ”
Get high-quality paper
Helping students since 2015
Stay Safe, Stay Original