Students drop out for many reasons. Sometimes, Study is not their number 1 priority in his/her life. Some incident that causes their drop out is their behavior. One of the most important is student engagement, which includes students’ active involvement in academic work. Rumberger (2008) In addition, drinking alcohol, smoking and taking drugs can affect their attitude. Having friends who engage in criminal behavior or friends who have dropped out can also affect them as a student and as a person. Attitude. This is when the students are being influence by their friends who are bad influence. Background. Dropout rates are generally higher for males than for females, and they are higher for Blacks, Hispanics, and Native Americans than for Asians and Whites; yet these differences may be related to other characteristics of students as well as characteristics of their families, schools, and communities. Some other students are saying that classes weren’t interesting.

47% of the drop out student doesn’t find classes very interesting.

35% percent said that they quit schooling because they are failing. 32% percent can’t afford schooling and have many problems in money. 69% weren’t motivated to work hard. Some other had a hard time understanding and cooperating with their teachers. According to wiki.answers.com, There’s an unknown user who answered why students of today drop out said that, Dropping out of school is an issue faced by many teens today. I feel that there are many reasons why students want to and do dropout of school.

Due to my research students use dropping out of school as a way to escape from their problems. Further in this paper I will provide you with the information telling you what I recollect the problems are

One of the greatest problems students have in countries such as the US is dropping out of school. I feel that the most average reason for students turning to dropping out is because of them being effected by their family problems. One way they could become effected is by their family, is having abusive parents. Students might feel if they stop going to school it could be the only way to get back at parents that act in such manner. Another reason for students dropping out of schools is because of their family income. Everyone knows that young people these days have the thought that they need flashy and expensive clothing to go to school. Students could also have the thought because of misguidance. They could have a family that has been raised on relying on something other than school for a key into happiness.

Others think if students have some desire for school one will work their ups and downs out throughout the school years. See it is possible for family to be the problem that makes some drop out. If a student does not feel well, it is most likely that the student’s performance decreases. I feel if the student has no desire what so ever for school there’s no way the student will make it through school. School is another object that forces students to give up and dropout. Changes of the family environment might also effect the students progression, if a parent dies, another child is born, the student has a child, the circumstances change significantly. And some teaching staff teaches to fast and with the teacher moving too fast could cause failure in grades and that also makes students give up.

Anything that causes a student to feel unsafe could make them dropout. Additionally, teachers could be the reason as well. The student is the last reason I will tell you about but is not the last reason known. If you want a good future go through school and there’s a 90% percent better chance your life will turn out better. The other students gets the student to dropout to see what happens to them because they really is the one who wants to but isn’t sure what will happen. No matter what your problems are you shouldn’t drop out of school.

Teachers could be teaching in a way that’s not making the course interesting, which also could make the student bored with the course and not getting any motivation from the teaching staff leads to less attendance of the course. In the Philippines, The Department of Education (DepEd) announced that drop-out rate in the Philippines decreases. Ina Hernando-Malipot (2011) In her article in Manila Bulletin, included that Armin Luistro said “Our end-goal is to retain the poorly schooled and those who are in danger of dropping out because of difficult social and economic situations and provide them quality education,” Luistro the Secretary of DepEd explained.

Factors that Affect Drop-Out Rate in Education. (2017, May 24). Retrieved from https://studymoose.com/factors-that-affect-drop-out-rate-in-education-essay 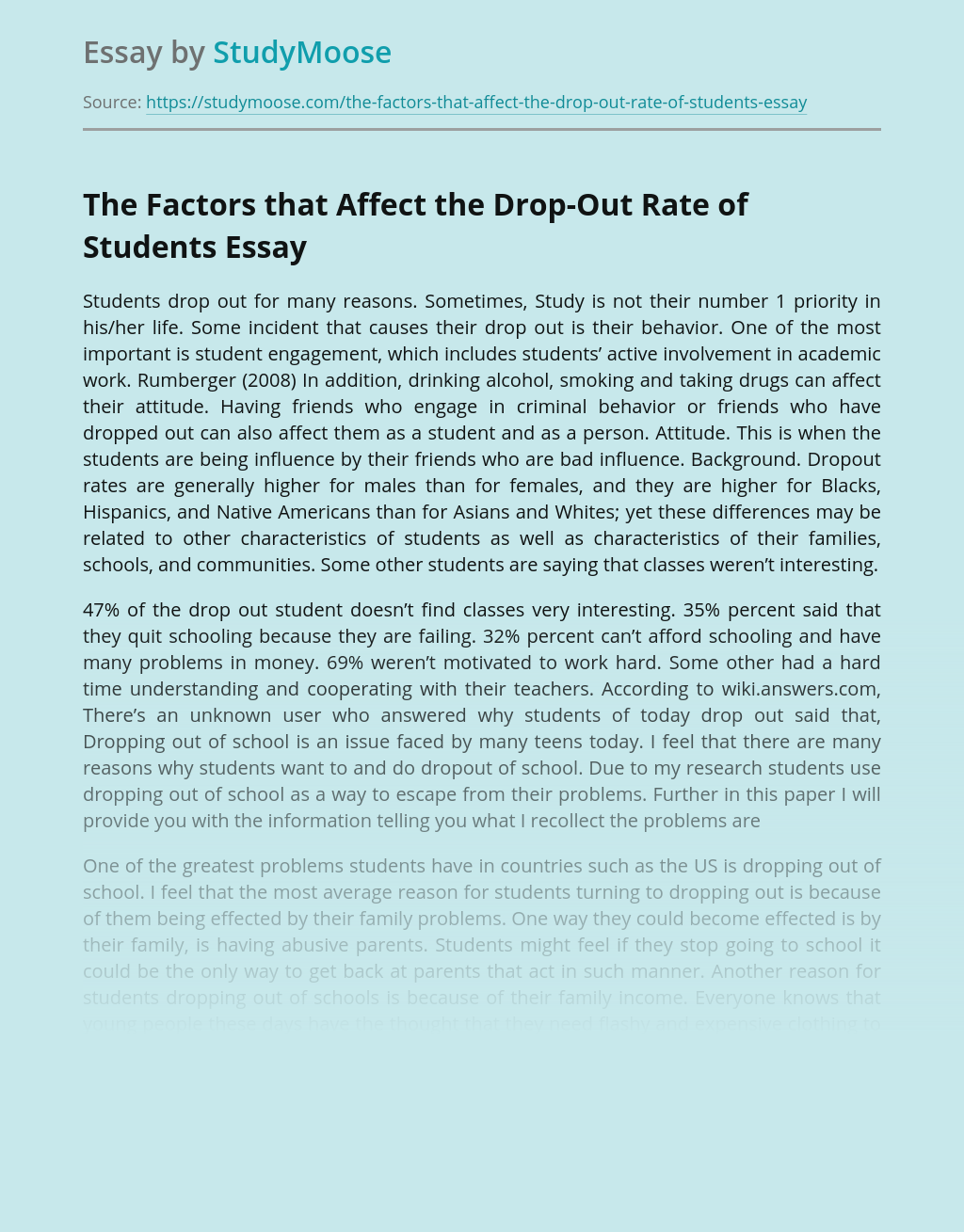