Factors Contributing to Youth Violence in US Today

Youth violence is increasing and quickly becoming one of the major concerns in American today. Frequent youth violence can be found at schoolyard, at home, outside, and everywhere in the community. Why don’t people ask themselves what is making the youth today so violent, and is there anything they can do to stop this trend? Youth violence is a serious issue, and there are many factors that contribute to youth violence; they are domestic violence, negative media and gangs.

The truth is if a child grows up in an unhealthy household then there will more chances for he or she to grow up to be a violent person.

Don't use plagiarized sources. Get your custom essay on
“ Factors Contributing to Youth Violence in US Today ”
Get custom paper
NEW! smart matching with writer

Every day, a child witnesses an act of violence not only on television, but also in their own home, from their parents. A home is supposed to be a safe place where children learn how to love and relate to others. However, if they usually see violence in their parent’s relationship, they would assume that all relationship is always filled with violence.

As a result, they look at their parents and think they have the right to do that too, so they will not care what parents have to say to them and just get ideas from the streets which are not good. That is why they are dropping out of school and just hanging out with their friends, which only brings them into trouble, lead to violence.

How violence in the media contributes to the many other factors that lead to violent and aggressive behavior in youth? Most of the violence is directed mainly many children and adolescents.

However, not every kid who partakes of violent TV shows, movies or video games will become a violent criminal. Two common effects from media are imitation and fear. Today’s youth are constantly surrounded by significant acts of violence on TV, in movies, and in video games. Many experts in education and psychology believe that children are acting out what they see. The acts can easily be reacted due to constant exposure. For many children, TV and video games have become their primary role models. Unless parents and teachers take the time and responsibility to teach children respectful values, they will learn problem solving, coping skills and conflict resolution from video role models. Another result is they would be fear from watching unrated movies. Some movies that are meant for adults can be quite scary for younger kids, which can cause problems later on in the socialization process.

The last common reason that causes youth violence is gangs. There are many of teenagers in gang, who come from bad friends, friends in gang. The only thing they want when join there is just to prove them, to be cool; even they have to fight or kill someone to get in it the gang. That is why they are always ready to do stupid things without thinking about the results, just to let their friends know that they are acting like a hero, a big brother in their group. Another reason is they are always thinking that they are lonely in this world, they have to do everything to survive and their gang friends are only people, who they can do everything and die for. For example, there was a horrific shooting in a Vietnamese restaurant a few months ago. A young guy came into the restaurant, and then he killed all the people around a table in the corner. The reason of his action was he hated a guy in the group of those people.

The list of contributing factors to violent behavior in youths is never ending. One thing that the society should remember though is that not just one single factor can be linked to youth violence. To prevent youth violence enlarge, not only an individual do, but the society also has some responsibility to it. For example, the society should limit games and videos that have many violent scenes; parents should take care of their kids much more than at the present.

Factors Contributing to Youth Violence in US Today. (2019, Aug 19). Retrieved from https://studymoose.com/factors-contributing-to-youth-violence-in-us-today-essay 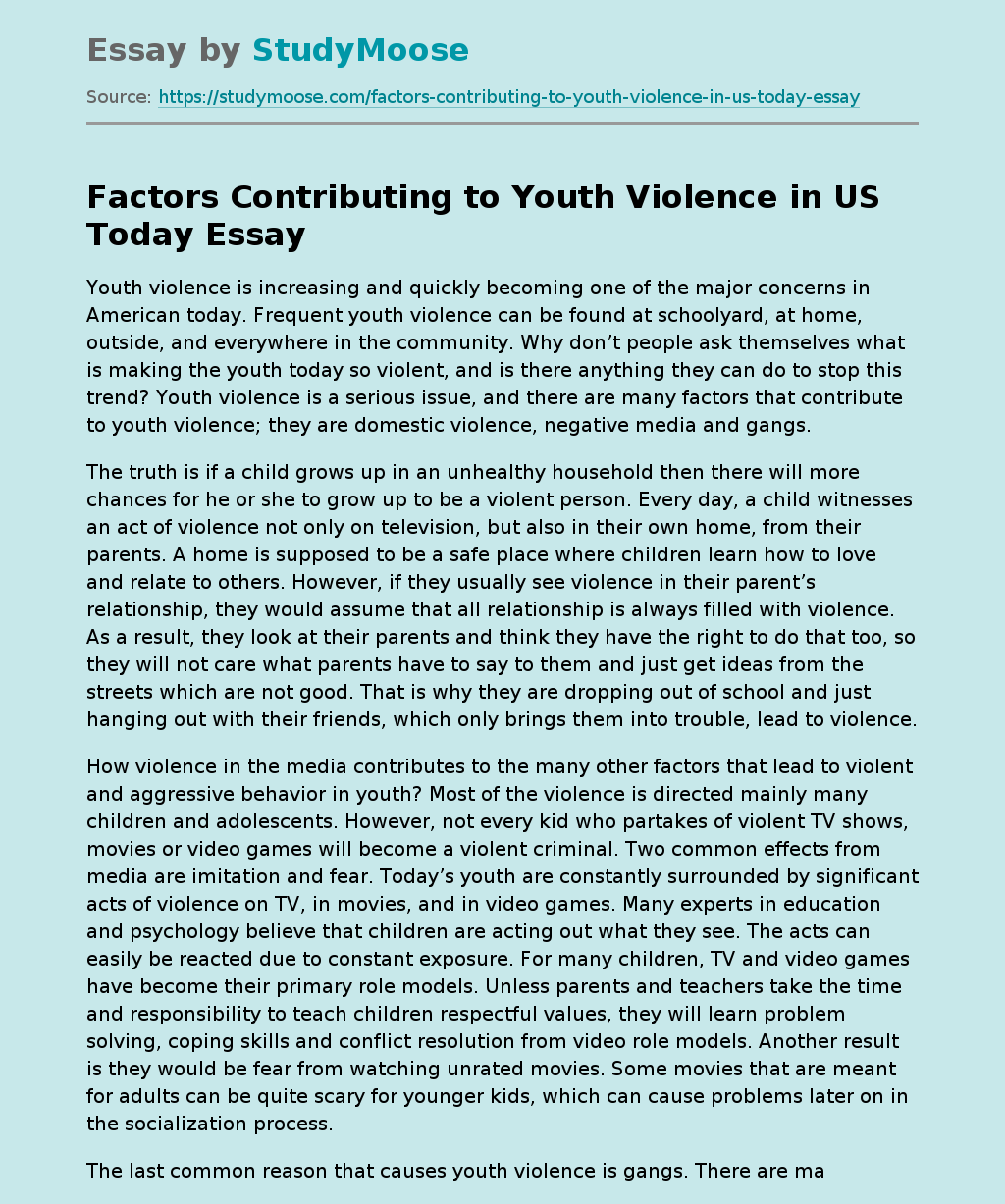