In this report I will talk about how factors affect travelling to long haul destinations and in this I will include: time zones, climate, seasonality and extreme climate conditions, travel restrictions, entry and exit requirements, health issues and social situations. In this report I will cover all of those with destinations such as : Australia, North Africa, Thailand, Indonesia, South Africa and few more. Time zones have a big effect on travelling to long haul destinations as people can get a jet lag which can ruin their holiday experience as they have to rest to get rid of it before they get active into more activities that they want to do whilst on holiday.

The enjoyment of anything they do is reduced when they are jet lagged. Insomnia which is not being able to sleep properly is a very common side effect of jet lag and that is caused by the fact you wake up during the night and then sleep during the day which is caused by circadian rhythms being disturbed.

Even NASA have estimated that you need 1 day of recovery for every time zone you cross to get back to normal so for example if it takes you 8 hours to get to Australia and you go from GMT to GMT+8 then you should have 8 days of recovery before you can actually be normal.

This is also an issue with business trips as businessman need to get their thoughts straight on their work and projects as they land and sometimes they can’t because of the loss of concentration from jet lag.

This is a big effect on business travel long haul as the employee’s aren’t as successful. The World Health Organization have also discovered that about 50% of people that travel to long haul destinations can catch more infections and illnesses to the lowering of human resistance which is what should fight any illnesses and infections and it cannot do it due to it fighting with the jet lag. The air in the aircraft is also not the same as on the ground and it gets you really dehydrated. British Airways have a jet lag calculator which you can use before your trip and it gives you tips on how to prevent jet lag and what to do to prevent it. Another risk of such a long flight like Australia can cause deep vein thrombosis which can be really fatal if not taken care of as it can pop and enter straight to your lungs. It has been proven by the World Health Organization Research that the risk of deep vein thrombosis happening doubles.

This is caused by the lack of movement and there are tips on a lot of website of exercises you can do on the plane to avoid the risk and also to buy some in flight socks. Climate and seasonality also have a big effect ton travelling to long haul destinations but that is just because of people not checking and not being informed about important information. Australia has different seasons than England does. Australia’s hottest months are during Christmas time so if someone wants the best out of their weather they would be best to go at that time. People also aren’t aware of the monsoon season in Thailand which is a season of heavy rain falls. Travelling during that period of time is sometimes even more than 50% cheaper however you have to be prepared for worse rainfalls and worse storms than in the UK which not a lot of people like when they go on holidays. In march 2011 there was flooding in Koh Tao which lead to the evacuation of all people and if this happened whilst you were on your holiday it would totally ruin your holiday experience. When it comes to the extreme climate conditions such as the tropical cyclones which happen in the South Pacific Ocean on the South of the equator.

There has been a Tropical storm in Mexico in 2013 leaving people with no way to get to the airport with one pair of shorts, sandals and a top waiting to be rescued. People are scared of visiting such destinations due to the risk of something like this happening. Moving onto the travel restrictions which are put in place by the government to inform tourists about any risks when visiting destinations or restrictions that stop them going to the country whatsoever. The FCO is a government company that has a website which gives all up to date information about any risks. There has recently been the Ebola virus ongoing which made the government put on restrictions on travelling to areas of West Africa. These restrictions are put in place at the moment until march 2015 as there still hasn’t been a cure fount and it’s a really deadly disease. Even though there has not been any risks of Ebola in the South Africa the times live have said in their news article that there has been a lot of people cancelling their holidays due to the fact that they are scared of getting the virus.

Travel restrictions are put in place to prevent people from getting the disease and spreading it further. Next I will talk about the social situations that affect the travel to long haul destinations. The poverty in a lot of long haul destination countries reaches the extreme levels where beggars are around every corner. Tourists have to be really careful with showing what they have and showing their wealth as the beggars end up making them feel guilty due to the fact that you maybe don’t want to help them and if you do it still makes you think that it isn’t enough. In Bandung which is a city in Indonesia there is an expected drop of 10% in tourism due to the increase of beggars on the streets. Tourists have to consider the culture and the level of poverty when they go to such an area and prepare themselves mentally to be able to enjoy this holiday. Also another example of this is the Ramadan city in Africa in which there are beggars not from even local areas harassing foreign tourists and making them give them all of their belongings. Recently these beggars were harassing two female tourists and when they didn’t succeed in getting anything out of them they tried to steal their stuff. This has been stated by Sumaiya Yousuf on the Rising Kashmir website.

Next I will talk about the health issues that affect the travel to some long haul destinations. Health issues include things like diseases and epidemics. There is a disease ongoing at the minute of Ebola in the areas of West Africa which led to travel restrictions for UK citizens. This disease has not only lead to loss of tourism for West Africa but also for South Africa and some Asian cities as people are scared to come and visit those places because of the disease being this close. There has been researches done that showed that if the epidemic spreads into countries such as Nigeria and Senegal, Africa could lose up to 32.6 billion by the end of 2015. The Research also shows a 20%-40% drop in demand to travelling to areas close to the affected regions. All of this is stated in a International Business Times news online. Entry and Exit requirements are another issue affecting travel to a long haul destination due to the cost of it as they are really high.

A single visit visa to China costs £30 per person, vaccinations and the certificates for them could cost from £15- £150 per person depending on the destination and departure taxes when you are leaving to go back to England vary from £20-£35 per person. Sometimes your departure tax is included in your flight however in some destinations such as Aruba, Dominican Republic, Jamaica and a few more you have to pay in local currency at the airport before you leave back home. Australia over the years since 2009 has increase their departure tax from $AUS7 to $AUS46 which as you can tell is a quick increase, we don’t know whether other countries will be doing departure taxes however it is really of putting when tourists go to destinations and a lot of their money goes on Visas, Departure tax and Vaccination certificates. 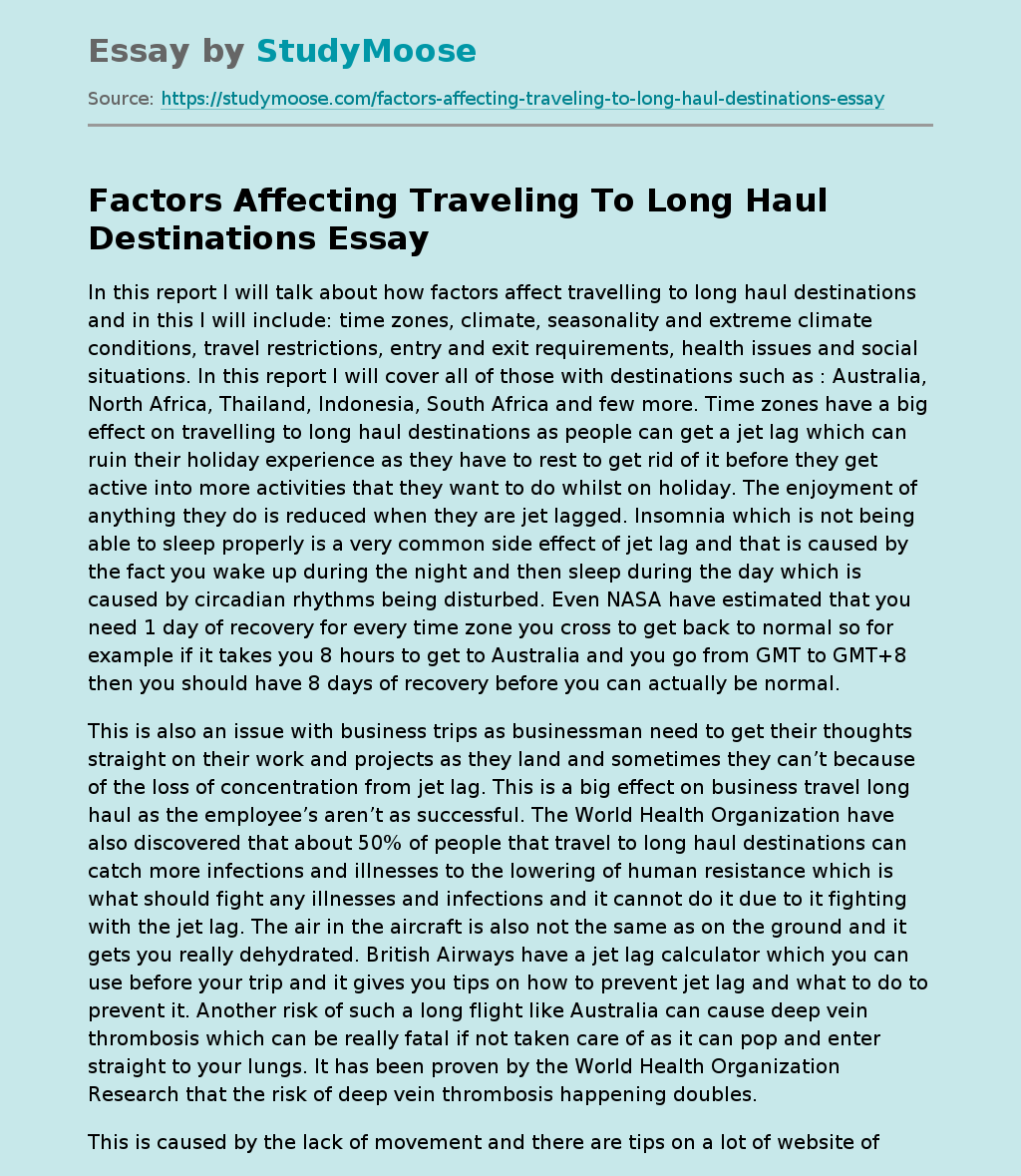