Fact and Fancy in Hard Times

Discuss the significance of Fact and Fancy in Hard Times with particular reference to Dickens’ presentation of the worlds of Sleary’s circus and Coketown. You should focus closely on techniques used and effects created and how both of these things shape our response, as readers, to the text.

Dickens uses a range of techniques to present the idea of the importance of and contrast between Fact and Fancy, such as the settings of the contrasting ‘worlds’ in the novel, imagery, and the very language he uses.

Don't use plagiarized sources. Get your custom essay on
“ Fact and Fancy in Hard Times ”
Get custom paper
NEW! smart matching with writer

Dickens lived in an era of growing industrial powers, where the ‘hands’ inside ravenous factories were many and depersonalised. With such an economy rapidly expanding, it could be considered the only logical that the value placed upon emotion, leisure and human compassion was hastily replaced by a focus on work ethic, greed and a strong class segregation.

The rapid changes of the time benefited some people long before others. Dickens is concerned with those still waiting for improvements and raises key moral and social questions in his writing, mainly focusing upon the need for schooling, the cruelty to and corruption of children, the problems arising from rapid industrialisation and the problems created by emphasis on social class and newly acquired wealth.

All of which can be seen in Hard Times. Dickens was, however criticised in his time. Gissing said that he “did not know the North of England” and that the character of Blackpool was a “mere model of meekness”. So this perceived representation of the industrial town and working class characters could be looked at sceptically by readers.

To present the differences between fact and fancy Dickens uses setting: an important technique at his disposal to instil in the readers mind a clear visualisation of the differentiating places using imagery not just simple description. In this case the contrast between harsh industry and the compassion of human nature. Dickens describes Coketown as “a town of machinery and tall chimneys”, instantly giving the reader the image of an industrial Northern town, similar to the representation of Victorian industry towns and cities in modern media adaptations of Victorian novels.

With its “black canal” and a river that “runs purple with ill smelling dye” the reader is instantly aware of the unpleasant setting Dickens’ creates. The bricks of the buildings here “would have been red if the smoke and ashes allowed it”: the smoke is conditioned to be connected with the very name of Coketown. Using the colour “black” further emphasises the darkness of the industrialised Coketown, and ‘purple’ a show of contrasting fact and fancy. That is, purple in the canal being artificial yet a factual occurrence and even a product of the philosophy of fact practiced in Coketown.

Ironically, Dickens uses creative metaphors in his representation of this world of facts, such as the comparison between the imagery in Coketown – the “painted face of a savage” where the reader could infer a contextual meaning – Dickens attempt to portray a supposedly civilised society truly being a savage and cruel society. The “interminable serpents of smoke” where one could consider a religious aspect – the serpent leading human kind into sin in the Garden of Eden, representing Dickens view of society of his time being led astray by the ever increasing industrialisation. The steam-engine working up and down like “an elephant in a state of melancholy madness” which supplies the reader with a depressive visualisation of the heavy, monotonous and slow industry and how it must feel to be seemingly trapped in this factory; the feeling of slowly going ‘mad’ with the repetition.

Comparing these uses of imagery to Slearys circus, the reader becomes aware of a great deal of care on Dickens part from the carefully placed contrasting images. The Pegasus, the winged horse that wouldn’t be accepted in the Fact philosophy of Coketown, appears twice in the chapter titled “Slearys’ Horsemanship”. The second occurrence of which is described as “theatrical”, covered with “golden stars” with a harness of “red silk”. These all directly contradict the metaphorical animals used in Coketowns description, and the monotonous smoke stained effect given to the reader.

The horse – a grand, proud “Quadruped” animal, fast, strong and agile, comparatively to the slow mad elephant of Coketown is metaphorically symbolic of not only the contrasting people of the two settings, but the places themselves and the community each possess. Contrastingly to the use of colours in the description of Coketown, the circus is filled with colours such as ‘golden’ and ‘red’, these colours being of royalty and leisure, ironically to the supposedly lesser setting of the novel. The very fabric of silk itself is a luxurious commodity. Slearys’ circus can be seen as a place where the reader can finally ‘breathe’, away from the smoke and industrialisation that compresses them while they read of Coketown. The reader becomes aware of the significance of the difference between the two by careful detail Dickens includes and the techniques he uses. The contrast between fact and fancy is also presented in theme of education, and its characters. The school is there to instil “nothing but facts” into the children.

The class room is bare, no colours or imagination, and the teachers equally stern and monotonous (almost the point of “madeness”). The use dialogue at the beginning of the novel gives Dickens the opportunity to ridicule one of the philosophers of fact in Coketown, Mr Gradgrind. The specific choice of language is worth noting as an important example of the mocking of the coldness of fact in both the world in Hard Times and contextually the Victorian era. The phrase “root out everything else”, more specifically “root”, Dickens may be presenting his dislike of the coldness towards imagination and the emotional response in the Victorian era itself by referring to the supposedly ‘non-factual’ parts of the self comparatively to weeds amongst the theoretical crop of what the Victorians classed as the intellect.

The description of the other character presented in the beginning chapters, the schoolmaster Mr M’Chokemchild, is also an important example of character differences: “(…) some one hundred and forty (…) turned at the same time, (…) same factory, (…) same principles, like so many pianoforte legs”. He describes them as being made all the same, namely with the same principles, mocking the Victorian rigid beliefs. Once more, the language Dickens choses- this time he depersonalises them to emotionless characters by comparing them to mere “pianoforte legs” – to be at the foundation of and hold up the body of the fraudulent founders of the philosophy of Fact.

Dickens also subtly shows the uselessness of the philosophy by the way the children, whom are supposedly “educated”, appear. For example, Louisa, who is educated by Mr Grandgrind: “(…) a fire with nothing to burn, a starved imagination keeping life in itself somehow(…)” A strongly repressed passionate young girl who through education has become depressed and cold. And Blitzer, who eagerly adhered to Grandgrinds’ teachings as a child growing up to become a uncompassionate egotist: he becomes the light porter at Bounderby’s bank, spies on Tom and the other clerks, and only follows the economic principle of complete self-interest.

Dickens tries to show how education so greatly shapes a person’s character by using the space of time that passes in the novel to show the growth of the children. More importantly to show how the forced factual education has a damaging effect on individuals – innocent individuals. This ‘killing’ of compassion in the children could be considered to be Dickens way of presenting the damage caused by ‘fact’ in society. The reader could infer that the presentation of the battle between fact and fancy, or even the mere existence of it, is significant because Dickens is presenting a contextual view into the society he is living in. Dickens was rebelling against the way imagination and compassion was viewed and the way knowledge was defined, by reflecting to readers this world and the battle between Fact and Fancy. Bibliography

Fact and Fancy in Hard Times. (2016, Apr 14). Retrieved from https://studymoose.com/fact-and-fancy-in-hard-times-essay 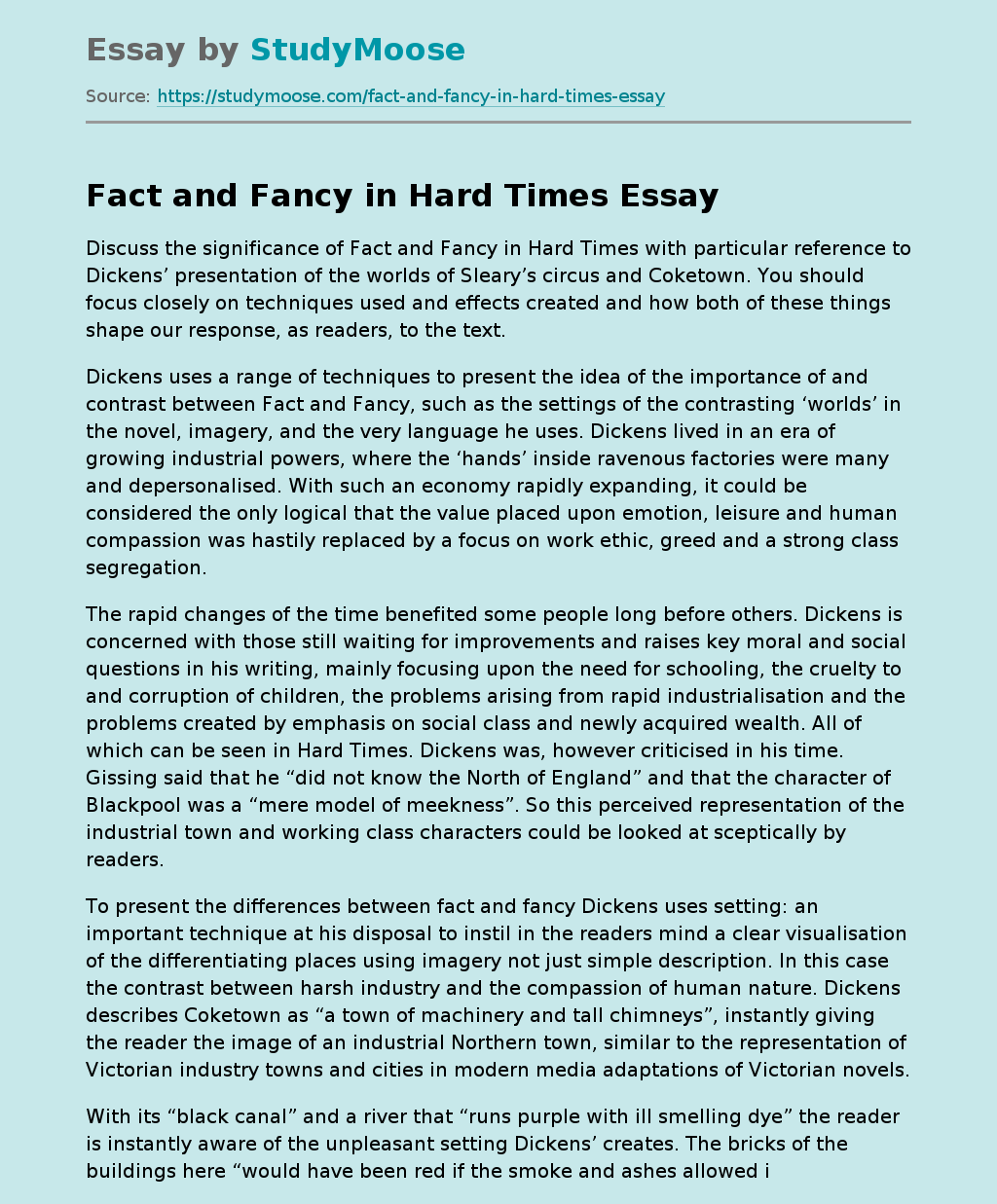