However, face recognition is considered to be the more direct, friendly and convenient method for identification as compared to fingerprint identification.

Don't use plagiarized sources. Get your custom essay on
“ Facial Recognition System ”
Get custom paper
NEW! smart matching with writer

This has made face recognition system as the second most widely used biometric technology after fingerprinting with a projected revenue of $429 million in 2007, according to Raicu & Strandburg (2005). This growth in the use of this technology is attributed to the sharp rise in the number of digital cameras and camcorders and inconsequence surveillance cameras.

The purpose of this paper is to analyze this technology, explain its basic principle, look into the limitations of the technology and the research work being done in this field.

It yes, then it locates the position of the faces and segments each face from the background Features extraction and face recognition – This step checks the various features that distinguish different individuals.

It figures whether the people in the image are the given person or if he / she are in the database. Needless to say, the face recognition system depends upon the input of the system. The importance of the input and picture background is explained by Zhang (2000) by giving the following example. The picture taken during log in on a system and passing custom are controlled.

That is to say the background is uniform for the images or image sequences. The pose, orientation etc is also known and well controlled. This makes the process of face recognition is accurate and faster. However, in case of an input environment which is universal for all situations, there might be number of faces and also a complex background. The location of the face and its size is not known, the illumination on the different faces in a picture is different and their expressions might be different too.

In such cases, the face detection and location is difficult. Face recognition can be made difficult due to different expressions, orientations and age, making the process of feature extraction and face recognition all the more difficult (Zhang, 2000) One important parameter in the evaluation of a face-processing system is the performance evaluation. The basic measurement parameters are the same as that for pattern recognition system FA i. e. false acceptance or false positive and FR i. e. false rejection or false negative.

As in case of a pattern recognition system, an ideal face-recognition system should have very low scores of FA and FR, but a practical system usually makes trade-offs between these two factors. History of Face Processing Systems Development According to Zhao & Chellappa (2006), the earliest work on face recognition can be traced to the early 1950s in psychology and 1960s in engineering literature. However, the research on automatic machine recognition of faces started in 1970s after the work of Kanade and Kelly.

For over 30 years extensive research has been conducted on various aspects of face recognition by humans and machines. During early and mid 1970s typical pattern-classification techniques using measured attribute of features for instance the distances between important points in faces or profiles were used. In 1980s, the work in this field remained largely dormant. The interest in this field was renewed in 1990s due to an increase in commercial opportunities, availability of real-time hardware and emergence of surveillance related applications.

During this time the research was focused on how to make the face-recognition systems fully automatic by tackling various underlying problems like localization of a face in a given image or a video clip and extraction of features such as eyes, mouth etc (Zhao & Chellappa, 2006) Applications of Face processing The applications of face processing vary, leading to different features extraction and face recognition. For instance, one application is the face verification, which means that the person is who he claims to be. This is used in places like banks for identity confirmation.

Another application is to check if the person exists in the database and if yes than which one. This is known as face recognition and used in surveillance systems in offices. A variation of this is when we wish to have a list of candidates with a specific set of specified features. This is used in the police department (Zhang, 2000) The table below gives some applications of face processing including detection and tracking, recognition of identity and expressions, and also personalized realistic rendering (Zhao & Chellappa, 2006). 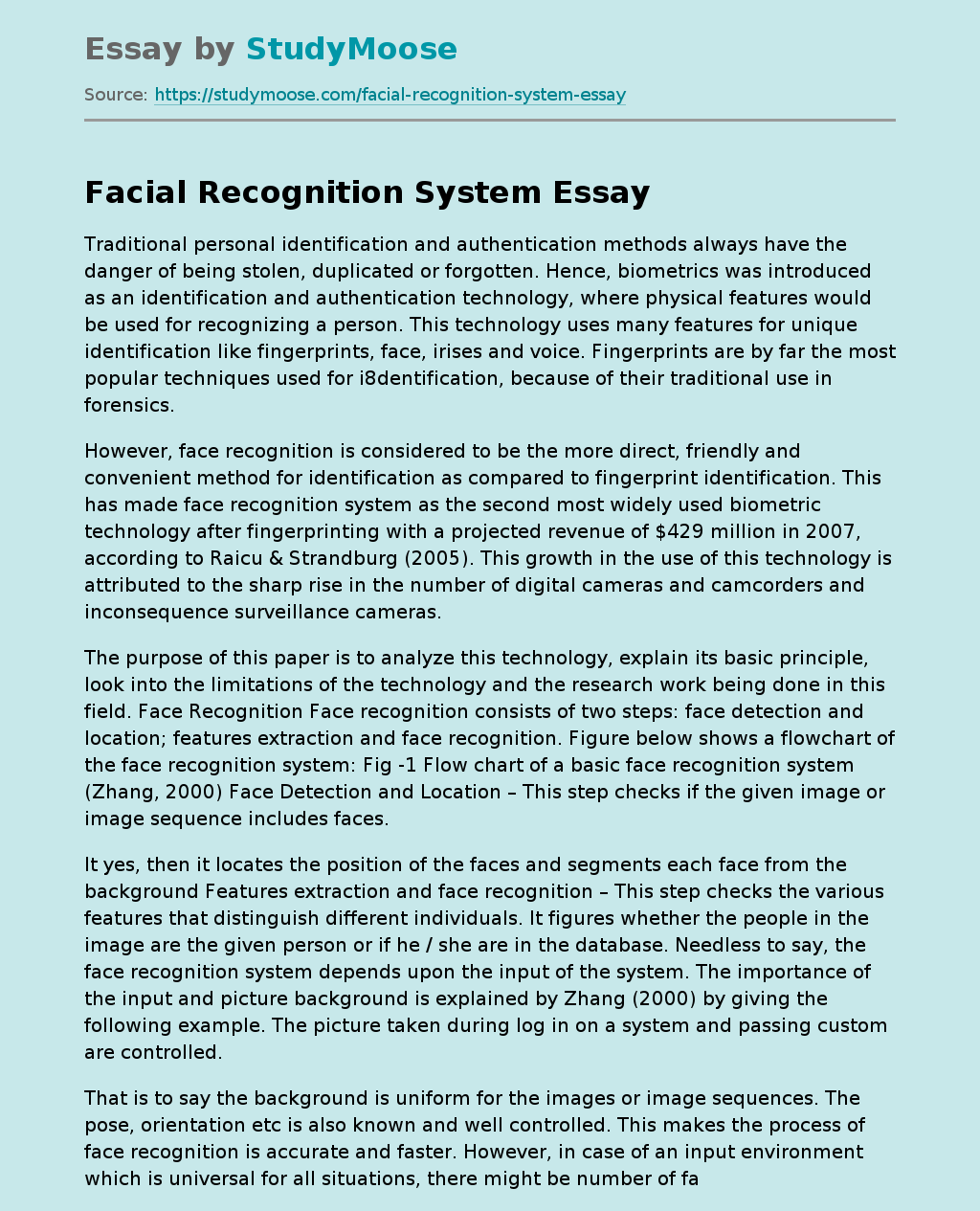