Facebook (originally “The facebook”) is a social networking website launched in February 2004 by Mark Zuckerberg, then 23, while studying psychology at Harvard University. Membership was initially limited to students of Harvard College, but soon the social site was subsequently extended to other Boston universities, the Ivy League and eventually all US universities (Yadav, 2006). It became Facebook. com in August 2005 after the site’s address was obtained for a relatively meager $200,000. By the end of the following year it was also open to high schools.

Don't use plagiarized sources. Get your custom essay on
“ Facebook vs Twitter Case Study Analysis ”
Get custom paper
NEW! smart matching with writer

As of September 2006, Facebook was extended beyond educational associations to anybody with a registered email address. They have over 175 million active users worldwide currently and are growing every day. Facebook’s mission statement seems simple: “Facebook’s mission is to give people the power to share and make the world more open and connected (Reagan, 2009). Twitter still no business model but it has a new mission statement: “To instantly connect people everywhere to what’s most important to them.

Facebook has tried to purchase Twitter with no success. It is hard to say who will come out on top or who will be the ultimate winner of the social war. There are some key differences between the sites (Lacy, 2009). It’s far easier to find people on Facebook and most of the time you can tell if it’s actually them. Facebook and Twitter are both free sites and are both popular.

Facebook does not have a character limit. They both can post pictures and videos, but Facebook has more capacity for sharing videos and photos without forcing you to link out to another window (Lacy, 2009). Facebook has a better privacy blocking system, if you can find it with the ever changing improvements. A lot of users are not aware of this option. Facebook allows businesses to advertise and reach more people faster. Facebook makes there revenue off the ads on their site, witch keeps it free for their users. Facebook has games for their users to play as well.

These games also generate some of their revenue. Twitter has no games and the only source of revenue is its investors. Facebook is threatened with losing users to a less familiar, social networking website. The major problem that exists is the fact that Twitter has a controlled level of social networking. Facebook does not allow one way interaction options meaning that if I want to follow someone’s posts then they themselves would have to accept my friend request, and Facebook also does not allow someone to track real time information is always adding improvements that the client base does not like.

With this happening it may mean that many Facebook members may leave and start using twitter because of some of the restrictions that are placed on the members of Facebook. The first alternative solution is for Facebook to purchase stellar star technology and offer the capability to track real-time information. This solution will help to eliminate Twitter’s current advantage of having the capability to track real-time information. Another alternative solution is to develop a way for one-way relationships to be possible on Facebook, while maintaining its’ security.

Many users want to broadcast their status information, but not actually follow all of their status viewers and get somewhat irritated with the flow of game postings that clog up their pages. I know I do to the point that I log off and sometimes go and check out Twitter. In conclusion, there will never be a happy medium here. Technology is constantly evolving and there will probably be another social network that will be created and pose threats to both of these networks.

In my opinion, Facebook is more personal, whereas Twitter is more Hollywood. Facebook deals with contacting old friends and family members and Twitter is about following an entertainer. Myspace is simply out of space as there aren’t really too many users out there anymore. LinkedIn is a way to network via business and doesn’t contain the content that any of these sites do, as it wouldn’t be professional. Facebook will definitely be around for a long time, as will Twitter. Most can’t have one without the other, I know I can’t. 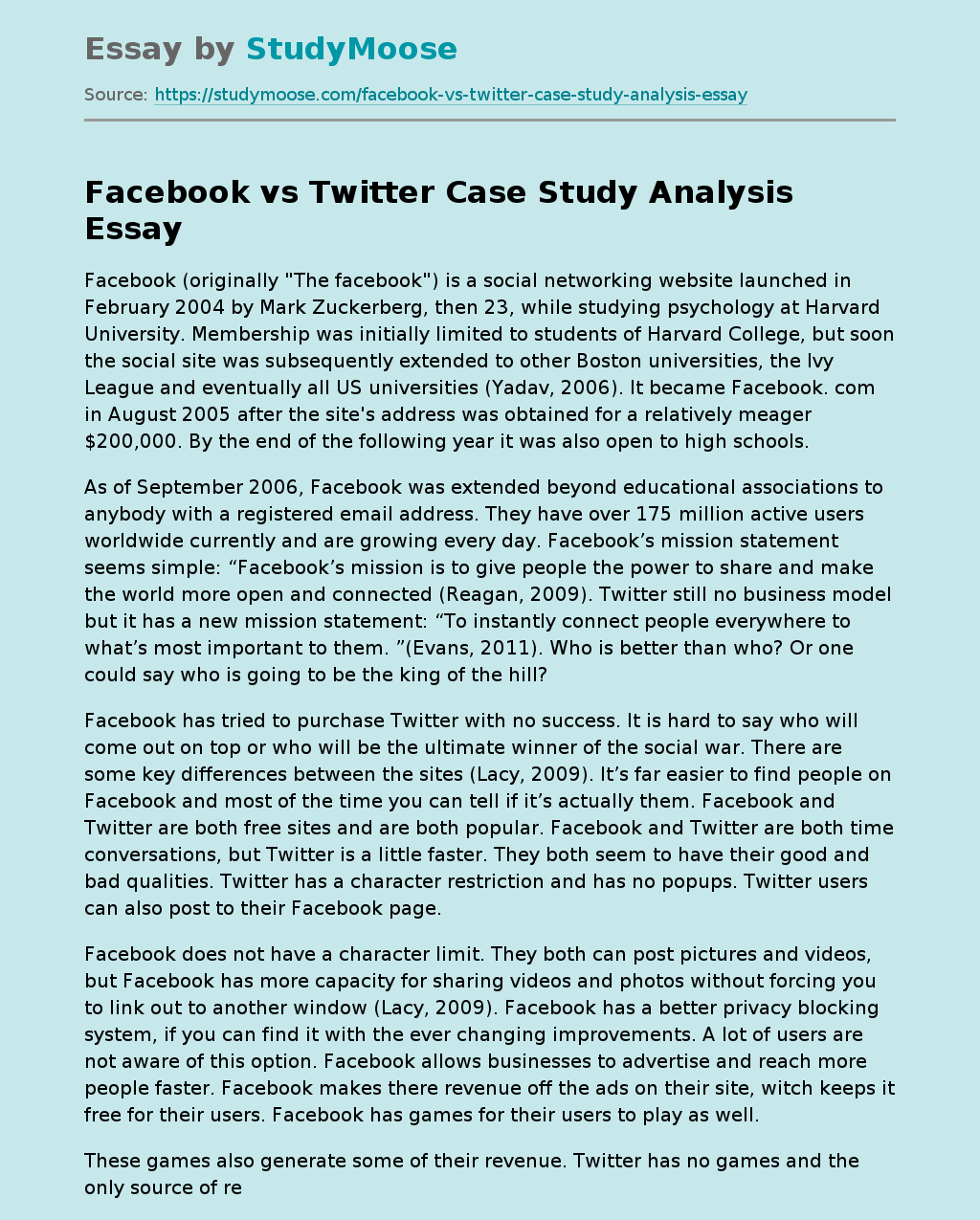