Fabrication and Analysis of Reynold`S Experiment

For shapes such as a square or rectangular duct (where the height and width are comparable) the characteristic dimension is called the ‘hydraulic diameter, DH, defined as 4 times the cross-sectional area, divided by the wetted perimeter. (For a circular pipe this is exactly the diameter.):

Flow in a Wide Duct

Don't use plagiarized sources. Get your custom essay on
“ Fabrication and Analysis of Reynold`S Experiment ”
Get custom paper
NEW! smart matching with writer

Flow in an Open Channel

For flow of liquid with a free surface, the hydraulic radius must be determined. This is the crosssectional area of the channel divided by the wetted perimeter. For a semi-circular channel, it is half the radius. The characteristic dimension is then 4 times the hydraulic radius (chosen because it gives the same value of Re for the onset of turbulence as in pipe flow.)

In boundary layer flow over a flat plate, experiments can confirm that, after a certain length of flow, a laminar boundary layer will become unstable and become turbulent.

This instability occurs across different scales and with different fluids, usually when , where x is the distance from the leading edge of the flat plate, and the flow velocity is the ‘free stream’ velocity of the fluid outside the boundary layer. For flow in a pipe of diameter D, experimental observations show that for ‘fully developed’ flow, laminar flow occurs when ReD < 2300 and turbulent flow occurs when ReD > 4000.

In the interval between 2300 and 4000, laminar and turbulent flows are possible (‘transition’ flows), depending on other factors, such as pipe roughness and flow uniformity).

This result is generalized to non-circular channels using the hydraulic diameter, allowing a transition Reynolds number to be calculated for other shapes of channel. These transitions Reynolds numbers are also called critical Reynolds numbers, and were studied by Osborne Reynolds around 1895.

Osborne was born in Belfast, Ireland on 23rd August where his father was Principal of the Collegiate School. But, he moved with his parents soon afterward to Dedham, Essex. His father worked as a school headmaster and clergyman, but was also a very able mathematician with a keen interest in mechanics. The father took out a number of patents for improvements to agricultural equipment. He began his schooling at Dedham when his father was headmaster of the school in that Essex town. After that he received private tutoring to complete his secondary education. He did not go straight to university after his secondary education, however, but rather he took an apprenticeship with the engineering firm of Edward Hayes in 1861. Reynolds, after gaining experience in the engineering firm, studied mathematics at Cambridge, graduating in 1867. As an undergraduate Reynolds had attended some of the same classes as Rayleigh who was one year ahead of him.

As his father had before him, Reynolds was elected to a scholarship at Queens’ College. He again took up a post with an engineering firm, this time the civil engineers John Lawson of London, spending a year as a practicing civil engineer. In 1868 Reynolds became the first professor of engineering in Manchester (and the second in England).Reynolds held this post until he retired in 1905. His early work was on magnetism and electricity but he soon concentrated on hydraulics and hydrodynamics. He also worked on electromagnetic properties of the sun and of comets, and considered tidal motions in rivers. After 1873 Reynolds concentrated mainly on fluid dynamics and it was in this area that his contributions were of world leading importance. He studied the change in a flow along a pipe when it goes from laminar flow to turbulent flow. In 1886 he formulated a theory of lubrication.

Three years later he produced an important theoretical model for turbulent flow and it has become the standard mathematical framework used in the study of turbulence. His studies of condensation and heat transfer between solids and fluids brought radical revision in boiler and condenser, while his work on turbine pumps permitted their rapid development. A paper published in 1883 entitled “An experimental investigation of the circumstances which determine whether the motion of water in parallel channels shall be direct or sinuous and of the law of resistance in parallel channels” introduced what is now known as the ‘Reynolds number’, a variable commonly used in modeling fluid flow. Reynolds became a Fellow of the Royal Society in 1877 and, 11 years later, won their Royal Medal. In 1884 he was awarded an honorary degree by the University of Glasgow. By the beginning of the 1900s Reynolds health began to fail and he retired in 1905.

Not only did he deteriorate physically but also mentally, which was sad to see in so brilliant a man who was hardly 60 years old. Despite his intense interest in education, he was not a great lecturer. His lectures were difficult to follow, and he frequently wandered among topics with little or no connection. Lamb, who knew Reynolds well both as a man and as a fellow worker in fluid dynamics, wrote: – “The character of Reynolds was like his writings, strongly individual. He was conscious of the value of his work, but was content to leave it to the mature judgment of the scientific world. For advertisement he had no taste, and undue pretension on the part of others only elicited a tolerant smile. To his pupils he was most generous in the opportunities for valuable work which he put in their way, and in the share of cooperation. “ He died on 21st February1912.

Reynolds most famously studied the conditions in which the flow of fluid in pipes transitioned from laminar flow to turbulent flow. From these experiments came the dimensionless Reynolds number for dynamic similarity — the ratio of inertial forces to viscous forces. Reynolds also proposed what is now known as Reynolds-averaging of turbulent flows, where quantities such as velocity are expressed as the sum of mean and fluctuating components. Such averaging allows for ‘bulk’ description of turbulent flow, for example using the Reynolds-averaged Navier-Stokes equations. His publications in fluid dynamics began in the early 1870s.

His final theoretical model published in the mid 1890s is still the standard mathematical framework used today. Examples of titles from his more groundbreaking reports: • • Improvements in Apparatus for Obtaining Motive Power from Fluids and also for Raising or Forcing Fluids. (1875) An experimental investigation of the circumstances which determine whether the motion of water in parallel channels shall be direct or sinuous and of the law of resistance in parallel channels. (1883) On the dynamical theory of incompressible viscous fluids and the determination of the criterion. (1895)

• Reynolds’ contributions to fluid mechanics were not lost on ship designers (“naval architects”). The ability to make a small scale model of a ship, and extract useful predictive data with respect to a full size ship, depends directly on the experimentalist applying Reynolds’ turbulence principles to friction drag computations, along with a proper application of William Froude’s theories of gravity wave energy and propagation. Reynolds himself had a number of papers concerning ship design published in Transactions of the Institution of Naval Architects.

Reynolds published about seventy science and engineering research reports. When towards the end of his career these were republished as a collection they filled three volumes. Areas covered besides fluid dynamics included thermodynamics, kinetic theory of gases, condensation of steam, screw-propeller-type ship propulsion, turbine-type ship propulsion, hydraulic brakes, hydrodynamic lubrication, and laboratory apparatus for better measurement of Joule’s mechanical equivalent of heat.

The diagonal elements , , and of the stress matrix indicate the normal stress and the off-diagonal elements are the tangential or the shear stress. We also can prove that the stress tensor is symmetric. i.e.; . We can deduce Cauchy’s equation from an integral statement of Newton’s law for a material volume V. The surface force on an area element dA is (dA. . Newton’s law for a material volume V requires that the rate of change of its momentum equals the sum of body forces throughout the volume, plus the surface force at the boundary.

Fabrication and Analysis of Reynold`S Experiment. (2016, Oct 07). Retrieved from https://studymoose.com/fabrication-and-analysis-of-reynolds-experiment-essay 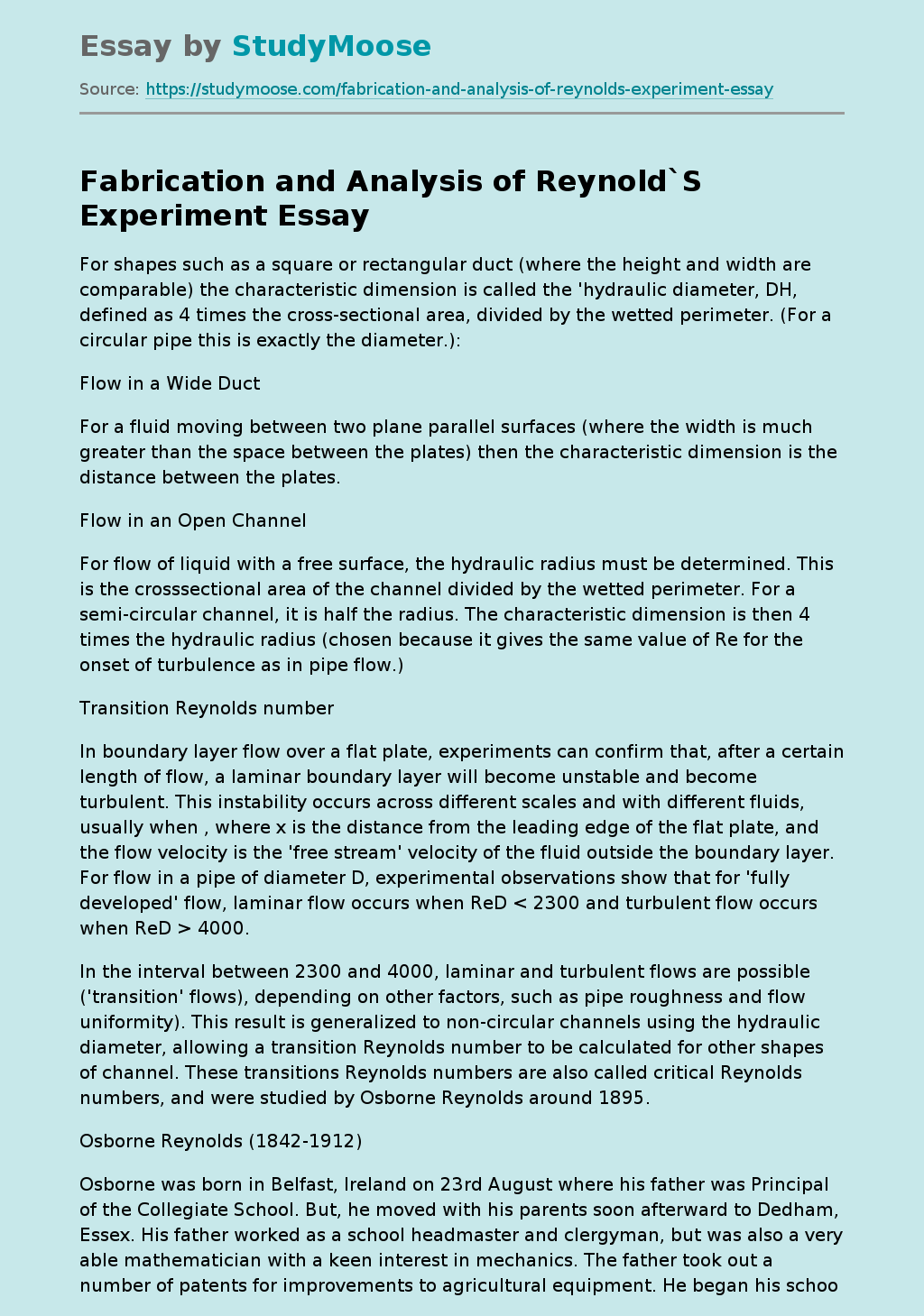