Ezekiel’s Prophecy of the Temple

The prophesy of the temple ought to be interpreted literally and not figuratively. This is because it was given at a time when Ezekiel was still in captivity. Since Ezekiel was in captivity while stating this prophecy, this time was literal and not figurative. Similarly, Ezekiel’s apocalyptic prophecies tend to have close similarities with prophecies found in the revelations, which is another suggestion that the prophecy is more literal than figurative. In Ezekiel 40-42, Ezekiel describes a temple that is to be constructed and would be used for worshiping for not only the Israelites but also the entire world.

Don't use plagiarized sources. Get your custom essay on
“ Ezekiel’s Prophecy of the Temple ”
Get custom paper
NEW! smart matching with writer

Since the temple being described has never been constructed, it becomes evident that the prophecy is yet to be fulfilled.

In early chapters of Ezekiel 40, the prophet talks of being taken to Jerusalem in a vision. It is in this vision that he is shown a new temple. The reason why the prophecy is more literal than figurative is because most prophecies are liberal.

The other reason why Ezekiel’s prophecy was more literal than figurative is due to the details covered in the chapters. Measurements of the temple walls as well as courtyards and gateways make the vision appear more literal.

Although this vision is yet to be fulfilled, the book of revelations states that there will be no temple constructed in the New Jerusalem since it is God and the lamb that will represent the temple. Due to this revelation, it is evident that the prophecy is literal since no temple will be constructed.

In Ezekiel 44-46, Ezekiel talks of sacrifices that will be offered in the new temple. This prophecy is also literal since it is difficult to believe that sacrifices will come into existence again in the future. In my opinion, this prophecy is literal since instead of sacrifices, the vision depicts memorial sacrifices similar to those that occurred during the first coming of Jesus Christ such as the last supper. During the last supper, Jesus asked his disciples to use bread and wine in his commemoration. This implied that God prefers this form of commemoration rather than the regular sacrifice.

In my opinion, the sacrifice visualized in the temple by Ezekiel is more literal than symbolic since it represents the presence of Jesus rather than the literal animal sacrifice. Through this, it is evident that the temple visualized by Ezekiel will be fulfilled by Jesus’ second coming. In Ezekiel 45-46, he talks of a prince who will carry out his roles with justice and righteousness. For instance, when it comes to tax, this prince will ensure that he takes only what one can afford, this is in relation to one’s financial ability. Due to this revelation, it becomes evident that the prophecy ought to be understood as literal and not figurative. 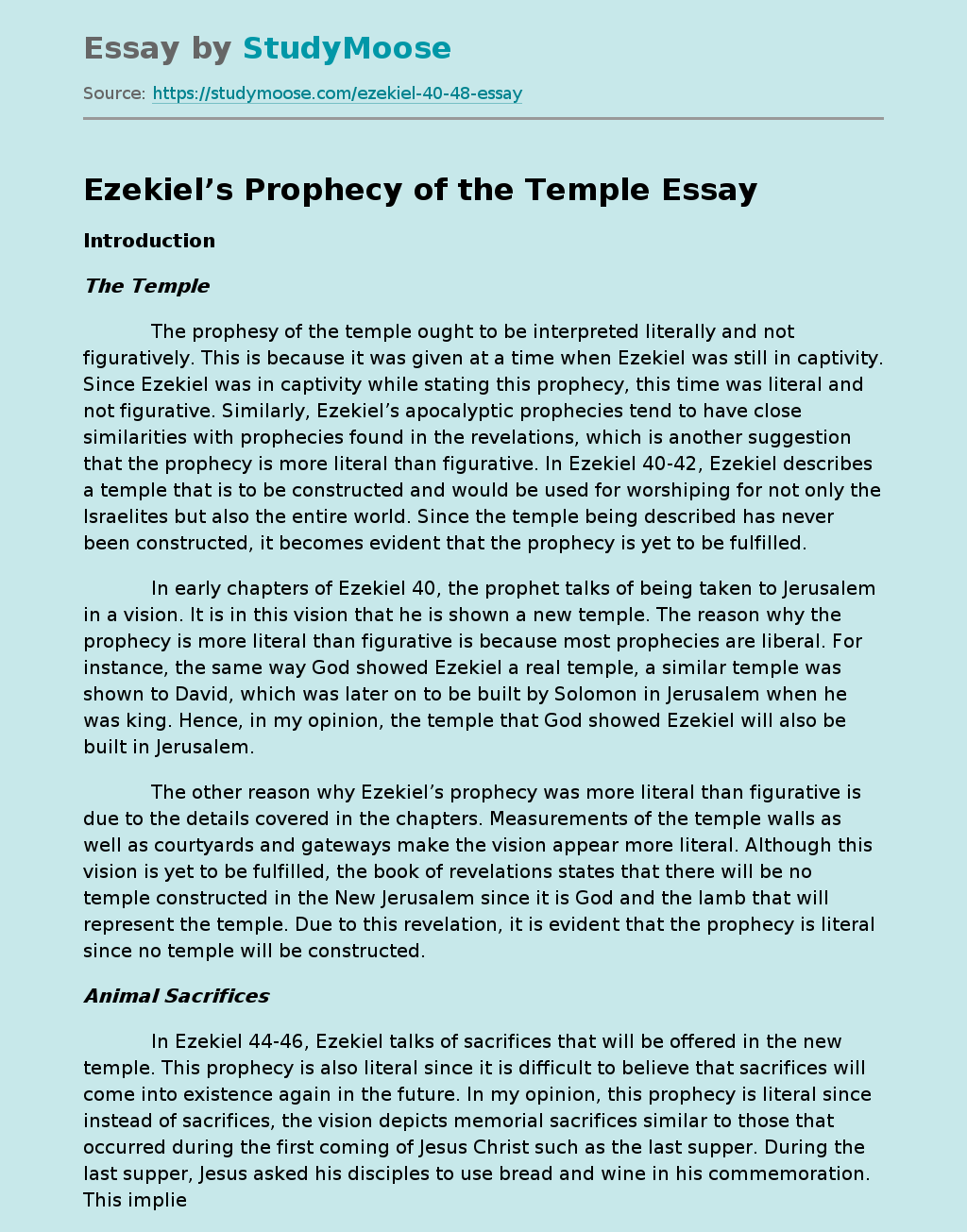