External Causes for Enron to Collapse

Deregulation of the U.S. energy industry made possible Enron’s emergence as a major corporation, but also ultimately may have contributed to its collapse. The company successfully seized the opportunity created by deregulation to create a new business as a market maker in natural gas and other commodities. Enron successfully influenced policymakers to exempt the company from various regulatory rules, for example in the field of energy derivatives. This allowed Enron to enter various trading markets with virtually no government oversight.

Don't use plagiarized sources. Get your custom essay on
“ External Causes for Enron to Collapse ”
Get custom paper
NEW! smart matching with writer

Arguably, regulation might have prevented Enron from taking some of the risks and making some of the mistakes which it did. While deregulation may initially have helped Enron, by allowing it to create and enter new markets, it later hurt the company by removing the very restraints that might have kept it from becoming fatally overextended.

Arguably, government regulatory agencies failed to exercise sufficient oversight or to enforce the rules that were on the books.

Hindsight makes it fairly clear that the accounting standards promulgated by the Financial Accounting Standards Board (FASB) were too weak and too ambiguous with respect to the complex trading transactions and financial structures that Enron established and operated. Two areas stand out as ones of particular concern. First, the rules apparently permitted the widespread use of market-to-market (MTM) accounting in areas for which it was not originally intended.

Second, the 3 percent rule for outside ownership of SPEs was arguably too low to maintain genuine independence. An underlying issue was that corporate practice (e.g., sophisticated online trading of complex financial derivatives) had outpaced the work of the rules makers, leading to the application of rules in situations for which they were not originally designed.

A key external issue was conflict of interest on the part of accounting and law firms working for Enron. Arthur Andersen, the company’s accounting firm, arguably had a conflict of interest in that Arthur Andersen provided both external audit services and internal consulting for Enron. If Arthur Andersen were to challenge the propriety of Enron’s financial statements in its annual audit, it ran the risk of jeopardizing its lucrative consulting and “inside” accounting work for its client. Moreover, relations between the two firms were unusually close, possibly undermining Arthur Andersen’s objectivity and independence. Similarly, Vinson & Elkins, Enron’s outside law firm, was seemingly under pressure not to question the legality of the Special Purpose Entities (SPEs) too closely, since Enron was a major client of the firm.

Enron made extensive legal use of various techniques of political influence, including engaging the services of lobbyists, making extensive contributions to political campaigns, particularly using soft money, and hiring former government officials. One of the external causes, then, may have been campaign finance and other rules that permitted such legal exercise of corporate influence in policymaking.

A case can be made that external stakeholders–especially large institutional investors such as pension and mutual funds–failed to exercise due diligence. These institutional investors were happy to make handsome returns on their extensive investments in Enron in the late 1990s, but failed to become actively involved in corporate governance at the company until it was too late.

External Causes for Enron to Collapse. (2016, Jul 15). Retrieved from http://studymoose.com/external-causes-for-enron-to-collapse-essay 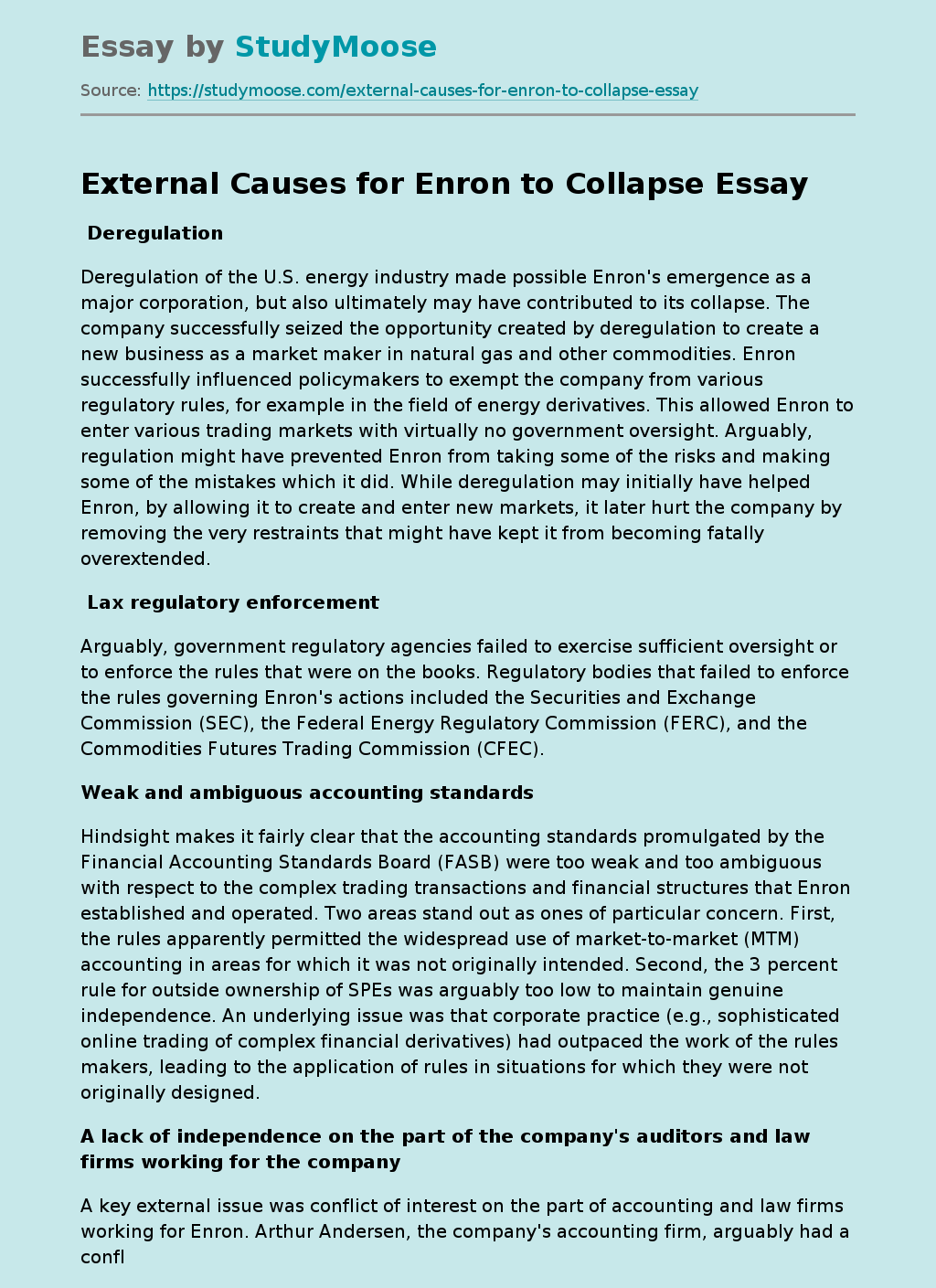