To what extent was Stalin's foreign policy after 1945 aimed at the expansion of the communist system?

Subsequent to the Second World War two major influential states emerged, the United States and the Soviet Union, however due to their ideological differences conflict seemed inventible. The Traditionalist school of thought argues that Stalin’s Soviet Union foreign policy after 1945 was predominantly aimed at the expansion of the communist system. However this argument is contradicted by revisionist theories who believe that Stalin’s foreign policy after 1945 was predominantly defensive. When discussing particular events in history it is often difficult to obtain a completely unbiased opinion and therefore numerous viewpoints need to be analyzed.

Don't use plagiarized sources. Get your custom essay on
“ To what extent was Stalin’s foreign policy after 1945 aimed at the expansion of the communist system? ”
Get custom paper
NEW! smart matching with writer

Stalin’s foreign policy after the Second World War, is viewed by traditionalist theorists as motivated predominantly by expansionist intentions. The Soviet Union is described by as being aggressive and untrustworthy, particularly as it failed to uphold policies and negotiations which were implemented by the two rivals and their allies. Furthermore the expansionist policies which took place particularly in areas not geographically significant to the Soviet Union openly demonstrated that communist expansionism was being encouraged and implemented, “the Soviets always seek ways of undermining the authority of non-communist powers so as to expand the communist world” (M.

McCauley, 1983:9). In contrast the United States foreign policy is generally described as being initially passive, only later changing as a result of expansionist policies undertaken by the Soviet Union. Arguing that although Eastern Europe itself was not of particular strategic importance to the United States, the fear that the expansion would continue and eventually affect Western Europe was of great concern.

Hence the use of communist coercion and support of communist uprisings in both neighboring states and the rest of the world gave rise to the United States and their allies’ suspicions of Stalin’s foreign policy.

Events occurring in the Persian Gulf and the Mediterranean regions are seen by traditionalist theorists as expansionist policies undertaken by Stalin. The occupation of Iran began initially on justified terms in 1941 during the Second World War, where Britain and the Soviet Union used it as a means to transfer military supplies to the Soviet front. However as the war began to come to conclusion problems began to emerge, particularly in respect to Stalin’s communist expansionist policies. Iran complained that the USSR had completely isolated its occupation zone from outside contact. However the Soviet government defended this by explaining that it was only protecting itself against possible Anglo-American expansion in Iran.

By 1946 the Soviets refused to withdraw their troops from the State and although Stalin’s intentions were not entirely clear various traditionalist sources argue that the Soviet Union had strong intentions of converting Iran into a communist Soviet Satellite. Furthermore Stalin’s refusal to accept the Iranian government’s willingness to offer oil concessions in return for their withdrawal from Soviet-occupied Azerbaijan and Kurdish regions further proved that “Moscow’s goal was nothing less than detaching the northern area of Azerbaijan and than by various means pressuring Iran into a servile status”.(J. Spanier, 1990:30). By mid-November, Azerbaijan became a region of much tension and independent movements supported by the Soviet Union began to emerge. This situation which occurred in Iran is viewed by many traditionalists as clear evidence of Stalin’s willingness to expand the communist ideology and hence his influence in the region.

Another apprehension for the anti communist powers was the situation escalating in Greece. Although a general election was held in 1946 restoring the King to the throne, the increasing strength of the communist forces in northern Greece became a great concern to not only the Greek government but also to Britain and later the United States. The Greek government claimed that the communist guerrilla fighters known as ELAS were receiving assistance from three countries all closely linked to the Soviet Union, Albania, Bulgaria and Yugoslavia. Some traditionalist’s argue that this was a direct result of Stalin’s foreign policy aimed at the expansion of communism. However it was later proven that ELAS was only receiving limited support from Stalin, who seemed to have retained some respect for the spheres of interest agreed upon at the Yalta Conference in 1945. But the United States and its allies viewed this as organized Soviet pressure.

Similarly the situation in Turkey, it is argued further proved Stalin’s expansionist policies. After the Second World War Stalin attempted to include Turkey in its sphere of influence by making several demands for control of several Turkish districts lying on the Turkish – Soviet border. While this may be seen to some extent in defensive terms, the Soviet Unions demand for Turkey’s severance of ties with Britain, its insistence for Turkey to lease its naval and land bases to the Soviet Union and its failure to accept a compromise proposal contradicts this, particularly as it would have given Stalin extensive control of the Black Sea and the Mediterranean. During this period many traditionalists feared that “if Greece should fall… it would only be a matter of time until Turkey and Iran fell also” (J. Spanier, 1990:35) many believed that Stalin’s foreign policy was no longer dominated by fears of security but instead by communist domination. Due to these particular events the United States implemented particular policies in order to prevent both Greece and Turkey falling to communist forces. The policy known as the Truman Doctrine implemented in 1947 by Harry Truman offered the two Nation’s economic support after Britain was no longer able to sustain its support. The implementation of the Truman doctrine is substantial evidence that the western powers and hence traditionalist writers saw communism as a realistic threat, and further viewed Stalin as a supporting player in the events occurring.

In contrast to the traditionalist view, revisionist theorists argue that Stalin’s Soviet foreign policy after 1945 was predominantly motivated by security interests. They argue that Stalin was not interested in global communist expansion but rather wanted to create a protective barrier around the Soviet Union. Due to this revisionist writers have tended to down play the Soviet Unions movements in the Mediterranean regions and particularly Greece arguing that Stalin lacked enthusiasm for other communist leaders not directly related to the Soviet Unions sphere of influence. The communist ideology lies on the belief that through the uprising of the proletariat / working class it is inevitable that the world would eventually become communist. Therefore revisionists argue there was no need for Stalin to implement expansionist policies in either the Mediterranean or elsewhere not directly related to the Soviet Unions direct security interests.

In addition it can further be argued that after the Second World War the Soviet Union was in no position to cause tensions with either the United States or Britain. It had only narrowly escaped defeat in World War Two and its “enormous human and material loses meant that by 1945 it was near economic ruin” (M. McCauley, The Origins of the Cold War p13) When compared to the United States which had un-doubtfully thrived during the war and obtained a monopoly on atomic weapons, the Soviet Union was in no position to challenge their authority. Under Stalin revisionists argue the Soviet Union had primarily focused on rebuilding its devastated economy and paid little attention to world revolutionary goals. Due to these reasons the only expansionist policies which were undertaken after 1945 were predominantly motivated by security interests and not communist ideology.

After the Second World War Stalin undertook specific foreign policy goals to assure that the Soviet Union would not be again attacked as it had been numerous times in its history. Poland it was argued was of major importance to Stalin, it was seen as a buffer zone between the Soviet Union and Germany. Furthermore it was made evident that if the West would attack, it would un-doubtfully invade through Poland. After Germanys surrender and the Potsdam Conference in 1945 a Polish – Soviet frontier was established and the Soviet Union acquired considerable amounts of Polish territory. As further developments occurred and communist strengths continued to grow in the Polish government the United States and its allies began to oppose Stalin’s intervention. However when a new communist government supported by Stalin was implemented it was quickly accepted by the western powers even though the United States and its allies accused Stalin of breeching the Yalta agreement and accused the elections of being manipulated to suit the Soviet Unions needs. Revisionists argue that this clearly demonstrates that the expansionism occurring in Poland was predominantly defensive as Poland was of strategic geographic importance to the Soviet Union.

To what extent was Stalin's foreign policy after 1945 aimed at the expansion of the communist system?. (2020, Jun 02). Retrieved from https://studymoose.com/extent-stalins-foreign-policy-1945-aimed-expansion-communist-system-new-essay 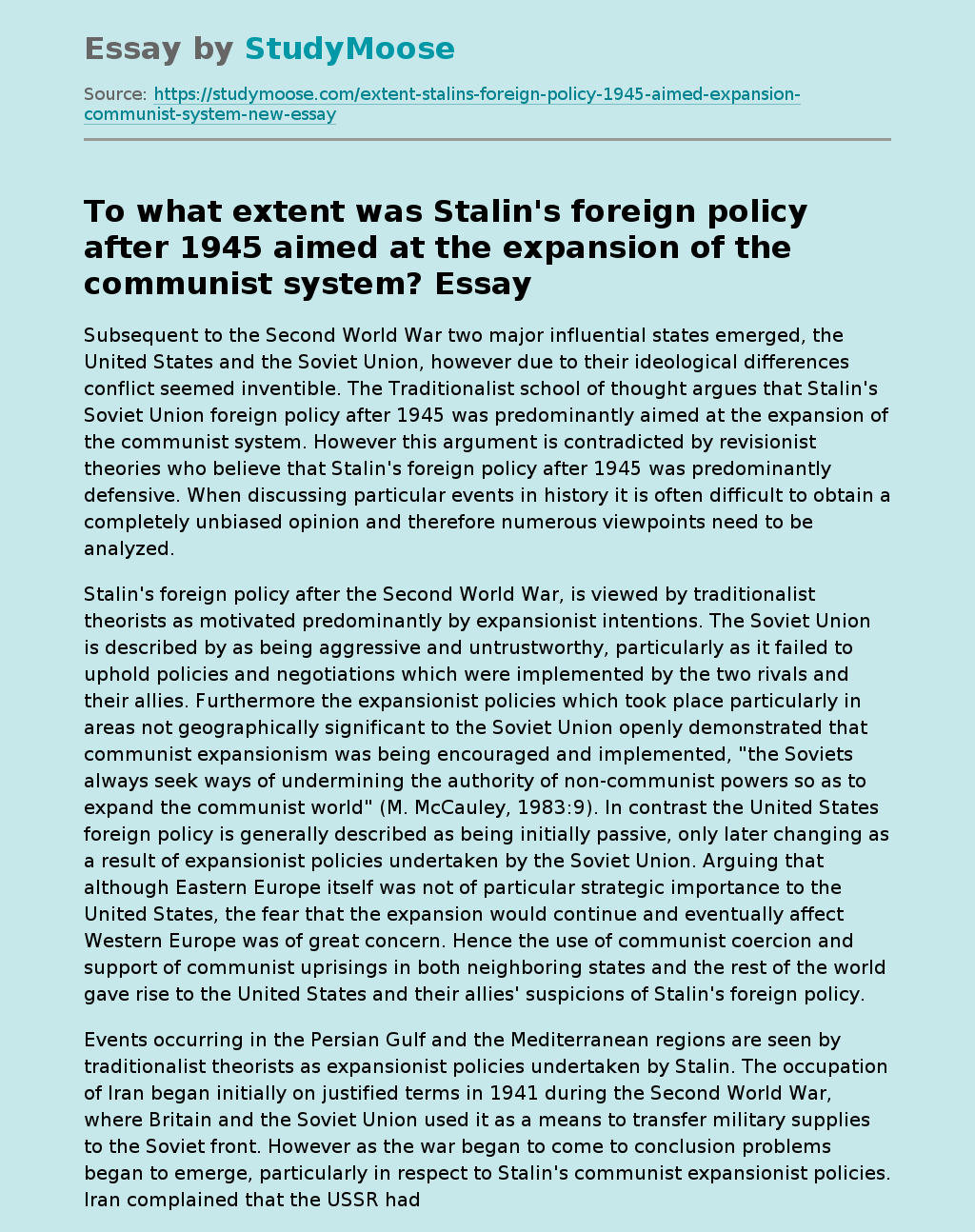