To what extent can Kaiser Wilhelm's reign 1880-1914 be characterised as 'personal rule'?

The reign of Wilhelm II has been subject to much debate by historians concerning Wilhelm’s aims of ‘personal rule’. Rohl for example states that from 1897 Germany was run as a “functioning monarchy” with power concentrated in the hands of one man, the Kaiser. An opposing view is that Wilhelm “possessed neither the character nor the aptitude to be his own chancellor and his leadership amounted to little more than whimsical flights of fancy and blundering interventions”. Can the reign of Wilhelm II be labelled one of ‘personal rule’ or was the Kaiser’s “limited knowledge of German politics” too much of a weakness for this to be achieved.

Don't use plagiarized sources. Get your custom essay on
“ To what extent can Kaiser Wilhelm’s reign 1880-1914 be characterised as ‘personal rule’? ”
Get custom paper
NEW! smart matching with writer

Wilhelm II was fixated with the idea of ultimate control; he “believed in personal rule without regard to parliament or public opinion” (Eyck). This idea was fuelled by the Kaiser’s belief in the ‘Divine Right of Kings’, the view that royal authority derives directly from God and therefore as emperor he should only have to answer to God.

Wilhelm’s desire to establish this policy of ‘personal rule’ was made possible by his monopolistic control over appointments to the Imperial government, Chancellors for example.

The initial years of Wilhelm’s rule did not display factors supporting the Kaiser’s policy of ‘personal rule’. The chancellor, General Leo von Caprivi proved to be more astute and independent-minded than the Kaiser had bargained for; he was able to introduce a line of ‘social measures’ in 1891, this undermined Wilhelm’s idea of ‘personal rule’ due to the certain degree of lost control over domestic policies the Kaiser experienced.

The resignation of Caprivi and the introduction of Hohenlohe (also known as the ‘straw doll’) as the new chancellor marked a change in domestic and foreign policy, one pointing more towards ‘personal rule’.

After 1897 it appears that the government was increasingly dominated by men who were closely in tune with the direction of the policies desired by the Kaiser. From 1897-1908 the Kaiser’s influence was quite marked; this combined with the extensive powers granted to the Kaiser from the constitution signifies the high point of ‘personal rule’. On the opposite side of the argument, the Kaiser was able to surround himself at court and in government with men who were prepared to bolster his own inflated opinion of himself by sympathising with his views, merely in order to preserve their own privileged positions. In this sense it is perhaps possible to speak of the Kaiser’s ‘personal rule’; even though it was not established through respect or fear, only through greed and manipulation.

A prime example of this height of ‘personal rule’ is in the Zabern Affair in 1913 when, after a series of disturbances in the Alsatian town o Zabern army officers overrule the civilian authorities and arbitrarily arrested a number of locals. Criticism of the army officers was based on the way they had ignored citizens’ rights and placed the army above the law. In the Reichstag Bethmann stood by the army and the Kaiser, but the political opposition was intense and the chancellor received a massive vote of no-confidence. For some historians, like Rohl, the Zabern Affair shows how, right up to 1914 the government was still dominated by the actions, decisions and personality of the Kaiser. The very fact that Bethmann was able to continue as chancellor despite a major defeat in the Reichstag is seen as proof enough of how the Kaiser ultimately provided the framework for policy and political decision making.

An opposing view is that Wilhelm was nothing more than a ‘shadow Kaiser’ – a front for the dominant elites who were determined to manipulate the system and government policy in order to preserve their own privileged positions. In this interpretation the Zabern affair is seen as a classic example of how the army was able to preserve its own authority and status despite the huge public outcry at its action. Hohenlohe began to realise that he had little influence in the German government and was seen as little more than a figure-head; as a result he resigned in 1900 and Von Bulow replaced him as chancellor.

The new chancellor’s domination from 1900-1909 should not be mistaken for genuine authority and purpose as the political survival for any of Wilhelm’s chancellors was dependent upon showing loyalty to the Kaiser. However, after the Eulenberg and Daily telegraph scandals Wilhelm’s personal position was undoubtedly weakened and the international situation grew increasingly tense. The military however gained an increasingly influential role at court and in government leading up to the ‘silent dictatorship’ of Hindenburg and Ludendorff. The Daily telegraph affair, although it was soon resolved demonstrated the constitutional limits of the Kaisers power, showing that the Kaiser’s political power was within a constitutional framework which consisted of powerful forces which acted as both influences and restraints.

In conclusion, Wilhelm may have appeared and behaved as an omnipotent autocrat, but his claim that “there is only one ruler in the Reich and I am he” was seriously weakened by many factors; the support of his chancellors and advisors appeared to be predominantly superficial and only for personal gain, the Kaiser’s limited knowledge of German politics was an obvious weakness along with his general attitude of detachment when it came to domestic and foreign policy; he was more interested in pleasure-seeking then strengthening his position as Kaiser, and as a result it is not possible to characterise his reign as complete ‘personal rule’.

To what extent can Kaiser Wilhelm's reign 1880-1914 be characterised as 'personal rule'?. (2020, Jun 02). Retrieved from https://studymoose.com/extent-can-kaiser-wilhelms-reign-1880-1914-characterised-personal-rule-new-essay 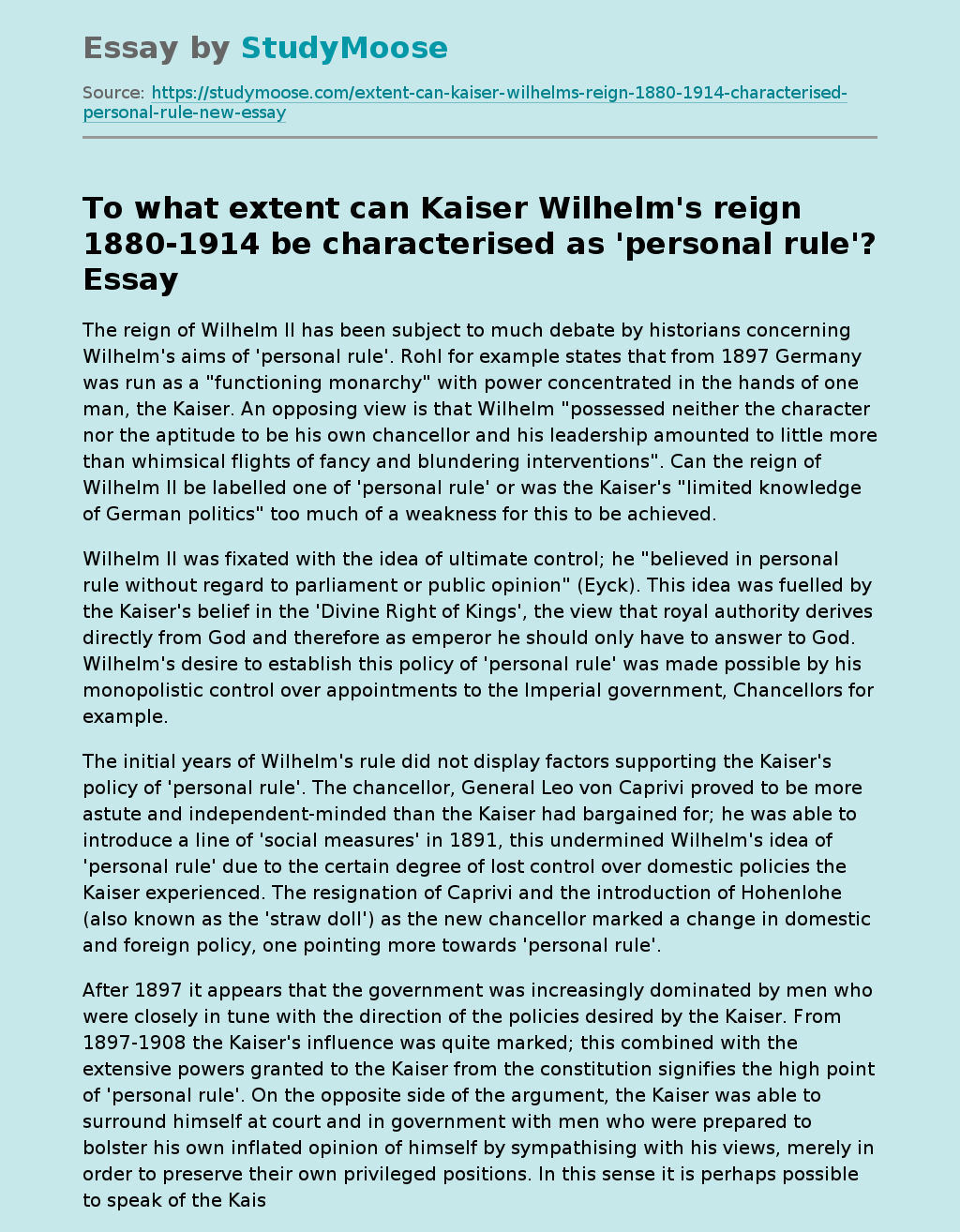