To what extent do you agree with Rita that Frank is 'a good teacher'?

In the play “Educating Rita”, Rita a working class uneducated 26 year old girl who works as a hairdresser signs up for a course at an open university. After being accepted she finds herself in the stale and dusty aired study of Frank, one of the many University lecturers working at the school. The play’s story unfolds the relationships between Frank and Rita and how each character changes throughout the play. This essay argues that Frank overall, is an excellent teacher, however some flaws are found within the boundaries of his teaching.

Don't use plagiarized sources. Get your custom essay on
“ To what extent do you agree with Rita that Frank is ‘a good teacher’? ”
Get custom paper
NEW! smart matching with writer

Backed up by many pieces of evidence such as quotes directly from the book, this essay will enhance the understanding of the extent to which Frank is ‘a good teacher’. Points that will be covered within the essay include the enjoyment that Rita has by attending Frank’s lessons, Frank’s attitudes towards teaching which will feature both the beginning and the end, and the fact that Rita has passed her exams with a high mark and her language has become more sophisticated.

Proficient in: A Good Teacher

Toward the beginning of the play Rita enjoys learning within Frank’s classroom and is tremendously enthusiastic towards the learning process.

The enthusiasm that is described here can be clearly seen in several parts of the play. A first example is seen by her clear desire to learn which is portrayed dramatically when Rita claims “everything” after answering Frank’s question, asking his student what she would like to learn. This bold answer plainly shows Rita’s yearning and magnitude of the amount that she is expecting to learn.

Another example which supports this argument is ‘because I wanna know”. This is a clear indication towards Rita’s utter enthusiasm to learn.

These two key pieces of evidence are clear and show Rita’s enthusiasm right from the beginning of her learning process without any motivation from her teacher. This point leads us on to Frank’s attitude toward teaching Rita and what his views are from the beginning and towards the end of the play. Early in the play we see that Frank is very distant from his job and does not seem to be interested in teaching Rita. After a long conversation between Rita and Frank for the first time, Frank decides that he is not committed enough to teaching Rita due to her high expectations.

This is shown at the end of Act 1, Scene 1, “you see I never – I didn’t actually want to take this course in the first place. I allowed myself to be talked into it. ” This quote illustrates that Frank never actually volunteered to take the job and instead was talked into it. Frank therefore has an explicit uninterested attitude toward his job. Among this Frank even admits himself a bad teacher shown in the following quote, “and the thing is, between you, me and the walls, I’m actually an appalling teacher”.

As we can recognize from the preceding two pieces of evidence, we can observe that at this point in the play we can see that Frank is not committed at all to teaching Rita. He does not believe he is capable of teaching Rita however he does not even make an attempt to improve his skills, which shows his uninterested mind-set. This is bound to change as the play proceeds. Within the middle and towards the end of the play we see a large change in Frank’s attitude to teaching Rita. We see this change through Frank’s outlook which shows his care for Rita’s education.

This is illustrated in, “Rita, how the hell can you write an essay on E. M. Forster with almost total reference to Harold Robbins”. Any superior and committed teacher will always give feedback towards their students and will always attempt to better the student. This is seen here in Frank who proves the extent to which he is a good teacher. Frank takes another step forward as a good teacher when he calls the work place of Rita in a short scene 6. “Yes you see she doesn’t know the details… time in? … Please… Yes… Thank you. This extract of a telephone call with an employee and work partner of Rita describes Frank as a teacher who more than teaches Rita but also ensures that she is aware of the time and location of her exams. Only a very committed teacher will ensure that the student is aware of details. Once again this quality of commitment is shown in Frank which I believe is only present in “a good teacher”. Rita is successful within her course and successfully passes her exams and has also grown to speak in a more sophisticated manner. We learn that Rita has passed her exams indicated by Frank’s remark, “I know.

A good pass as well. ” Any teacher’s main objective would be for their student to succeed, we see here that Rita has passed her exams with a high mark, which illustrates Frank’s competency as a teacher. He has clearly accomplished his task and has graduated Rita from her course. Another indication that Frank has clearly succeeded as a teacher is the change in Rita’s spoken English. From the beginning of the play we see a dramatic change where her language becomes increasingly sophisticated. An example at the beginning of the play where Rita’s language is simple and filled with slang.

Well that’s no good always meanin’ to, is it? Y’ should get on with it. ” These first words exchanged between Rita and Frank in the opening scene of the play shows Rita’s simplistic language, her apparent slang and improper use of words. Development of the play leads us to witness the change in Rita’s language, “of its type it’s quite interesting. But it’s hardly excellence”. Here we see that Rita’s language has developed a great deal. Her words are used well and her sentences are much more sophisticated. Many points suggest that Frank is ‘a good teacher’.

We can tell this through the enjoyment that Rita has during classes with Frank which is important as a student have some level of enjoyment to able to learn efficiently. Frank has clearly done this well. A teacher’s effort and attitude plays a large part in the success of ‘a good teacher’. Frank, in the early stages of the play does not show a healthy attitude and if he would have continued in this way Rita would not have done as well as she had. Frank seemed lazy and unprepared to put effort into his job and didn’t seem to care.

Providentially Frank’s attitude changed quickly within the course of the play. We see changes such as incisive correcting of Rita’s work indicating the care that is put in. Furthermore we see that Frank takes the initiative to call Rita for details on the exam. All these examples are lucid qualities of a good teacher and Frank falls perfectly among this margin. For further proof of his abilities of a good teacher, Rita was able to pass her exams with high marks, and has also become much more proficient in her language using more sophisticated and appealing words.

To what extent do you agree with Rita that Frank is 'a good teacher'?. (2020, Jun 02). Retrieved from https://studymoose.com/extent-agree-rita-frank-good-teacher-new-essay 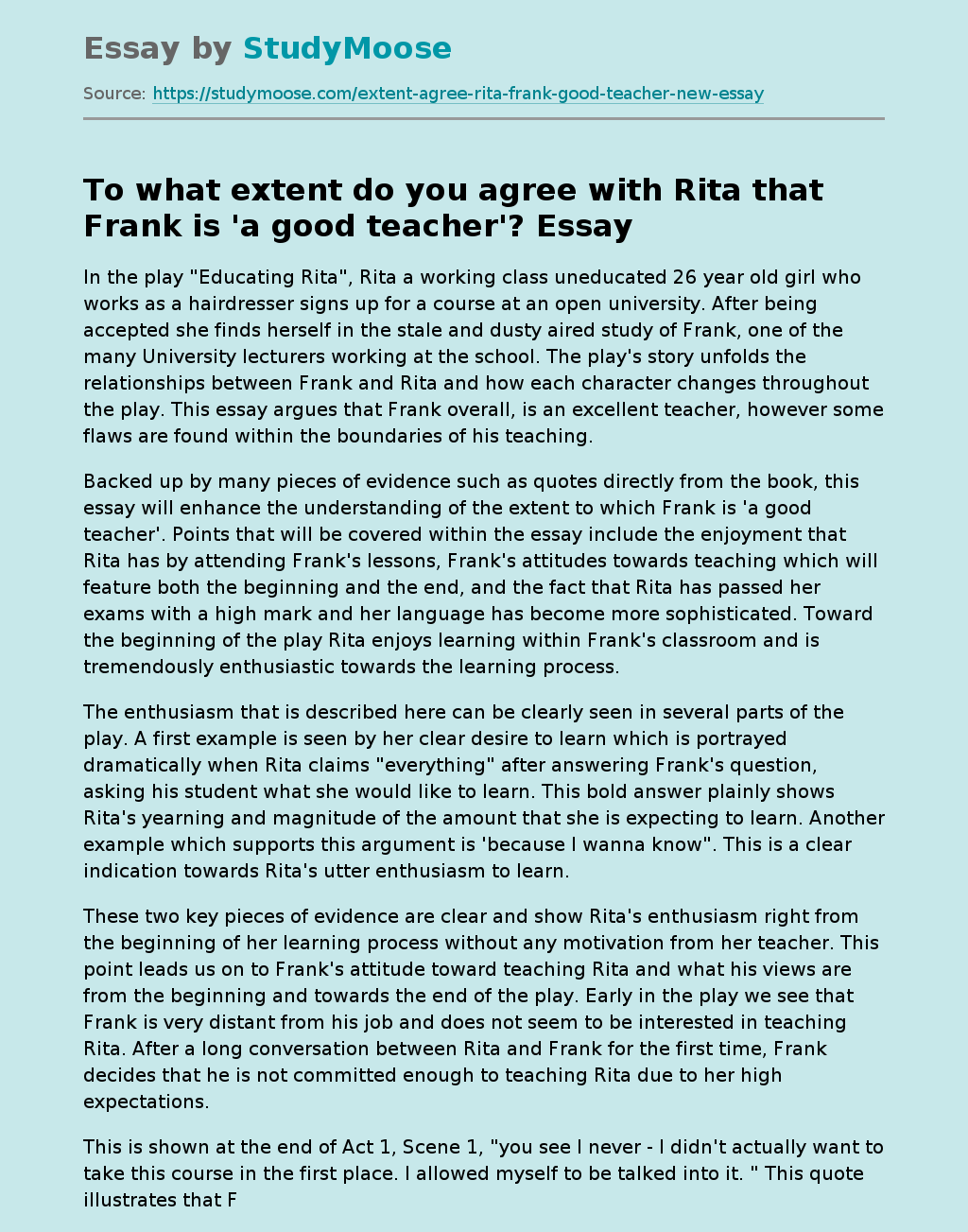