Throughout history, many life experiences and events have been recorded through means of oral storytelling, journal logs, media recording, newspaper articles, etc. As humans, when we engage with some of these pieces, we’re able to relate and later identify ourselves with similarities in the work. With that being stated, one could assume that just like readers anticipate to connect to literary work, authors can reflect pieces of them through their work to the whole world. Alice Walker, an African American author as well as activist, has graced American literature with an ample number of engaging novels, poetry, short stories, etc.

Don't use plagiarized sources. Get your custom essay on
“ Expressing Personal Truth Through Literary Work ”
Get custom paper
NEW! smart matching with writer

One of her many most prominently famous pieces of work happens to be her 1973 short story, “Everyday Use”, where she appears to add personal pieces of her to the main characters in the story. At least one of her main characters gives the impression of being a reflection of Walker due to parallel similarities.

The story, “Everyday Use”, introduces three African American women as the main characters.

Proficient in: Everyday Use By Alice Walker

Mama, who is our main protagonist and narrator, first opens the story “I will wait for her in the yard that Maggie and I made so clean and wavy yesterday afternoon.” (Walker 2376). This opening line is suggesting that she’s waiting on the arrival of another and mentions our other leading lady, Maggie. The reader can assume that whoever is being waited on must be of importance since they made an effort to make the yard look “so clean”. The story continues and Mama expresses that Dee, Maggie’s older sister and our third primary character, is the one that they’re awaiting.

Through Mama’s narration, the reader can pick up tones of admiration and anticipation. As Dee is introduced into the story, the reader gets a feel of animosity between all three women. Dee seems to ooze an opposing demeanor compared to her mother and sister. Her presence, which exemplifies higher class and sophistication, seems to make the other two a bit eager to please. After getting aquatinted with her and her new boyfriend, Dee seems to have come to visit with the ulterior motive of collecting important family items that have been passed around for years. Mama is taken aback when asked by Dee if she can “…have these old quilts?” (2381). Initially, she suggested that Dee take interest in the other quilts that she had. Dee continues to insist on the ones she already had, which probes Mama to state “I promised to give them quilts to Maggie, for when she marries John Thomas.” (2381).

This causes a snarky protest from Dee in which she states, “She’d probably be backward enough to put them to everyday use.” This comment alone gives the reader an idea of how Dee may view her family in comparison to herself. They continue to debate with one another until a defeated Maggie enters the room and actually offers up the quilts in an effort to please her sister. At this point in the story, Mama realizes just how much she’s allowed Dee to have her way against both Mama and Maggie’s best interest. Mama proceeds to let Maggie have the quilts after snatching “…the quilts out of Miss Wangero’s hands…”(2382) . The whole ordeal comes as a shock to both sisters and causes Dee to cut her visit short. As she goes to find her boyfriend and proceed to exit, she leaves them with one last comment, “You ought to make something of yourself too, Maggie. It‘s really a new day for us. But from the way you and Mama still live you’d never know it.” (2382). After Dee leaves, Mama and Maggie “sat there just enjoying, until it was time to go in the house and go to bed.” (2382). Clearly, those two have found peace with their new relationship.

When analyzing the character, Dee, we notice some primary traits right away. She displays some pretty positive characteristics in the beginning of the story: educated, sophisticated, strong willed, and seemingly well accomplished. Dee is held at higher standarad due to her achievements and progression from being a poor farm girl to a successful college intellectual. Much like Alice Walker’s tale growing up, Dee seems to have formed an estranged relationship with her family upon her quest for higher education. According to Biography.com, Walker also grew up poor in the state of Georgia amongst her siblings and parents. She, much like Dee, tended to challenge the preconceived ideas that she was initially raised on. The social institution of education had also put a strain on Walker and her family, much like we see between Mama and Dee. We see parallel similarities between Dee and Walker in terms of their Afro American centrism and support of the advancement of black people. Sam Whitsitt reinstates this belief in his own critical reading In Spite of It All, “Moreover, the name Dee is given, “Wangero”, is the same name Walker herself was given when she went to Africa.” (Whitsitt 449).

In the story, Dee seems to struggle with her true sense of self which is evident through the change of her name as well as her new weird boyfriend. She seems to be trying to portray anything other than the Dee that her family knew. Walker also struggled with finding her place in the world. During her journey of self-discovery, she went from swapping universities to traveling abroad to Africa and coming back with an unwanted pregnancy as well as struggling with thoughts of suicide (Warren 229). As the story progresses, a more selfish and ruder Dee becomes evident. Walker was no stranger to critics and public enemies as she transcended in her career. People, such as her daughter, would go on to ridicule and accuse Walker of being selfish and careless as well.

Although Dee and Walker share a similarity in traits, Walker also seems to reflect her old self in the character of Maggie. Almost identically, Walker suffered an injury as a child just as Maggie did. Walker was shot in the eye by a BB gun at the age of eight years old and struggled with insecurities and a lack of confidence throughout her adolescent years. The character, Maggie, is also very self-conscious about her wounds and even tends to shrink in the presence of others. Unfortunately, Walker was no stranger to the feelings of resentment and shame that accompanied her low self-esteem. In some ways, you can correlate Maggie with Walker as a child and Dee with Walker as she began to overcome that time in her life.

All in all, Walker does an exceptional job at expressing parts of her in this piece. Even though Walker may just be an exceptional writer with a creative imagination and soul, the main characters seem to be a reflection of Walker due to parallel similarities between the two. 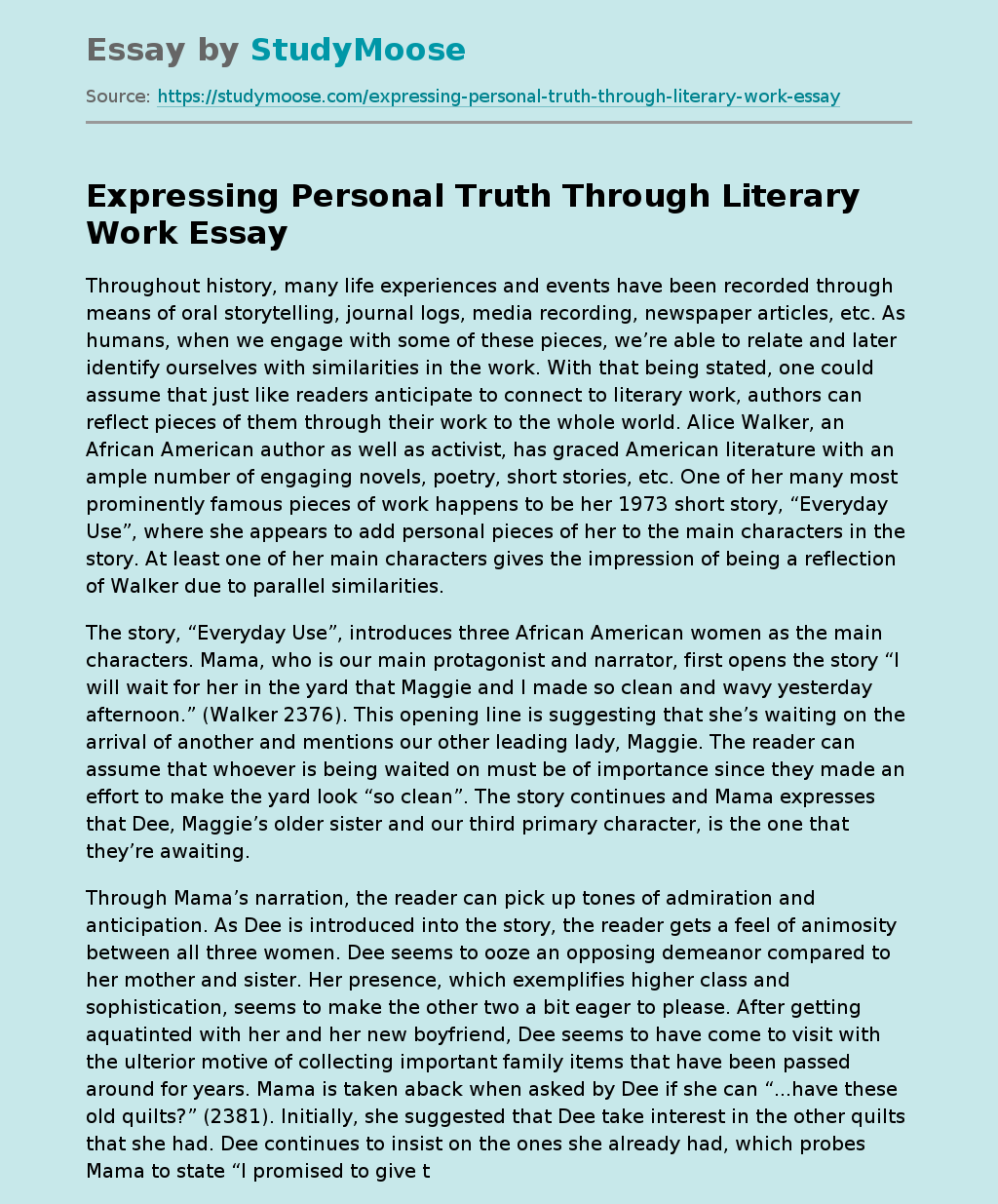