Exploring The Plot And Subplot of "The Castle"

The Castle starts just after the men of a town have returned from fighting in one of the crusades.

It would appear from their reactions that none of them expected much to have changed whilst they were away however they are shocked or even appalled to discover just what the women got up to when their backs were turned, most notably the abolition of the church and the lack of social status, the men clearly are not used to everyone being equal in the way that the women now are.

Don't use plagiarized sources. Get your custom essay on
“ Exploring The Plot And Subplot of “The Castle” ”
Get custom paper
NEW! smart matching with writer

Krak, a prisoner who was brought back by the crusaders, has the idea that the men must build a castle in order to reinstate their authority over the women or at least that’s what he told them in reality he is planning the castle to destroy the women.

Krak doesn’t see the castle in the same way as the men do they see it as a defence Krak sees it as a weapon especially when the neighbouring towns build their own castles bigger and better than the castle being build by the crusaders.

Meanwhile there are several complicated relationships going on between some of our characters.

First there is the marriage between Stuckly and Ann, Stuckly is clearly still in love with his wife as he has emphasised from the start that he has saved himself for her

However whilst the men were away the women started their own all female commune where they only use they have men is to have children by and this is just what the men who stayed behind were used for.

Because of the general lack of men and their new way of life the women started lesbian relationships with each other. One of which is between Ann and Skinner, Stuckly cannot understand this after he saved himself for his wife.

However if being a two timer wasn’t bad enough Ann is in lust for Krak and even falls pregnant by him. Krak then rejects Ann and she becomes so distraught she stabs herself through the stomach in front of both Stuckly and Skinner killing herself and the baby.

After Ann’ death both Skinner and Stuckly suffer breakdowns

At the end of the first act Skinner is considering killing Krak but seduces a builder from the castle and kills him instead. After this murder Skinner is put on trial and as her punishment she has the corpse of her victim tied to her and from then on she has to carry this body around

In the end though it all becomes too much for Stuckly to cope with and he goes mad.

Exploring The Plot And Subplot of "The Castle". (2016, Jun 24). Retrieved from https://studymoose.com/exploring-the-plot-and-subplot-of-the-castle-essay 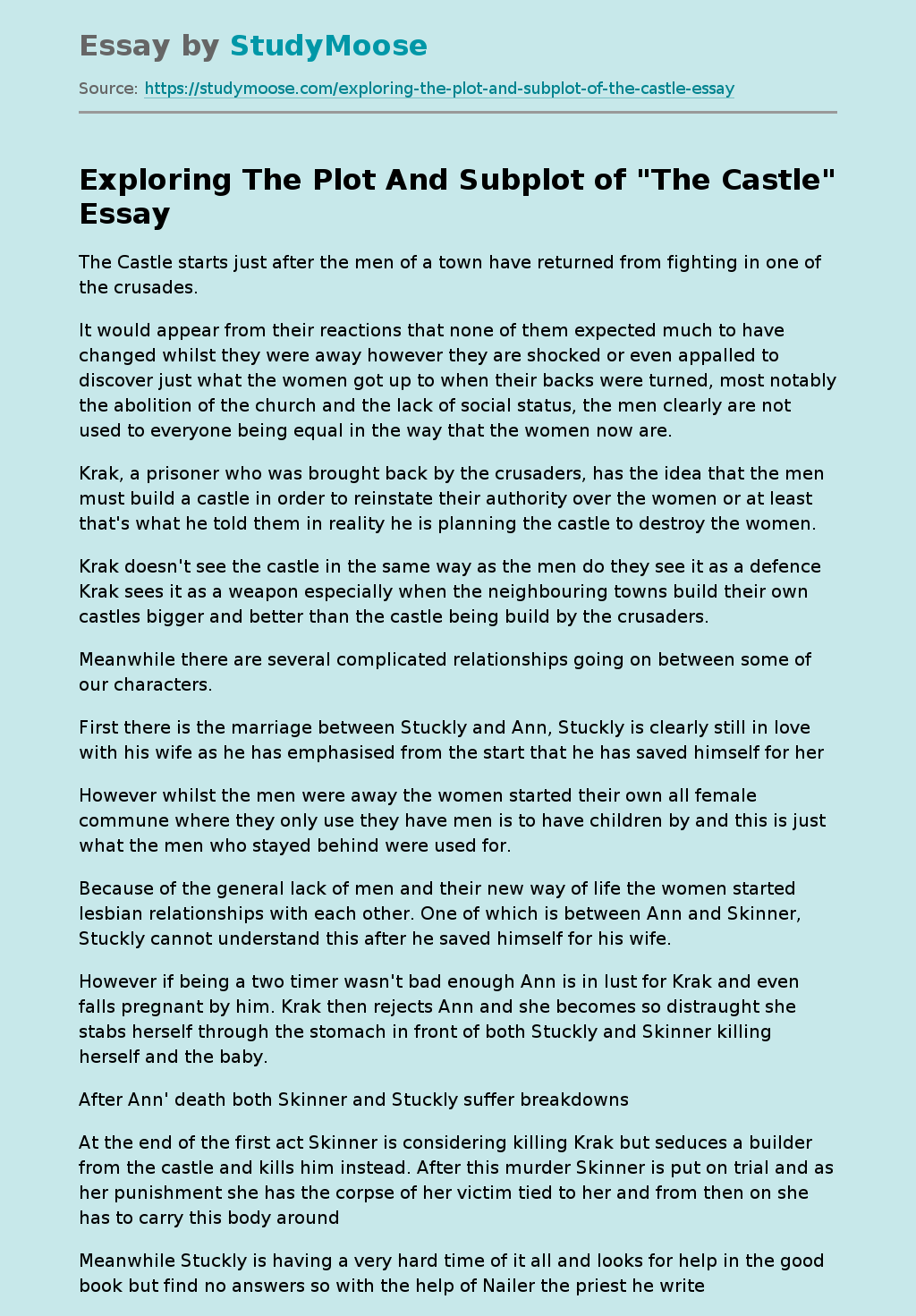