Explore the ways in which Shakespeare presents Lady Macbeth and Browning presents the speakers in Porphyria’s Lover, My Last Duchess and the Laboratory

Shakespeare presents Lady Macbeth in such a way that she is shown as a strong and powerful woman. Her ability to manipulate Macbeth to murder Duncan in order to get more power is a key example of this aspect of her character. Browning also presents his speakers in a similar way to Shakespeare through their need to control. The main way that both authors achieve this is through the use of language. Techniques such as rhyming couplets and semantic fields are used to emphasise the control that the characters have or want to achieve.

Don't use plagiarized sources. Get your custom essay on
“ Explore the ways in which Shakespeare presents Lady Macbeth and Browning presents the speakers in Porphyria’s Lover, My Last Duchess and the Laboratory ”
Get custom paper
NEW! smart matching with writer

Additionally, a range of imagery is used throughout all of the texts, allowing the reader to gain an understanding of the characters. In their writing Shakespeare and Browning don’t follow the general patriarchal society which makes the murders so horrific and odd as women weren’t generally thought of as thinking of murder or committing a murder.

Lady Macbeth tries to gain power by pushing Macbeth to murder Duncan, when she says she would have ‘dash’d the brains out, had [she] so sworn as [Macbeth]/ [Has] done to this’.

This shows Lady Macbeth using horrific imagery to manipulate Macbeth into murdering Duncan as she is saying if she would ‘das[h]’ the brains out of her own child, he should be able to murder Duncan. Lady Macbeth wants to be more masculine so she feels more superior to Macbeth. Lady Macbeth uses violent imagery, which proposes that she isn’t the stereotypical woman that society suggests.

The phrase ‘das[h] the brains out of her own child’ shows she is prepared to do anything to gain power. In the 17th century women were seen as nurturing and caring so to be thinking about murdering her own child would be seen as horrific. In a similar way Browning’s poem ‘The Laboratory’ also uses a variety of imagery; however here he particularly focuses on the imagery of death. The use of an exclamation mark at the end of ‘And Pauline should have just thirty minutes to live!’ shows the speaker is excited at the prospect of murdering her partner’s mistress as it is as though she is speaking in a loud or excited tone. The use of imagery ‘just thirty minutes’ shows that she likes the pressure and the short time scale for murder. By doing this it emphasises the woman’s psychotic behaviour as women were generally not meant to even be thinking about murder never mind excited for it.

In all three of Browning’s poems the speakers use self-justification for their actions. In ‘Porphyria’s Lover’ the speaker justifies murdering his lover. When the speakers says ‘From pride, and vainer ties dissever,/ And give herself to me forever,’ he justifies murdering his lover; he believes that, because she is a higher class than him, she cannot truly love him and is too proud to be with him. As there was no proof that the woman was going to love him he is using his deluded personality as an excuse for murdering her. In a similar way in ‘The Laboratory’ the killer also uses self-justification. The speaker describes ‘The soul from those masculine eyes’. This shows the speaker criticizing the enemy to make it look more acceptable that she is murdering someone. In society a woman is not generally thought of as a murderer, so by her describing the victim as a ‘masculine’ person she is trying to make her actions reasonable.

Shakespeare and Browning both use semantic field of love and death with Browning particularly focusing on possession in ‘Porphyria’s Lover’. When the speaker says ‘she was mine, mine’ he implies he loves her so much that he wants to kill her so that no one else can have her. This is showing the speaker’s narcissist personality because he would rather her be dead so she can’t be with anyone else. This is similar to Shakespeare’s work as Lady Macbeth and Macbeth see the power as their possession. An example of semantic field of death in Macbeth is when Lady Macbeth says ‘who should against the murderer shit the door’. This contrasts with the semantic field of love in Macbeth. Through this juxtaposition, Shakespeare shows that lady Macbeth is willing to use her love as a means to manipulate Macbeth; she will use her love to control him, no matter what the cost.

In both Macbeth and Browning’s ‘The Laboratory’, the speakers use masks, both literal and metaphorical, to cover up their psychotic behaviour. An example of this is in ‘The Laboratory’ where the speaker says ‘Now that I, tying thy glass mask tightly.’ Here, her mind is becoming fragmented and she is literally hiding herself from others as she protects herself from the fumes. In Macbeth Lady Macbeth urges Macbeth to put the mask of a murderer back on- ‘Was the hope drunk/Wherein you’d dress yourself?’ –which suggests Macbeth is feeling guilty. If he adopts a façade he’ll be able to kill without feeling remorse and no one will suspect them. This also implies that they are hiding their true personality and putting on a mask to hide what they are really going to do. People today still put on an act to hide their true feelings; Shakespeare and Browning’s texts allow the modern audience to relate to this universal concept.

Browning and Shakespeare both present their speakers as mentally disturbed but use rhyming couplets as a way to create stability to cover up their true personality. In ‘The Laboratory’ the speaker and her motivations are seen as troubling and sinister so using rhyming couplets, which creates a predictable pattern acts as an attempt to mask their true personality; the pattern attempts to impose a structure in her life. Browning also uses rhyming couplets in ‘My Last Duchess’ to also create stability to mask the speakers deranged personality; the couplets are limited, as is the Duchess’s life, so it suggests that the Duke has a level of structural control although he was unable to control her behaviour. In a similar way Shakespeare also uses rhyming couplets but uses them to show lady Macbeth’s firmness of decision: ‘Away, the mock the time with fairest show:/False face must hide what the false heart, doth know.’ Here Macbeth has given into Lady Macbeth’s persuasion and had made his final decision on murdering Duncan. Using rhyming couplets seems misplaced as they are orderly yet a murder isn’t. Shakespeare was influenced by The Gunpowder Plot as the link between Guy Fawkes’s plan to kill the king and Lady Macbeth’s idea to kill King Duncan was very similar in a way that it was unnatural to kill the king and go against what God has chosen.

Shakespeare shows Lady Macbeth thinking and talking about murder; Browning also uses a woman as a murderer in ‘The Laboratory’. Both authors use women to show how horrific the murder really is, as women were seen as caring, mother figures who were automatically seen as kind and loving- so for women to be thinking of murder shows their psychotic personality and rebellion against social expectations. An example of this is when Lady Macbeth says ‘unsex me here,’ which shows Lady Macbeth wanting to become more masculine, so she will be more capable of murder. By Shakespeare presenting Lady Macbeth in this way shows us that Lady Macbeth is capable of anything which is seen as unusual because women weren’t generally seen as being able to do a lot of things men were. Another example of this concept is in ‘The Laboratory’ when the speaker says ‘Sure to taste sweetly. This shows that the speaker finds pleasure in murdering someone.

The speakers in ‘My Last Duchess’ and Lady Macbeth are both controlling and possessive. In ‘My Last Duchess’ the speaker says the metaphor ‘Taming a sea-horse.’ which suggests that the Duke has a controlling personality as it is like he is treating the Duchess as a slave and modelling her into what he wants her to be. The Duke shows he is controlling possessive as he says ‘That’s my last Duchess painted on the wall’; by using the possessive ‘my’ the Duke show us his true personality as he is saying the Duchess was, and still is, his. An example of possessiveness from Macbeth is ‘Only look up clear;…leave the rest to me.’ This shows Lady Macbeth being assertive and taking charge showing us her controlling and manipulative personality. By doing this it shows us that Lady Macbeth is the one who was the most power hungry as she is taking control and sorting everything out; it also shows that Macbeth is quite timid when it comes to Lady Macbeth because he just follows her orders. As women were seen as weaker than men, Lady Macbeth has to use Macbeth to get what she wants.

In conclusion both Browning and Shakespeare present the characters as powerful and manipulative. Browning uses pronouns in both ‘The Laboratory’ and ‘My Last Duchess’ in order to show the relationships between the characters. Shakespeare also uses role reversal as he uses a woman telling a man what to do instead of the other way around; this could therefore be seen as subverting traditional gender roles. In this century a woman telling a man what to do is not seen as unusual but in the 17th century it wasn’t seen as the standard thing.

Explore the ways in which Shakespeare presents Lady Macbeth and Browning presents the speakers in Porphyria’s Lover, My Last Duchess and the Laboratory. (2018, Sep 10). Retrieved from http://studymoose.com/explore-the-ways-in-which-shakespeare-presents-lady-macbeth-and-browning-presents-the-speakers-in-porphyrias-lover-my-last-duchess-and-the-laboratory-essay 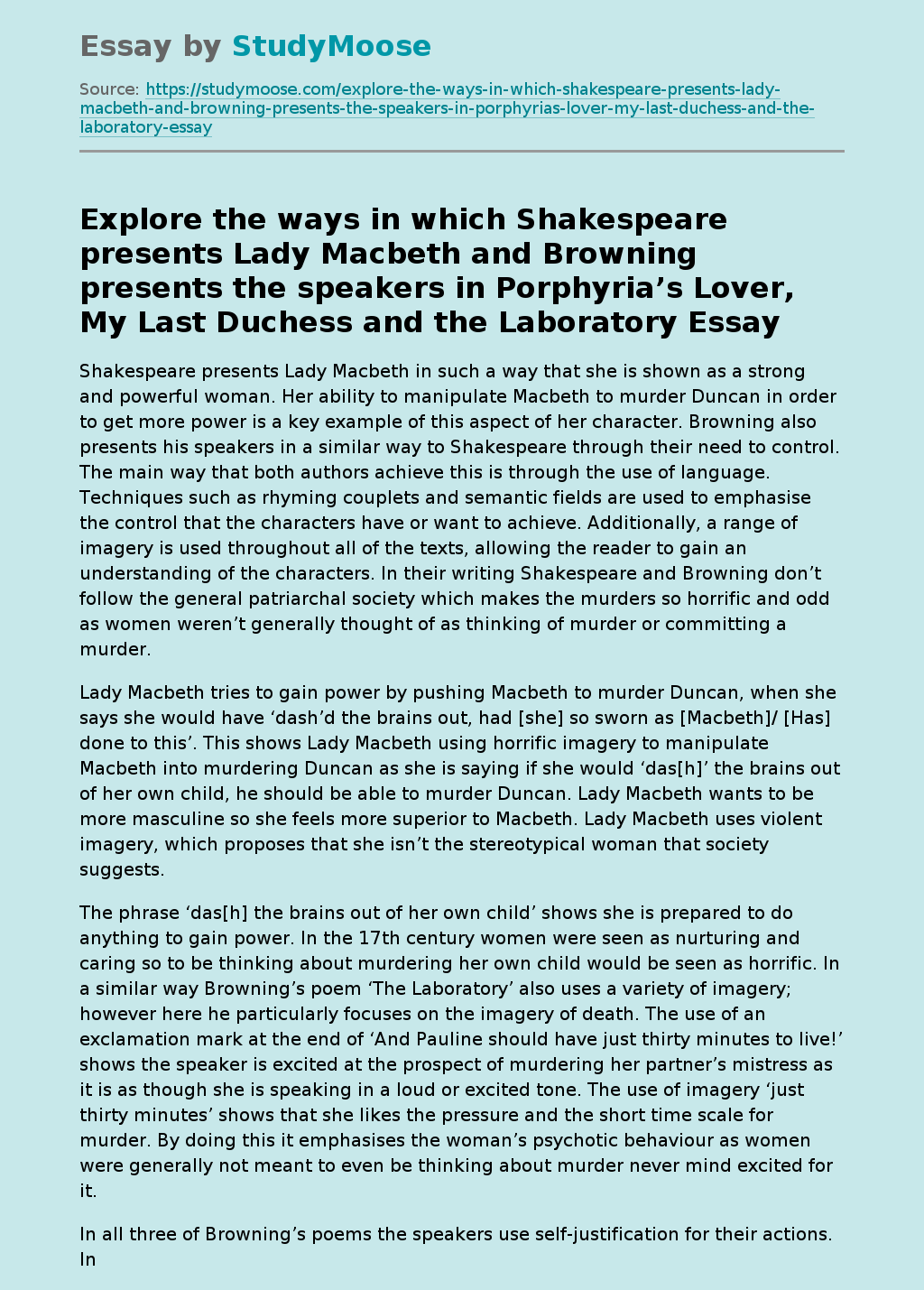