'Explore the nature of love in the extasie': John Donne poetry analysis

In his poem, The Extasie, John Donne describes his own attainment of a state of ecstasy (literally meaning, to stand outside of oneself), through his physical and spiritual proximity to his lover.

In his earliest work (for example Elegie: To his Mistris Going to Bed, and The Flea) – which could be loosely termed his ‘lust poetry’ – Donne’s focus tends to be on (or at least around) the sexual act and the beauty of the human (and more particularly the feminine) form, whilst in his later work (such as his Holy Sonnets) he explores religion and death, this poem falls into the transitory phase of what could be termed Donne’s ‘love poetry’ (for example, The Good Morrow).

Don't use plagiarized sources. Get your custom essay on
“ ‘Explore the nature of love in the extasie’: John Donne poetry analysis ”
Get custom paper
NEW! smart matching with writer

Characteristically then, the main focus of The Extasie is his love for a specific woman (as opposed to women in general, or rather, any random woman – as is the case in his lust poems), and how this love is so transcendent that it leads to a platonic extasie.

In the first stanza, the tranquillity of the setting is established, with the imagery of ‘a pillow on a bed’, a ‘reclining head’, suggesting relaxation, and the line ‘Sat we two, one anothers best’, suggesting serenity and the intimacy of the lovers.

This continues into the subsequent stanza with the elegant, and yet deeply intense image of ‘Our eye-beames twisted, and did thred Our eyes, upon one double string’, which apart from highlighting the apparent totality of their absorption in one another, also alludes the contemporaneous belief that sight constituted ‘eye-beames’ being emitted from one’s eyes and illuminating your surroundings.

In the 4th stanza, Donne starts to bring in more explicitly the spiritual union that begins to manifest out of the physical intimacy.

Initially it may seem as if he is attempting to upset the otherwise peaceful setting, by introducing elements of conflict into in the line, ‘As ‘twixt two equall Armies, Fate Suspends uncertaine victorie’. However, if you take into account the fact that the use of epic military metaphors in relation to love is a common poetic motif (and was even more so in Donne’s time), it becomes clear that this is not the case, and that the intended effect is more to highlight the fact that the lovers are ‘eqaull’ in the relationship, and to link this simile to their souls hanging in the air, ‘twixt her, and mee’.

Moreover, the idea that their souls ‘Were gone out’, to ‘advance their state’, is suggestive of Donne’s neo-platonic philosophy, and the idea of two souls, blending together to form an indivisible and perfect hybrid – as can be seen in the line, ‘he knew not which soul spake, Because both meant, both spake the same’, demonstrating the complete intellectual union between the two.

The line ‘(all which before was poore, and scant,) Redoubles still, and multiplies’, goes on to suggest the idea that the souls reinforce each other’s weaknesses, whilst the line, ‘That abler soule, which thence doth flow, Defects of loneliness controulles’, continues this concept, showing the perfection of the ‘abler soul’, by highlighting the absence of any defects, even one such as loneliness, which are innate human response to certain situations.

This leads on to the idea that the defect of mortality is also absent, and that the union is eternal – as evident in the line ‘For, th’Atomies of which we grow, Are soules, whom no change can invade’. These ideas all derive from the Plato’s concept of the Forms, in which it is theorised that for every material thing, a perfect form of it exists, of which the material form is merely a pale shadow or imitation.

For Donne, it is the transcendence and perfection of the love between himself and the woman, that leads to their transition to a higher state (their Extasie is ‘by love refin’d’). Furthermore, the mingling of their souls which follows on from the extasie, has a purifying effect, ‘unperplex(ing)’ them, and resulting in him ‘part(ing) farre purer than he came’ – Donne realises in this poem, that intellectual and emotional intimacy that he experiences transcends bodily love, and that ‘it was not sexe’, but rather something beyond the physical world.

In addition to this, Donne brings in the theme of alchemy to his presentation of love – something common throughout much of his poetry and generally during that period. Indeed, he presents love as the alchemist in the union of the souls – ‘Love, these mixt soules, doth mixe again, and makes both one, each this and that’ – imbuing it with the power to transform and transmute souls. This is also evoked in relation to the body in the 14th stanza – ‘Nor are drosse to us, but allay’ – in which he describes the body as being an alloy that strengthens the soul.

This distinction between body and soul is also very Platonic; however, the way that the body is presented here, differs greatly from Plato’s attitude to it, and from the presentation of the body previously in the poem. For example, in the fifth stanza, ‘sepulchrall statues’, suggests a certain irrelevance and a lack of the vivacity of the soul, whilst the transcendence of the soul over the body, and the idea that, ‘They’are ours, though they’are not wee, Wee are Th’intelligences, they are the spheare’, objectifies the bodies as a mere inanimate vessel, subservient to the intellect.

However, as Donne does go on to admit, ‘We owe them thankes’, as the initial physical intimacy was, ‘all our meanes to make us one’, and without ‘their forces, sense to us’, the union of their souls through their love, would never have occurred. Essentially then, Donne sets up the idea that in fact the body has its own intrinsic value upon which the soul is dependent, whilst going to describe that in fact, the body, which in spite of trying to ‘beget Spirits, as like soules as it can’, in order to govern itself, begins to fail without the presence of the soul (‘That subtile knot, which makes us man’.

Essentially then, the conclusion would appear to be that body and soul are interdependent, and whilst it is clear that Donne ultimately values spiritual love over bodily love (perceiving the body as a ‘prison’, in which ‘a great Prince…lies’), he accepts the one’s reliance on the other, as after his experience of Extasie, he realises that in fact it matters little, as there is, ‘Small change, when we’are to bodies gone. ‘

'Explore the nature of love in the extasie': John Donne poetry analysis. (2017, Aug 01). Retrieved from https://studymoose.com/explore-the-nature-of-love-in-the-extasie-john-donne-poetry-analysis-essay 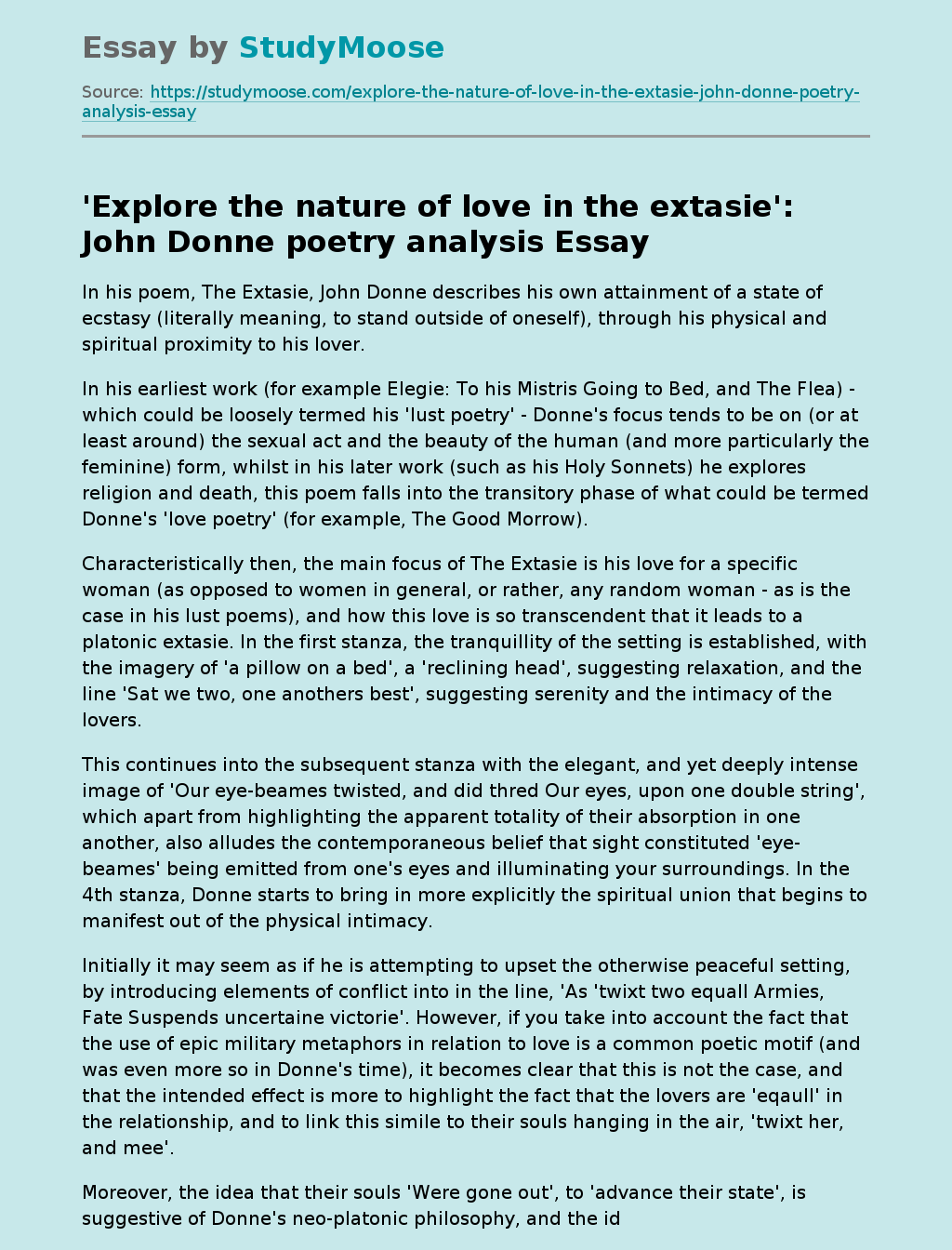