An exploration of Shakespeare's presentation

An exploration of Shakespeare’s presentation of Rome and Egypt in Antony and Cleopatra In the play, Antony and Cleopatra, Shakespeare presents Rome and Egypt to be very contrasting areas, showing how dissimilar the two places are, such as culture and lifestyle. Although Shakespeare portrays the cultures to be very different he also shows some similarities between the two societies, such as the influence the opposing vicinities hold over people and how the cultures can manipulate people’s beliefs and views.

Don't use plagiarized sources. Get your custom essay on
“ An exploration of Shakespeare’s presentation ”
Get custom paper
NEW! smart matching with writer

Egypt is portrayed as being Epicurean, meaning they enjoy the finer things in life. The Epicurean lifestyle also shows how the Egyptians are relaxed and relatively carefree and how they are passionate about food, drink and luxuries. Rome, on the other hand, is revealed as being stoic, meaning they are authoritative, demanding and respectful. They are willing to fight for land, power and respect. When Antony was in Egypt, he was influenced to adapt to the Egyptian lifestyle. I feel this shows how persuasive and influential Egypt and Cleopatra is.

It is obvious that Antony has changed from his stoic lifestyle and adapted into the epicurean way of life, at the opening of the play when Philo speaks “Take but good note, and you shall see him the triple pillar of the world transformed into a strumpets fool. ” From looking at what Philo is saying it think it is obvious how Antony has changed from being a respected member of the triumvirate into Cleopatra’s fool. Philo has no respect for Cleopatra and sees her as a prostitute; I also think he feels that Cleopatra is using Antony for her own needs, “To cool a gypsy’s lust.

” From Philo’s opening speech I feel you can see how Antony has lost the respect of the Romans. As Antony is in Egypt he has lost his respect and influence in Rome and is, therefore, losing his power as Antony stays in Egypt instead of returning to where he is honourable and powerful, because of this you can see how the epicurean lifestyle is manipulating him, “Let’s have another gaudy night. ” This quotation also shows the epicurean influence as he is more interested in love and sex than he is power and honour.

Another comparison between Rome and Egypt is the outlook towards war. Rome is continuously fighting for power and influence, while Egypt will only fight if completely necessary. Rome declares war with Pompey and is willing to fight on land or at sea. “The empire of the sea,” I feel this quotation shows that Rome is seen and portrayed as being powerful. The work “empire” also creates the image of authority and respect, also a powerful and strong unison of men.

While, in comparison, Cleopatra tried to fight in the war against Caesar, but fled from the battle, “Leaving the fight in height, flies after her. ” As she has such a great influence over Antony, when she left the battle he followed. I feel Cleopatra fleeing battle shows how her epicurean culture influences her decisions, as the epicurean lifestyle doesn’t encourage battle. Although Cleopatra is trying to portray herself as being stoic like Antony, I feel this scene proves she is not. However, when Cleopatra commits suicide, she takes on the stoic outlook.

I feel this is shown when she declares, “Let’s do’t after the high roman fashion, and make death proud to take us. ” I feel this quotation shows her genuine love for Antony, this being the reason she wants to die in “Roman fashion…. ” However it was Roman custom to die by falling upon their sword, in the form that Antony died. Although Cleopatra wished to die in “Roman fashion,” she didn’t die this way, she committed suicide by being bitten by asps, therefore did not die in stoic fashion, and she died in an honourable way, avoiding disgrace by taking her own life.

Another contrast between the two cultures is the way power is portrayed. Rome is influenced by men while Egypt is controlled by women. I feel Shakespeare presents how men are capable of controlling a powerful and authoritative city such as Rome, while women are only capable of controlling a frivolous and care-free country. This also shows how men are more willing to fight for what they want, while women will only fight if necessary. This is shown when Antony leaves to fight Caesar.

Cleopatra only chose to fight as she saw it necessary. In my opinion, I can see Egypt’s lascivious attitudes in one of the opening scenes. The atmosphere is relaxed and casual. The scene is in Egypt and opens with Cleopatra, Charmian, Alexas and Cleopatra’s servants indulging in frivolous activities, such as having their fortunes read by a Soothsayer, whilst indulging in food and drink, another of the typical luxuries Egypt has to offer, “Bring the banquet quickly; wine enough for Cleopatra’s health to drink.

From this quotation I notice the relaxed tone that is shown through the use of tranquil language, such as frivolous and joyous conversations not orders or commands, and the long sentences create an image of a relaxed, happy and carefree atmosphere. Banquets are a regular occasion in Egypt; it is a part of everyday life, and not only done to celebrate a special occasion.

An exploration of Shakespeare's presentation. (2020, Jun 02). Retrieved from https://studymoose.com/exploration-shakespeares-presentation-3176-new-essay 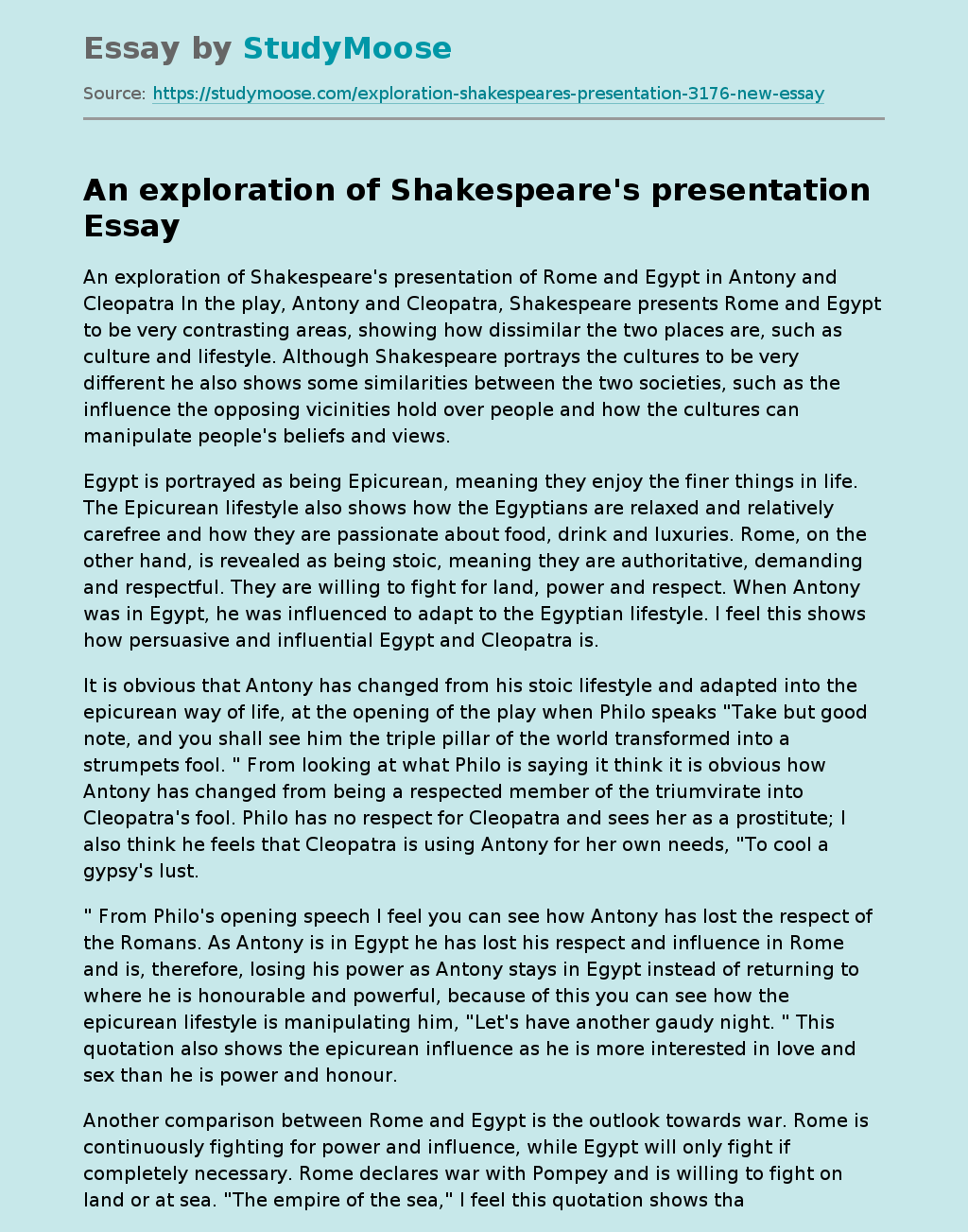