Exploration of Social Injustice in Arthur Miller's The Crucible

Throughout the ages, humans have proven themselves countless times to be disloyal, selfish, and underhanded. It is with a degree of smugness and superiority that we often regard events such as the cruel, corrupt governmental systems of the past, abuses of the church, and mass murders in the name of religion. We tend to believe that we have made improvements in areas such the definition and protection of personal freedoms and we have faith that our journalists will uncover and reveal the very beginnings of corrupt governmental behaviors.

Don't use plagiarized sources. Get your custom essay on
“ Exploration of Social Injustice in Arthur Miller’s The Crucible ”
Get custom paper
NEW! smart matching with writer

Our society looks at both the present and the future with optimism and their unflagging confidence in our own ability to create something superior to those governments that have come before us. This causes us to neglect to face the corruption present in our own lives. Most people can recall when they first learned about the Salem Witch trials that occurred in 1693 because they were shocked and horrified that the townspeople let these events take place and spiral.

What people do not realize is that they are like the townspeople in Salem, Massachusetts and similar injustices and dangerous abuses of power in the name of government and religion are happening right around them now. Lies, deceit and corruption, have always reverberated throughout American history and people need constant reminders to stay vigilant and aware. As a writer, I am able to reach a large audience with this reminder and I saw my play The Crucible “as a vehicle for political commentary” (Crucible Drama Criticism).

I paralleled my experiences during McCarthyism with the tragedies of the Salem Witch trials to not only remind the public that history can repeat itself but to also demonstrate my disgust with the hypocrisy of religion and the corruption of our government and to point out how righteousness in both religion and government is historically used to justify the destruction of personal freedoms.

Before you viscerally protest these accusations, let me remind you that it was only ten years ago that I was accused by the McCarthy court of being a communist sympathizer. Most of the “townspeople” assumed that if the government was suspicious of me- then I must have done something wrong. These McCarthy trials were well publicized and anyone could see for themselves that the charges against not only me but hundreds of others also, were largely vague and unsubstantiated. The general public (“the townspeople”) believed more in the upstanding behavior of their government than their own critical thinking and analysis or my already established stellar reputation. I witnessed McCarthyism first hand and saw the flaws of the United States Government with my own eyes. During McCarthyism, a man named John McCarthy “led ruthless Senate investigations of alleged Communist Party members and sympathizers in the United States”. During his investigations, a “climate of mistrust” formed over the American people and abuse of powers and laws promised by the Constitution were disregarded (Schoenberg and Trudeau). The government-dominated control over the people and fear was instilled in every living American. As I saw the friendships and relationships crumble around me, I realized that this was not the first time this event had happened. I began to see the connections between my own encounters in the 1950s to the Salem Witch Trials. I identified with the characters and their relationships as they realized the fraudulence among each other. On the most obvious, simplest level, as I stood accused of being a communist sympathizer and saw my former friends and colleagues “pass [me] by as if [I] were invisible”, I lived the experience of the accused witches (Wheatley). When I was approached, encouraged and threatened to sign an anti-communist agreement admitting something I had not done, I saw myself in John Proctor as he too refused to sign a confession that he was a witch. John Proctor in particular, was used as an outlet for myself. During my time of writing, my own marriage was crumbling and I was guilt-ridden with knowing I was to blame. When John Proctor, overcame his crippling guilt from the affair and became a direct voice emerging from the madness that was circling around him, I saw him as a beacon of hope for my relationship. I wrote his relationship with Elizabeth in the end as completely honest and supportive to be used an aspiration so that I “may speak my heart” just like John Proctor was able to. (The Crucible, PAGE NUMBER).

By using my writing, I was able to reflect my feelings of disgust and discomfort with the U.S. government and how they were handling their issues. Many analysis criticisms of my writing argue that the Crucible uses themes of guilt, greed, and deception to prove that topics can apply to past American events and our world today. I did mask my opinions on the government by using the Salem Witch trials as my cover and utilized themes to connect my opinions about current events. By experiencing the flaws of our system, “intersections between art and politics” began to form. Writers, painters, and artist of all kinds mold their art to emphasize their emotions and feelings. With the Crucible, my disgust with the vulgar injustices shown through.

Exploration of Social Injustice in Arthur Miller's The Crucible. (2021, Jun 18). Retrieved from http://studymoose.com/exploration-of-social-injustice-in-arthur-miller-s-the-crucible-essay 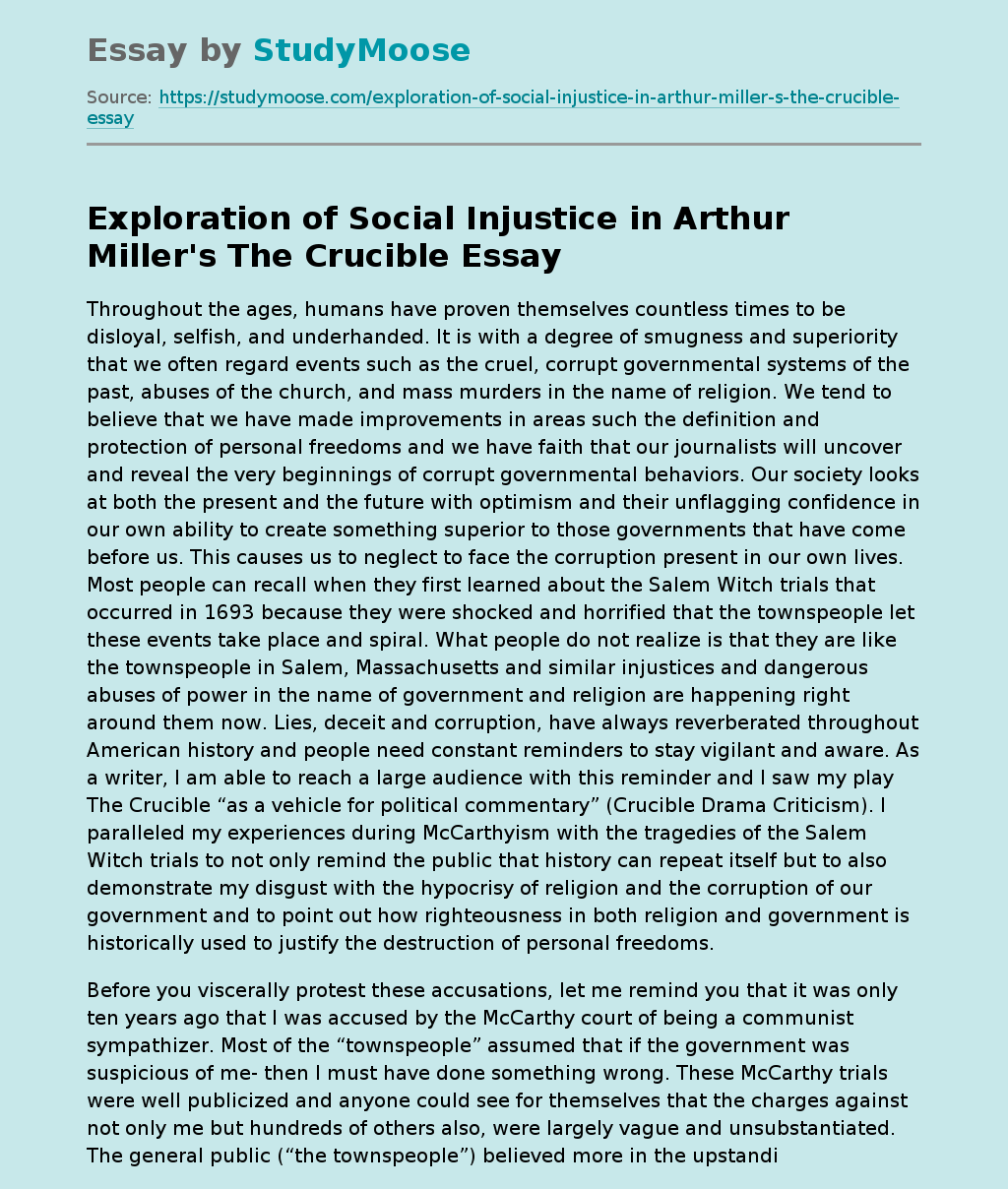