Explain the concepts of equality,diversity and rights in relation to health and social care

Equality Act 2010
The Equality Act aims to simplify and harmonize the old equalities legislation. Over the last four decades discrimination legislation has played an important role in helping to make Britain a more equal society.

Don't use plagiarized sources. Get your custom essay on
“ Explain the concepts of equality,diversity and rights in relation to health and social care ”
Get custom paper
NEW! smart matching with writer

However, the legislation was complex and, despite the progress that has been made, inequality and discrimination persist and progress on some issues has been stubbornly slow.

The Equality Act 2010 is intended to provide a new cross-cutting legislative framework to protect the rights of individuals and advance equality of opportunity for all; to update, simplify and strengthen the previous legislation; and to deliver a simple, modern and accessible framework of discrimination law which protects individuals from unfair treatment and promotes a fair and more equal society. The Act has replaced the Disability Discrimination Act, combining it under one governing umbrella with all equalities issues. A disability access audit is still the best way to ensure you meet your duties under the Equality Act in regards to accessibility.

What is the importance of equality, diversity and recognizing rights in early years services?

1. Legal – having proper policies and procedures in place should prevent successful compensation payouts for proven discrimination.

3. Social – children can learn to be better citizens in a culturally diverse society, if given the right orientation from the beginning.

Why is equality and diversity important in a mental health profession?

One could argue it isn’t and that best person should always be chosen regardless as It is mainly a political ideal.

However in this case there may in fact be an argument for it as follows. it may be important for those suffering mental issues to feel they are part of a wider community and having a wide selection of diversity etc. shows that society is all inclusive and will include them too. this can be very important for some mental attitudes and health problems.

Equality and diversity is important for the patient, and prevents stereotypes and misdiagnosis. For example it is common in turkey to say you hear voices of spirits Djinns.Without diversity and understanding the person could be classed as schizophrenic. I know of a god-believer who got diagnosed as bi-polar just because the professionals dealing with her were not from her walk of life. I think it should be compulsory to imply it to all nations and races available. Why is it important to promote equality recognize diversity and respect rights in health and social care? 1. To promote equality

a) In a democracy it is everyone’s right to have access to good health and social inclusion. Thus if any section of society is omitted then none of us can claim to be citizens of a democratic society.

b) Everyone is also at physical risk, even if only some sections of society are initially exposed, to disease and ill health.

2.To respect rights and recognize diversity
a) Consciousness, self-esteem, culture and physical health are interrelated Note: this might mean having to provide extra resources particularly for people who do not yet share competence in the major language

Note: these high ideals are often held to, more in principle than in fact, in the majority of societies. This is because there are both passive and active (i.e. transfer of scarce resources) components of rights in all fields- education, health, justice, security, etc. In societies which emphasize individualism and demonize government intervention it is particularly difficult to achieve these aims.

DISCRIMINATORY SELECTION DECISION
Kai, a Native American, files a charge after he applied for a promotion, was interviewed, and was not selected. The investigation reveals that, based on objective qualifications, Kai was deemed one of the top candidates but the job ended up going to Ted, a similarly qualified White candidate from outside the company. The hiring manager tells the investigator that he thought that Kai was well qualified but he chose Ted because he “seemed to be a better fit; I’m comfortable with him and I can see him in my job one day.” When pressed to be more specific, the manager says he liked the fact that Ted worked for a competitor. However, the investigation reveals that although Ted did work for another company in the industry, it was not really a competitor.

Employee and management witnesses tell the investigator that Ted’s experience working for another company in the industry was no more valuable than Kai’s experience working for the company itself. The witnesses also tell the investigator that, until now, the company practice had been to prefer qualified internal candidates over similarly qualified external candidates. There is reasonable cause to believe that Kai was discriminated against based on his race or national origin. What are the causes an effect of discriminatory practices?

It can lead to a change in balance of workforce/people.
If old/ethnic minorities/disabled etc. people are disadvantaged, there may be an unusually high proportion of young, white, fit people. This would deter anyone from the discriminated groups from applying.

The physical effects of discriminatory practice maybe that the individual who is being subjected to discrimination starts to feel unworthy within society, therefore this leads on to them starting to inappropriate there appearance, lack of hygiene, which doesn’t reflect on a good person in the eyes of their community. Their health could also deteriorate – poor mental health, bruises, maybe from them self-harming to find a easy way to get away from the pain and unhappiness they are getting from individuals within community with discrimination towards them. Potential effects of Discriminatory Practices?

Example of discriminatory practice is an old woman in a nursing home, in her notes she has been labeled as a ‘biter’. This makes care assistance reluctant and resistant to her How will this affect her physically, emotionally, mentally.

Well I would think that she is not being given the proper mental care in the first place. As she is old and in a nursing home, she probably is a little forgotten by family anyway. This will create even less positive contact with her causing her to regress and become even more depressive. Unfortunately today we don’t always give the mental therapy that is needed to help elder people and leave them to suffer emotionally. I think she will eventually deteriorate at a faster pace and increase chances of premature death.

What do you do? No one wants to go the extra mile to help these individuals and some nursing homes hire people who really don’t care and certainly don’t want to get bitten. Sad. So much of the medical profession is geared to making money and not in the quality and quantity of valued caring.

What are the Emotional effects of discriminatory practice?

Emotional effects of discriminatory practice are that individuals become stressed, for example as a result of being bullied. Also they can find themselves becoming more emotional with feelings of anger and frustration. These in all cause the individual to become upset which can in some cases remain a constant emotion that doesn’t seem to disappear.

Explain the concepts of equality,diversity and rights in relation to health and social care. (2016, Apr 11). Retrieved from https://studymoose.com/explain-the-concepts-of-equalitydiversity-and-rights-in-relation-to-health-and-social-care-essay 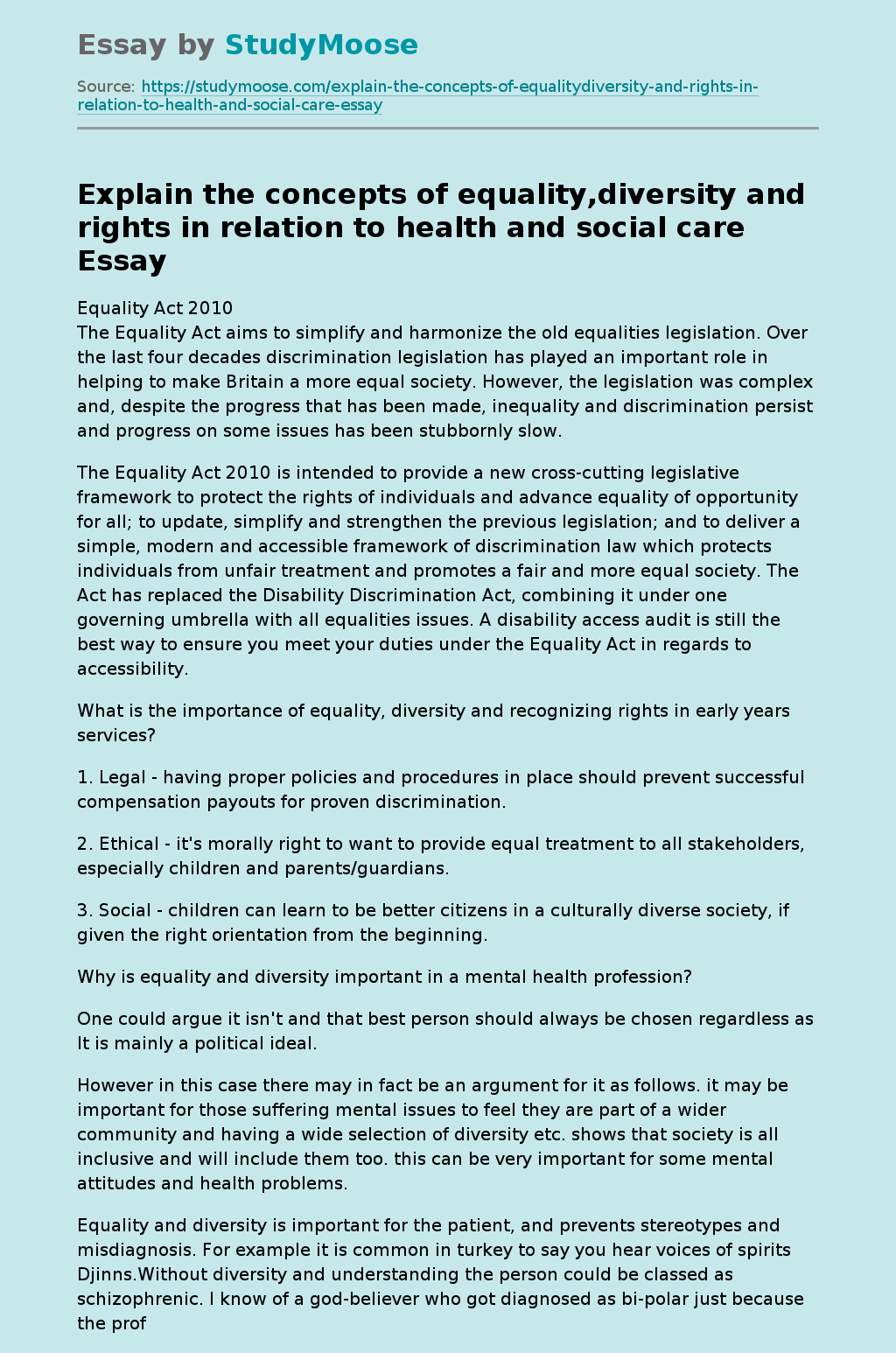