"Explain the concept of homeostasis with reference to the control of heart rate, breathing rate, body temperature and blood glucose levels"

Homeostasis is where the body keeps a constant internal environment. This involves all the metabolic processes taking place In the body as well as the blood, tissue fluid and all the contents in the body’s cells. There are a range of variables from heart rate to the blood glucose levels that the body will take into account. Negative feedback will occur when something changes from its normal in the body.

The body then will come back with a response to cancel out the difference to bring it back to its normal.

Don't use plagiarized sources. Get your custom essay on
“ “Explain the concept of homeostasis with reference to the control of heart rate, breathing rate, body temperature and blood glucose levels” ”
Get custom paper
NEW! smart matching with writer

An example of this is if blood glucose level falls the body will then convert the glycogen in the body to glucose which will bring back the energy in the cells to its normal amount. This system requires receptors so that they are able to detect the change in your body. As well as receptors it also needs a control centre so that the information that has just been received can be processed to then give the correct response of what the body should do.

Most of the control centres can be found in the brain. It will also need effectors so that after the change has happened and the body is back to normal it can reverse the change to keep the body at its original state. The brain and the central nervous system controls something called the homeostatic mechanisms. This is when they anticipate whether there may be a rise or a fall compared to that of the normal.

An example of this is the feeling of being cold or tired this is a result of having not eaten for a sufficient period of time.

This has then been sent as a message to the brain which your brain will then tell you to eat so that the energy you get from the nutrients in your food will counteract those feelings and make them disappear. As this is an anticipation from the central nervous system and the brain it is called feed forward as it hasn’t happened yet. Heart rate

The heart is regulated by impulses produced by nerves acting on the sino-atrial node (S-A node). These nerves are called “sympathetic” and “parasympathetic” nerves. The sino-atrial node is found in the upper part of the right atrium it is made up of a cluster of excitable cells. Both the sympathetic and parasympathetic systems are two branches that come off the automatic nervous system which controls the heart. The parasympathetic nervous system- This is a calming system as it is active while the heart is resting. It causes the heart to beat slower than it would normally.

The main nerve involved is the vagus nerve without it the heart rate would increase. The sympathetic nervous system- This occurs when the body is feeling stressed. As a result of it, it causes the heart to beat faster it also adds a boost to the hormone adrenaline which occurs during fear. The nerves involved in this system is called the cardiac nerves.

The sino-atrial node releases nerve impulses that are sent across the atrial muscle fibres which causes them to contract. Cells that form the atrio-ventricular node (A-V node) catch those impulses which are then relayed to a band o conducting tissue. This tissue is made from large modified muscle cells that are called Purkinje fibres. So that the atria can complete their contractions and allow the atrio-ventricular valves to close there may be a delay for the transmission to come through. The valves of the hear are found on a fibrous figure-of-eight.

It is centred between the atrial and the ventricular muscle masses. The first part of the conducting tissue will enable the excitatory impulses to be able to cross to the ventricles. It will then split into both sides of the ventricular septum where it will then spread out into their muscles. They pass extremely quickly which result in them contracting which forces the blood to travel around the body to the organs that need it. Breathing rate

To control your breathing there is a respiratory control centre this again is located in the brain stem. This will observe the levels o carbon dioxide and oxygen in your blood. It also makes sure that your breathing stays at a steady rate which will maintain balance as well as homeostasis In the body. Most of the time you don’t have to think about your breathing at all or how you control it as your brain does it automatically for you.

However in some cases in aerobic activity you control your breathing for example in Pilates when instructed through each stretch you get told when to inhale and exhale during the exercises. Saying that if the oxygen levels go down below a certain point your brain will override your control and make you breathe. During exercise or any physical activity that require more oxygen than normal.

The oxygen in your blood will decrease while the carbon dioxide in the blood will increase. When the respiratory control centre in the brain realises that the levels aren’t normal as a result it will increase the heart rate and the breathing rate to counteract it. The brain will slow the heart rate and breathing rate once the exercise has stopped this will make sure that it maintains the homeostasis in the blood. While resting your breathing is at a steady rate. This means that there will be the right amount of oxygen in the blood on the inhale as a result the right amount of carbon dioxide will come out the blood in exhale. Body temperature

On average your normal body temperature is 37°C. Our body maintains this temperature by balancing the heat we generate compared to the heat we lose in everyday life. Saying that not our whole body is 37°C for example are fingers and toes remain at a lower temperature as a result of the energy being lost from the blood while travelling to the tips. There are temperature receptors in our skin which once detects change in the external temperature will send a message to the hypothalamus in the brain. Again in the hypothalamus processing centre (brain) which will detect the changes in temperature of the blood. There are 2 ways in which the brain tells the body to keep its temperature at 37°C.

The first one is if someone is really cold then the hair on the skin if the hair is on ends then it will trap more warmth compared to if it is flat on the skin. The second one is if someone is really hot then the glands on their skin secrete sweat which increases the loss of heat when it evaporates, as a result it cools the body down, It slows back down when the body temperature returns to normal. During vasodilatation the warm blood will flow closer to the surface of the skin so that the heat will be able to transfer into the air. As a result of this the skin will become redder. During vasoconstriction which is where the blood vessels that supply war blood constrict, as a result this will reduce the blood flow in turn this will reduce the heat that can be lost. In this case their skin will look pale. Blood glucose

This involves the kidneys keeping the water balance at the correct level of water in and out of the body. This will ensure that that the cells in our body work efficiently. The kidneys is where the blood gets filtered while passing through, these molecules are made up from water, glucose, salt and a waste product called urea. It then will reabsorb what the body needs which includes glucose salts and water back into the blood.

It then travels around the body. The products that haven’t been fully absorbed are excreted from the body. It mainly consists of urea but there may be left over water glucose and salts that the body doesn’t need. In the brain the pituitary gland controls how much ADH is produced and released into the bloodstream which as you know travels to the kidneys to get filtered. Which in turn controls the concentration of urine. It also checks the concentration of blood plasma.

When there isn’t enough water in the body the hypothalamus will detect it and send a message to the pituitary gland which will then release the ADH hormone, this will ensure that the urine is more concentrated resulting in less water, this will be maintained by the kidneys. As a result the water levels in the blood will return to normal. Cells make their energy from the glucose in the body this is why glucose levels need to be regulated tightly. As a result of this if there is too much glucose in the body may lead to diabetes 2, if too low it may lead to starvation of the body.

"Explain the concept of homeostasis with reference to the control of heart rate, breathing rate, body temperature and blood glucose levels". (2016, May 21). Retrieved from https://studymoose.com/explain-the-concept-of-homeostasis-with-reference-to-the-control-of-heart-rate-breathing-rate-body-temperature-and-blood-glucose-levels-essay 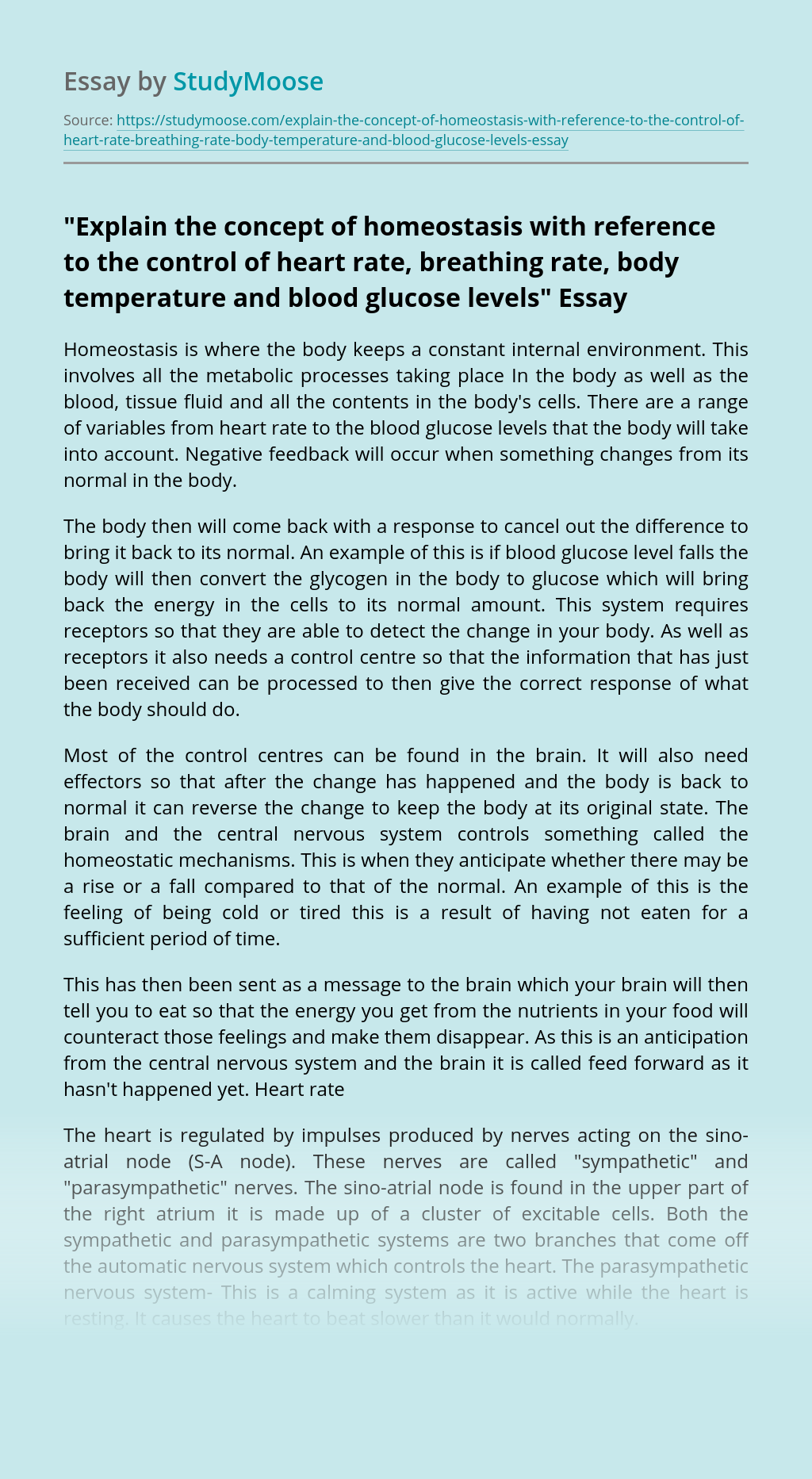