There are many health conditions that end in specific nutrient needs, and influence what people can and cannot eat. It is important that people have a healthy diet, and get the needed nutrients, nut it can be complicated when you have to stay away from certain foods like junk food to maintain a balanced diet.

Diabetes mellitus is a condition where the hormone insulin is not being naturally made by the pancreas, is being made in small amounts or is not being used properly by the body.

Don't use plagiarized sources. Get your custom essay on
“ Explain Possible Influences On Dietary Intake ”
Get custom paper
NEW! smart matching with writer

If left untreated, the most sever type of diabetes would lead to certain death because of the lack of glucose in the cells and vital organs. Type 1 Diabetes is the less severe form of diabetes which is NIDDM (insulin dependent diabetes mellitus). Type 2 Diabetes IDDM is treated with insulin which can be treated with insulin injections, unlike NIDDM which can be treated either just by the individual’s diet or with diet and tablets.

This is having intolerance to gluten, which can be found in wheat, barley and rye. Gluten causes the immune system to make antibodies, which attack the lining of the bowel. E This can have an effect on the body’s ability to absorb nutrients from food, and can lead to anaemia and osteoporosis. It also can increase the risk of bowel cancer.

People who suffer from coeliac disease need to eliminate all foods that have wheat, rye, and barley in them from their diet.

Irritable bowel syndrome (IBS) is a condition where the function of the bowel is disturbed, causing abdominal pain, flatulence, bloating and either constipation or diarrhoea, or both. However, through examination there is no found problem in the bowel. The cause of it is unknown, but the nerves in the gut has been found to be overacting, and some individuals can find certain foods that cause their symptoms. Sometimes IBS can lead to diarrhoea caused an infection. Some people discover that they have these symptoms after taking antibiotics, which kill the normal unharmed bacteria that is in the bowel. There is a lot of varied advice that has been given to people with IBS, but the best thing to do is experiment with the diet to try and find out which foods will make the condition worse, and stay away from them.

Lactose is the natural sugar that is in milk. This tolerance is very common and can be mild or severer. Children who are lactose intolerant do not produce lactase, which is an enzyme that breaks down lactose into glucose and galactose before it is absorbed during digestion. Children who suffer from the server form of this condition find it hard to put on weight and suffer from diarrhoea. This happens because the lactose ferments inside the bowel, which causes bloating.

Some people are allergic to certain foods. A food allergy is sometimes confused with food intolerance but it is a lot more serious. An allergic reaction can be severe and life-threatening. Nuts, eggs, soya, and wheat are common allergies in adults. However any food can cause allergies.

Having contact with the food that you are allergic to, can lead you to show the following signs and symptoms within minutes/hours:

Some people can develop a severe reaction called anaphylactic shock, which is rare but can be fatal. The symptoms can develop all over the body, causing swelling, a rash (hives), loss of consciousness, low blood pressure and breathing problems. It is vital that every effort is made to prevent the person from being given the food that causes this reaction. Anyone who is known to have a severe food allergy should be prescribed an Epipen, which they should carry with them at all times.

Loss of ability to feed independently

Sadly some people are unable to independently feed themselves, either throughout their lives, or following and accident, leading to paralysis, or the development of a debilitating condition. Another reason could be that they cannot consume food through the mouth and have to be fed through a tube. If some degree of a patients independence can be maintained then it should be, because there are a wide range of tools that can used to aid people who are struggling to feed themselves. Some of these tools include a wide range of handled cutlery, plate guards and non-slip mats. Another way of maintaining a service user’s independence would be to cut their food up into manageable proportions.

Sometimes it is impossible for an individual to feed themselves. Which may be due to a cognitive impairment, like advanced dementia, where the person cannot recognise that there meal has arrived. Whatever the reason may be for requiring full support when eating and drinking, it is vital that the service user’s meals are served while they are still hot. The service users should not feel like they are a burden or feel like they are being a pain, so you should create a relaxed situation, where they can enjoy the meal. Some people need to be fed through a tube. This is usually due to problems with digestive system. Swallowing issues, known as dysphasia, can cause a person to frequently choke, or find in difficult to maintain a healthy nutritious diet. A stroke or cancer of the oesophagus can cause this dysphasia.

‘Meal patterns’ are about the way a person takes their food made. Some people prefer to have three meals a day. However, there are many different variations. Some families eat together, but in the busy world that we live in people are eating fast food, and microwave meals.

Eating in between meals, which was once opposed, is now the norm in the UK. If the snacks were healthy foods like fruits. However, snacks and sweets usually are usually high in fat, salt and sugar. Those who eat a lot of junk food significantly increase their risk of obesity, high blood pressure and heart disease as they get older.

Most people have a preference when it comes to food and very few people like every food that if offered to them. Some people believe that eating animals is wrong and prefer become vegetarians. Some people go even further and become vegans who don’t eat any products that come from animals.

Another influence on the diet is the food can be purchased. It is important that healthy food is available or you would just start to eat junk food simply because it is in the house. People who live in their own houses, which are unable to cook or shop by themselves, would need to make sure that the food and drinks that they would need to buy are available when they are needed and wanted. Lunchtime can usually be provided by the local meals. Hot meals are delivered daily. The food should be kept above 63°C to prevent food poisoning. It is less of a risk to keep the food hot than to reheat it, however if the food is being reheated after cooling down is still must be hot in the middle of it. For other meals the service users may be able to manage them by themselves as long as the food is in the house. A home care assistant or a relative or a neighbour for help.

Eating at home means that you can have complete control over what you eat. Cooking with from raw ingredients will highlight the bad things that you are putting into your body which may make you want to eat healthier. Research that was carried out in 2006 which stated that the British public spent £1.9 billion on ready meals and 30% of adults in the UK eat at least one ready meal a week. In 2008 a Tesco survey was carried out in 2008 on home cooking, which was then reported to The Daily Telegraph, discovered that people in the UK were cooking more foreign foods than traditional British foods.

According to the Office of National Statistics (ONS), the amount of money that is spent on eating outside the home has doubled between 1992 and 2004. The risk of regularly eating out is that the temptation to eat fatty and salty foods is there, which can be eaten in moderation. The Food Standards Agency website give advice and information on making healthy choices.

People who take part in demanding actives will have different needs regarding their dietary needs. Athletes usually have their own personal dieticians to give them advice on what diet is appropriate for them to stick to. The international Conference on Foods, Nutrition and Sports in Lausanne (1991) decided that the following nutrient intakes for most sports: 60% -70% of calories in the diet form carbohydrates.

Meaning that eating a diet that is high in carbohydrates, and is low in fat and protein, than the average. Carbohydrates are important for athletes, because it gives them fuel. Carbohydrates are stored as glycogen in the liver and muscles, and are released slowly during exorcise. It can be broken down easily to give the athlete energy, but in small amounts. The other important element of the diet for athletes is fluids. Water would usually suffice, however for heavy amounts of activity isotonic and hypotonic drinks are useful to help speed up the process of the transportation of water to the bloodstream. 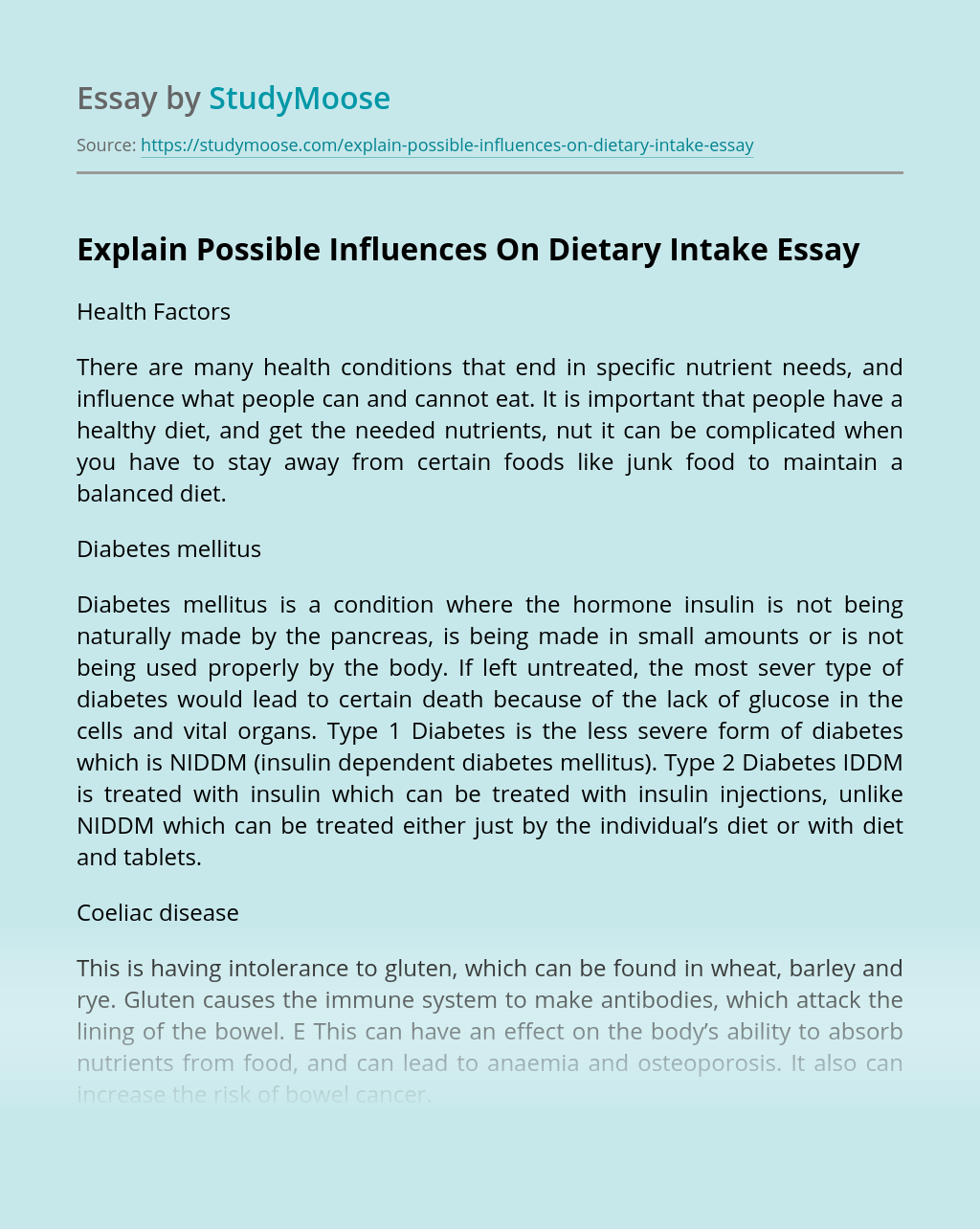