Expansionism in the 19th and early 20th century

Expansionism in the 19th and early 20th century U.S. was not a continuation of past American Expansionism. Throughout American history, prime motives for geographical and political expansion have been in support of U.S. economy. As the country grew, many other issues became important in the shaping of American expansionism. Slavery and investment of capital were major forces behind these issues. All these events involved economic, societal, and political expansion.

Colonial expansion was meant to facilitate growth in population and build economic base to support that population.

Don't use plagiarized sources. Get your custom essay on
“ Expansionism in the 19th and early 20th century ”
Get custom paper
NEW! smart matching with writer

This can be seen in the purpose of the seven years war and war of 1812. Britain and the colonials intended to remove the French from the Americas in order to open up the vast area of land under their control in the west. Between and after these wars, expansion into these newly acquired lands was better made possible with the Northwest Ordinance and removal of Indians. By first attempting to move Indians east of the Mississippi River, land around large rivers would then be open for farming.

This was the purpose of the Northwest Ordinance. It was meant to open up the Ohio River Valley to settlers, most specifically farmers, to increase the production of raw goods that were needed to support America’s growing population. With the eventual purchase of the Louisiana Territory, rivers such as the Mississippi and Ohio became crucial to the development of trade and economy during this period of History.

During the Mid 19th century, expansionist philosophy began to change.

Important societal issues, such as slavery and religion, became a resounding force in every decision. In the 1830s and `840s, the westward movement of people left the valley of the Mississippi behind, stretching far into the west, all the way to the Pacific. A new philosophy, known as Manifest Destiny, came to be a powerful propaganda in this westward movement. His idea, first released in 1845 in United States Magazine and Democratic Review called for “Extending the area of freedom”. Manifest destiny said that America was destined to be a continental nation, that god supported American’ expansion and that new land was needed to make way for population growth.

Using this idea, support from the president and the American people led to the annexation of Texas, and the development of trails that would help spread the American’s to Oregon and California. Incentive for this expansion also came heavily with the slave debate. It had been decided that the Republic of Texas would enter into the Union as a slave state. Abolitionists pressed for expansion to create new states to balance out the slave and Free State power. The purpose of expansion in the mid 1800s was to balance society and fulfill the American’ destiny.

Expansion of the early 20th century was often based on political and economic incentive. The rise of “New Imperialism” and America’s recognition of its own world status led to the conquering of many politically and economically strategic places. After the rise of industrialism, big business looked to invest their capital. Around 1900, the most profitable investments were seemingly overseas. Unfortunately many overseas investments became humanitarian efforts instead. Expansion reached China, Hawaii, the Philippines, the Caribbean, Puerto Rico, the Virgin Islands, and Santo Domingo.

At the end of the Spanish American War it was decided that the victor would get control over the Philippines, Puerto Rico, and other Spanish possessions in the West Indies. Cuba would remain under U.S. control for an indefinite time. Puerto Rico became part of the group of undeveloped countries that American Democracy would try to reform. “All that this country desires is to see the neighboring countries stable, orderly, and prosperous…Chronic wrongdoing…may ultimately require intervention by some civilized nation, and in the Western Hemisphere the adherence of the United States to the Monroe Doctrine may force the U.S…. to the exercise of an international police power.” (Doc F). Laws were passed that pressed that there must be more Americans in the governing body of Puerto Rico than Puerto Ricans, and only those, appointed by the president himself, could be involved in political issues. Puerto Rican government was modeled directly after that of the U.S.

Also, many efforts were made to improve the health, education, and public works of the island. Investors swarmed to the area in search of the sizeable fortunes to be made off of valuable sugar. Instead, with new politics involved, many large plantations were broken up in order to better spread the wealth. There was little economic benefit in expansion of Puerto Rico. These islands as well as the other Caribbean islands were acquired largely because of their military value. American’s also felt some responsibility for the improvement of conditions there. Much of the expansion of the early 1900s was political and humanitarian. Although economic incentive was strong, many economic situations were not profitable for American home economy.

Expansionism in the 19th and early 20th century U.S. was a departure of past American Expansionism. Early expansionism was essential for the economic success of America at that time. Expansion in the mid 1800s was important for America and its development of society and national identity. Later expansion during the early 1900s was derivative of political and economic nature, but often turned to military conquest and humanitarian effort.

Expansionism in the 19th and early 20th century. (2016, Jul 02). Retrieved from https://studymoose.com/expansionism-in-the-19th-and-early-20th-century-essay 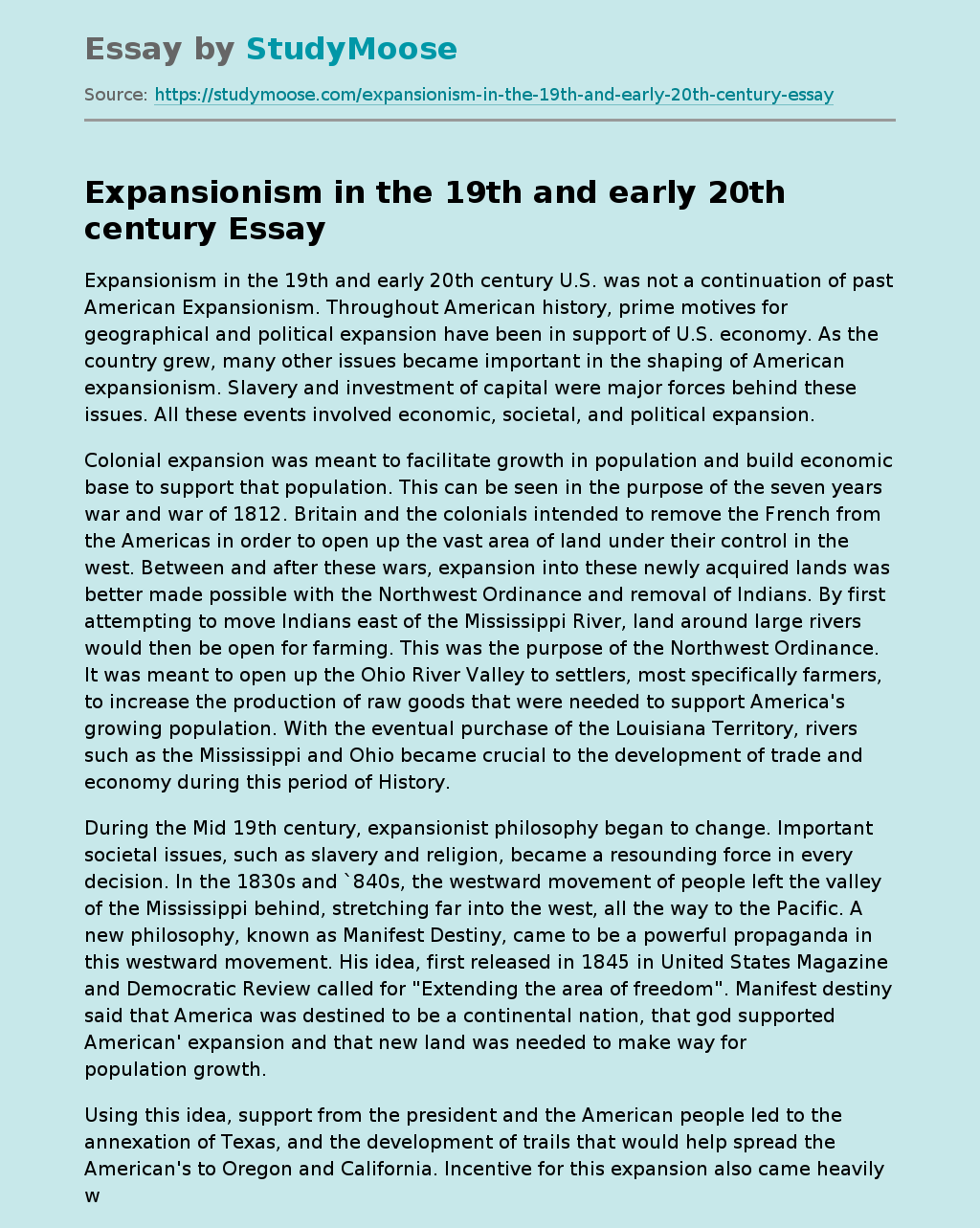