Existentialism vs. Phenomenology and the response to Hegelian Idealism Absolute idealism was a huge part of Western culture but through the nineteenth and twentieth centuries the greatest political movement took place. Marxism was this great political movement. The movement had an affect on theology and art. Jean-Paul Sartre, a continental philosopher who lived in the nineteenth century was an existentialist. Some of the main themes of extentialism are: • Traditional and academic philosophy is sterile and remote from the concerns of real life.

Don't use plagiarized sources. Get your custom essay on
“ Existentialism vs. Phenomenology ”
Get custom paper
NEW! smart matching with writer

• Philosophy must focus on the individual in her or his confrontation with the world.

• The world is irrational (or, in any event, beyond total comprehending or accurate conceptualizing through philosophy). • The world is absurd, in the sense that no ultimate explanation can be given for why it is the way it is. • Senselessness, emptiness, triviality, separation, and inability to communicate pervade human existence, giving birth to anxiety, dread, self-doubt, and despair. • The individual confronts, as the most important fact of human existence, the necessity to choose how he or she is to live within this absurd and irrational world.

The extentialist believed that there was no answer to the existential predicament. They say life can only deteriorate and without struggling through life a person can find no meaning or value to the life they lead. Some of these themes had already been introduce before Jean-Paul Sartre came up the additions. The philosophers, Arthur Schopenhauer, Soren Kierkegaard, and Friedrich Nietzsche were the contributors to these themes. All three had a strong distaste for the optimistic idealism of Georg Wilhelm Friedrich Hegel and for metaphysical systems in general.

Such philosophy, they thought, ignored the human predicament. For all three the universe, including its human inhabitants, is seldom rational, and philosophical systems that seek to make everything seem rational are just futile attempts to overcome pessimism and despair. Soren Keirkegaard’s fundamental question in life was is there anything in this world or outside it to which the individual can cling to keep from being swept away by the dark tides of despair? He was as almost entirely concerned with how and what the individual actually chooses in the face of doubt and uncertainty.

He thought the only way to be grated relief from despair was to have a total commitment to God. Friedrich Nietzsche was convinced that the world was run by a cosmic force and that it is driven by will to power or will power. This way of thinking was quite different from Keirkegarrd. Nietsche believed you had to control your own destiny and seize what was yours. He led a more exciting life, a more passionate one. Keirkegaard was very depressed and spent most of his life battling despair but found comfort in God.

Nietzsche used to say “Which is it, is man one of God’s blunders or is God one of man’s? ” While both of these men had different views from each other they agreed to disagree with extentialism. Existentialism as a philosophical movement was something of a direct reaction to perceived social ills and was embraced by artists and writers as much as by philosophers So it is not surprising that two of the greatest existentialist philosophers, Albert Camus and Jean-Paul Sartre, wrote drama, novels, and political tracts as well as philosophical works.

Phenomenology interests itself in the essential structures found within the stream of conscious experience—the stream of phenomena—as these structures manifest themselves independently of the assumptions and presuppositions of science. (Moore-Bruder, 2005) Phenomenology, much more than existentialism, has been a product of philosophers rather than of artists and writers. But like existentialism, phenomenology has had enormous impact outside philosophical circles. It has been especially influential in theology, the social and political sciences, and psychology and psychoanalysis.

Phenomena is the distinction between the way something is immediately experienced and the way it “is. ” Both Hegel and Kant were philosophers of Phenomenology. Also, Edmund Husserl and Martin Heidegger were phenomenologists. Husserl introduced transcendental phenomenology, whose purpose it was to investigate phenomena To investigate phenomena in this way is to “bracket” or “exclude” one’s presupposition about the existence or nature of an “external” or “physical” or “objective” world. Husserl called this process phenomenological reduction without making any assumptions about the world.

Heidegger, too, was convinced that it was necessary to look at things with fresh eyes, unshrouded by the presuppositions of the present and past. According to Heidegger, we are basically ignorant about the thing that matters most: the true nature of Being. It is usually with reference to his earlier work that Heidegger is sometimes called an existentialist. Heidegger himself resisted this appellation. Yet he was very much influenced by Kierkegaard and Nietzsche, and the concern expressed in his early works with such existentialist themes as fear, dread, meaninglessness, and death is quite evident.

Sartre studied in Germany for a brief time in the 1930s and was influenced by Heidegger. Sartre attributed the concept of abandonment to Heidegger, and Sartre and Heidegger both were concerned with the concepts of bad faith, authenticity, a life’s project, and others. In philosophy it is true that each view even if they are opposing influence one another. In the last third of the twentieth century, diverse Continental voices were raised against what they saw as suspicious assumptions about the meaning of right and wrong, the nature of language, and the very possibility of human self-understanding.

Some Continental philosophers have been suspicious about Western metaphysical systems that they claim lead to the manipulation of nature or that set up a certain ethnic or cultural perspective as absolute truth. As the years go by new philosophers try to prove the others wrong and so is the development of philosophy always on going. Reference Moore-Bruder. 2005. Metaphysics and Epistemology: Existence and Knowledge: The Continental Tradition. The Power of Ideas, Sixth Edition. Mc-Graw Hill. 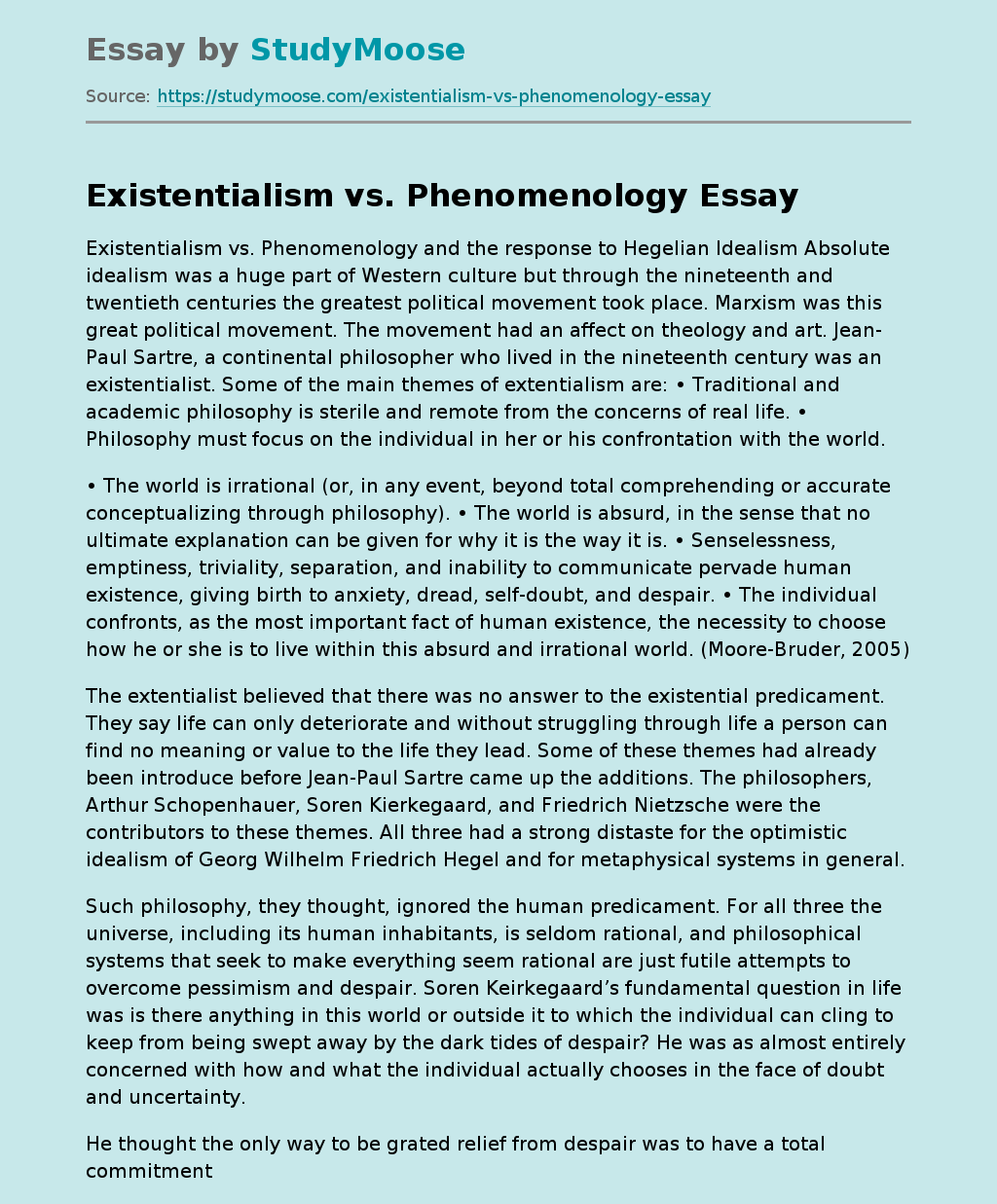