Existentialism of Kierkegaard and Sartre Philosophy

“Is live worth living? That depends on the liver,” is quite an anonymous, but knowledgeable, quote. Though this may seem a more modern way of viewing life itself, this quote actually resembles that of a much older perspective: that of an existentialist. Existentialism, is, essentially, the philosophy that life is meaningless, unless one defines that life. Two philosophers actively involved in this position were Soren Kierkegaard and Jean-Paul Sartre. While both can be considered existentialists, in that the quote above encompasses much of their beliefs, both of these men have significant differences in the way in which they view all fields of philosophy (metaphysics, epistemology, and axiology).

Don't use plagiarized sources. Get your custom essay on
“ Existentialism of Kierkegaard and Sartre Philosophy ”
Get custom paper
NEW! smart matching with writer

However, though I am not personally an existentialist, my life in terms of existentialism has been influenced by both Kierkegaard and Sartre, despite their discrepancies.

One major difference between the two is that Sartre is an atheist. This metaphysical position is the basis for many of Sartre’s existentialist opinions on other aspects of philosophy.

With this active role in life, each person retains an individual burden which affects all others. Sartre wrote, “Man is condemned to be free; because once thrown into the world, he is responsible for everything he does,” and “Our responsibility is much greater than we might have supposed, because it involves all mankind.” Both of these quotes reflect this aspect of liberty and consequence which one faces.

In contrast to Sartre’s atheism, Kierkegaard believed in God, and believed that a person’s relationship with God helped reveal and determine his/her life. Kierkegaard’s belief contained a “leap of faith” in God, because of an “objective uncertainty.” This was from the lack of hard proof of a God, and a lack of knowing God in an objective sense. This led Kierkegaard to believe that faith must involve inwardness; thus, the “leap” one must take in order to fully believe in, and live a relationship with, God.

Another subdivision of Kierkegaard’s objective uncertainty dealt directly with his epistemology, in truth. He wrote “Truth is subjectivity,” meaning an individual has its own final determinant in what is really real. The process of reaching this final determinant, for him, was to Exist: “… Do not think as a thinker… think as a living, real being… think as Existence.” This is meant for a person to be an actor in life, instead of a spectator, and to think personally, consciously, and subjectively, as aforementioned. This is similar to Sartre’s opinion of independence and liberty in life. However, the view of human nature is blurred, as being subjective focuses on differences in existence: “…The task of the subjective thinker is to transform himself into an instrument that clearly and definitely expresses in existence whatever is essentially human.” Note that “whatever is essentially human” is not defined; it is left open for interpretation.

Sartre, though he is not quite as detailed as Kierkegaard, does have a similarity in the aspect of Existing. For him, there are three types of being: “L’être-en-soi (‘being-in-itself’), “L’être-pour soi (‘being-for-itself”)”, and “L’être-pour-autrui (‘being-for-others’).” All things that are, have being, but that being is only in-itself, and the being is totally self-contained and static, or inanimate. Existing is the process of progression and change, whereas being is merely a static state. Sartre’s existence is the process in which something “becomes what it will be,” which is not unlike Kierkegaard’s Existence and actualization.

Sartre and Kierkegaard do not have many differences, for they are both existentialists and share many of the same broad views. I, in turn, share some of these concepts, and try to apply them to my own life. In terms of Sartre, because I am not an atheist, I believe that there is such a thing as human nature; however, I believe that we are “condemned to freedom.” Although each person may have mutual attributes with the next, the fact that we exist in completely separate lives with completely separate experiences gives us the liberty and responsibility that Sartre mentioned. Keeping this in mind, my individual responsibility grows, as I take into consideration the effect and consequences that my decisions may have. In addition, Sartre’s variance of existence, in “becoming,” makes sense to me, because I am of the opinion that existing requires changing, progressing, and living to one’s potential, and not being static and self-contained. In the same way, Kierkegaard’s actualization process of Existing is also in my favor, as I am determined to be an actor, in place of a spectator, in life.

I agree with existentialism in a broader sense, in that the fact that I exist precedes who I am. I was not born with the characteristics which I have now, nor with the values and beliefs which I have acquired since birth. I differ, however, in opinion, in that I am not the sole determinant of my future, that there are some things which I will not be able to change in my life, such as human nature and my genetic makeup. Nonetheless, after examining existentialism, I have come to the conclusion that it is a valid view on life itself, and what life means.

The meaning of life is determined by its own liver, and this idea encompasses much of the philosophy of existentialism. Jean-Paul Sartre and Soren Kierkegaard both partake in this approach. Significant differences exist in many of the details, but many of these conceptions correlate with one another, and embody that philosophy. After having a more in-depth perspective, I have both agreed and disagreed on some of the aspects. However, I acknowledge and praise both the similarities and differences in opinions in not only Sartre and Kierkegaard, but in all aspects of life. For they are an indication of uniqueness, by being able to have independence and responsibility, by being able to Exist, to be actualized, to have existence precede essence, and to determine the meaning of life on one’s own.

Existentialism of Kierkegaard and Sartre Philosophy. (2016, Jun 21). Retrieved from https://studymoose.com/existentialism-of-kierkegaard-and-sartre-philosophy-essay 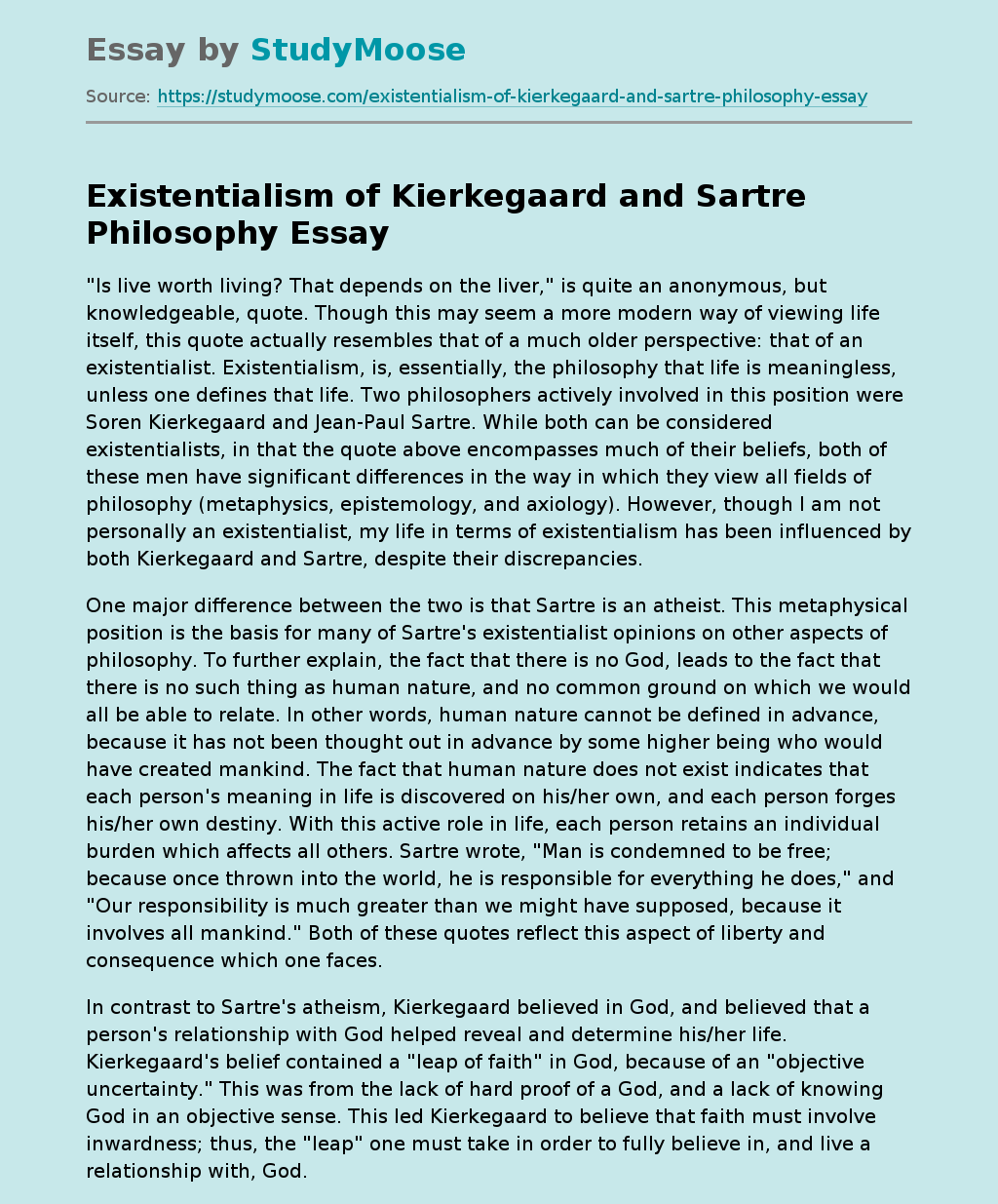