Existentialism in Demian and Crime and Punishment

Existentialism is fairly common in literature, despite being a relatively new school of thought, and both Demian and Crime and Punishment show existentialist traits. This gives each book not just a philosophy, but also a certain feeling and mindset. Existentialism starts that with the idea that existence precedes essence, or purpose. We come into this world without a purpose, and we simply exist. Our task is to find a purpose. The world around us is an alien chaos, a circus that we stumble through, trying to find a meaning for our life.

Don't use plagiarized sources. Get your custom essay on
“ Existentialism in Demian and Crime and Punishment ”
Get custom paper
NEW! smart matching with writer

In Demian, it is clear that Sinclair does not know his purpose.

His struggle is to find out what it is. Jean-Paul Sartre says, “Life has no meaning a priori? it’s up to you to give it a meaning. ” Hesse declares that “[e]ach man had only one genuine vocation? to find the way to himself?. His task was to discover his own destiny” (Hesse, 132). It is clear, then, that we come into the world with nothing, no purpose at all.

Proficient in: Crime And Punishment

The only genuine task we have is to figure out what we are going to do here. According to Existentialism, no one can find it for you, and, similarly, no doctrine or philosophy can find it for you. Sinclair learns these same lessons.

Demian pulls Sinclair away from mainstream religion early in the story, saying that the division of good and evil has no real meaning. Later, Pistorius tries to teach Sinclair about myriad past religions, but Sinclair rejects him, feeling that he should try to come up with something original instead.

Throughout the story, Sinclair engages in different mentor-pupil relationships (like his relationships with Demian and Pistorius) but eventually he shrugs those off, taking his friends’ wisdom with him and facing the world alone. That is what everyone must do, eventually?

face the world alone. And alone is exactly how we feel, as we stumble through this circus of a world. Sinclair spends most of his time not just feeling but also being by himself, adrift. When he leaves his family and his sisters, it does not affect him much, if at all, he is so isolated. He connects only with a precious few people, and never for very long. He somehow distances himself from his peers. Even when he was partying and drinking a lot, he found a way to separate himself from them. In that case, it was the role of sex in his life. Demian is a story about one man’s journey.

The reader never really learns the story of any other character, not even Demian himself, who remains something of an enigma to the very end. This puts the story in an existentialist mindset. Sinclair is drifting through a swirling, gray mass of humanity. Alone is also how we must act. Jean-Paul Sartre says, “It is only in our decisions that we are important,” and, “We must act out passions before we can feel it. ” This pretty closely mirrors the sentiment presented when Pistorius says, “[Y]ou can’t consider prohibited anything that the soul desires” (Hesse, 116).

It is only when we make our own decisions and act for ourselves that what we do has meaning. Hesse puts the existentialist framework to work for him by using it to highlight the need for independence and spiritual self-reliance. Dostoyevsky, on the other hand, uses the mindset to facilitate Raskolnikov’s downward mental spiral, highlight his aloofness, and pull the story along. The world of St. Petersburg is, without a doubt, a strange and hostile place for Raskolnikov. He stumbles along and things constantly happen around him. He repeatedly wakes up with people in his room.

He sees things in the street, such as the drunken rape victim early in the story, or a prone Marmeladov, that cause him to lose his cool. More and more, he finds himself doing crazy things without regard for logic or even common sense. People in this world confound him. He has no idea what they are up to, and he is constantly paranoid that people are plotting against him. His guilty, delirious inner world combines with the crazy, chaotic outer world to make Raskolnikov into a raging, feverish, maniac. He is not just any raging, feverish, maniac, though. He is an aloof raging, feverish, maniac.

He considers himself better than those around him, and his superior mentality drives his antisocial behavior. His antisocial behavior, in turn, gives the character and story a feeling of being alone. Not only is the world crazy, but also Raskolnikov is separated from it and everyone in it, at least until the very end of the book. He is isolated, so much so that at times he can “feel it clearly with every fiber of his being that he could never again address these people” (Dostoyevsky, 122). Finally, Dostoyevsky uses this chaotic world to drive his story along.

Things are constantly happening by coincidence, and Dostoyevsky moves the plot forwards at a dizzying pace, forcing Raskolnikov to act. It is fantastic that Raskolnikov should happen upon Marmeladov soon after he is injured, and that Raskolnikov should overhear people discussing the very same murder that is on his mind, and that someone should eavesdrop on him and hear his confession. The frenzied plot makes it much easier for both Raskolnikov and the reader to slip into a mania, which is surely Dostoyevsky’s aim. The philosophy of existentialism, too, plays a part in Crime and Punishment.

Sartre says that the only true goal of our lives is that which we set for ourselves. Raskolnikov, through the main portion of the story, has no clear goal. He wavers between wanting to turn himself in and trying to avoid suspicion. Sartre says, “Man can will nothing unless he has first understood that [he has] no other aim than the one he sets himself,” and it is clear that Raskolnikov’s will is pretty much useless. He can effect no real change in either himself or in his surroundings until he finally picks a goal and follows through with it.

His personal development is completely halted during his entire spell of indecision. Only in the epilogue do we see him begin to change, begin to forsake his philosophy of the superman, find happiness, and fall in love. The philosophy of existentialism was around long before anyone gave a name to it, as is evidenced by Dostoyevsky’s St. Petersburg, the perfect example of an existentialist world. Both Dostoyevsky and Hesse use existentialist ideas help them express their points. Andrew Holbrook, 2006.

Existentialism in Demian and Crime and Punishment. (2016, Nov 09). Retrieved from http://studymoose.com/existentialism-in-demian-and-crime-and-punishment-essay 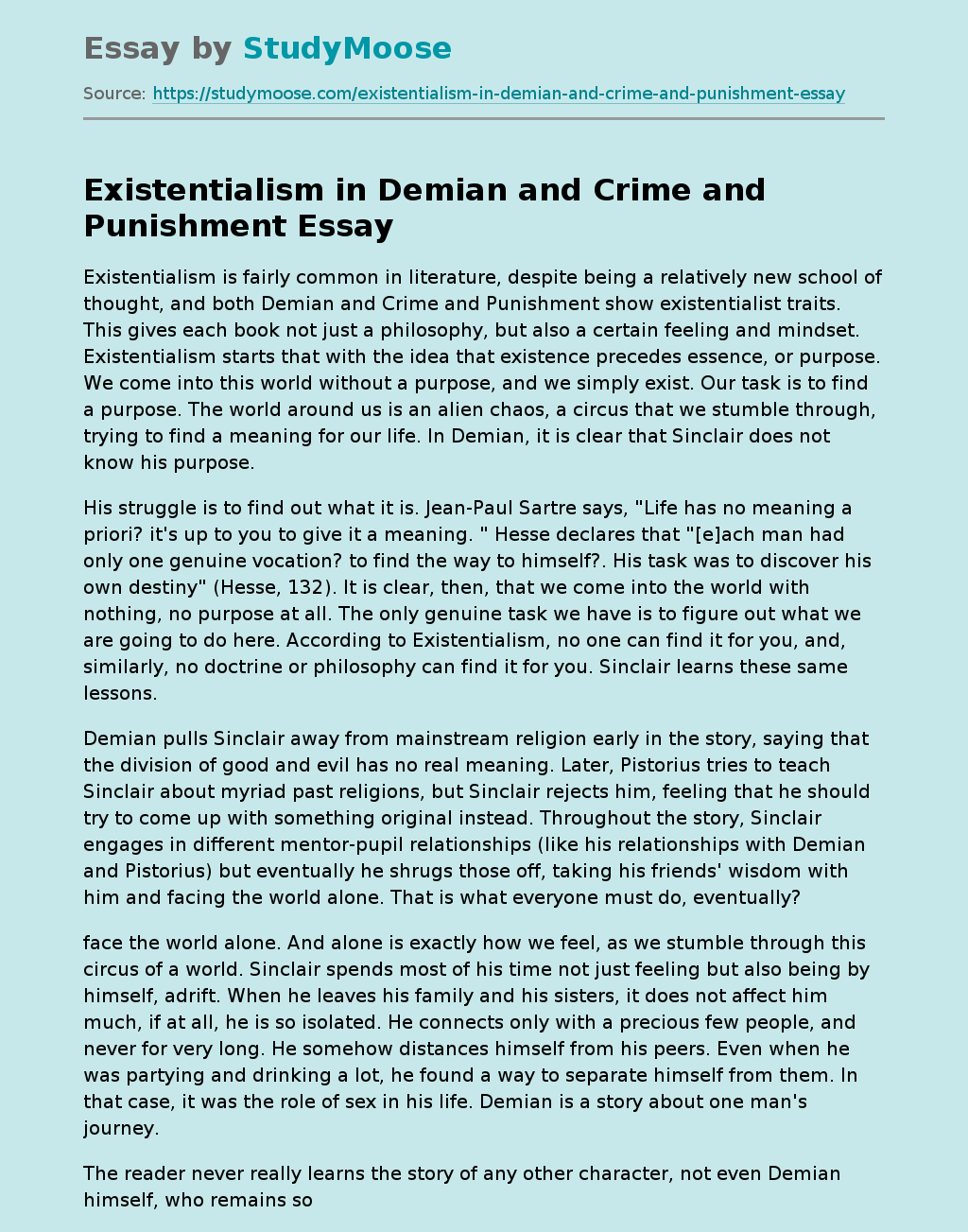