In every aspect of an environment, there is a variance in the concentration of fluids present in the environment and the bodies of organisms. Osmoregulation is the regulation of water and ion concentrations in the body. Keeping this regulation precise is critical in maintaining life in a cell. Balance of water and ions is partly linked to excretion, the removal of metabolic wastes from the body. An animal’s nitrogenous wastes reflect its phylogeny and habitat Introduction:

Osmoregulation is the control of water content and the concentration of salts in the body of an animal.

Don't use plagiarized sources.
Get Your Custom Essay on Excretion and Osmoregulation Just from $13,9/Page

In freshwater species osmoregulation must counteract the tendency for water to pass into the animal by osmosis. Various methods have been developed to eliminate the excess such as contractile vacuoles in protozoans and kidneys in freshwater fish. Marine vertebrates have the opposite problem; these species prevent excessive water loss and enhance the excretion of salts with short tubules. In terrestrial vertebrates the dangers of desiccation are reduced by the presence of long renal tubules that increase the reabsorption of water and salts.

Moreover, an osmoregulator is referred to as the state when body fluids whose concentration is different from that of their environment, so these organisms use up a lot of energy in having to control and gain water. An osmoconformer, is when body fluids with a solute concentration is equal to that of seawater. Furthermore, this report aims to identify the osmoregulator and the osmoconformer of the given species as well as to compare the specific gravity of each body fluid. Materials:

Results:
Notes:
The Malpighian tubules function as an excretory system and aid in osmoregulation. The tubules empty into the alimentary canal, and remove nitrogenous wastes from the insect’s body. These structures were named for an Italian anatomist named Marcello Malpighi, who discovered the tubules in the seventeenth century. In Earthworm (pheretima posthuma), the excretory system is performed by segmentally arranged, microscopic, coiled, glandular & vascular & complicated excretory tubes, called as Nephridia. The Nephridia are found in all segment of the body of earthworm except the first 2 or 3 segment. According to the position & structure of Nephridia in the body, 3 types of Nephridia are found: Septal Nephridia, Pharyngeal Nephridiam and Integumentary Nephridia. The contractile vacuole controls the amount of water in paramecium.

Figure 2.0
Discussion:
Figure 1.0 displays the graph of specific gravity against concentration for P. lurca and U. coarctata. From the Figure 1.0 it can be seen that P. lurca is an osmoconformer in that the body fluid is equal to the concentration of seawater. Moreover, this means that the body fluid (internal fluid) is the same concentration as that of its surroundings. On the other hand, U. coarctata is depicted in the graph as seen by the plot as an osmoregulator. So, the body fluid has a solute concentration that is different from its surroundings. These suggest and confirm that the hypothesis is correct and it is quite evident as obtained in the results and graph plotted. Similarly, the body fluids collected (extracellular fluids) are known to be denser than water itself. To add on, the dissections of the various arthropods which included the cockroach, sipunculid and also the annelid, the earthworm. Earthworms and sipunculids have structures called nephridia for excretion, whilst cockroaches have malphigian tubules for excretion. Conclusion

In conclusion, in determining which organism was the osmoregulator and osmoconformer various other structures of numerous arthropods were also studied and analyzed. The hypotheses was indeed proven correct, as the P.lurca is the osmoconformer and U.coarctata is the osmoregulator. Osmoregulation is an important process in any animal as it assists in maintaining stable internal conditions in terms of water content and the concentration of ion soluble contents in any given body. Furthermore, as predicted by obtaining specific gravity would indeed determine the two types of osmoregulation, the organisms P.lurca and U.coarctata displayed different specific gravities that contributed in the decision. Hence, to reiterate, osmoregulation is a vital process that enables an animal’s survival as well as it contributing to the environment.

Excretion and Osmoregulation. (2016, May 12). Retrieved from https://studymoose.com/excretion-and-osmoregulation-essay 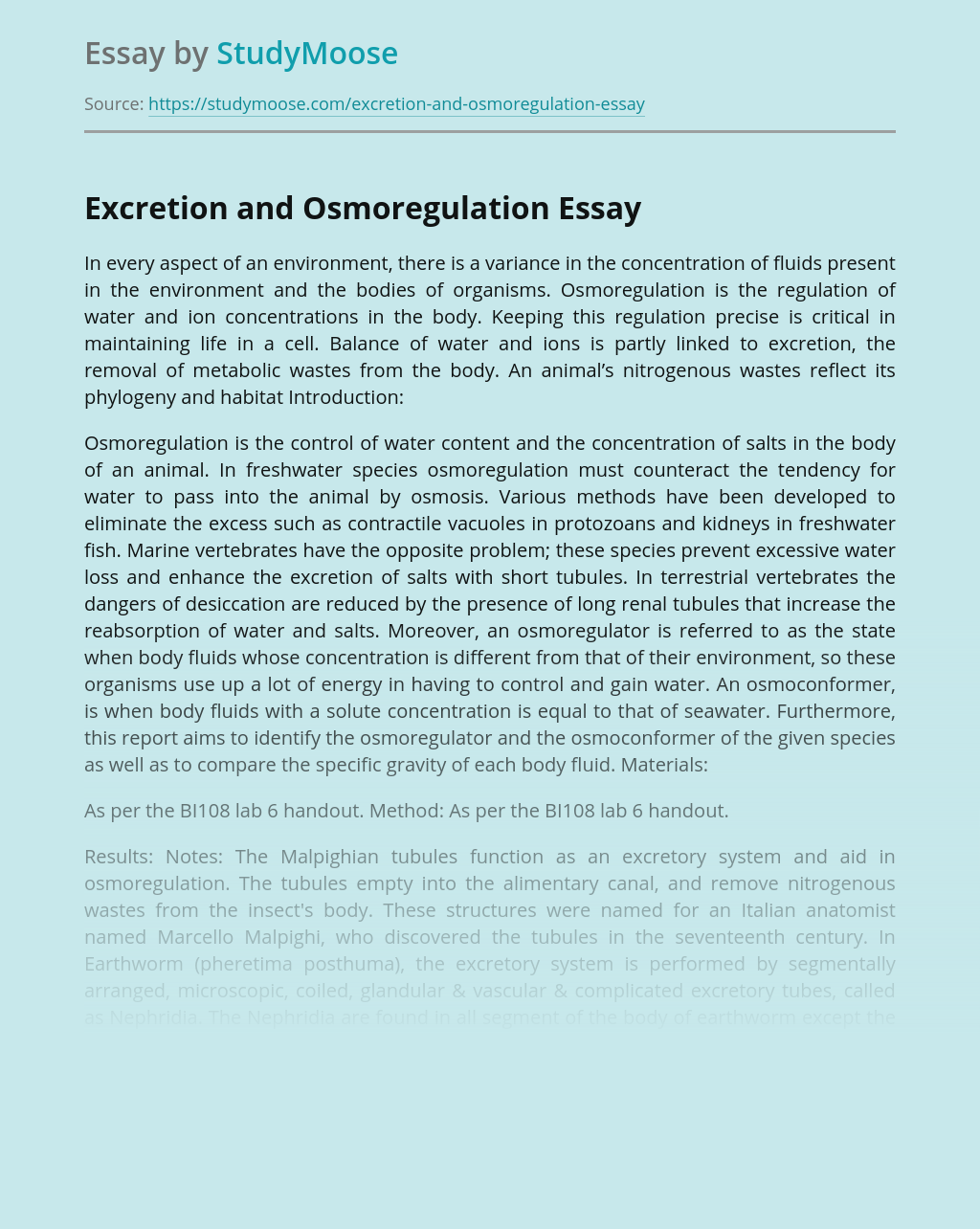 Introduction: This landmark case seeks to break the risk-reward trade off involved in calculating Capital Cost. The object of the solution must be to minimize project risks while maximizing project opportunities available. We want a rate and a rating system that does not unnecessarily reject “the best available projects – i.e. highest net positive free...

View sample
PEST Analysis for a Company in the Tourism Industry

In “Mother Tongue” by Amy Tan, Tan explores the connection between one’s language and their identity, she examines not only how language affects the development of ones identity, but also the role it has in the way one is perceived by society. Tan shares a few anecdotes illustrating the role language played in shaping her...

In the past few months, the fast-food restaurant chains have taken jabs at each other, offering similar dishes, matching prices and opening restaurants in close proximity. KFC, which primarily serves chicken, has taken aim at its burger rival with some of its own burgers called Zingers. For customers who prefer chicken inside buns, there is...

i think india in 2030 will be very popular place for its historical and mysterical things that can amze any scientist,historian,archeologist,geographers NEW DELHI: India will be world’s third largest economy by 2030 but its energy demand will slow down to 4.5 per cent, global energy giant BP plc (one of the world’s leading international oil...