Exclusion Clauses Essays Business Law Word Count: 1950 Exclusion Clauses Essay Exemption clauses are an agreement in a contract which helps the party to have limited or to exclude liability. It can be used unfairly which makes it a disadvantage to other partys which is why there are laws in place to limit the use of clauses and to make it fair. Mr. Torres has been using Greased Lightening for five years this time he placed a different order and at the same time the contract arrived late as well as that there were new terms stated in the contract now I will find out whether the clauses are valid explain them and any possible remedies.

Don't use plagiarized sources. Get your custom essay on
“ Exclusion Clauses Essays ”
Get custom paper
NEW! smart matching with writer

According to Lord Fraser he said when exclusion clauses are made that exclude liability will be dealt with strictly as ‘these principles are not applicable in their full rigour when considering the effect of clauses merely limiting liability’ this was represented in (Ailsa Craig Fishing v Malvern (1983)) case.

Therefore moving back to Mr. Torres case will be dealt with attention since it is excluding liability. If Greased Lightening exclusion clause was clear and unambiguous then it wouldn’t been an application of the contra proferentum rule.

However, in my opinion it does seems ambiguous and unclear reason being notice arrived two days later than usual and the clause was written in small and pale gray text therefore it seems uncertain. All clauses need to satisfy the Unfair Contra Terms Act (1977) and pass the test of reasonableness There are three types of incorporation of clauses one being by signature other being by notice and finally incorporation by a consistent and frequent course of dealings.

In this case clause has been incorporated as a term in the contract using consistent and frequent course of dealings.

For the term to be incorporated the party in this case, Greased Lightning need to give reasonable time to Mr. Torres. Incorporation by signature occur when a party signs a document then they are bound by the terms and clauses in that document. Incorporation by Notice is when a notice if given in reasonable notice only then the notice will be acceptable and there is no requirement for an actual notice of terms. A clause doesn’t have any requirements to have it implemented it just needs to be made aware to the third party giving them reasonable notice. If the clause was incorporated into the contract it doesn’t mean it will be effective.

The law is there to restrict parties that are vulnerable. Parties are protected through judicial control the common law. Contra proferentum rule is the judicial approach. Contra proferentum is where there is uncertainty in the wording of exclusion clauses and to back that up Mr. Torres was sent a letter saying new terms however the new terms were written very small and in faint gray writing which makes it ambiguous it appears to be. It seems like Mr. Torres goods had been damaged at the same time Green Lightening sent out the new documents reason to its late arrival and then informed Mr.

Torres about the goods to help save guard them self’s of not paying for the damages which is a possible reason. Unfair Contract Act deal with business to consumer contracts as well as business to business contracts. They are very similar. Under the unfair contract Act 1977(UCTA) transaction between firms are covered by UCTA, However UCTA have restrictions in place one being the test of reasonableness looking at Mr. Torres case it seems like Mr. Torres didn’t have and bargain power meaning had no chance to negotiate better terms and am sure he would therefore under this act Greased lightening will be liable.

Most importantly it was negligence of the driver. In the case of (Phillips Products Ltd v Hyland (1987)) the court found that it was negligence of the driver therefore the clause wasn’t taken into account. Similar with Greased lightening it was negligence of the driver and the contract arrived late with no negotiation terms therefore it must satisfy the test of reasonableness. This applies for all contracts and not just business contracts. Main provisions of Unfair Contract Act (UCTA) are that it voids exclusion lauses that attempt to restrict negligence liability for personal injury and death. It also voids any clauses that attempt to restrict negligence liability for loss or damage unless shown reasonable. Reasonableness will be assessed. The reasonable criterion will act in favor of those who are relatively week at bargain power. Unfair Contract Act has a test of reasonableness which looks at the time of the contract what information was available, weather the contract has been negotiated or was it standard from and whether the purchaser has powers to negotiate better terms. Putting Mr.

Torres case in the test of reasonableness, firstly at the time of the contract the usual standard contract was formed and no exclusion clauses were mentioned therefore that left Mr. Torres without bargaining power to negotiate better terms as he was unaware of the new terms and had trusted Greased lightning. Also the contract hadn’t been signed and the exclusion clause notice arrived two days later which void it as it will be deemed as late and invalid in the case. Section 1(3) says that the Act applies when businesses seek to exclude or limit liability, therefore the Act clearly applies to Greased Lightening clause.

In the test of reasonableness the timing of the notice will be considered and for it to be effective should be given at the time of the notice or before otherwise it’s too late. This was shown in (Olley v Marlborough Court Hotel (1949) and (Thornton v Shoe Lane Parking(1971)). In relevant to the present question Mr. Torres place an order at the time the contract was set up however the notice arrived two days later this would mean that the exclusion cause will be determined late so it’s not part of the contract therefore Greased Lightening will be liable. However, has MR.

Torres and Greased lightening have previously been dealing with each other courts can interfere if a contract is different from previous dealings. As the notice arrived two days later than usual but in the notice it said refer to “standard terms and conditions”, which say- “We will not be liable for any damage caused by the negligence of our staff. ” This could possibly mean Mr. Torres contract has been changed it might have been amended doest say what but it means that Mr. Torres has been reading its contract. In the case of (Spurling v Bradshaw (1956)) was similar as the defendant hadn’t read his contracts similarly Mr.

Torres has read his contract and now is suing Greased lightening on the basis of liability. In the Case it doesn’t state whether the contract was signed therefore it could mean a contract doesn’t exist at all therefore no case will be there. However it also says it arrived two days after which in this case it could mean the Postal Rule applies. At the time of posting the offer is accepted. It doesn’t say when the order was placed. As previously mentioned there is no mention of a contracting being signed therefore it is very important for the party to bring in a notice of exemption.

In (Parker v South Eastern Railway Company (1930)) in this case there was no contract in place but the claimant was given a ticket with a limitation clause on it merely giving a ticket dosent make reasonable time according the courts was also in the case in (Chapelon v Barry UDC (1940)). Similar with Mr. Torres simply giving a notice of exclusion clauses makes it invalid has Greased lightening have to show that reasonable steps were taken in time to bring the notice to the attention of Mr. Torres. As Greased lightening were a supplier of shin pads to Mr.

Torres and its clauses wasn’t reasonable in my opinion Mr. Torres would be entitled under sales of goods act to reject them and recover money from the other side in this case greased lightning. If Mr. Torres does win the case it must show losses it faced and was a breach of contract on Greased lightening side. In (Hadley v Baxendale (1865)) Baxendale held up production for Hadley for a week to replace a damaged item and therefore Hadley suffered losses in the end the court divided the recoverable damaged into two categories Normal losses and abnormal losses.

Differences between the two are that normal losses are losses occurred but no due to breach of contract. In this case Mr. Torres would be abnormal losses as Greased lightening have breached the contract and would be liable to cover the costs to replace and deliver all shin pads to MR. Torres. Finally, in my opinion there is a case and Greased Lightening is liable to replace shin pads and cover loses if any faced by Mr. Torres. Exclusion clauses are invalid as at the time of the contract there was no mention of this and it will be deemed too late. Bibliography: Ailsa Craig Fishing v Malvern (1983) 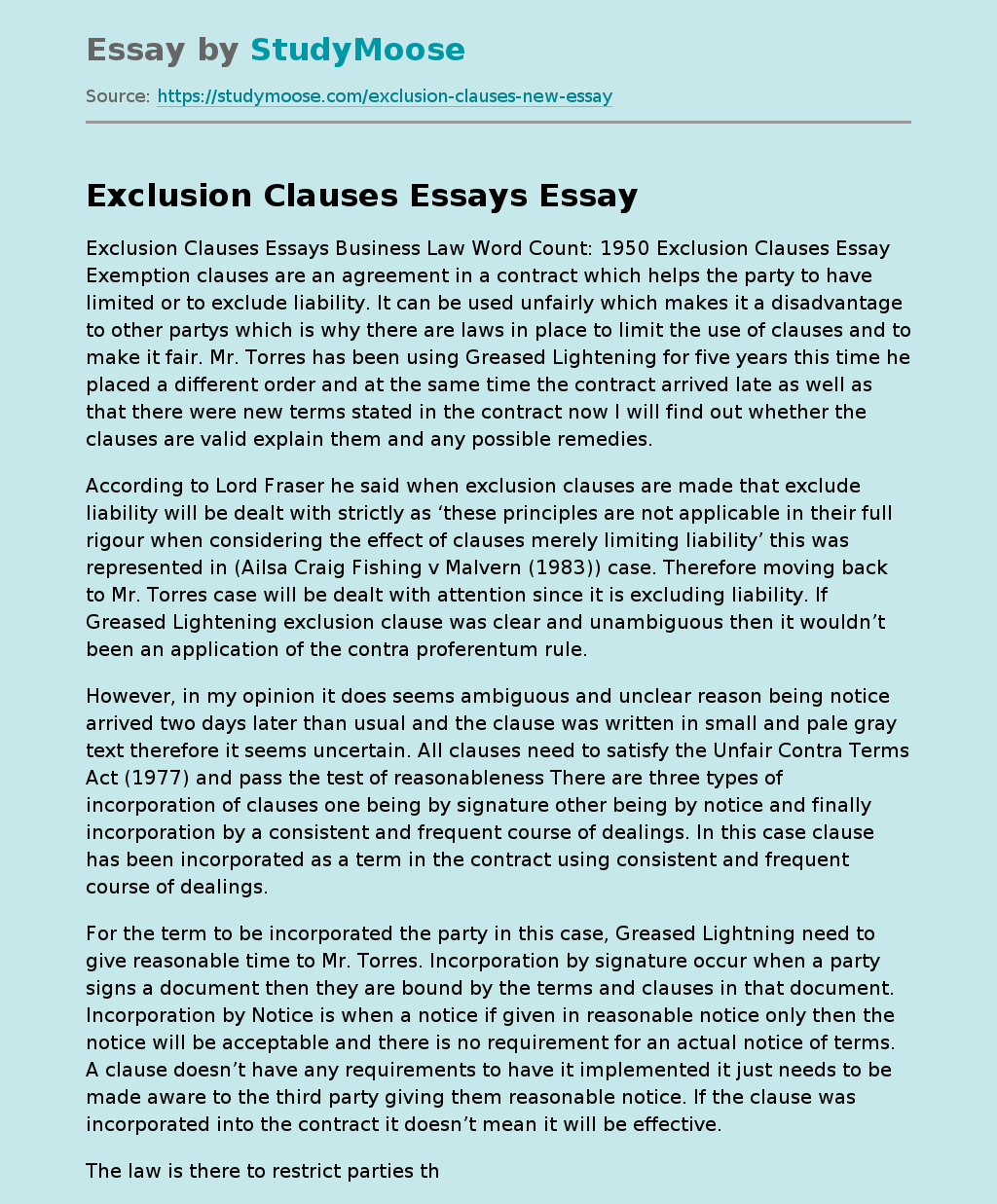