Examples of people of the world leader-Machiavellian

Vladimir Vladimirovich Putin is a great example of a leader who fits Machiavelli’s ideas of a good leader. He has managed to stay in power even when not publically in power. He is the former president and the former prime minister of Russia, and as Andrew Park states in “Russia’s Vladimir Putin mimics Machiavelli’s ‘The Prince’”, “…everybody tacitly agrees the incumbent prime minister of Russia, Dmitry Medvedev, is a puppet of Putin’s.”

He also shows himself in public as masculine.

Don't use plagiarized sources. Get your custom essay on
“ Examples of people of the world leader-Machiavellian ”
Get custom paper
NEW! smart matching with writer

He shows himself using firearms, holding animals that has hunted, and performing martial arts. He also had a 65% or more approval rating throughout his times as a leader. Along with displaying himself as masculine, he also seeks to return Russia to its Cold War pride. He even demonstrates directly one of Machiavelli’s principles, which is of the fox and the lion. This principle states that you must have the cunning skills of the fox, and the power and fear striking of the lion.

During the events of Crimea, Putin waited until it was necessary to act such as the fox, and when he acted, he acted with such measures that resolved the conflict without need for total war, such as the lion. While these events were occuring, the 2014 Olympics were also going on. Putin managed to handle the problems at Crimea, and also support his country’s athletes and fans. This goes with Machiavelli’s ideas of remaining popular with your people to be a good ruler.

In conclusion, Putin is a very good example of a Machiavellian leader. He rules by some of the same principles as discussed in Machiavelli’s ‘The Prince’.

Donald Trump is another very good example of a Machiavellian world leader. As being our president here in the United States of America, Donald Trump has to be a representative of our country. We would not want a bad leader to be representing the United States. Though he is not necessarily the best leader, he is not a bad one. Instead, he is somewhat of a Machiavellian leader. He is considered by some to be a harsh and unforgiving person, which makes for a good leader in Machiavelli’s eyes.

Like Machiavelli, Donald Trump defies and mocks political correctness and rules with the knowledge of the true nature of people. Also, despite what some may think about him, he has managed gain popularity with the majority of the United States of America. How else was he voted for president? With the question of whether it is better to be loved or feared, Machiavelli failed to think about the fact that there will always be a group of people who love a leader even if the majority fears him.

There is also the possibility that said leader is loved and feared. In the case of Donald Trump, the majority of United States citizens do not love him or fear him directly, but many people fear what he might get the United States into. He is a very forward speaking person, and likes to get into arguments which could result in country feuds or even war. Despite some of his anti-Machiavelli aspects, I think that the United States of America president, Donald Trump, is a Machiavellian leader.

Chinese president, Xi Jinping, is another great candidate for my roster of Machiavellian leaders. The amazing thing about this particular leader is that he is actually the permanent( for the moment anyway) president of his country, China. This makes him almost the most relatable to Machiavelli’s ‘The Prince’ when compared to the other leaders I have chosen. Xi Jinping has managed to gain more power than any president in China since 1976; no simple task. Xi Jinping has control over the military, the Chinese Communist Party (CCP), and all-important political parties.

With this power, he has strengthened the Chinese Communist Party (CCP). He has also eliminated his enemies and rivals, and has started paving the way for a new beginning for China. This, in turn, has led China down a path of becoming the new “World Super-Power” if Xi Jinping keeps up his current endeavors in Chinese reformation. Xi Jinping demonstrates well the skills of the lion and the fox. As stated by Machiavelli in excerpt eight, “One needs….. to be a lion to frighten away wolves.” Xi Jinping demonstrates this skill well for, as I stated earlier, he has eliminated his rivals one after another to pave a way toward Chinese reformation. Also stated by Machiavelli in excerpt eight, “One needs, then, to be a fox to recognize traps…”

This trait is almost instinctive to Jinping as he has experienced from a young age the unpredictability of the government body. In conclusion, Xi Jinping is a great example of a modern Machiavellian ruler. He may even be considered the best example.

Hosni Mubarak, the president of Egypt from 1981 to 2011, can be considered the most prominent modern Machiavellian leaders from Africa. His term of presidential leadership would have lasted longer if it were not for the popular unrest in Egypt at the time which forced him to resign from his position as president of Egypt.

He helped create peace treaties between the United States of America and Israel to avoid conflict with extremist Muslims. He also smartly avoided conflict with the United States of America during the United States invasion of Iraq, even though he did not support them. He established his dominance when there was an Islamic uprising in Egypt which he captured and either jailed or executed those involved in the militant group. He also avoid being hated, though he was not loved by most, until the revolts and uprisings against him and for Democratic reforms in 2011, which forced him to resign in February 2011.

Even though Hosni Mubarak preferred to not get involved in conflicts, that did not mean that he was not serious about his military. He kept a strict and restrictive regime for his soldiers. They were well trained and ready for combat if it ever arose. Hosni Mubarak demonstrates the skills of the lion and the fox as well. He demonstrated the fox by avoiding conflict with United States, and he demonstrated the lion by capturing the Islamic uprising. In conclusion, Hosni Mubarak is the best pick I could find for the African Machiavellian leader of the modern world. He displays some of the same principles as were established in ‘The Prince’.

Last, but not least is Hugo Chavez, the president of Venezuela. He is very popular in his country and all across Latin America. He gained this popularity through his support and fighting for of solidarity and human rights. According to a 2010 OAS report, his series of Bolivarian Missions have led to achievements in addressing illiteracy, healthcare and poverty as well as benefitted economic and social advances.

He even takes this propaganda as far as ordering for revamped military, and more military reserves. He had enough power from popularity that he had the term limit abolished in Venezuela, which means that he will be in power until he is either overthrown until he resigns, or until he dies. Hugo Chavez, unlike the other leaders on this list, acts as if he is solely the lion. I can not see the fox in any of his tactics, ideas, or actions. In conclusion, Hugo Chavez is a very propaganda driven president that can be seen as reckless or a Latin hero.

Examples of people of the world leader-Machiavellian. (2021, Dec 01). Retrieved from https://studymoose.com/examples-of-people-of-the-world-leader-machiavellian-essay 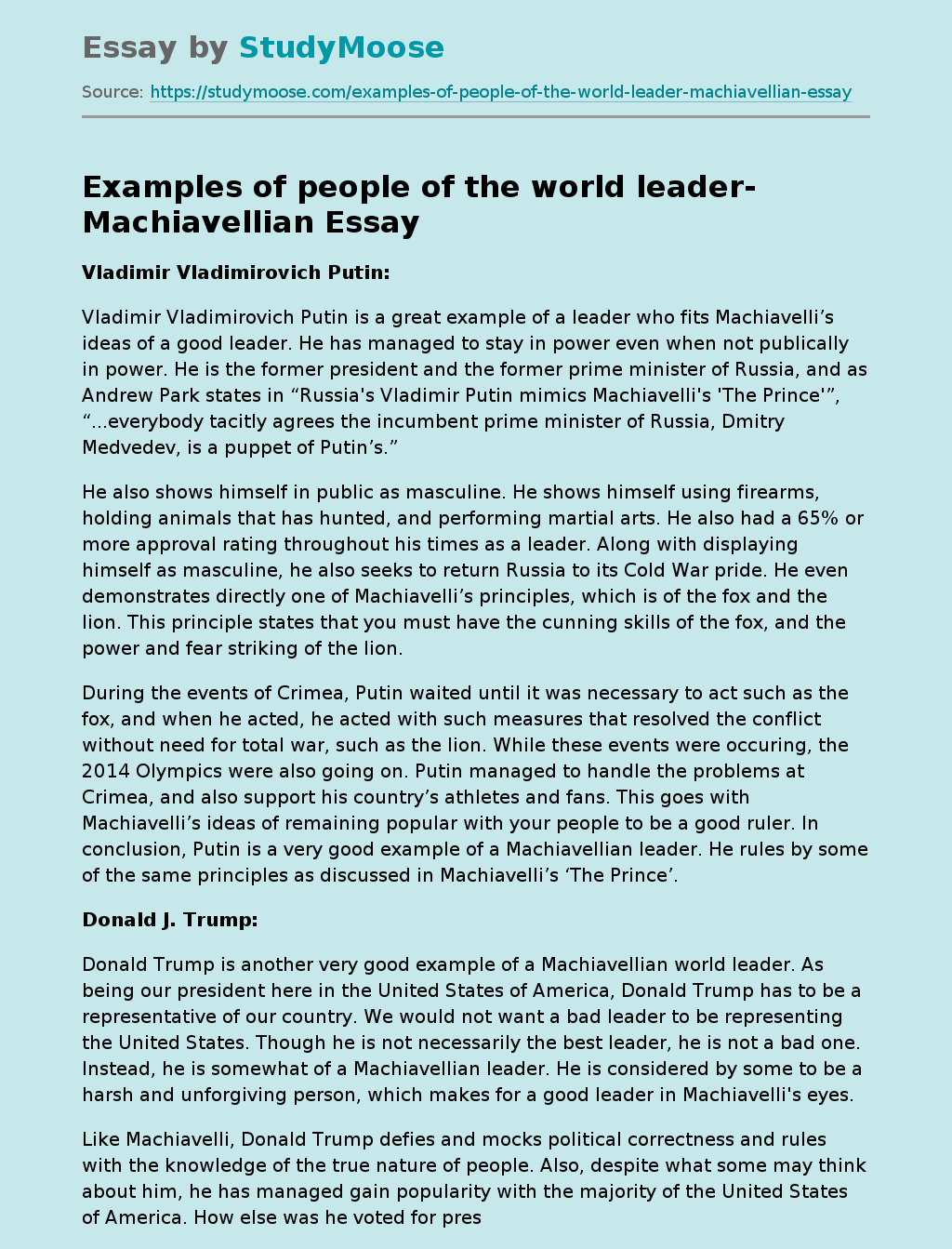